Seahawks concerned about offense after 6 quarters of failure 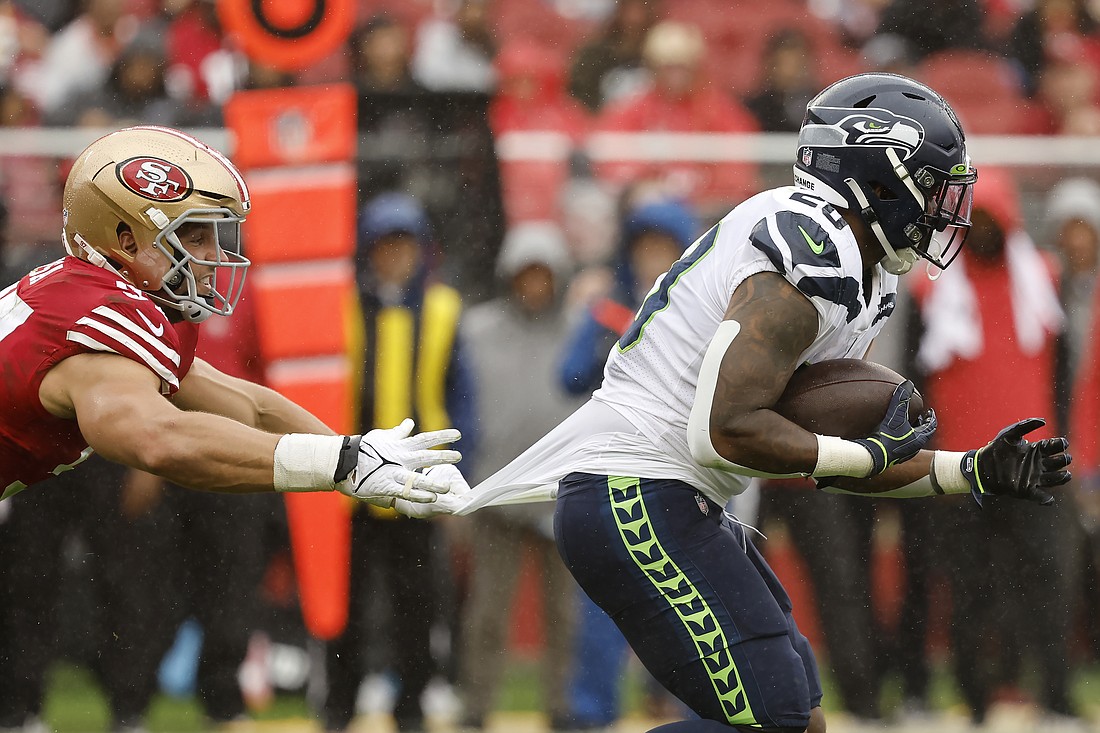 RENTON, King County — The concerns about the Seattle Seahawks going into the season centered on the offense.

Sunday provided an example of why those worries were legitimate. The Seahawks' struggles continued after an unproductive second half during their season-opening win over Denver.

Seattle's 27-7 loss to San Francisco probably should have been expected. Coming off the emotional high of beating the Broncos and Russell Wilson in his return to Seattle, a letdown was probable.

No matter Seattle's emotional state, the offense has clear problems. Seattle hasn't scored an offensive point since the second quarter of the opener. Its run game is mostly nonexistent. Geno Smith's performance at quarterback has been serviceable, but also lacking the big plays the Seahawks relied upon in the Wilson era.

And when Seattle finally put together a sustained drive in the second quarter against the 49ers, the baffling decision to call a pass by running back DeeJay Dallas blew up on the Seahawks and ended with a deflating end-zone interception.

"There's some real solid things, but we've got to get the running game a more active part of the game, and in this game we needed to take what they were giving us more so," Seattle coach Pete Carroll said Monday.

Carroll said his team should have let Smith throw more often with the 49ers focused on stopping the run. He said there was concern about how rookie offensive tackles Charles Cross and Abraham Lucas would hold up against the 49ers' pass rush.

"We didn't want to open it up and expose the tackles any more than we had to. So that all kind of fit together," Carroll said. "But they're holding up. They did a nice job in general. Geno's in command of what's going on, he's real accurate with his decision-making. I think it's just more freely taking advantage of what's going on rather than being concerned about our ability to hold up."

The Seahawks' red-zone and goal-line defense has been exceptional. San Francisco was 2 of 5 on red-zone trips on Sunday and 2 of 4 inside the Seattle 10. In the opener, the Seahawks held Denver to 0 for 4 in the red zone and 0 for 3 inside the 10. That's still a lot of scoring chances Seattle is surrendering, but it is an early positive.

Stopping the run has been a problem. Denver rushed for 103 yards in Week 1 and the 49ers followed up with 189 yards rushing on Sunday. Dating to last season, the Seahawks are 4-8 in games when opponents have rushed for at least 100 yards.

Rookie cornerback Tariq Woolen looks like the next top defensive back to come through Seattle. Woolen appeared to allow only one catch in coverage against the 49ers, cleaned up the penalty issues he had in the first week of the season and blocked a field goal that Michael Jackson returned for a touchdown.

Offensive coordinator Shane Waldron seemed to make all the right calls for the first 30 minutes of the season opener against Denver. In the 90 minutes since, Seattle's offense been a mess. In the second half against Denver and both halves against San Francisco on Sunday, the Seahawks have gained a total of 250 yards on 68 plays, a 3.7-yard average. Seattle has held the ball for barely 30 minutes over those six quarters.

Left guard Damien Lewis has a deep thigh bruise that knocked him out of Sunday's game. Defensive lineman Shelby Harris has a glute muscle injury that limited him to just a handful of snaps against the 49ers. Carroll said the next few days will be key to see if either can play this week.

56 — The Seahawks are averaging 56 yards per game rushing, worst in the NFL. Seattle has attempted a mere 33 running plays, unacceptable for a team that prefers a run-first attack. When backup Travis Homer plays more snaps than starter Rashaad Penny, that's a problem.

Seattle will host Atlanta on Sunday. After that, the Seahawks play three of four games on the road.