A Cascadian-conscience moment at Semiahmoo 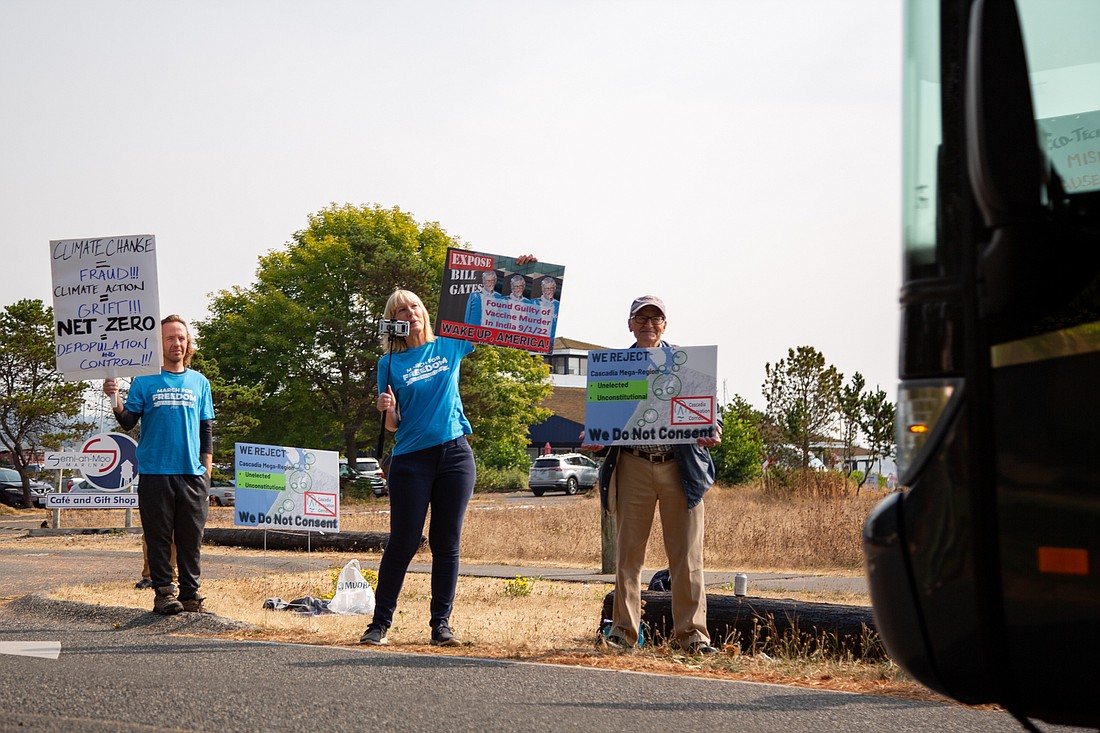 SEMIAHMOO — It seemed like such a simple question for the gaggle of protesters outside the “Cascadia 2050 Vision” conference Monday morning.

Are you opposed to Cascadia, or just vision?

The answer, it turns out, is both — but it’s quite complicated, in a Lyndon LaRouche sort of way.

After 15 minutes of questions and nonanswers from the protesters (odd to a news vet who is accustomed to protesters having a discernible talking point), it quickly became clear that this group was on hand chiefly to dog the Interglobal Master of All That is Evil.

That would be Bill Gates, dark lord of the “Secret Agenda.”

Sure enough, within about 10 minutes, one of the protest sentinels excitedly pointed to an approaching dot in the sky.

The private chopper alighted in a nearby field, and someone who appeared to be Bill Gates got out, and into a waiting SUV. The protesters, demonstrating the difficulty of running while holding a sign overhead noting Gates’ apparent conviction on homicide charges in India, made a lemming-like advance, shouting things such as, “You’re not going to get away with it, Bill!”

Proud moment for all Whatcom-kind, although at least one protester did confess to being from Seattle. 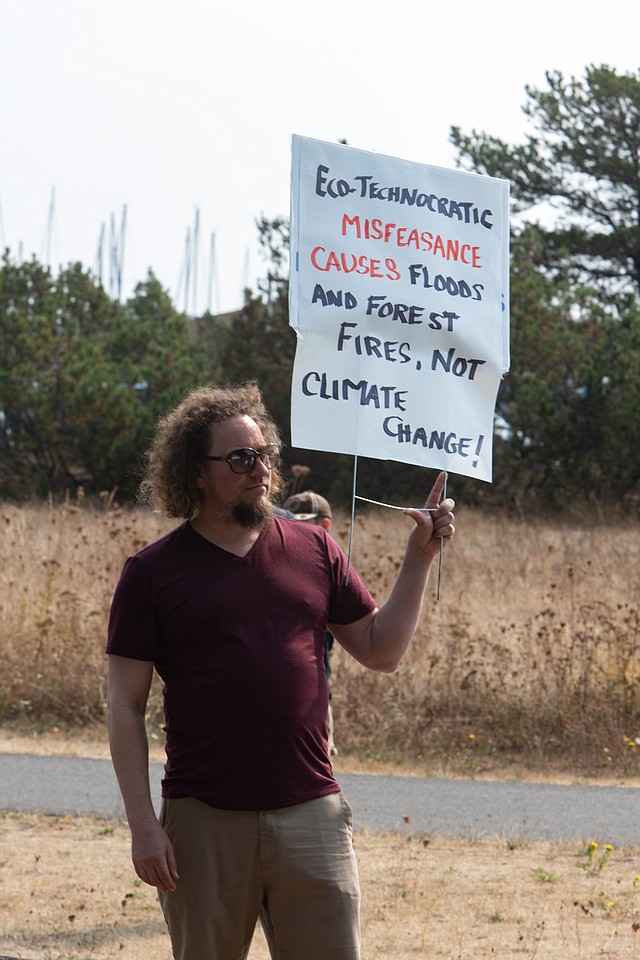 In any case, further time spent chatting up the folks on the line about the coming perils of inter-global, universal government; the war on cars via the “Net Zero” agenda; the UN complicity in the people-removing COVID-19 virus — and the predictable resulting “vaccine” that is slowly wiping out even more of the masses, all to create more breathing space and elbow room for the Global Elites — I couldn’t help but get caught up in it.

What can I say, they played on my inner contrarianism.

The group managed to persuade me that the global conspiracy to dehumanize humanity was not only real, but very possibly going into a Stage Four development phase right behind us, next to a stack of spa towels at the Semiahmoo Resort.

I should expect lots of talk about problems with climate change, “fully debunked 10 years ago,” according to my newfound compadres. And there would be hype about mass transportation, apparently of particular concern to one protester who said: “I get nervous when Nazis start building trains.”

Full disclosure: In my discussions, we never resolved a deeper problem — namely, that due to the word “Cascadia” in our newspaper’s name, every member of the group was convinced we are a secretly funded tool of the dread Gates Foundation, which is so secret that not even I got the memo. We set this aside for the moment in the interest of the greater bad.

Surging with fresh, body-on-train-tracks passion, I made my way to the conference front doors, feeling devilish pride that I had become a double agent for the grassroots resistance.

I sat down and braced myself for opening remarks by former Gov. Christine Gregoire, one of the organizers of these anti-humanity fests, now six years in the running.

Have to say, she’s a clever one. Having dealt with Gregoire, and others in the room, for decades as a reporter, she had never allowed a single crack to form in the façade suggesting she was essentially a smart, capable, public-minded leader, who spent a lot of time in her retirement years working to hasten research on cancer and whatnot. So sly.

She welcomed a crowd of some 350 like-minded Cascadia mega-region, anti-gas globalists, who obviously felt relaxed at being, at long last, among their own kind, downing portabello mushrooms and cod cakes among fellow travelers, with no need to put on the business-, education- or government-leader masks.

But then as it often does, or at least used to, some reality set in. Next up on the stage was Henry Cagey, council member of the Lummi Nation, who issued a warm welcome to the attendees, noting that many in the room had worked passionately to protect the rights of his people.

Cagey said changes in the environment are felt daily in disappearing salmon runs and other traditional ways of life.

“We’re feeling the changes the most, just in our lifetimes,” he said. “Feeding our people has been very, very hard to do. We’re here to help.”

And to be honest, it really went on like that.

Gates, the slumping Grand Dragon of the Globalist Satanic Cabal, took the stage and described progress in curbing the impacts of climate change. Not to be hypercritical, but when he got deep into carbon sequestration, even my newfound compatriots outside the doors likely would have dozed off.

So it went. For this newly appointed revolutionary, all disappointing. Make no mistake: Some of the protest-targeted titans of industry were here (they sponsored it, in fact), trying to keep the money rolling in — and no doubt seeking some greenwashing-cred cover for same. Frankly, this conference on Cascadian concerns did seem more global in focus than a regional affair. And a rep or two from labor would've been nice.

But clearly the bigger-picture, world-domination stuff happened in private, over cocktails, in booths to which we, in spite of our obvious Gates Foundation ties, were not invited.

The rest of the conference, near as I could tell, was dominated by upper-level folks trying to find regional solutions to enhancing the cross-border economy, protecting the environment and other lofty goals. Sort of the norm for these things.

The stated aim for the organization is that these problems are all better solved by people and institutions working together, rather than separately.

Seriously, who in their right mind is going to believe that?