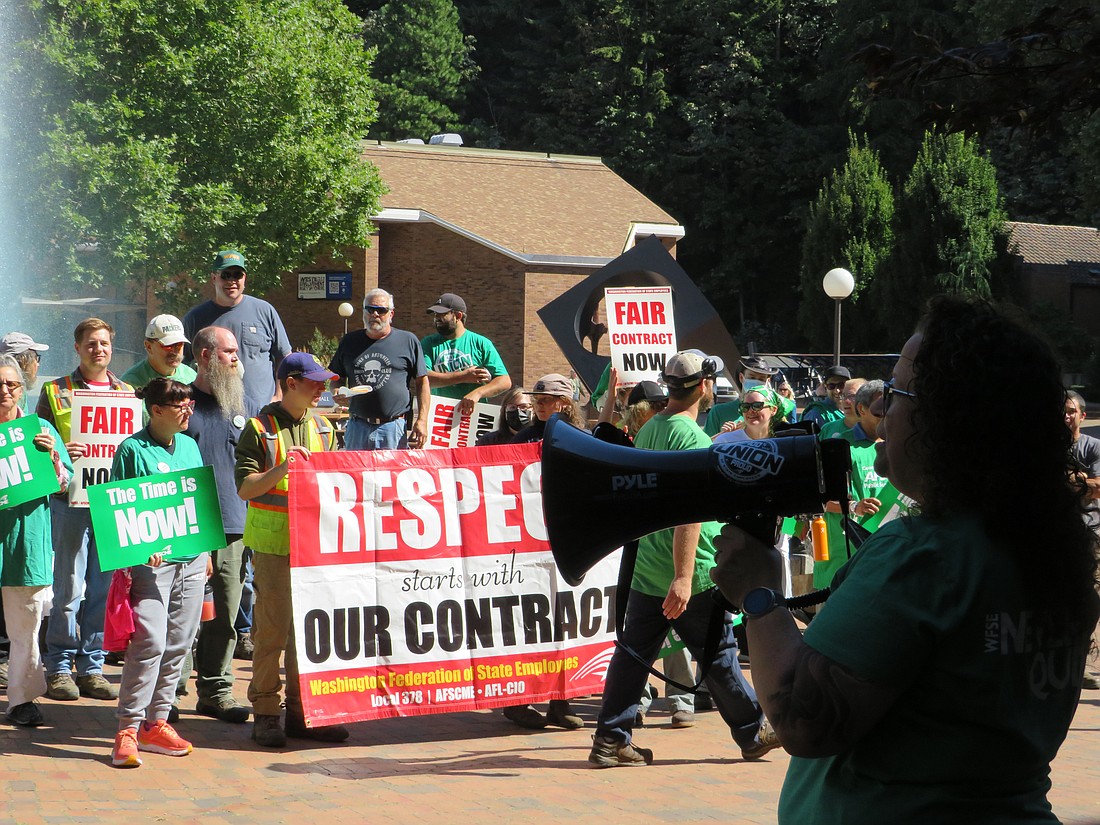 Organizers and rank and file union members marched from Red Square to the office doors of Western President Sabah Randhawa, who was unavailable.

Contract negotiations between the Washington Federation of State Employees (WFSE) and the university began immediately after the rally ended, with union representatives fighting for an increase in staff minimum wage from $15 an hour to $23 an hour and for each staff member to receive at least a 5% raise.

“I think we sent a message without needing to talk,” WFSE Local 1381 President Ryan Cullup said before negotiations began. “We’ll talk in the negotiations; that’s where that should land. We just wanted to show who’s here, and that this contract actually means something.”

Negotiations between union representatives and the university began at 1 p.m. Tuesday in the Viking Union building, and were expected to last late into Tuesday night. 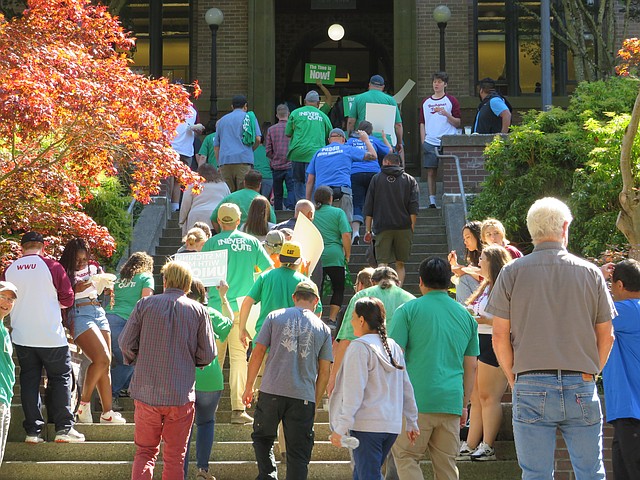 WFSE negotiates on behalf of classified staff who fill roles such as custodians, maintenance workers and clerical workers at Western.

Cullup said the union used M.I.T.'s living wage calculator to determine the new $23 minimum for their workers. The cost of living adjustment (COLA) is 5.9% for 2022, according to the Social Security Administration.

Currently, Cullup said some custodians make the minimum wage of $15 an hour — $31,200 annually for full-time work — and are forced to find second jobs to afford to live in Bellingham.

He said he routinely provides members with local resources, like the Opportunity Council and the Bellingham Food Bank, to receive assistance, and many qualify for food stamps. Some members, Cullup said, have even donated blood plasma at a local BioLife facility to get by.

“Make it so my people don't have to get their blood sucked to pay for food,” Cullup said.

Suzann Finch, a program coordinator for the Financial Aid department, has been working at Western for 23 years. She said that while it’s hard to be optimistic about the possibility of an outright raise, the turnout of hundreds of union members did spark some hope.

“I didn’t think there’d be this many people here,” Finch said. “We’ve had meetings and rallies in the past where there weren’t very many people showing up. So, I’m not sure what’s getting people more engaged, but it’s wonderful.”

The presidents from the WFSE, Public School Employees (PSE) and the Professional Staff Organization at Western brought forward concerns over compensation, employee morale and the future of their fields at a Board of Trustees meeting on Dec. 10, 2021.

“Instead of being a feature employer in this area, we have become a training ground,” said Brandon Taylor, the past president of the local WFSE, at the meeting. “People come here and get a few more extra years of experience and then they go to the outside because they can make two to three times the money.”

Classified staff compensation is based on a state range assignment defined by the Washington State HR Classified Job Listing. WSFE is negotiating with Western to provide additional pay above the state guidelines due to the higher cost of living.

Another issue union presidents raised at the meeting last December was the devaluation of classified staff.

When the management of the university determines that a job position is paid too high, it is reclassified as a lesser-paying job. Therefore, a new worker makes less at the same position than the worker before them, the union argues.

“When a job is vacated, what is happening most of the time now, is that job is moved to a lower classification,” Cheryl Mathison, former PSE president, said last year. “It allows them to hire people with less skills. People are afraid to go and try and get their jobs reclassed to a higher class because they're afraid their job is going to be reduced.”

Mathison was the department manager of the Health and Community Studies Department of Woodring College of Education and recently passed away, according to the university.

While a decision has not been reached between the unions and the university, Cullup said the unions are staying optimistic.

A previous version of this story misstated Cheryl Mathison's position as the department manager of Woodring College of Education. The late Mathison's position was department manager for the Health and Community Studies Department of Woodring College of Education. The story was updated on Sept. 11 at 1:42 p.m. Cascadia Daily News regrets the error.