'Families are pressing on or simply moving away with memories' 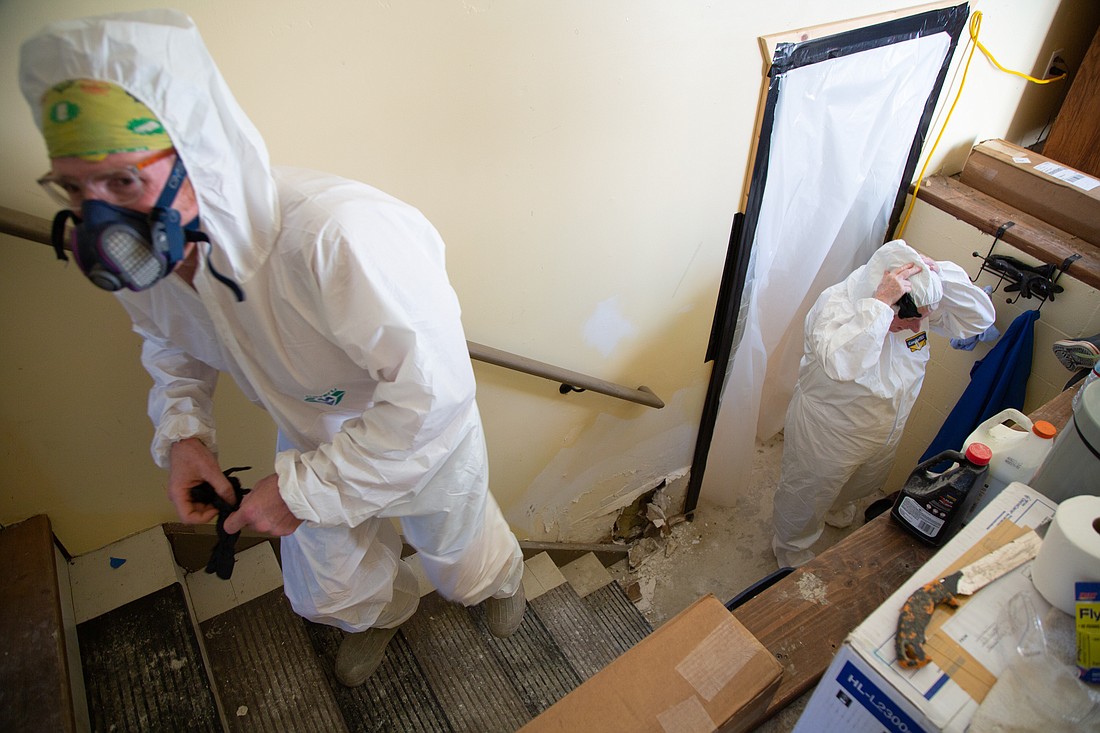 Son Levi Brown, left, and mother Cheryl Brown don hazmat suits and respirators to walk into the basement of their home in Nooksack on Aug. 25. The Browns' home was flooded and filled with naturally occurring asbestos from Sumas Mountain last November. (Hailey Hoffman/Cascadia Daily News)
By JULIA LERNER
Staff Reporter

NOOKSACK — Cheryl Brown’s home is filled with memories: yearbook pictures of her grandkids on the refrigerator, furniture for her aging parents in the living room, dog toys from her son’s three large dogs on the floor. Her home also has personal respirators for her family hanging in the hallway, a box full of hazmat suits in various sizes and buckets of bleach solution at the bottom of the stairs.

When last year’s catastrophic floods hit Whatcom, floodwaters and sediment from the Sumas River, which winds through her backyard, filled Brown's home. After the waters subsided, she discovered several feet of asbestos-laden sediment in her recently renovated basement.

“We rebuilt the whole basement in 2020 — new drywall, appliances, cupboards and everything, so everything is just a year and a half old,” she said. “Everything has to come out now. We’re just pounding holes in the drywall, packing stuff out in double bags and figuring it out.”

The Sumas River is fed by Swift Creek, a sediment-filled creek in East Whatcom that has been transporting naturally occurring asbestos deposits across the region for decades. When November’s floods hit, that asbestos was transported across the county, ending up in yards and homes around Nooksack and Everson.

Asbestos is a known carcinogen that increases the risk of lung disease, asbestosis and mesothelioma, according to the Environmental Protection Agency. Because of the health risks, Brown still can’t live inside her home — now nine months later — and instead resides in a 26-foot trailer with her husband, Larry. Her son, Levi, lives in a 27-foot trailer across the driveway and spends most of his time in his hazmat suit, digging out his parents’ basement and backyard.

“There are thousands of yards worth of [sediment] in our backyard,” Levi said. “October through March, there’s always that possibility we’re going to wake up with 3 feet of water in our house, but now we’ve got this.” 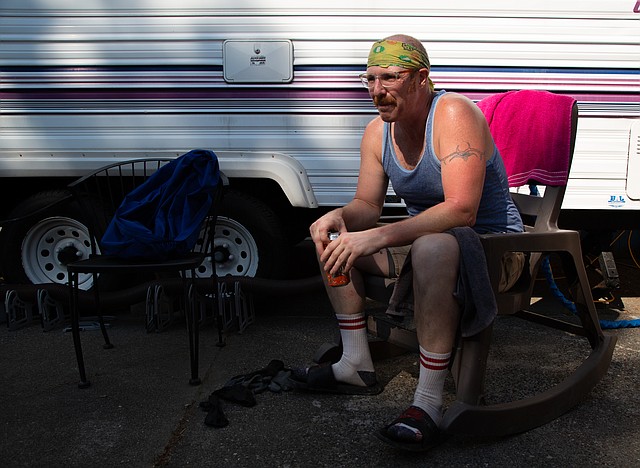 Levi Brown sits outside of his trailer, parked in the Browns' front yard. The family hasn't lived in their home since November. (Hailey Hoffman/Cascadia Daily News) 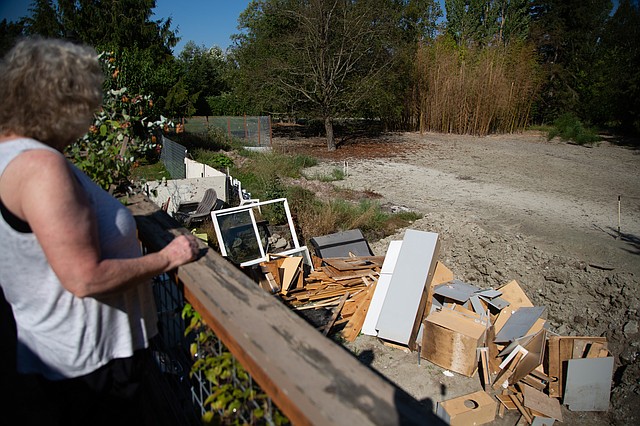 Cheryl Brown overlooks cabinets ripped out from the basement of her home in her sediment-filled backyard. (Hailey Hoffman/Cascadia Daily News) 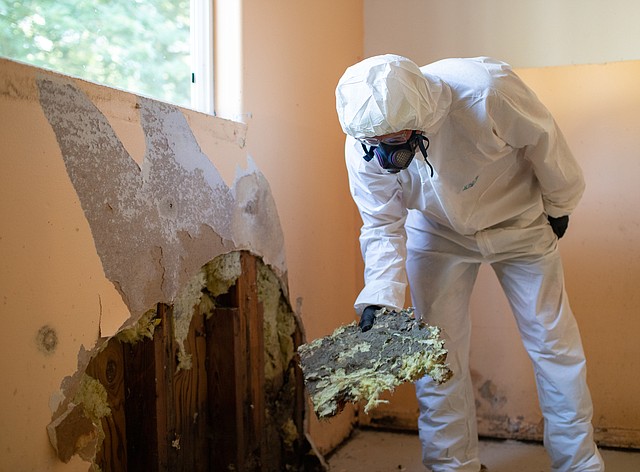 Levi Brown pulls out a moldy piece of drywall and insulation, still damp from November, in the basement. (Hailey Hoffman/Cascadia Daily News)

The family only recently cleared the asbestos from their basement, but the walls still need to come down. The asbestos, which remained wet for several months, allowed mold growth inside the walls and the foundation of the home, which also requires significant mitigation.

The Brown family has been trying to handle the asbestos on their own, as county officials, state offices and federal programs can’t help with cleanup on private properties.

“The county won’t help, the state won’t help and FEMA (Federal Emergency Management Agency) won’t help,” Cheryl said while her dog Sandy sat at her feet. “They say [it's] because it’s private property, but all this asbestos came from the state Department of Natural Resources property from the landslide on Sumas Mountain.”

A slow-moving landslide from Sumas Mountain near the mouth of Swift Creek exposes asbestos deposits that end up in the creek, and then in the Sumas River. Each year, more than 100,000 cubic yards of sediment ends up in the creek — equivalent to the volume of the Whatcom County Courthouse — said Scarlet Tang, from the Washington State Department of Ecology’s Northwest Region office.

Tang said private property owners are responsible for cleanup on their properties, and Whatcom County provides fact sheets and tips from experts on removing the sediment for homeowners who experience flooding.

The cost to remove the sediment has been enormous and continues to grow. The Browns have to pay to remove it all, as well as proper packaging and disposal of the material.

“To do a proper mitigation of the asbestos material in our backyard, it would be at least a quarter of a million dollars per household,” said Levi, who had county officials and clean-up crews out to examine the 1.4-acre property. 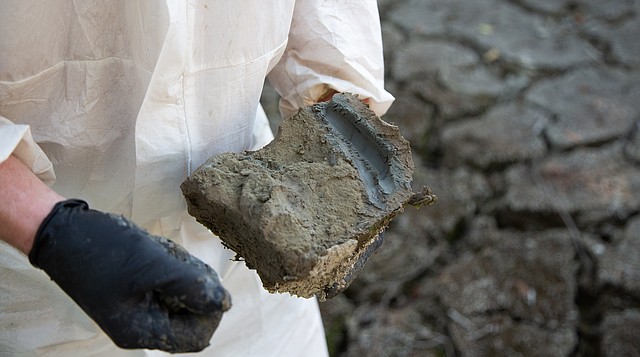 Levi Brown holds a chunk of clay pulled from the family's backyard. All of the sediment was deposited with the flooding, and the paler layer is likely asbestos. (Hailey Hoffman/Cascadia Daily News)

Cheryl said FEMA suggested she apply for a loan from the Small Business Administration, which typically comes with low-interest rates and small payments.

“It’s just another loan and another payment that you have to make to be able to fix something that you didn’t have any part in making unusable,” she said.

Their flood insurance, mandated by their mortgage provider, only covers the structure of their home: not the belongings inside, and not the backyard they affectionately call “the park.”

The park, currently under almost 2 feet of sand, clay and asbestos, brought the family so much joy. The large Japanese bamboo patch, the rosebushes and the family’s maple and cedar trees that dotted the yard have since died, and the picnic table they used for summer barbecues is almost invisible among the debris.

“My sister got married back here,” Levi said. “We called it our little park yard because all the kids in the neighborhood came to play and spend nights in tents.”

In the weeks following the flood, Levi had samples of the sediment sent out for testing. Results from testing sediment in the backyard showed high concentrations of asbestos, with carcinogenic fibers making up between 30% and 70% of the samples.

“I remember the 2020 flood ruined the recliner my dad peacefully passed away in,” Cheryl said. “We had about 8 inches of water [inside] that required a whole tear-out and complete replacement.”

“The project will reduce the amount of asbestos carried by Swift Creek by capturing asbestos-bearing sediment coming down from Sumas Mountain and safely managing it,” Tang said. “It will also reduce the likelihood of flooding by creating more stable conditions downstream in the floodplains of Swift Creek and the Sumas River.” 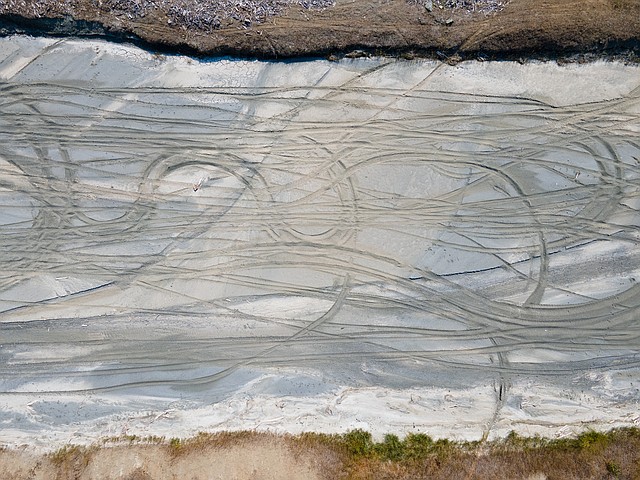 The Brown family says it’s too little, too late.

“We mourn the new home Larry and our children and grandson helped create after the 2020 flood,” Cheryl said. “We mourn the loss of the park where many family and neighborhood events happened, not only for us but those before us ... We mourn the lack of support by the agencies who have resources and manpower to alleviate the loss in the park.” 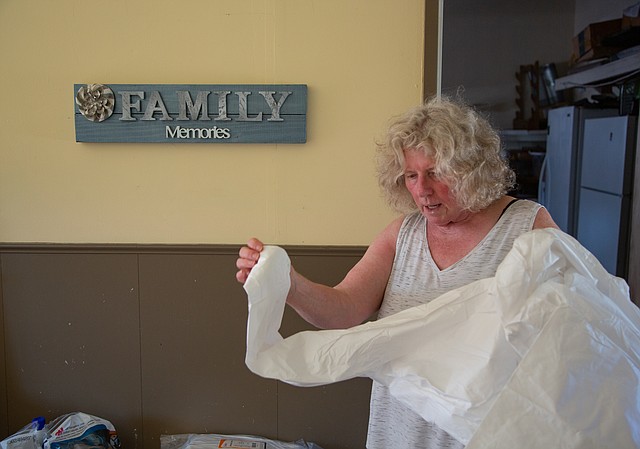 Cheryl Brown pulls on a hazmat suit in the hallway of her home. (Hailey Hoffman/Cascadia Daily News)

Cheryl said the family feels grief for what they have lost, but looks forward to creating more memories with her children and grandchildren.

“We do not mourn alone,” she wrote in a message. “So many families are pressing on or simply moving away with memories, which we hope don't fade ... and through new experiences, like demolition in a hazmat suit in the night, seeing progress even as it means removing the stuff that is the making of the memory.”

“We’re the Browns, we’ve always been the Browns and we get things done,” he said. 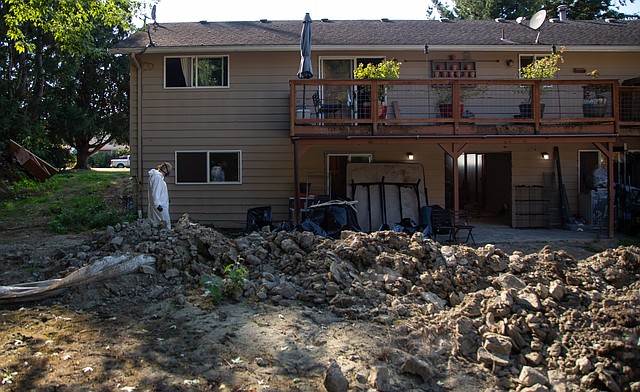 Levi Brown walks around the back of the house, with asbestos in wake. (Hailey Hoffman/Cascadia Daily News)
Have a news tip? Email newstips@cascadiadaily.com or Call/Text 360-922-3092