This summer's Washington state fire season saw the lowest acreage burned in a decade. That's a relative success for fire management, state officials say, thanks largely to a wet and rainy spring.

It was a welcome reprieve. In the past 10 years, Washington has experienced its three worst fire seasons in recorded history (2015, 2020 and 2021), according to the state Department of Natural Resources.

While fires in the Western Cascades may not be as common, researchers and officials are trying to prepare communities for the inevitable large fires that are increasingly likely as the climate becomes warmer and dryer.

On the cool, cedared slopes of the Western Cascades, fire looks very different than it does in eastern Washington. Understanding fire locally is essential to know how to prepare for it, said Michael Medler, an environmental studies professor and geographer at Western Washington University who specializes in wildland fire mapping.

The big problem: fire in the Western Cascades is rare, Medler said.

“As a geographer, to me, these are all questions about spatial and temporal scale. And humans are not very good about long timescales and big spaces,” Medler said. “It's very hard for homeowners and communities to plan around rare events.”

In the east, smaller fires happen more frequently, Medler said, while in the west, infrequent fires are magnitudes larger. 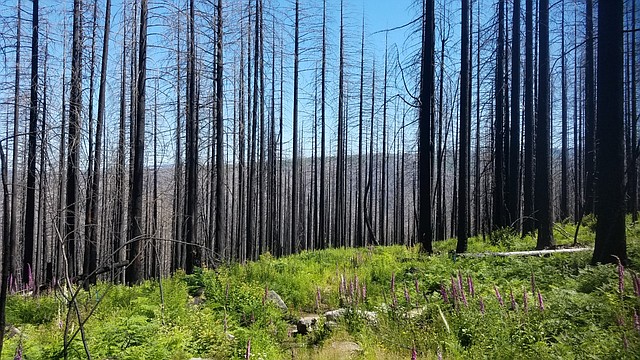 Green flora sprouts up in a section of burned forest. (Photo courtesy of Brian Harvey)

Those trends, or fire regimes, determine how fires can be managed. Fire suppression, which the U.S. adopted as its main form of fire management in the early 20th century, led to unburned fuel piling up on the east, resulting in more severe fires when the flames eventually caught up.

But in the west, where significant fires typically don’t return for centuries, that fuel buildup was standard. The Western Cascade forests have some of the highest biomass in the world, said Brian Harvey, a professor at the University of Washington School of Environmental and Forest Sciences.

Fires in the east historically ranged from 2,500–10,000 acres. In the west, there is historic precedent for fires burning more than 100,000 acres, Harvey said. The 1902 Yacolt Burn, the Tillamook Fires in the mid-1900s and the Labor Day Fires in 2020 are all examples of infrequent but intense western fire events.

Large fires like those follow a three-part recipe. A hot, dry summer, an ignition and a strong easterly wind all need to line up to create the perfect storm, Harvey said.

“As the climate is warming and conditions are drying, we're essentially opening the window of time where all those ingredients could line up,” Harvey said.

Washington is also getting warmer. Since 2000, the average long-term temperature across the state has risen by almost 2 degrees Fahrenheit, according to NOAA’s 2022 Climate Summary. From 2015–20, the number of “hot days” in western Washington was above average, and 2015 was the hottest year on record.

There are some large uncertainties in knowing how western Washington’s wildfire regime will respond to climate change, but the recipe will stay the same, Harvey said. 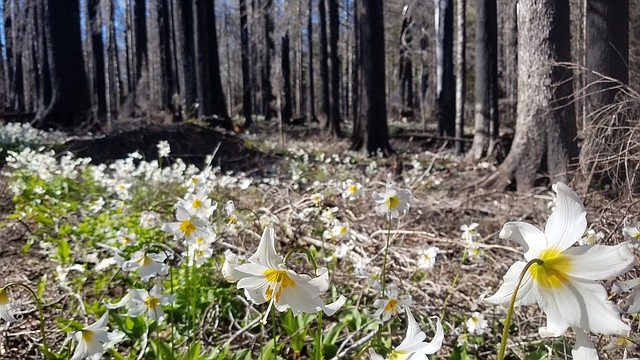 The biggest wildcard is the strong easterly wind that blows and stokes fires into infernos, Harvey said. With increased human growth and population density, ignitions will either stay the same or increase, he said.

Pacific Northwest forests are resilient to fire, and while they do burn intensely, the fire also creates an important, fresh start for different species.

The rarest stage of forest development in the Pacific Northwest is not old growth, it’s post-fire habitat. In freshly burned areas around the Bolt Creek Fire, fireweed — a flowering pioneer species that grows in disturbed, burned areas — is already sprouting up through the ash blanketing the forest floor, Harvey said.

The explosion of plant diversity in fresh burn areas is an important stage for forest lifecycles.

“There's already fireweed, vine maple and things re-sprouting and bouncing back while the [Bolt Creek] fire is still burning elsewhere,” Harvey said. “Fire is disruptive ... but it's also absolutely necessary and critical for these forests.”

While wildland fire is an accepted reality on the east side of the state, it’s not on everyone’s radars in the west, Medler said. Getting people prepared for fire has been a slow-moving process. 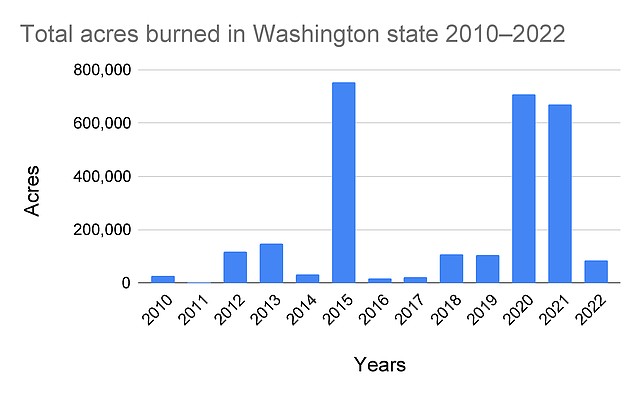 As human populations grow, urban environments spread into undeveloped areas. That mixing zone, where buildings and communities intersect with undeveloped areas, is called the Wildland Urban Interface (WUI), and because communities keep expanding, that interface is constantly changing.

WUI is used to understand where communities are most at risk. Prescribed burning, clear-cutting and thinning have been proposed to help reduce fire risk around towns in WUI areas. But because of fire suppression practices, if the U.S. were to treat all the wildland surrounding human centers, it would be millions of acres behind, Medler said.

Instead, his work has aimed to present a more tangible target to help focus resources and support on specific areas.

“Let's buffer every town, every community, every place with a name in the western United States, and then overlay that with where we know we have problems,” Medler said.

If communities thinned, burned or removed vegetation within a quarter-mile buffer around a town, it would prevent fire from jumping from trees into the community, Medler said. By targeting only the buffer area, the number of acres needing treatment drops from 4 million to 84,000.

So far, his work hasn’t done analysis around Bellingham. Having crews make that buffer would create jobs and local expertise that could help coordinate a fire response, Medler said.

Right now, people don’t think large wildfires are an immediate threat for western Washington, but it is inevitable, Medler said.

“Our forests are incredibly fire resistant a great deal of the time. That does not mean they're fireproof,” Medler said. “When the conditions are right, they are made of wood and they will burn. Guaranteed.”

Maleng, who has worked in the district for 30 years, tells people every chance he can to visit Firewise USA, a federal neighborhood-based program that helps homeowners prepare for fire. This season saw small fires that didn’t grow to anything large, but if a future fire starts to threaten buildings, District 16 has limited resources and would have to make difficult decisions about which houses to protect, he said.

With the Firewise program, homeowners can access resources about how to bolster their homes. Removing all flammable vegetation within a 5-foot buffer around the house and removing debris like pine needles and leaves from roofs and gutters can all help reduce risk.

“Help us help you by making it a more defensible space,” Maleng said. 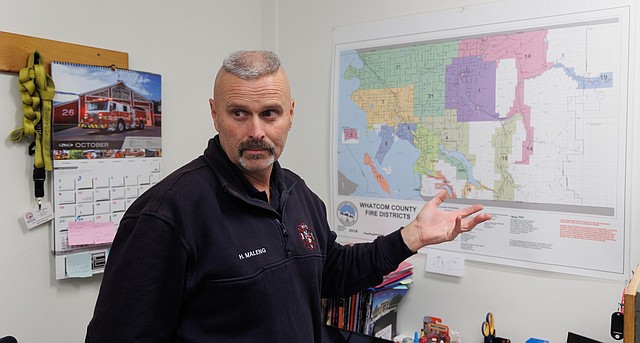 Fire District 16 is an all-volunteer force. As fire seasons become longer and hotter and the risk of large fires increases, fire districts like Maleng’s will need to see more equipment and more people, he said.

Whatcom County fire districts have a mutual aid agreement: If one district needs extra hands, nearby stations send help, Maleng said. But that sharing can only go so far if multiple fires happen at the same time.

Now that rain has arrived, Maleng is bracing for the flood season. But on Oct. 21, he was keeping a watchful eye out for stray fires until the rains had dampened things thoroughly, he said.

In western Washington, the large fires this region is likely to see are untamable, Harvey said. The question is not about how to stop them, but how to make sure residents have a plan to protect their homes as best they can before evacuating.

“On the west side, it's easy to think it's not a fire-prone ecosystem because it’s relatively rare. But it absolutely is ... just in a totally different way,” Harvey said. “When it does happen, it’s really good to have a plan in place to get people safely out of the way.”