Portland-based writer Omar El Akkad, author of “American War” and its follow-up, “What Strange Paradise,” doesn’t write novels, he constructs messaging objects, and maybe that’s what readers want these days. He is certainly making a good career of it. (Photo courtesy of Kateshia Pendergrass)

Art is more discovered than engineered. Novelists who write to convey meaning rather than to uncover characters, or follow a plot, are for the most part not artists but propagandists. Successful art surprises and confounds everyone, including its creator, because art is wild and constructed not from meaning but from coherence and beauty, which cannot be planned. This beautiful coherence is what gives art its robust morality and what lends many artists their aversion to fashionable politics. Art allows no principle beyond the pursuit of what makes it good and true, and so it cannot be corrupted by an agenda and still be considered art.

This brings us to Portland-based writer Omar El Akkad, author of the plodding, dimwitted, much-praised bestseller “American War” and its schematic, boring follow-up, “What Strange Paradise,” both nominated for various prizes and both widely lauded within the industry. Who is sending El Akkad, and books of similar stripe, into such high places? Not readers, I don’t think, at least no reader who likes novels. But El Akkad doesn’t write novels, he constructs messaging objects, and maybe that’s what readers want these days. He is certainly making a good career of it.

“American War” describes an imaginary future civil conflict and its aftermath. Oil and gas, the object of dispute, serve as rough allegories for race; a promising premise, actually, and once in a while the book flashes with interest as the young protagonist makes her way across a poisoned, perilous landscape. 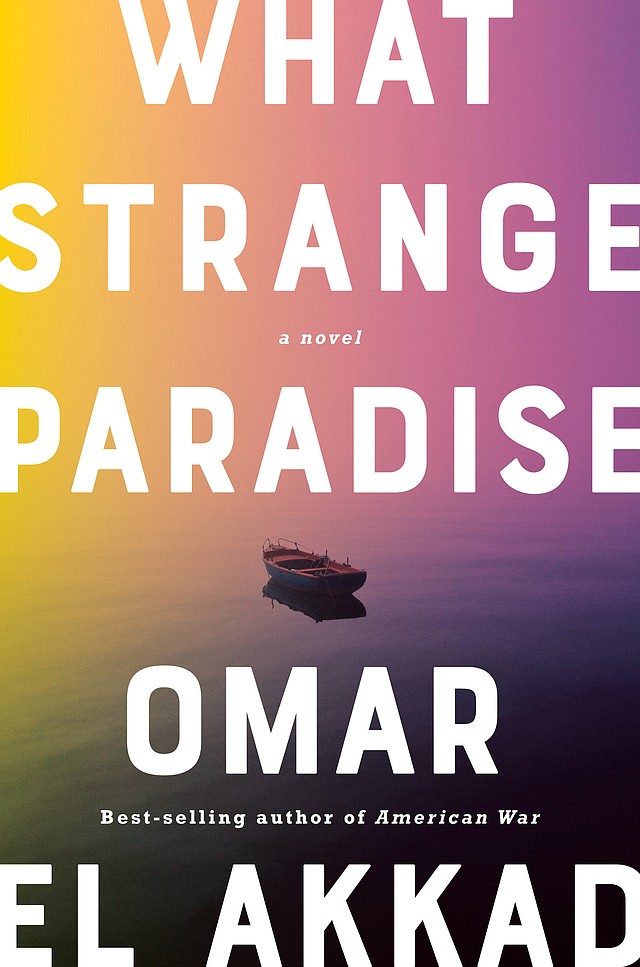 The novel tells the story of 9-year-old Amir Utu, a Syrian refugee. Amir washes up (literally) on a Greek island where he is discovered by Vanna, a teenage girl, who hides Amir in an effort to keep him away from the dehumanizing process the local army has invented to manage such desperate people. (Photo courtesy of Penguin Random House)

But, geez, it’s not good. El Akkad has almost no sense of how to operate a point of view from within a character, which means the action is directed by the writer, not the protagonist. Which means the writer is never surprised by what the character does, which, in turn, means the reader will rarely be surprised either. It is not an easy book to finish.

And neither is “What Strange Paradise,” though it’s only about half as long. The novel tells the story of 9-year-old Amir Utu, a Syrian refugee. Amir washes up (literally) on a Greek island where he is discovered by Vanna, a teenage girl, who hides Amir in an effort to keep him away from the dehumanizing process the local army has invented to manage such desperate people. Amir and Vanna share alternating points of view as the book moves from present to past, from Syria to Egypt to Greece. There is also a long period while Amir and his uncle are on their frail migrant ship, hoping for the best as they drift north across the Mediterranean.

Obviously, this is vital material. Writers have been making epics out of politics and war since before there were novels. There is a welcome diversity among the players, nearly all of whom are migrants of one kind or another and who are outfitted with their own plausible bigotries and attachments.

A reader will be grateful for the portrait of a world that may well be unfamiliar, and may be surprised to see how El Akkad’s refugees are unwelcome even in their own families’ homes. There is a feeling of getting a glimpse, in fact, inside a world-historical situation: that of contemporary migrants and refugees and their scary, unfair lives. And it is certainly the case that El Akkad, who is also a journalist, has an ear for aphorism and the cutting phrase. “Every war is an American war,” we are told. “Only a coward survives the absurd.” About Americans: “No matter the crime,” one character observes, “they will always find themselves innocent.”

The problem with the novel is that it also operates like an aphorism. Not untrue, exactly, just not the sort of truth one goes to fiction to find. Characters lack complexity. Point of view is shallow and uncontrolled. Dialogue is strictly expository. Plot mechanics are shaky and rely on a series of implausible turns. One has the feeling of being led by the nose down every page in order to be force-fed meaning. And where the narrative stalls and fails, El Akkad often works up a run of “beautiful” language, which is often just dumb. “The rain fell vaporous as steam,” we read, to pick just one example from scores.

Which is probably why “What Strange Paradise” is so dispiriting to read. Every passage directs us to think and feel a certain way. But a novelist must trust his reader to distrust simplicity, to seek depth and value strangeness, and to discover meaning in complexity and contradiction. Mohsin Hamid’s recent “Exit West” covers much of the territory claimed by “What Strange Paradise” but is a thrilling, moving story, rich with surprise and oddity. A good book waits unborn inside El Akkad’s novel; maybe it’s just the shadow of this unwritten novel people have been so busy praising.