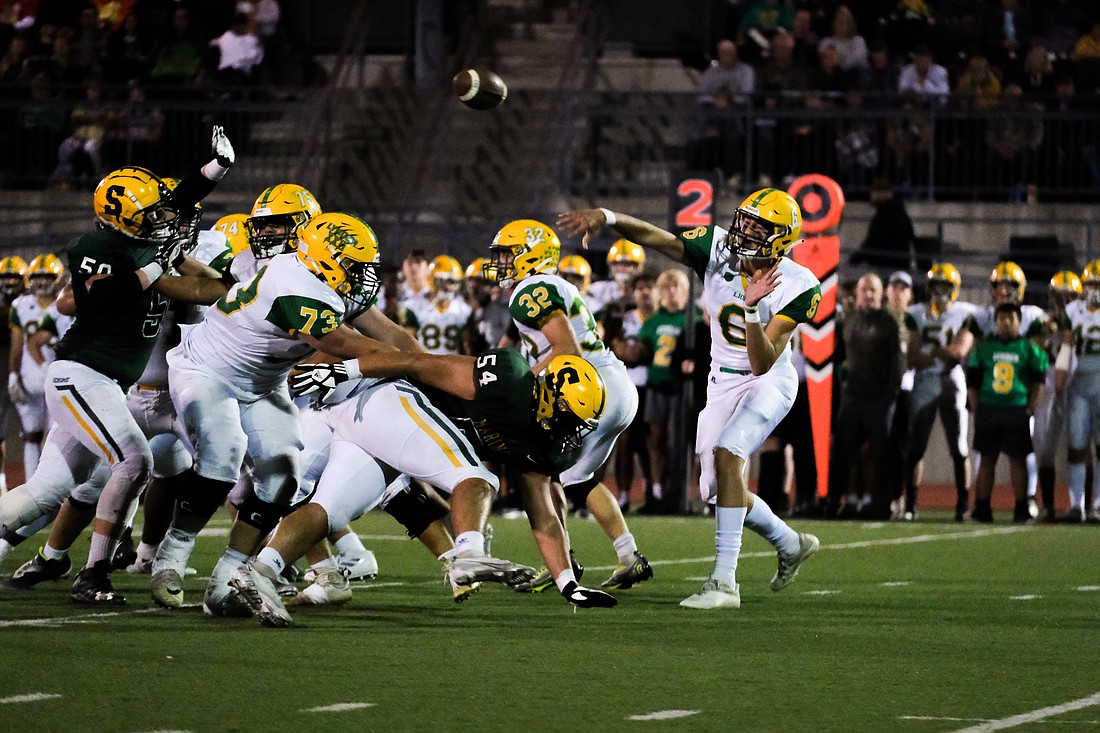 Sehome High School football team loses to Lynden 21-19 on Sept. 30. The team forfeited a Sept. 16 game due to hazing. (Photo by Zack Jimenez)

Trust us. That in essence is what the letter from the Sehome High School principal said in the wake of a reported student hazing, requiring her school to forfeit a football game Sept. 16.

Please stop spreading salacious rumors, Sonia Cole said in a letter to parents. We’ll get to the bottom of it in time.

A full month later, citizens and patrons of Bellingham Public Schools are still waiting. For a group that professes to loathe rank speculation, the district’s highly paid administrators have invited plenty of the same by silently closing the books on the Sehome matter, making no attempt to clear the air.

Among the lingering, legitimate questions:

Were the coach or any players disciplined in any way? Why or why not? Was it all overblown?

Did the district, in fact, get to the bottom of it — and then just shove it all under the fake turf and move on, for the sake of the football record of one of its schools?

Or did it fail to perform due diligence, going back on its word to conduct a full investigation of what for all the world sounds like a disturbing culture of hazing and intimidation in Sehome’s recently resurgent football program?

We don’t know, so you don’t know. And it’s not for lack of asking.

Bellingham schools seem content to just pretend the acknowledged hazing incident — which principal Cole in a Sept. 20 letter to parents described as violating “harassment, intimidation and bullying policies and our athletic code of conduct” — never happened.

Only after repeated questioning from Cascadia Daily News did district spokesperson Dana Smith finally acknowledge on Oct. 5 that the district’s version of an investigation was concluded.

Period, end of discussion. Move along folks, nothing to see here.

The district continues to cower behind privacy rules and laws to discuss the matter even in general terms, in spite of its apparent serious nature. This is, of course, super convenient for the district. It’s also a betrayal of public trust. And a mistake.

Privacy should be honored, but school district administrators know that nothing in those rules prevents them from discussing the Sehome hazing incident in general terms. Concerned citizens are far less interested in who actually did the alleged deed than what, if anything, the deed prompted in terms of a disciplinary response.

And that appears to be nothing, beyond obligatory happy-talk counseling for the team. Given the lack of additional forfeitures, or players or coaches missing from the sidelines (neither of which is apparent), a free pass is the logical assumption for parents and the community. Word on the street is that this is a shut-up-and-move-on scenario — in all the worst ways.

It would be less disturbing if the subject matter was something trivial. Folks laughing these incidents off as boys being boys are ill-informed. Unchecked athletic hazing is serious, and often the symptom of deeper rot.

As a journalist who has covered sports at levels ranging from peewee leagues to the Olympic Games to the NBA Finals, I’ve seen the power of athletics to bring communities together and develop character and leadership skills in young athletes.

I’ve also seen its power to do damage when winning, macho culture and, in the pro ranks, profit, are protected above all else. (See: doping, institutional corruption, sexual abuse and intimidation to the level of personal destruction and suicides.) High schools are nurseries for this culture.

Don’t think the same general factors can’t be in play on our local practice fields. Those are places where, it should be noted, the vast majority of high school coaches give their all, with very little reward, to keep sports focused on the healthy development of young adults.

That’s why the silence here screams so loudly. The takeaway for those involved — and, critically, to anyone who might be tempted in the future — is to just keep it all on the down-low. Honor the omertà. That’s the worst-possible outcome: the secret-society, “Fight Club” aspect of a bullying culture thrives in the shadows and feeds on an us-against-the-world shoulder chip.

Sehome’s football coach, Kevin Beason, a Sehome and Western Washington University alum who may or may not have been aware of a culture of intimidation among his ranks, acknowledged that no discipline had been meted out to that point when his team returned to the field Sept. 22. But he made it worse by saying it was entirely out of his hands, and boasting of his team’s demonstration of “incredible perseverance” — as if what ailed it was somehow not a self-inflicted wound.

But district leadership also failed here. The public reward for accepting the principal’s early plea for calm, which seemed genuine, should have been leadership, via transparency — an explanation of the district’s findings.

It didn’t have to be complicated, or even detailed. Just a respectful public response, perhaps from the superintendent: Thanks for your patience. We can’t get into individual identities, but here’s what we found. Here’s what action we took, and are taking. Here’s why.

If you’re an institution increasingly in need of trust and support from your public, it’s a basic obligation. Fully unmet here.

On the plus side, the district and the principal deserve credit for at least talking about the proper goal. They need to work hard to do the hard work of rooting out any apparent culture of abuse and intimidation in district athletic programs — the sort that leaves some students reportedly choosing to eschew a sport because of what they see as a toxic culture.

We’re aware of the promises of de facto group therapy at practices to make everyone feel welcomed, identify possible future hazing, and to “empower team-building.” Yay, team! All good.

Aside from the obvious questions about why that remedial action is necessary on a youth sports team in the first place, consider: Personal growth and new cultures sprout best from a clean slate. And if we have learned anything about righting wrongs and changing cultural courses, it is that the process begins with public accountability.

For that, we are all still waiting.