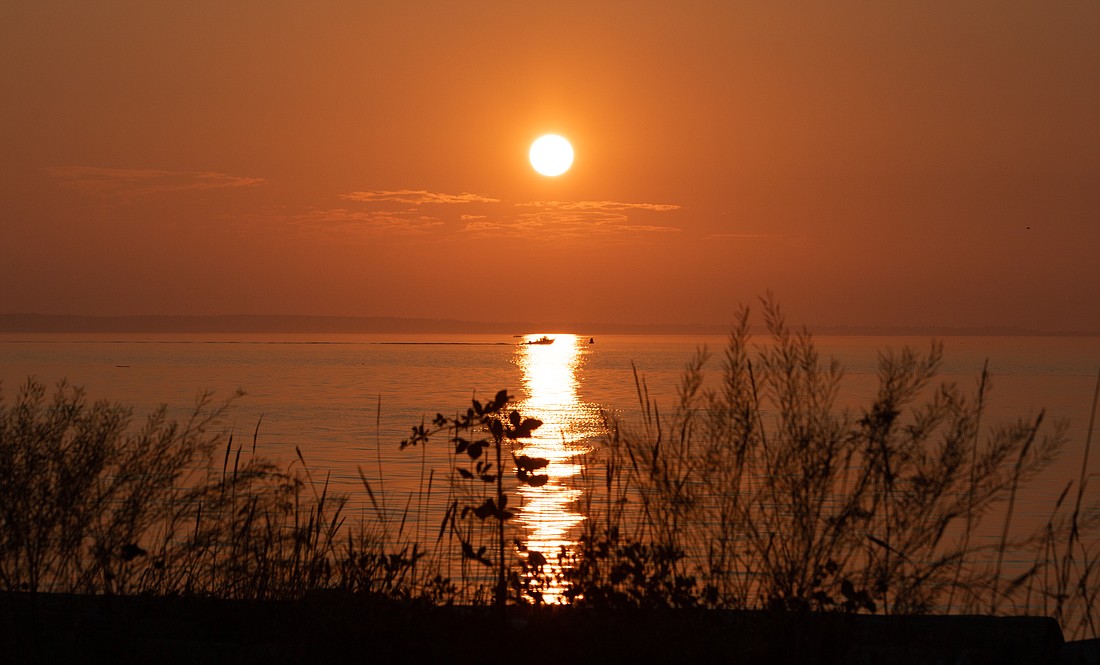 The sun sets a blazing orange from residual wildfire smoke as seen from the Semiahmoo shore on Sept. 12. (Hailey Hoffman/Cascadia Daily News)
By CDN Staff

Ongoing wildfires across the state have caused smoky skies and unhealthy air quality around Whatcom County this weekend.

The average Air Quality Index (AQI) in Bellingham reached 107 Saturday afternoon, in the unhealthy for sensitive groups range.  A “good” AQI is between zero and 50.

The highest readings Saturday afternoon were 159 on the western shore of Lake Whatcom, 156 south of Acme and 155 in Sudden Valley. Regional air-quality maps showed levels as high as 400 on Saturday afternoon in isolated areas of the Cascade foothills.

Smoke continues to linger west of the Cascades as above-average temperatures and below-average rainfall have fueled six large wildfires across the state, and nine total in the Pacific Northwest.

It’s been a relatively mild year for wildfires and wildfire smoke. On Oct. 12, Commissioner of Public Lands Hilary Franz announced just over 140,300 acres have burned around Washington state — the fewest number of acres burned in a decade.

But easterly winds and a slew of fires in northwest Washington are keeping the smoke in the region.

The Bolt Creek (13,800 acres) and White River (14,400 acres) fires both west of Everett, along with the Chilliwack Complex (7,300 acres) and NW Pasayten Complex (18,000 acres) fires in the North Cascades National Park near the Canadian border, have pushed smoke to Whatcom County.

The Washington State Department of Ecology’s Air Monitoring Network predicts smoky skies sticking around Bellingham through Sunday before clearing up on Monday, while north Whatcom County is expected to reach unhealthy levels Tuesday and Wednesday as smoke pushes further north.

Seattle meteorologist Cliff Mass predicts the apex of smoke in western Washington to arrive Sunday. Bellingham is expected to reach temperatures in the mid-70s Sunday.

"But there will be cooling (into the upper 60s) next week and gradually reducing smoke," Mass said in his Oct. 15 blog. "Rain starting next weekend is a very sure thing. A week from now the warm, smoky summer will be over."