'Tagging' nature: Not cool, at any level 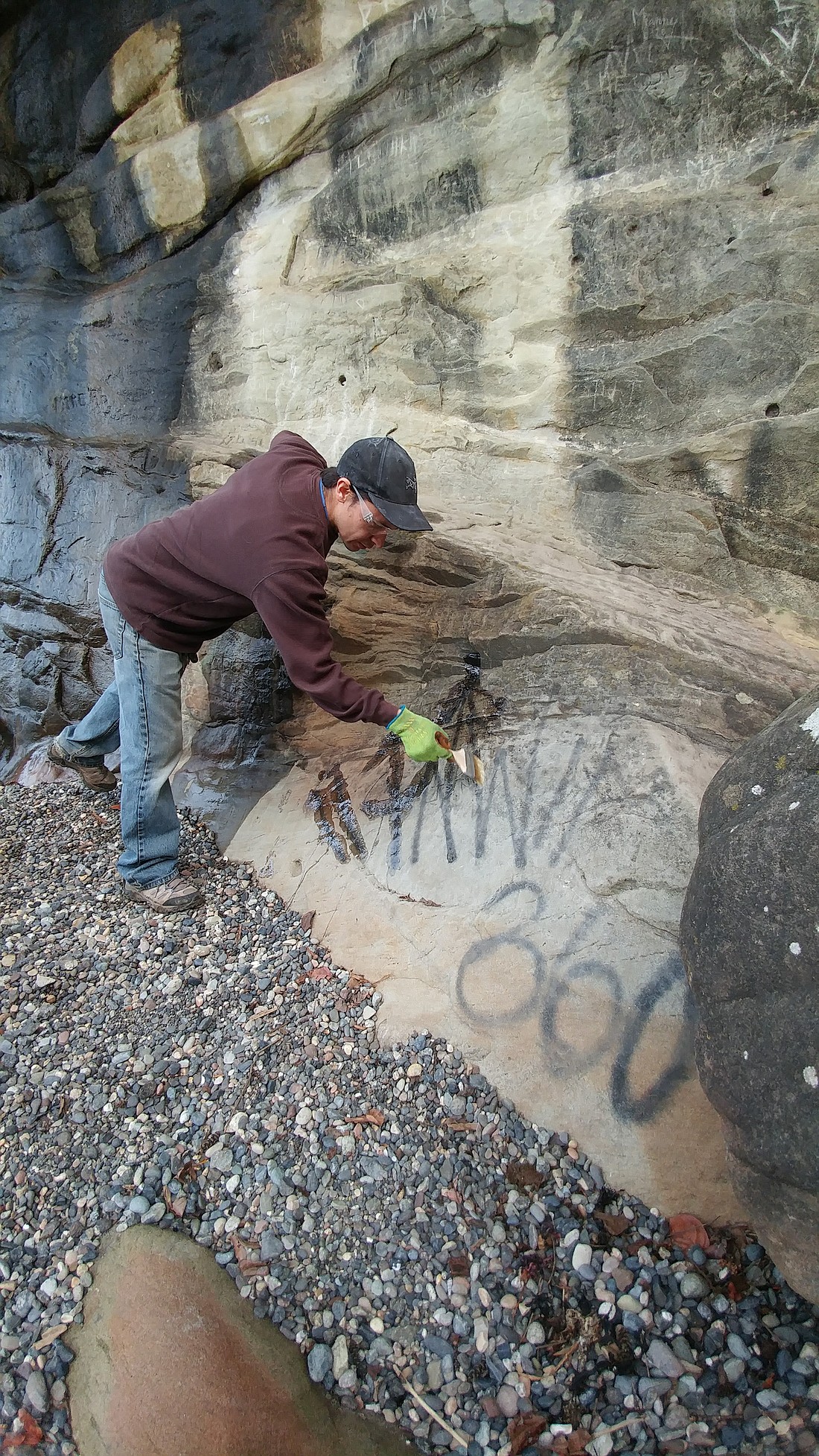 A worker with the Access Fund cleans up graffiti at Larrabee State Park in 2017. (Photo by Jason D. Martin)

If you’ve spent any time around boulders or cliff bands in the outdoors — especially those close to a road — you’ll note that many of them have been marred by graffiti. Locally, the areas that have been most impacted by this are the beaches of Larrabee State Park and the Sehome Hill Arboretum.

Graffiti appears in two forms. The first way that it appears is in paint. And the second is in scratching or carving. Paint can be removed from many rock types with a wire brush, an acidic product called Elephant Snot and significant work by volunteer stewards. Scratches and carvings in the rock, on the other hand, are much more permanent.

When graffiti appears it often begets more graffiti. Indeed, the controversial Broken Windows theory posits that the existence of graffiti in a given area lays the groundwork for other problems. In urban settings, the theory goes, graffiti is certainly a precursor to more graffiti, but also may be a precursor to petty crime. On public lands, graffiti may give people license to litter, willfully ignore trail signs or disregard a given area’s rules or regulations. The idea essentially is, if there’s graffiti here, then no one is paying attention and I can do whatever I want.

Regardless of how you feel about the Broken Windows theory and its application on public lands, there’s no question we have a problem. Graffiti has not only marred the places we recreate, it has also been discovered next to or on historic Native American petroglyphs. The most disturbing of these discoveries took place in April 2021, when the racist term “White Power” was found scrawled over 2,000-year-old petroglyphs in Moab, Utah. 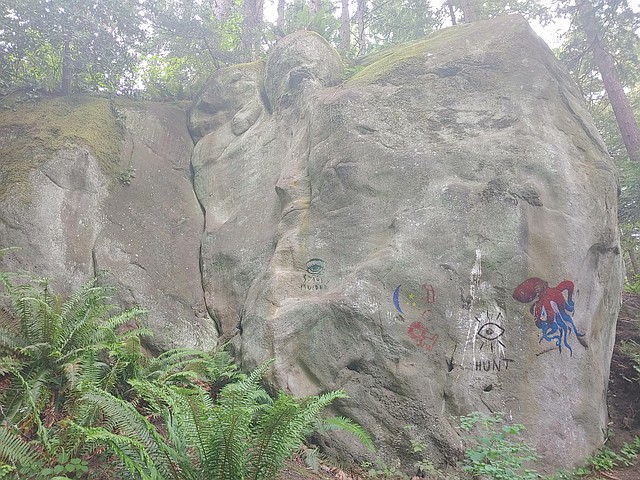 The “white power” graffiti falls into one of the three reasons people commit this kind of vandalism. The person who wrote this had a message — a reason for placing the graffiti — that they were trying to convey. This was a toxic and hateful message that went significantly beyond the words scratched into the rock due to the damage that it did to a cultural site. And as it was a cultural site, the vile words hurt all that much more. Unfortunately, this type of hate etched into the rock is the hardest to mitigate through public lands education.

But not all messages are mean, and perhaps if more people understood how their messages might be interpreted by others they wouldn’t place them. For example, at the top of the Boat Launch Wall in Larrabee State Park, someone scratched, “will you marry me?” into the rock. This is a profoundly personal message we should not have to see every time we go to the viewpoint above the wall. Indeed, I have to admit that every time I see that message etched there forever, a dark and spiteful little alleyway in my heart hopes that the person being proposed to saw that piece of environmental damage and said no. 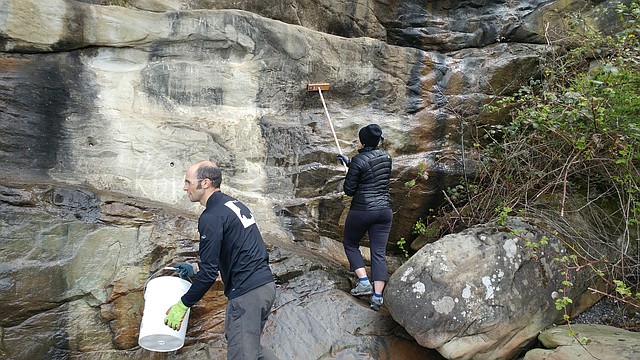 Joe Sombataro, with a bucket, works to remove grafitti in Larrabee State Park in a 2017 Access Fund project. (Photo by Jason D. Martin)

The second reason for graffiti is to say, “I was here.” We seem to have a cultural need to put our names on everything. This is likely some kind of toxic remnant of our colonial past. And though there are many problems with social media, the ability to say “look at me” every day online might allow some level of respite from graffiti for our parks and forests. Outdoor stewards have long promoted the idea that we should “take only pictures and leave only footprints.” Perhaps there’s a way that public lands officials and outdoor educators could package this idea in a more palatable way for those most likely to vandalize the rocks.

And finally, there are those who choose to vandalize public lands as an artistic statement. They paint complicated pictures on rocks or chip them away in some kind of pattern. In some cases, they post these pictures online and take credit for them. In 2016, Casey Nocket — a San Diego-based artist — learned the hard way that defacing public lands can come at a cost. She was ultimately sentenced to two years of probation and 200 hours of community service for painting pictures on rocks in seven national parks and posting them online. 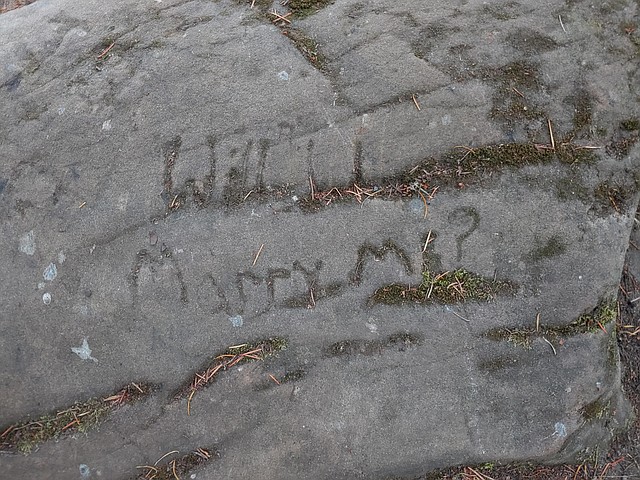 Carved graffiti in the sandstone at Boat Launch Wall can't be removed. 'Tagging' of natural features is a widespread problem. (Photo by Jason D. Martin)

Some might argue that the natives who placed ancient petroglyphs weren’t doing anything different than the modern visitor. Some might argue that they were just trying to say, “I was here.” They were trying to send a message or create art. And perhaps those who make that argument are right. But in 2022, we don’t need to spray paint rocks to make a statement. We don’t need to alter a place we don’t own to say something about the world.

The value of natural spaces is that they’re natural. Instead of trying to change these spaces to make them conform to us and our desire to be somehow recognized in a natural environment, maybe it’s time to allow these spaces to alter us.