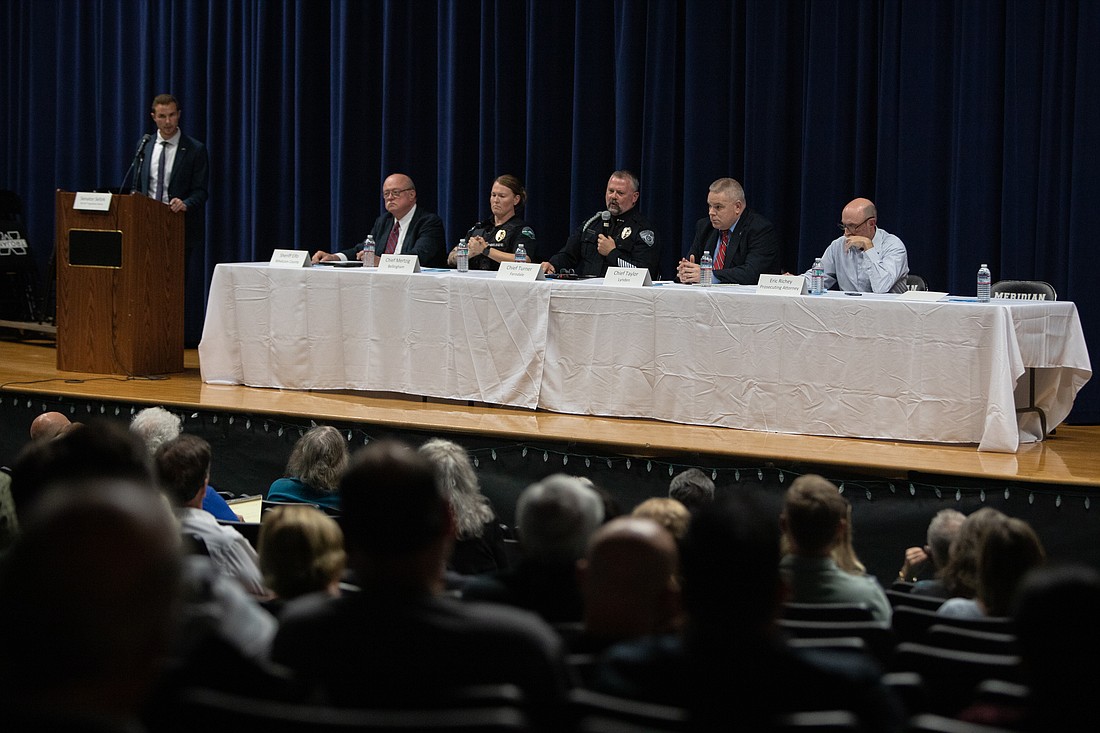 Calls to “defund the police” after the 2020 murder of George Floyd by Minneapolis cops have faded, as Bellingham and Whatcom County confront a property-crime wave and flagrant drug use on city streets.

Candidates for the state Legislature from Whatcom County blame the crime surge on multiple factors: shutdown of the courts during COVID-19, an inadequate jail that isn’t accepting many nonviolent offenders and a raft of police-reform legislation Democrats passed in 2021.

“This ludicrous legislation has led to an environment of chaos, lawlessness and disorder in our society,” Elfo told an audience at Meridian High School on Sept. 29.

He said criminals are emboldened by a 2021 change to the state’s vehicle pursuit law, which allows police to only pursue drivers suspected of DUI or certain violent offenses.

“There’s no holding criminals accountable, and we put that right at the feet of the Washington state Legislature,” Elfo said.

While both parties say the laws need to be fixed, Republicans as the underdogs in Olympia hope to make gains by emphasizing law and order as they court voters before the Nov. 8 election.

Public safety is the cornerstone of Republican Tawsha Thompson's campaign. Thompson, a 25-year veteran of the Bellingham Police Department, is challenging incumbent Rep. Alicia Rule in the 42nd Legislative District.

When asked why she was running for office, Thompson cited the 2021 legislation and her disappointment over “the dehumanization of law enforcement” after the deaths of Floyd and other Black people nationally at the hands of police.

Thompson, who has lobbied the Legislature as a representative of the Washington Council of Police and Sheriffs, said law enforcement wasn't given the opportunity to weigh in on the 2021 police reforms.

“I’m going to guarantee myself a seat at the table,” Thompson said. “We have to be heard.”

Thompson’s opponent, Rule, is the strongest supporter of law enforcement among Democratic candidates for state office in Whatcom County.

“We need to increase the number of law enforcement officers in our community,” she said Sept. 20 at a public safety forum in Bellingham. “That’s clear.”

Rule voted against the bill that limited police pursuits and attempted to fix 2021 legislation that made drug possession a simple misdemeanor and required cops to hand out two referrals for drug treatment before issuing a citation. One of Rule's bills would have created a tracking system for those treatment referrals, since police have no consistent way to know how many referral cards a suspect has already received. Another of her bills would have elevated possession of the deadly opioid fentanyl to a felony. Both bills failed.

In his state Senate campaign, Sefzik said fentanyl possession should be a felony. He would also fix the police-pursuit law, and he is already trying to get state funding for the mental health component of a new jail for Whatcom County.

He also likes an idea he heard from Bellingham police officers: giving drug offenders a choice between jail or mandatory detox.

“Those sorts of things can end up saving lives. They’ve been used successfully,” Sefzik said in an interview.

Rep. Sharon Shewmake, the Democrat who is running for Sefzik’s Senate seat, supports a regional training academy to boost officer recruitment and another Superior Court judge for Whatcom County, to help with the backlog of cases.

Much of Shewmake’s crime response focuses on prevention and jail diversion. She proposes more detox and mental health beds, along with more training and better pay for behavioral health professionals.

“One of the first bills, if not the first bill, that they should do is to pass something that makes it workable for our law enforcement community,” Timmons said of the pursuit law.

Johnson supports stronger drug laws and a new jail, adding that behavioral health programs need to be expanded, too.

“(The funding of) mental health services is something that we do need to look at,” Johnson said.