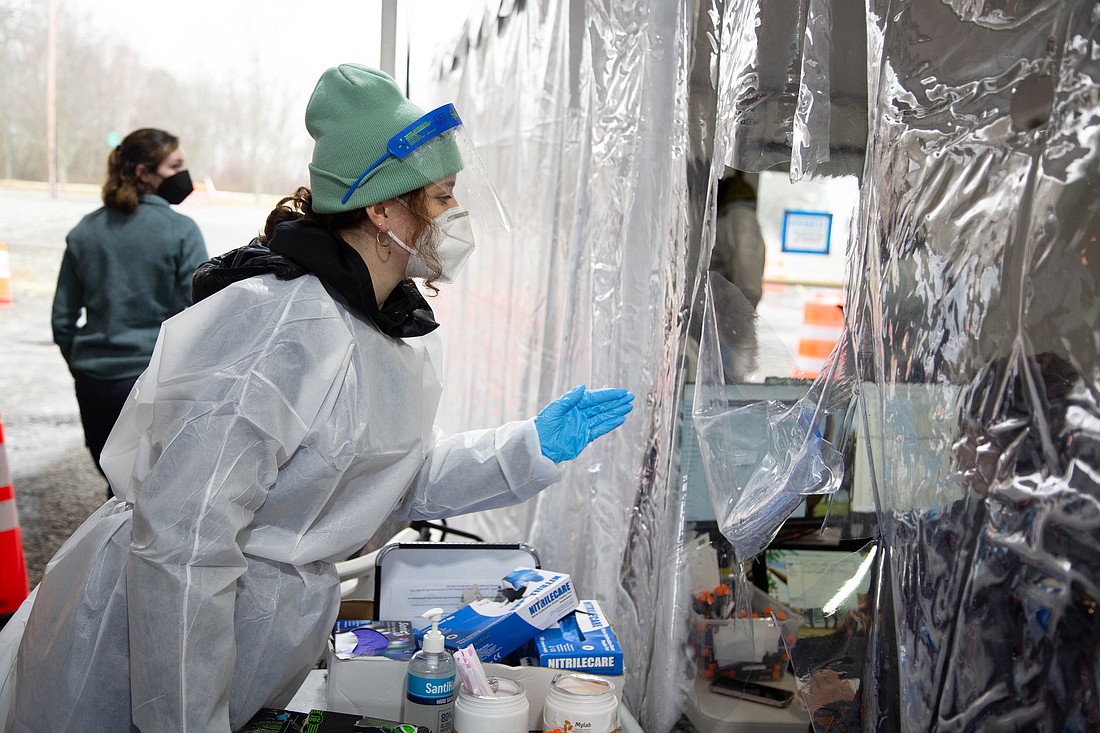 A station for COVID-19 testing operates in Bellingham in January. With elections coming up, local candidates are split on support of single-payer health care for Washington state. (Hailey Hoffman/Cascadia Daily News)
By OLIVIA HOBSON
Staff Reporter 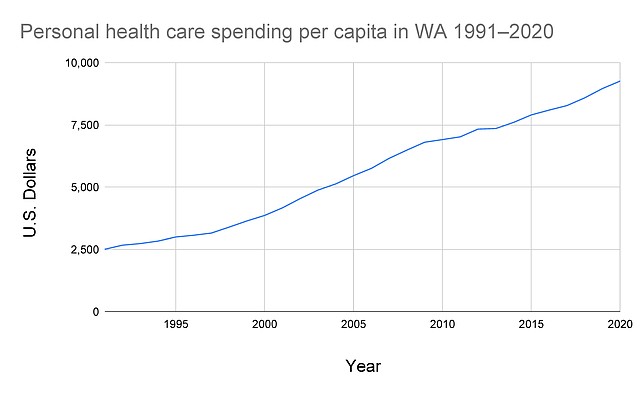 For Republican candidates like state Senate incumbent Simon Sefzik, the question of single-payer care comes down to cost: How much would taxes have to increase to pay for it?

Legislative District 42 House candidate Tawsha Dykstra Thompson admitted health care is an area she knows little about, but she recognizes the challenge in funding a new system.

“We are one of the most regressive tax states,” Thompson said. “So, if this is what the people want, but they don’t want higher taxes, what are we going to give up and how are we going to accomplish that?”

According to a report from the Committee for a Responsible Federal Budget, a single-payer system could not be funded by a high-income tax alone. The plan would cost the federal government an estimated $28–32 trillion dollars; aggressive tax increases on high-earning individuals and corporations would only raise $11 trillion, or about 40%, of those required funds. Taxes on the middle class would need to go up, according to the 2019 report. 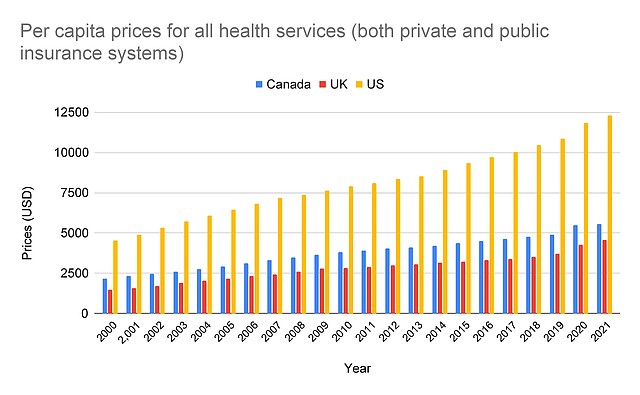 The growth of per capita health service prices for the U.S., Canada and the U.K. has risen across the board, but the U.S. has experienced higher costs compared to the other two countries. Canada and the U.K. both have public universal health care systems funded through taxes, while the U.S. has a share of both public (Medicaid and Medicare) and private systems. Source: Organization for Economic Co-operation and Development (Olivia Hobson/Cascadia Daily News)

While taxes would increase, research suggests that most U.S. citizens would see overall savings because of minimized or removed medical costs and insurance premiums, according to the Congressional Budget Office.

The National Health Expenditure grew to $12,530 per person in 2020, or 19.7% of the U.S. GDP. The average Washington resident paid more than $400 per month for commercial health insurance in 2019. Despite spending more on health care than any other wealthy country, health outcomes in the U.S. are no better than, and sometimes rank worse, than other developed countries, according to the Peter G. Peterson Foundation, a nonprofit tracking the United States’ fiscal challenges.

Health expenditures in Washington state for private health insurance have become increasingly more expensive; those costs have increased by 5.6% per year since 1991, according to the Centers for Medicare and Medicaid Services. 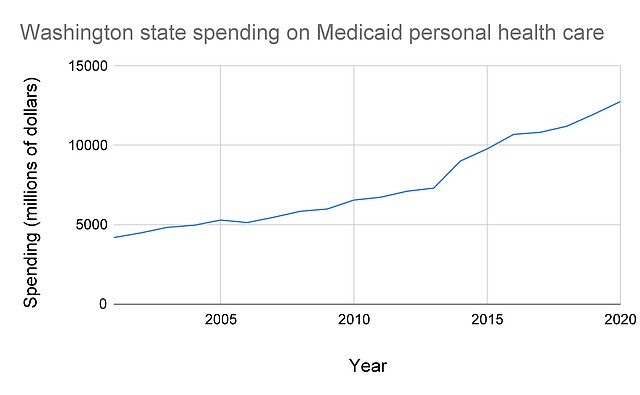 Comparatively, state spending on personal health care services through Medicaid has also risen since 2001, but the cost is generally lower than what is spent on private insurance. The state paid $114 million for Medicaid in 2001 and $552 million in 2020. Source: Center for Medicaid and Medicare Services (Olivia Hobson/Cascadia Daily News)

State Senate candidate Shewmake compared her experience giving birth in both the U.K. and the U.S. to contrast how the two systems operate. In the U.K., her appointments with midwives leading up to the birth of her first child were less frequent but more focused, while her care in the U.S. felt unnecessarily frequent, less effective and more expensive.

“In America, we do what you can bill for,” Shewmake said at a candidate forum in August. “Often that’s expensive and it increases the costs of what we pay, especially with our [insurance systems]. In the U.K., they do what is actually effective and good for your health.”

Achieving a universal health care system is a long-term goal, Larsen said, but things can be done in the meantime to make health coverage more affordable.

Recent legislation in Washington state capped the price of insulin at $35 a month, dropping the cap from $100 a month, beginning January 2023. Another bill passed in the 2021 Legislature, the Cascade Care Act, will increase affordable, standardized health coverage options to Washington residents.

“We’re continuing to take steps to get towards universal health care,” Larsen said. 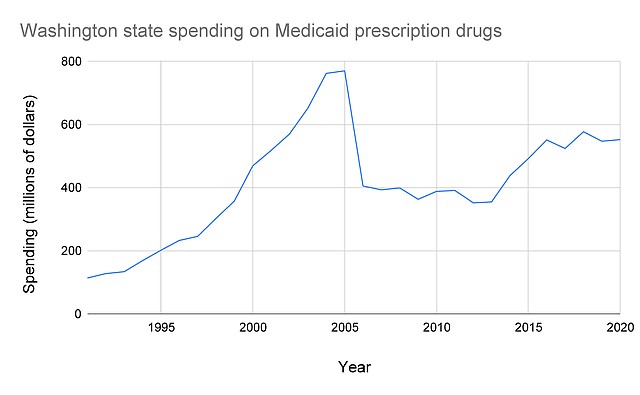 State spending on Medicaid prescription drugs experienced a steep decline after a steady climb, in part due to the Medicare Prescription Drug, Improvement and Modernization Act that went into effect in 2006. The act gave seniors and youth with disabilities already covered with Medicare a prescription drug benefit that transferred their prescription costs from Medicaid to Medicare. Source: Center for Medicaid and Medicare Services (Olivia Hobson/Cascadia Daily News)

Larsen, who voted to expand Medicaid tax credits to increase Affordable Care Act eligibility and cap out-of-pocket and prescription costs for Medicare members, highlighted the change in uninsured rates in Washington state going from almost 16% in 2010 to slightly more than 6% in 2019.

While Ramel and Shewmake support single-payer health care, both recognize it will not be something realistically implemented without coordinated federal support, and Ramel acknowledges the state is still years out from implementing a system like it.

But in the meantime, Ramel wants to see action.

“Let’s agree on a long-term end goal, but what really matters is what we’re doing in the next six months, the next two years, to move the ball forward and get more people health care,” Ramel said.

This story was clarified to reflect that Sharon Shewmake supports single-payer health care, but believes it will be best implemented at a federal level. While in the U.K., Shewmake could access health care appointments at any time, but she did not need to attend as many doctors' visits leading up to giving birth as in the U.S. The story was updated to reflect this change at 2:01 p.m. on Oct. 11, 2022.