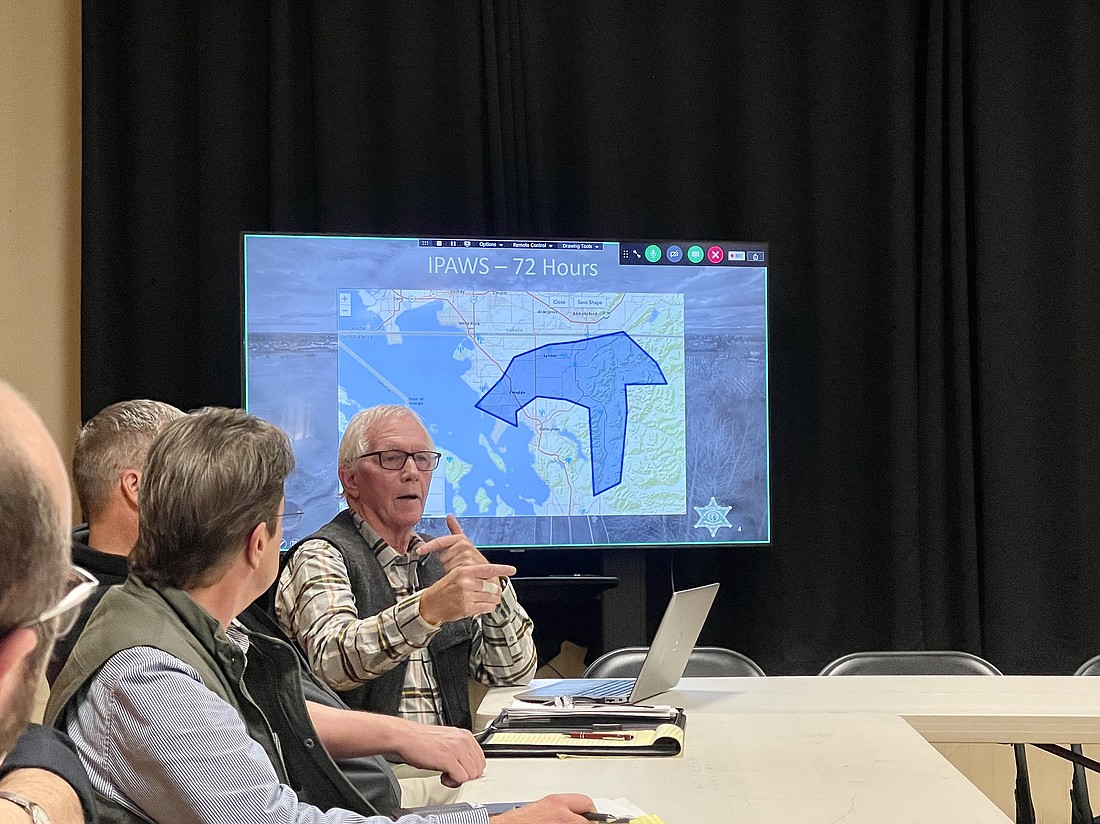 EVERSON — Almost one year after catastrophic floods destroyed homes and communities across Whatcom County, officials and emergency responders are trying to get ahead of future flood concerns, preparing worst-case-scenario evacuation and notification plans.

A group of officials convened in Everson Thursday to continue emergency preparedness discussions, with emphasis on emergency notification and evacuation times.

“We got hammered [in November 2021],” John Gargett told the committee. “Now is the time to err on the side of caution.”

Gargett, the deputy director of Whatcom County Sheriff’s Office Division of Emergency Management, led a presentation about notification systems and evacuation alerts in the event of future high floods.

There are several systems in place for the county, Gargett said, including the Integrated Public Alert & Warning System and AlertSense. Both systems can send texts and notifications, and AlertSense can deliver messages to more than 1,300 landlines across Sumas.

Concerns arose during the meeting, however, when many attendees questioned the accessibility, translation and timeliness of alerts, which Gargett recommended sending out about 72 hours before a major flood event.

Simon Sefzik, the current 42nd District state senator and one of several state legislative candidates in attendance, was concerned the early alerts may create a “boy who cried wolf” scenario in which people in danger zones ignore the early warnings. Other officials say the 72-hour warnings, which will be available in English, Spanish and Russian, will be a big help for emergency responders and search-and-rescue teams.

“In 72 hours, a lot of things can change,” said Paula Harris, the river and flood manager at the county’s public works department. “We need to remember, though, we’re never confident [about the river]. We might be confident we’re going to have overflow, we just don’t know how much.”

Harris shared details about other flood mitigation projects the county is working on, including a recent Nooksack River scalping project. The project, which entailed vegetation and sediment removal from about 150 feet of the river, was finished Thursday afternoon, Harris said.

Several county employees and officials were in attendance, including mayors from Whatcom’s small cities.

“I hope we’re doing all of this for nothing this year,” John Perry, the mayor of Everson, told the audience.

Lynden Mayor Scott Korthuis shared updates, too, about how other communities could help those at risk of flooding, and said several churches in Lynden were prepared to open their doors as temporary shelters in the event of catastrophic floods.

One of the key safety measures county employees and emergency responders discussed was road gates to mitigate potential loss of life. In the event of road closures, there will be five locations where gates are placed across roads to prevent people from driving through dangerous areas.

“When we close a road, it’s for a reason and for one reason only, and that’s for the safety of people there,” said Roland Middleton, the county’s public works special programs manager.

When asked if the county should expect to see destructive flooding this year, Harris said, “I don’t make predictions … but I’m keeping my fingers crossed [we don’t].”