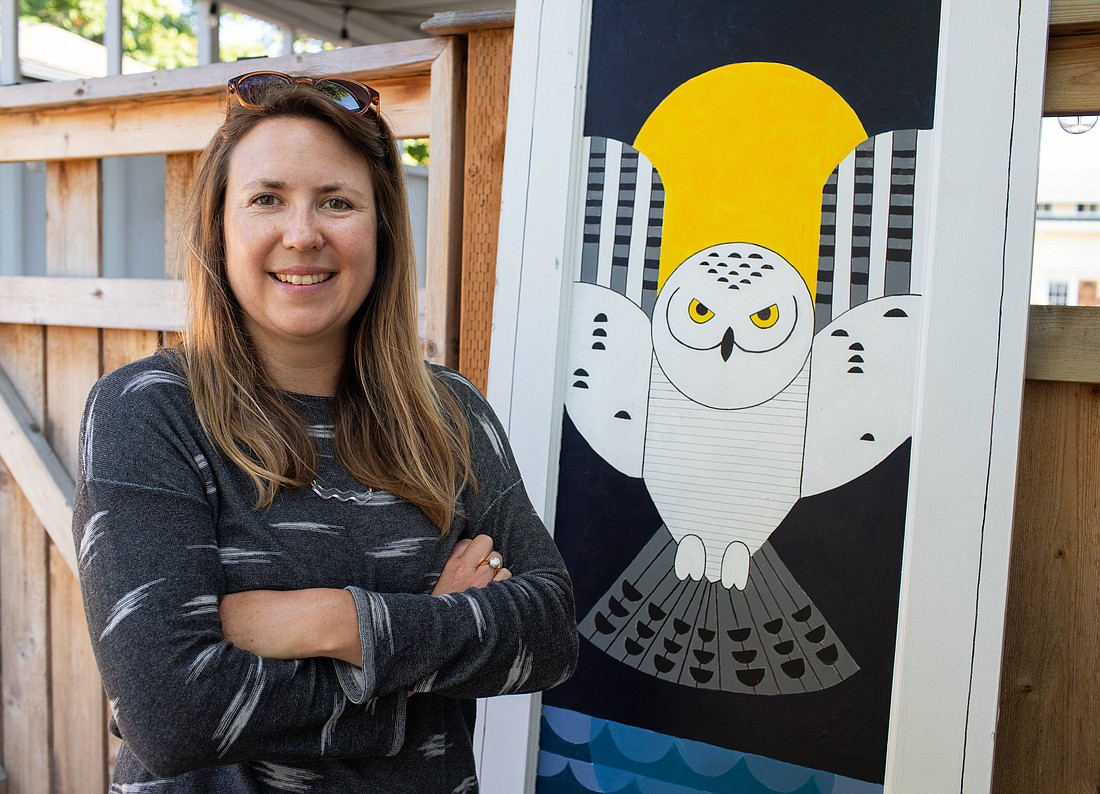 Artist Kirsten Anderson stands with her stolen door, which was returned by Alec Howard after a treasure hunt across Whatcom County. The tarot card-inspired painting features a snowy owl and a full moon on one side, and a sun and turkey vulture on the other. (Hailey Hoffman/Cascadia Daily News)
By AMY KEPFERLE
Staff Reporter

When Alec Howard spotted an RV matching the description of one that had been seen being driven by a man who removed a painting at 2:11 a.m. Friday, Sept. 2, from the brick wall of Gallery Alley between Mindport Exhibits and the Wild Buffalo, he sprung into action.

For Howard, a landscape and clean-team assistant at Downtown Bellingham Partnership (DBP) who'd seen video footage of the heist and recognized the ride, this meant first calling his boss, Kenny Austin (who didn't answer). Howard then reached out to the Bellingham Police Department, who reported they'd pulled the driver over the night before, searched the trailer and come up empty in regards to the purloined painting — which was part of an alleyway exhibit consisting of works by local artists created on doors donated by the RE Store.

Because the installation was a creative collaboration between the DBP and the RE Store, Howard had a stake in how the story ended. However, he never imagined the pathway to the recovery of Kirsten Anderson's owl-focused artwork would drag on for weeks and ultimately involve a treasure hunt of sorts.

“I knew the door wasn't going to be in the trailer, but I wanted to talk to the guy,” Howard, 32, said. “I basically wanted to offer him a hundred bucks, no questions asked. I didn't care what had happened, I just wanted the door back.” 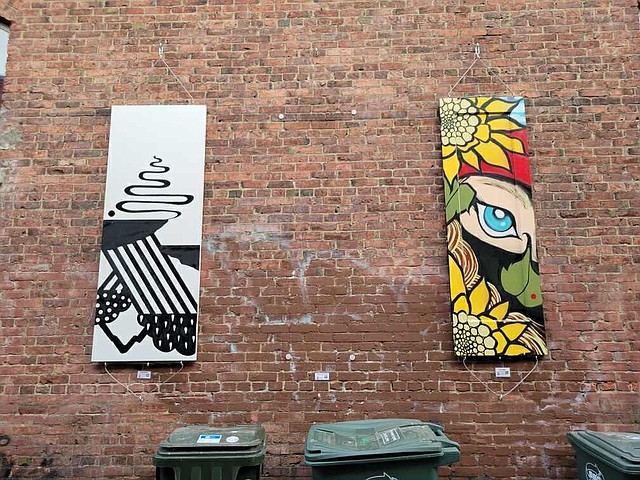 Kirsten Anderson discovered that her work of art in Gallery Alley had been stolen when a friend went to see it during the September Art Walk and reported back to her that it wasn't there. The space between these two paintings was glaringly empty. (Photo courtesy of Downtown Bellingham Partnership)

After waiting for nearly an hour on the sidewalk in front of the Little Cheerful Cafe, Howard heard the RV rev up and ran over to plead his case. When the man calling himself “Smokey” opened his car door — letting out two large German shepherds — Howard said he reminded him of Joe Exotic from the documentary Netflix series “Tiger King.”

Howard said Smokey was genial, had no issues talking to him but insisted he didn't know anything about the door. Howard avoided being confrontational, and Smokey assured him he'd “call some friends and figure out what happened to this door for you.”

They exchanged numbers, and Smokey called Howard later that day to let him know he hadn't forgotten about him. This back-and-forth of texting and phone calls went on for the next two weeks, with Howard assuring Smokey he could leave the painting in the alley (or wherever) and he'd pick it up, no questions asked, and Smokey maintaining he was on the case. Finally, Howard sent Smokey a screenshot of him with the door and his trailer.

“I was like, 'Smokey, I have you on camera. I'm not the police, I've been nothing but nice to you, I just want the door back,'” Howard said, adding the artist wouldn't press charges if he returned it. “He was like 'Gotcha, peace man. I think I found your door. This guy Jim bo's got it. I'll have him call you.'”

“Hey, Jim bo just hit me,” the text read, “he said look behind door number one, be the change. Good luck my friend. Stay true. That is all I can do. Peace.” 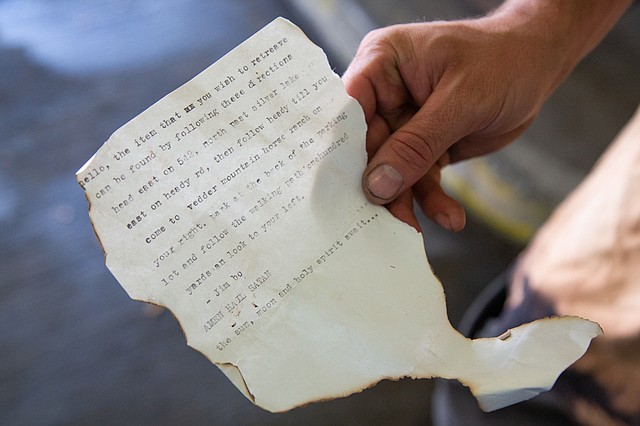 Howard was having coffee with a friend at the time, and the two rushed to the alley to see if Anderson's painting had been returned. It wasn't there, but Howard's friend sussed out that the “be the change” clue related to one of the doors that had a similar quote by Gandhi painted on it. They looked behind it and found a wadded-up rag with a folded-up piece of cardboard in it.

In the cardboard was a cryptic note that had been typewritten and singed on the edges. It gave directions for “the item that you wish to retreave (sic),” which pointed to a walking path near Vedder Mountain Horse Ranch near Kendall. Jim bo signed it “AMEN HAIL SATAN” and finished with “the sun, moon and holy spirit await.”

That message came in on a Tuesday, and on the morning of Friday, Sept. 23 Howard and Austin made their way to the north county. Although the directions were sketchy, they found the trail system but once again came up empty.

Still on the hunt, Howard reached out to the Whatcom County Backcountry Horseman's Association. On the way out of the parking lot, he'd seen a sign saying they managed the trail.

After a few phone calls, it came to light they'd had complaints about a door on the trail, and it had been retrieved by a member named Roger, who currently had it in the back of his pickup truck. Howard and Austin picked it up, found out it was in decent shape and brought the case of the missing door to a close. 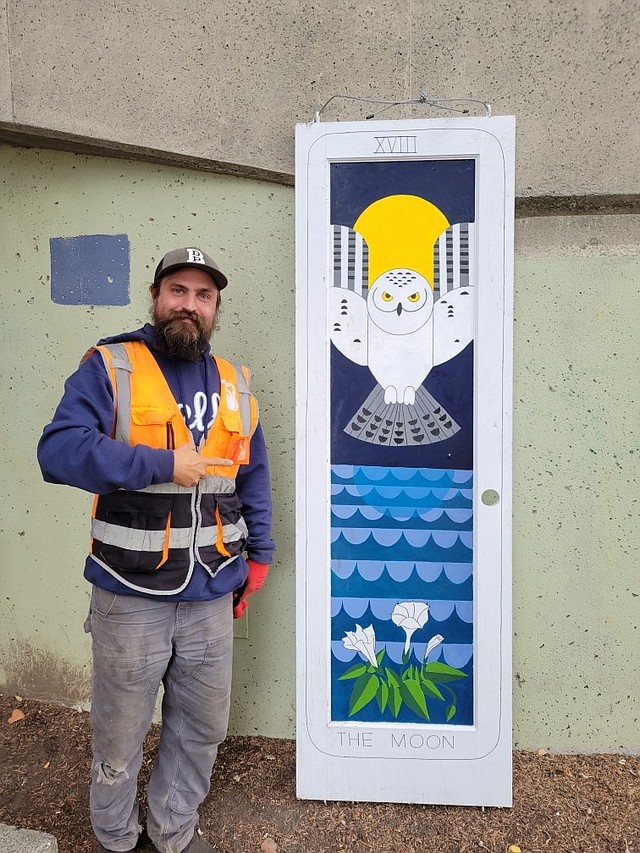 Anderson was thrilled to hear her painting had been retrieved and is currently touching it up before it takes up temporary residence in the window front at the Bank of America on Holly Street later this month — along with the rest of the Gallery Alley paintings. In the spring, a new set of door paintings will take up residence in the outdoor space.

“It's testimony to Alec's relationship-building and treating all humans with respect” that the art was retrieved, Anderson said. “I don't think it was a malicious crime.”

Anderson theorized that perhaps the subject matter of the tarot card-inspired painting — with a full moon, snowy owl and datura plant on one side of the door, and a sun, turkey vulture, desert scene and prickly pear plant on the other — called out to Smokey. That said, she'll be glad to have it back in the public realm.

“I don't like that it was hoarded for one person,” she said, noting an art project meant to beautify an underutilized space should be able to be seen by everyone.

Howard agrees. And while he finds many of the aspects of the tale to be humorous, he takes his job seriously and is glad he didn't give up on getting the artwork back where it belongs.

“I think the moral of the story is that persistence pays off,” he said, “and that if you give people the benefit of the doubt, you might be surprised.”

To find out more about Kirsten Anderson's artwork, go to rambleoutyonder.com.