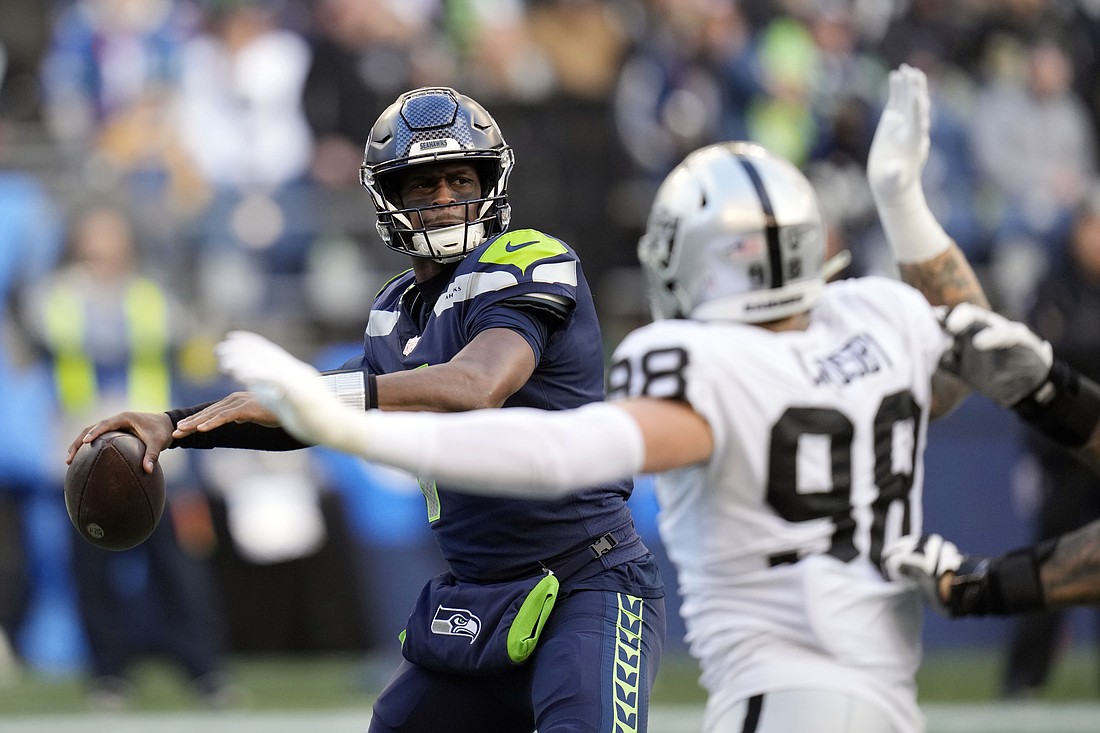 Seattle Seahawks quarterback Geno Smith throws against the Las Vegas Raiders during the second half of an NFL football game on Nov. 27 in Seattle. (Gregory Bull/AP Photo)
By Tim Booth, AP Sports Writer

RENTON, King County — It was a feel-good story for a while surrounding the Seattle Seahawks.

But then came expectations as that story got better and a team most believed would struggle to win five games suddenly surged to the top of the NFC West.

Now, the next stage has arrived: concern and worry after two straight losses that have left Seattle on the outside of the playoff picture along with issues from earlier in the season that seemed solved resurfacing in a troubling way.

The second straight loss came on Sunday when the Seahawks were run over by the Las Vegas Raiders in a 40-34 overtime loss that was capped by Josh Jacobs’ 86-yard game-winning TD dash.

The Seahawks allowed 283 yards rushing — a franchise record — and 576 total yards to a talented Las Vegas team that had underachieved through the first half of the season.

“We didn’t come out of the bye as sharp as we would like to,” Seattle coach Pete Carroll said Monday. “I have no idea if that had to do with the bye or not, but we just didn’t play well enough upfront and that’s where our focus will be here.”

This Seahawks team was always going to play with a thin margin where one major deficiency in a game was going to be difficult to overcome.

That was the case on Sunday. Seattle’s run defense was obviously putrid watching Jacobs run wild.

And even though Geno Smith threw for more than 300 yards, the Seahawks failed to have any successful run game of their own and committed a pair of turnovers, including a fumble at the Las Vegas 23-yard line early in the fourth quarter.

While the balance of the offense was not what Seattle wanted, Smith continues to show he can handle the load if the Seahawks need to lean on the pass game. Smith threw for 328 yards, his third game this season with at least 300 yards passing. Smith also was able to escape pressure and make a few key plays with his feet. But the problems with the run game left Seattle in a lot of third-and-long situations and led to the Seahawks going 3 for 9 on third downs.

While the run defense in the obvious answer, Seattle’s offensive line also struggled in the loss with both rookie tackles having moments where they looked like first-year players. The Seahawks never fully established their run game and rushed for only 65 yards with 22 of those coming from Smith. Kenneth Walker III rushed for touchdowns of 12 and 14 yards, and his other 12 carries netted zero yards. Smith also was sacked three times and the Raiders had 10 quarterback hits led by six from Maxx Crosby.

Rookie CB Tariq Woolen is already getting the special treatment of teams purposely avoiding having to throw in his direction. That was reinforced on Sunday. When the Raiders decided to throw in the direction of Davante Adams, it was almost exclusively when he was matched up on the side of cornerback Michael Jackson and not Woolen. All seven of Adams’ catches were to Jackson’s side of the field.

There is a lot of respect being paid toward Seattle’s rookie.

Darrell Taylor continues to have a exceedingly underwhelming season. Taylor was on the field for just 18 snaps — plus one extra when he inexplicably came off the sideline during Quandre Diggs’ interception return on the first play of the game.

“I saw the film. I was shocked,” Carroll said. “He thought (Diggs) was gonna stay down. He thought the play was over. He owned that. He said, ‘I screwed that up.’”

But the rest of those 18 snaps, Taylor failed to record any defensive statistic. No tackles, no pressures, no QB hits. Coming off 6½ sacks last season, Taylor was thought to be a budding pass rush star that would thrive in Seattle’s altered defensive scheme. Instead, he appears to have regressed and lost playing time to 35-year-old veteran Bruce Irvin.

2-14 — Since the start of the 2019 season, the Seahawks are 2-14 when giving up at least 150 yards rushing. Seattle has lost nine straight when that mark has been reached by its opponents.

Safety Ryan Neal suffered a badly bruised elbow in overtime and was not on the field on Jacobs’ decisive run play. Neal’s replacement, Josh Jones, took a poor angle on the play and that allowed Jacobs to break free. ... DL Darryl Johnson underwent foot surgery and will be out for the rest of the season. Johnson was hurt in Week 4 against Detroit.

The Seahawks will jump back into division play against the Los Angeles Rams on Sunday. Seattle has lost each of its past four trips to Los Angeles, but won at SoFi Stadium earlier this season in beating the Chargers.