Skagit Co. man a victim of Idaho stabbing that killed 4

No suspect identified as of Thursday in student killings 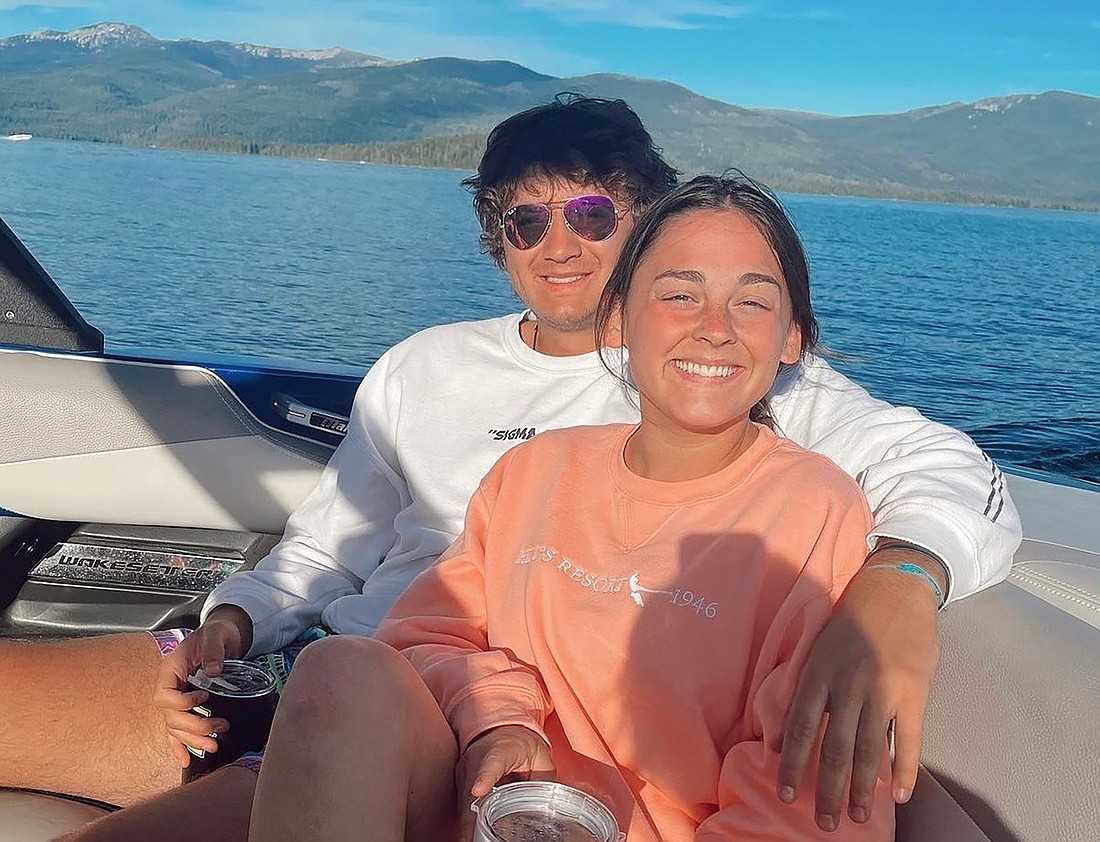 University of Idaho students Ethan Chapin, left, and Xana Kernodle on a boat on Priest Lake, in Idaho, in July 2022. Chapin is from Conway, Skagit County, and both students were among four found stabbed to death in an off-campus rental home on Nov. 13. (Photo courtesy of Jazzmin Kernodle via AP)
By Rebecca Boone and Nicholas K. Geranios, Associated Press

BOISE, Idaho — Police in the college town of Moscow said Wednesday they have not identified a suspect or found a weapon in the weekend slayings of four University of Idaho students in a rental house near campus. One of the victims was identified as Ethan Chapin, 20, from Conway, Skagit County.

Authorities continue to believe the attack was targeted but walked back a previous statement that there was no threat to the public.

“Investigators are working to follow up on all the leads and identify a person of interest,” Moscow Police Chief James Fry said at a news conference. “We do not have a suspect at this time, and that individual is still out there. We cannot say that there is no threat to the community."

“We need to be aware of our surroundings,” Fry said.

All four victims were stabbed with a knife, the chief reported. There was no sign of forced entry, and a door was found open by the first police officers to arrive. Two other people were found alive and unhurt in the large home.

“I’m not going to go into what they shared,” Fry said.

“We’re focusing on everyone," he added. "We’re still following up with everyone that could have been in that area.”

Some of the victims’ family members have been urging tight-lipped police to release more information about the killings and to reveal why they said there was no ongoing danger.

Fry defended those statements, saying, “We take the totality of the things we see ... and make the best decision we can. I'm not going to expand on that.”

The victims — three women and one man, all close friends — were found dead Sunday afternoon by police responding to a report of an unconscious person at the home. Officials said they were likely killed several hours earlier.

Fry would not say who it was that called 911.

The other three victims were identified as Madison Mogan, 21, from Coeur d’Alene, Idaho; Kaylee Goncalves, 21, from Rathdrum, Idaho; and Xana Kernodle, 20, from Avondale, Arizona.

Autopsies were performed Wednesday in nearby Spokane, Washington, and Idaho State Police and the FBI were also working the case, Fry said

The family of Goncalves issued a warning to whoever was behind the killings.

“To whomever is responsible, we will find you. We will never stop. The pain you caused has fueled our hatred and sealed your fate,” the family said in a tweeted statement. “Justice will be served.”

Moscow is a town of about 25,000 in the Idaho Panhandle, some 80 miles south of Spokane.

News of the slayings prompted many of the 11,000 students to leave the Idaho campus early for Thanksgiving break.

University of Idaho president Scott Green also spoke at the news conference and said the school will remain open the rest of the week because some students found comfort in being on campus with faculty and classmates. But the school was also giving excused absences to anyone who feels more comfortable leaving early.

“We will support each other as we grieve,” Green said, his voice breaking as he read out the four names. “We just want justice for these victims.”

“Your grades are severely less important than your lives. I wish all the students of U of I safety and peace,” she wrote a few hours before the police news conference. “You guys are not safe until this sicko is found. If the person who did this is capable of killing four innocent people, they are capable of killing more.”