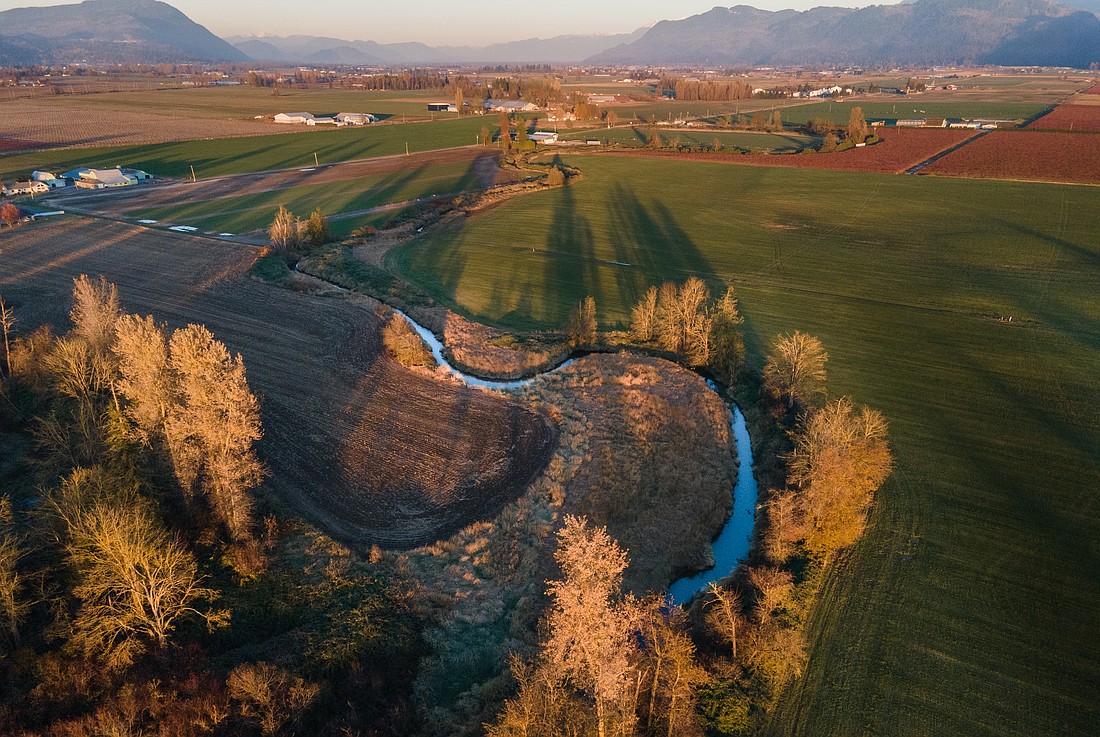 The Sumas River winds through north Whatcom County and crosses the Canadian border, eventually draining into the Fraser River. Historically, though, it flowed into the former Sumas Lake, which was drained in 1924. (Hailey Hoffman/Cascadia Daily News)
By OLIVIA HOBSON
Staff Reporter

Editor's note: Flood: One year later is a multipart series exploring how the devastating November 2021 flooding changed the lives of Whatcom County and Skagit County residents, as well as bodies of government, over the past year. From farmers to mayors, the historic flooding led to economic challenges, developing plans for the future and preparative measures. Today’s story explores the historical connection between the Nooksack and Fraser rivers, and Sumas Lake.

The North Fork Nooksack River is center stage in flood debates being waged in communities across northern Whatcom County. Part of the challenge in managing the river’s flood risk today is its hydrologic past, a topographic history that connects the Nooksack River, the Fraser River and all the valleys and prairies in between.

Today, the North Fork flows through Whatcom County firmly on the U.S. side of the Canadian border, depositing more than 2,000 tons of sediment per square mile annually on its path to the river delta north of Bellingham. But the river has not always drained exclusively into Bellingham Bay, said Paul Pittman, a geologist with Saturna Watershed Sciences who has studied the river since 1990. Historically, the North Fork did what all rivers do — followed the path of least resistance.

At one time, the river flowed north from Everson, across the international border and into the Fraser River, Pittman said. He and his colleague wrote an abstract about the Nooksack’s path north through the Sumas valley flood plain in 2003.

“We were fascinated by all these things we saw on the ground that indicated that the Nooksack River went to Canada,” Pittman said. “The one thing that everyone asks is, ‘When did it switch?’ The answer is that it was really recently. Not thousands of years ago, but hundreds of years ago.”

Evidence for this theory has been available since the late 1970s. Baker andesite, a rock exclusively found on Mount Baker or in sediments deposited downstream, has been found in the Sumas Prairie between Everson and the Fraser River, Pittman said.

That geologic signature, as well as satellite data that maps the contours and crevices of the hills, valleys and riverbeds throughout northern Whatcom County and southern British Columbia, provide a peek back in time to reimagine the North Fork’s old route, Pittman said.

The topography in northern Whatcom County was sculpted over hundreds of millions of years by geologic and glacial forces, carving out the river’s possible channels. The river winds its way down Mount Baker into the glacially scourged valleys of northwest Whatcom County, where the North Fork has a selection of different directions it could go, so long as the route goes downhill.

Before human activity restricted its migrations, the river would avulse, or shift back and forth between different valleys. Large rivers leave telltale evidence in the form of oxbows, or the crescent-shaped bends in a river path, in squiggles across the valley floors, Pittman said. In the valley north of Everson, the land is covered in them. These features couldn’t have been made by the small streams and creeks that trickle there now.

One of those small rivers, the Sumas River, meanders its way through north Whatcom County and crosses the Canadian border where it flows north, eventually draining into the Fraser. But at one time, the river drained into the former Sumas Lake instead.

As recently as 1920, Sumas Lake filled the present-day agricultural fields north of Abbotsford. At its largest, Sumas Lake was the size of Bellingham Bay but fluctuated greatly in size depending on the season. Present for the 10,000-year history of human settlement in the Sumas area, the lake has only been absent for the last 100 years. It was an ecologically and culturally significant part of the Semá:th (Sumas) First Nation’s traditional homeland.

The lake was drained in 1924 after settlers became exasperated with its unpredictable floods, making agriculture difficult. The Barrowtown Pump Station continues to keep the prairie dry under normal conditions, but the floods last November showed the prairie’s flooding affinity: being 40 feet downhill from the Everson Overflow, water tops the banks of the Nooksack River and flows north instead of west.

Gordon Logie, a geographer with SparkGeo who used geospatial technologies to map the 2021 flooding, connected the prairie’s history to its flood challenges today.

“This was historically a lake, and it was drained and is actually actively drained in order to prevent it from turning back into a lake,” Logie said. “It’s a very man-made area.”

Logie used elevation data to visualize why the Everson Overflow happens and where flooding is most likely in the Sumas Prairie. The results paint a complicated picture of international flood management needs that have challenged officials in the past.

How water floods along the Nooksack overflow channels

After the 1990 flood, which was similar to the 2021 floods, Canadian officials proposed a dike along the Nooksack River to stop flood waters from going north across the border, among other potential flood-mitigation strategies. That would send the excess floodwaters downstream to Lynden and Ferndale. Officials in Whatcom County argued the strategy would be politically unfeasible.

Finding an international solution to the floodwaters that inundate the areas north of the North Fork is incredibly complicated, but Logie said he hopes providing geospatial data and technologies will help decision-makers connect geographic issues.

“It's in everybody's best interest to deal with this problem and mitigate it as best as they can,” Logie said. “It's kind of messy, but I think that if both parties approach it in good faith and they used geospatial data as kind of a source of truth and understanding … I think that there could be something that worked for everyone.”

Now, officials in both Canada and the U.S., Whatcom County and British Columbia, have been charged with managing the North Fork to minimize the risk catastrophic 100-year flood events, those with a 1% chance of happening every year, pose to the communities in the flood path. While understanding the North Fork’s history is important to understand its flood patterns, it won’t make a management difference, Pittman said.

“We are in a spot, management-wise, where it's hard to separate objective decision-making [from] emotional," Pittman said. "Post-floods, it's a very emotional time, and we often don’t make our best decisions when we’re emotional because it’s personal.”