Seahawks brought back down after clunker in Germany 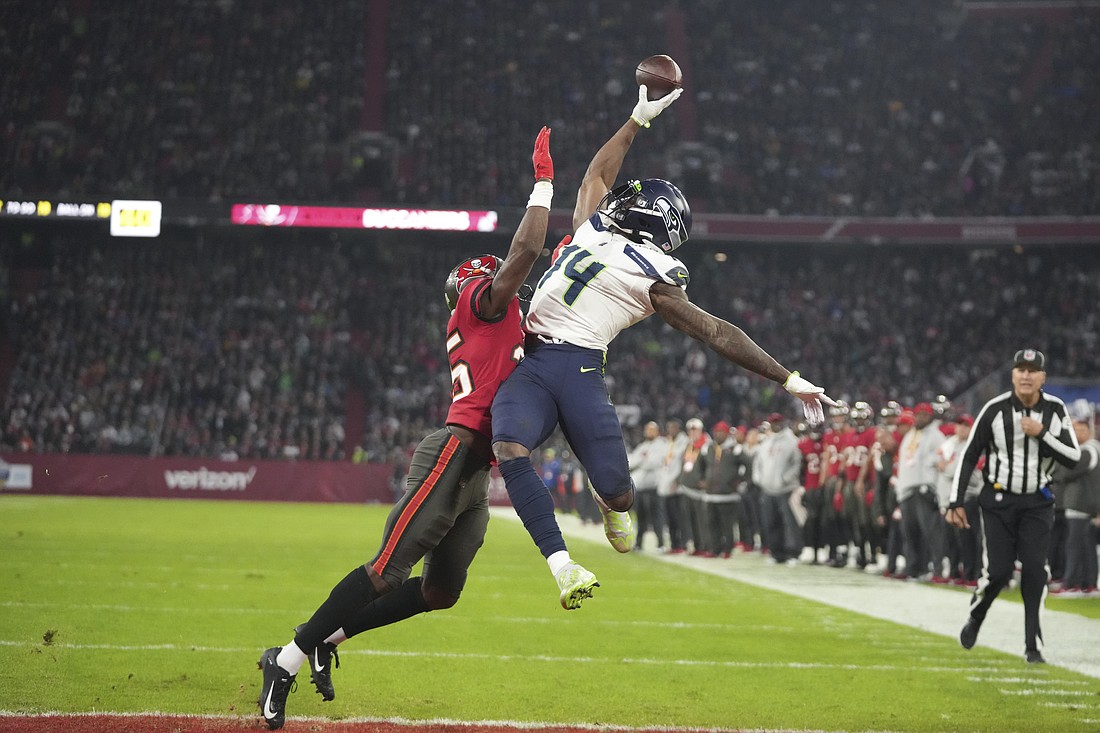 Seattle Seahawks' DK Metcalf (14) is defended by Tampa Bay Buccaneers' Jamel Dean (35) during the second half of an NFL football game in Munich, Germany, on Nov. 13. The pass was incomplete. (Matthias Schrader/AP Photo)
By Tim Booth, AP Sports Writer

SEATTLE — The Seattle Seahawks were enjoying a charmed existence as one of the best stories of the NFL through the first half of the season.

But they headed into their bye week following a clunker of a performance on an international stage in Sunday’s 21-16 loss to Tampa Bay, which resurfaced some issues with the Seahawks that had been quieted during their four-game winning streak.

“We allowed them to do things they hadn’t done,” Seattle coach Pete Carroll said. “They ran the ball really well, and they played really well on third down. Those aren’t things they’ve been really great at, and we were kind of hoping it wouldn’t be like that.”

The first NFL game played in Germany was a forgettable on-field experience for the Seahawks (6-4), who couldn’t get off the field on third down defensively against Tom Brady, lacked any offensive consistency in the first half and saw some mistakes from quarterback Geno Smith that he’s mostly avoided to date.

After more than a month of solid and sometimes exceptional play, Smith seemed to suffer a market correction. He was indecisive and at times jumpy in the pocket. He lacked some of the accuracy that defined his success through the first nine games. And he had a costly fumble deep in Tampa Bay territory in the third quarter when he could have easily just thrown the ball away.

Smith had a few flashy spots in the fourth quarter and his overall numbers were still solid. But he was 6 of 10 for 69 yards in a first half in which Seattle had a meager three first downs.

“I don’t think that first half really is who we are," Smith said. “We couldn’t get anything going.”

Seattle needs to hope the overall performance was just a blip and a brief re-emergence of problems from earlier in the season. But it is still leading the NFC West after 10 weeks, which no one expected in the preseason.

This team does have a certain level of resiliency that’s defined by Smith. The Seahawks trailed 21-3 before mounting a comeback that needed one more defensive stop to have a chance at potentially stealing a late victory. Smith was 8 of 11 for 108 yards and two touchdowns on Seattle’s final two possessions.

“We talked about how important it is to realize that we were right back in this game and that we weren’t out of it, and we never thought that, and we didn’t show that,” Carroll said. “That is the same kind of mentality that’s going to help us finish this season and do something special with this year.”

Seattle had zero running game, which contributed to the problems on offense in the first half. Kenneth Walker III finished with 17 yards rushing on 10 carries and didn’t have a run longer than 5 yards. Smith ended up being Seattle’s leading rusher, with 22 yards on four carries, but his costly fumble came on a run play from the Tampa Bay 9 in the third quarter.

Few would have picked linebacker Cody Barton as the option to end Brady’s streak of consecutive passes without an interception at 399. But there was Barton dropping into coverage and making a nice play to intercept Brady in the fourth quarter, leading to a Seattle touchdown. Barton’s had a mixed season moving into a starting role, but the nine tackles and interception against the Bucs marked one of his better games.

A big part of Seattle’s defensive resurgence in recent weeks was the impact the pass rush was having on opposing quarterbacks. Facing Brady and the Bucs' quick passing game didn’t allow Uchenna Nwosu, Darrell Taylor or any of Seattle’s pass rushers to cause havoc. Of the 30 dropbacks Brady had in the game, Seattle recorded one QB hit from interior lineman Shelby Harris.

WR Dee Eskridge injured his hand, but it’s not broken, Carroll said. Guard Damien Lewis and LB Jordyn Brooks both left briefly in the second half but returned. Seattle should get back CB Tre Brown following the bye week after he missed more than a year with a knee injury.

150 — All four of Seattle’s losses have come when it allowed more than 150 yards rushing. Tampa Bay, which entered the game as the worst rushing offense in the league, ran for 161 yards against the Seahawks.

After the bye week, Seattle returns home to host Las Vegas. The Seahawks play five of their last seven games at home and leave the Pacific Time Zone just once.