What we learned from Aleutian Isle sinking 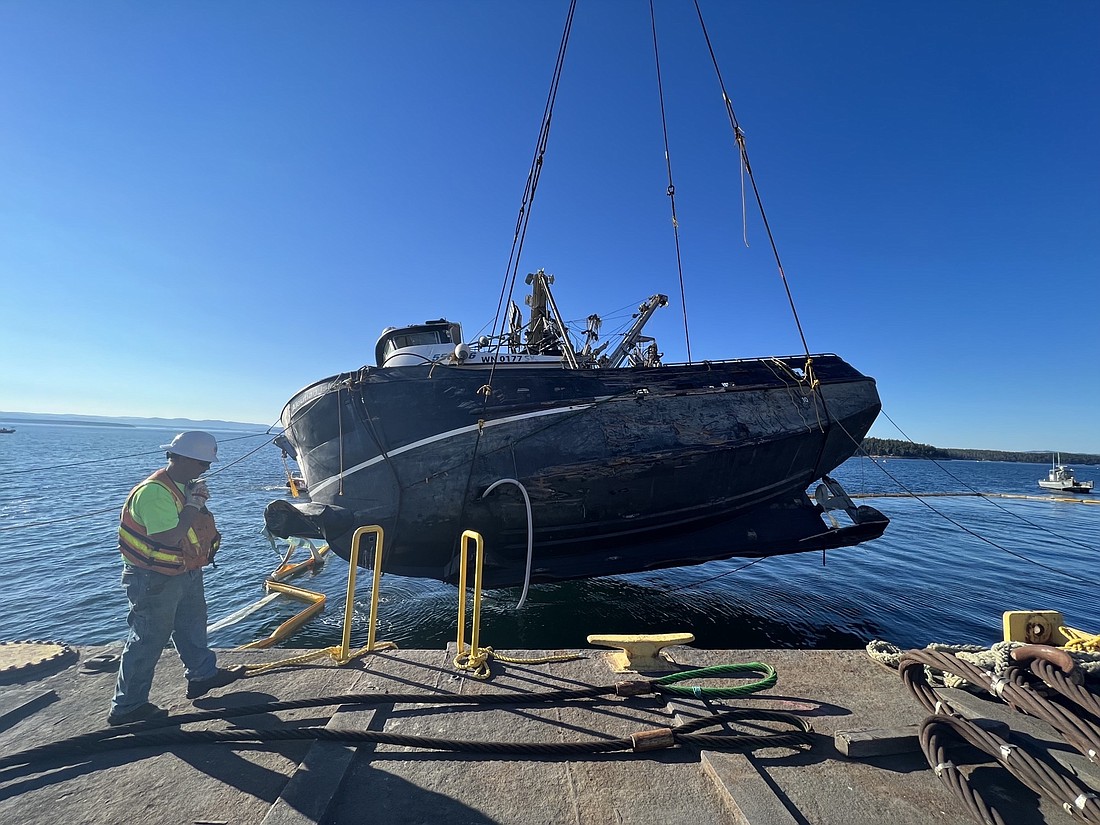 The Aleutian Isle was removed from the Haro Strait after a difficult 39-day recovery mission. (Photo courtesy of the Washington State Department of Ecology)
By Fred Felleman

The rich but vulnerable inshore waters between British Columbia and Washington state, provide critical habitat for 3 pods (J,K,L) of 73 endangered Southern Resident Killer Whales. The western border runs through Haro Strait, which is also the route ships take to the Port of Vancouver — busier than the Ports of Seattle and Tacoma combined.

On Aug. 13, the 49-foot Aleutian Isle, a commercial fishing vessel, sank to a depth of 225 feet in Haro Strait, nearshore the west side of San Juan Island, with over 2,500 gallons of diesel on board.

Fortunately, no one was hurt, but the smell of diesel was thick for three days from my cabin a quarter mile from the incident. Occasional sheens were visible and could still be faintly smelled over the following month. A Unified Command of county, state, federal and tribal agencies as well as the response contractors and vessel owner met daily.  A webpage was created to update the public.

Although it was a “small spill” from a fishing vessel, there are big lessons to learn about the ability to respond to spills in the islands.

The entire orca community approached the evening of the sinking but fortunately reversed course as the tide changed. However, J pod passed by the site several times over the month — luckily when little oil was present.

Despite favorable weather, the current speed and water depth characteristic of the region, as well as delays getting equipment to the island, resulted in it taking over five weeks to raise the vessel. During that time the U.S. Coast Guard and resource agencies were kept appraised of the whales’ location by an ad hoc group of orca-sighting networks comprised of commercial, nonprofit and volunteer organizations on both sides of the border. The goal being if the whales were heading towards the spill, boats would be deployed to “haze” the whales by making underwater noise with metal pipes in hopes to turn them away from the spill.

Drawing from my first-hand observations and decades of experience in this field, these are some initial lessons I’ve learned.

Fortunately, the U.S. Coast Guard was able to be on scene promptly due to its helicopter base in Port Angeles and cutter stationed in Bellingham. While limited response equipment was deployed, it took over a week to get specialized salvage equipment from Seattle. It took two days to even get air monitors on the island to evaluate health risks to coastal residents. Claims that air quality did not significantly exceed background was due to the Department of Ecology missing the worst days.

State legislation will likely be needed to require more oil spill response equipment to be staged in the islands with more residents trained and on standby like a fire department until more resources arrive.

Despite NOAA having developed a whale hazing strategy in 2012, it was not until this event that a small group of boat operators practiced exercising the plan in this prime orca habitat. Given the precarious state of the Southern Resident orca population, more funding is needed to have people trained and ready to haze the whales from encountering oil. Both NOAA and the State Departments of Fish and Wildlife as well as Ecology share responsibilities to improve this capacity, which should be able to be accomplished by updating existing regulations, not legislation.

If it were not for the nonprofit and commercial sighting networks voluntarily sharing their information with the unified command, regulators would have been far less able to include considerations of the whales’ presence in their daily strategies. State and Federal agencies, especially the Coast Guard, need adequate training and resources to coordinate with whale watch companies, researchers and sighting networks across the border, who also need resources, so that they can communicate with commercial vessels and response organizations on an ongoing basis.

Two years ago the Canadian Coast Guard added a “Marine Mammal Desk” to its Vessel Tracking Service (VTS) which assembles whale sighting information from various public, private and government sources.  In addition to providing situational awareness during emergencies, they also share this information with the Port of Vancouver’s ECHO program to reduce the whales’ exposure to underwater noise.

Sen. Maria Cantwell included a similar “Cetacean Desk” pilot project within the Puget Sound VTS in the bill authorizing funding for the US Coast Guard.  Representative Rick Larsen also added language in the House creating grants to increase real-time monitoring of whales. The Aleutian Isle incident underscores the importance of getting these provisions in the final bill.

I am deeply grateful for the collaboration by all involved to make the best of a bad situation. We must also learn from it how we can improve our ability to respond more quickly to a spill in the islands and to keep the whales out of harm’s way.  They’re just one major spill away from extinction.

Fred Felleman is a Port of Seattle Commissioner, killer whale biologist and environmental consultant whose clients include Friends of the Earth.