Grant funding and a full-time executive director kickstart the process 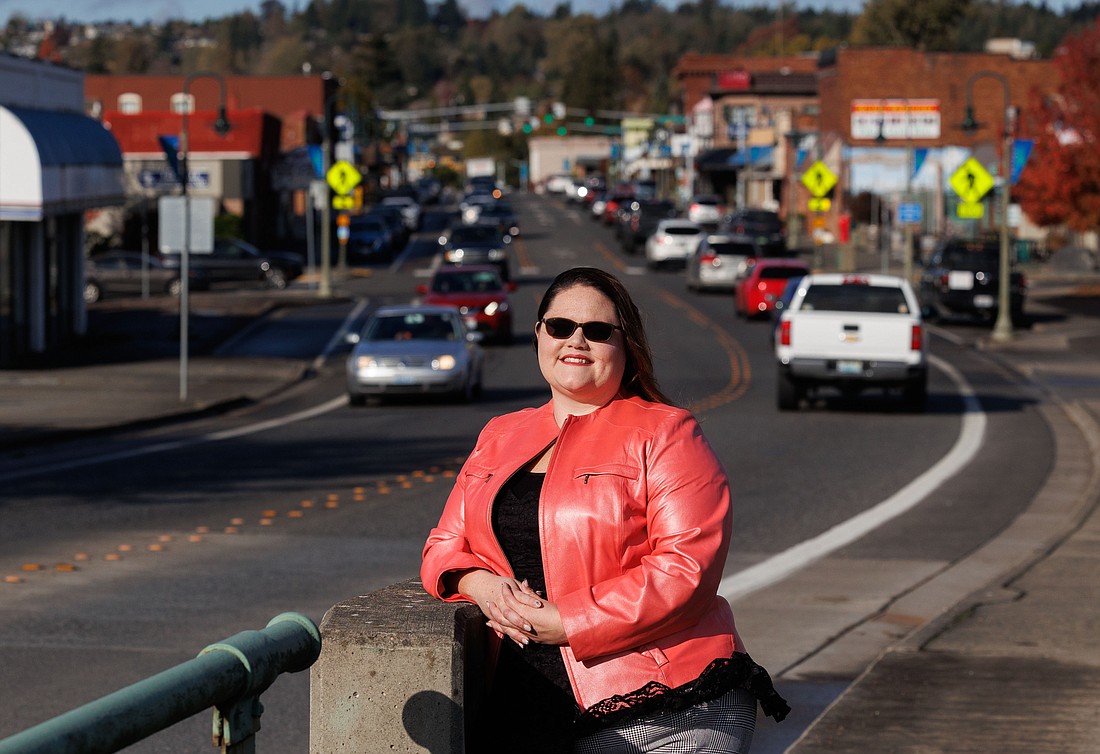 Ferndale Downtown Association’s new Executive Director Melissa O’Brine on Oct. 28. The Association, thanks to state and federal funds, has hired a full-time executive director and is embarking on a program to spruce up downtown Ferndale, promote existing businesses and attract new ones. (Andy Bronson/Cascadia Daily News)

A Himalayan salt cave. Downtown Ferndale is getting renewed time in the spotlight, with illumination provided by a reenergized downtown association.

Ferndale’s historic downtown is easy to overlook if you don’t stray from the immediate area around exit 262 on I-5. Keep going west on Main Street, beyond the shuttered Sonic Drive-In, the Woods Coffee on the left and Samuel’s Furniture on the right. Continue up and right across the Nooksack River and you’ll come to a nearly four-block stretch of Main — from 1st Avenue to just past 4th Avenue plus two blocks on each side — that is Ferndale’s downtown core.

If you’re new to the area, you simply may not drive far enough.

“Ferndale has some great hidden gems that need to be brought to light,” said Melissa O’Brine, the recently hired executive director of the Ferndale Downtown Association.

One of those may be the nonprofit association itself. More than two decades after its founding, Ferndale Downtown (its apparently preferred nickname) now has a full-time executive director and is awarding grants to local businesses in the city of 15,000 to improve both their operations and appearance.

The funding for the association and its latest efforts comes from several sources. O’Brine said a grant from the Washington Main Street Program, overseen by the state’s Department of Archeology and Historic Preservation, plus federal dollars for the city through the American Rescue Plan Act, have fueled association initiatives.

For example, the association’s website lists the Downtown Ferndale Business Revitalization Grant program with $400,000 in federal funding to aid employment and economic development disrupted by the pandemic, as well as another $50,000 “for physical and aesthetic improvements” to the downtown core.

“For the first time in our history we have had the funds and resources to really do the things we’d like to do,” O’Brine said. 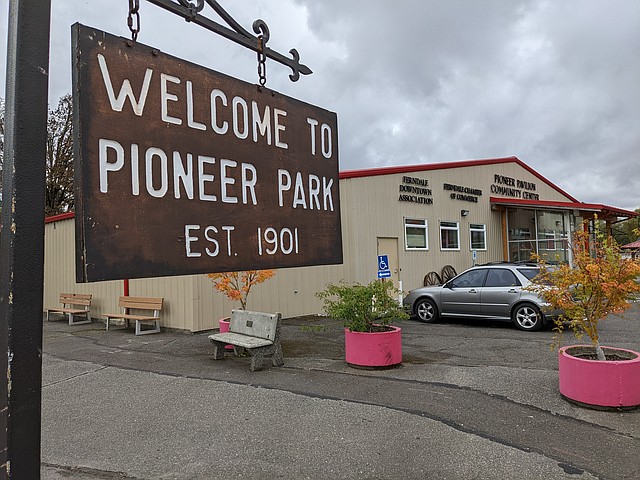 Ferndale Downtown Association is located in Pioneer Pavilion Community Center, along with the Ferndale Chamber of Commerce at the south edge of the historic downtown core, adjacent to Pioneer Park. The association sign was added in June. (Frank Catalano/Cascadia Daily News)

O’Brine’s office — in the same Pioneer Pavilion Community Center building as the Ferndale Chamber of Commerce with new “Ferndale Downtown Association” lettering applied in June — is adjacent to Pioneer Park at the southern edge of the downtown core. It seems an apt setting for merging the historic with the contemporary.

And O’Brine knows the area. She was the general manager of her mother’s bakery downtown, Barb’s Pies and Pastries. She’d already been on the board of the association, which she described as “a group of business owners and realtors who are passionate about Ferndale but all had our own businesses to run.” However, when the executive director position was posted in August, she applied and was hired.

“Our top priority is to finish distributing the funds awarded to the existing businesses for expansion and façade improvement,” O’Brine said. The other top priority, “is the promotion of our downtown and the local businesses that make it unique.”

“She's got a Himalayan salt cave. Amethyst caves with saltwater, a saltwater waterfall,” O’Brine said of Flow Motion. “It's my favorite little oasis in this town. It doesn't get a lot of recognition, especially within Ferndale.” 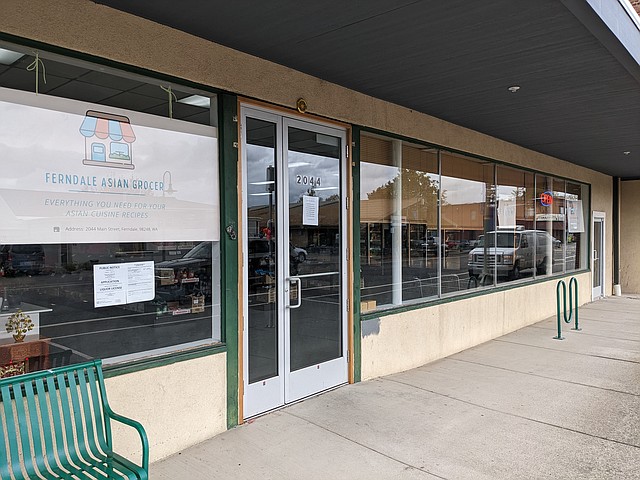 Ferndale Asian Grocer at 2044 Main St. is one of the newest businesses to locate in Ferndale's historic downtown core, as seen on Oct. 26, and is still adding products to its aisles. (Frank Catalano/Cascadia Daily News)

Promoting downtown — and, O’Brine is quick to point out, supporting other businesses outside of the downtown core — comes with a desire to attract new businesses, as well as spruce up the core’s appearance.

“I would like to see some boutique shopping, or arts and crafts types of things — you know, quilting, fabric, yarn — those kinds of things that just you have to go to Bellingham for; there isn't any other option,” she said.

Right now, the emphasis is on the grants, recruiting committee volunteers and both business and individual association members (expect a welcome kit with a mug and window cling). O’Brine also plans to start a newsletter.

Longer term, in addition to recruiting businesses, is learning from other downtown associations, such as those in Blaine and Mount Vernon, and pursuing the four-point approach outlined in the Washington State Main Street Program for Ferndale’s downtown: organization, promotion, design and economic vitality.

“The great things about the Main Street Program are the networking and available support,” O’Brine said. “I’m truly impressed with the program and its honest desire to help revitalize Washington’s downtowns.”

Downtown Bellingham Partnership is hosting its annual Scepter Awards celebration at 6 p.m. on Monday, Nov. 14 at the Wild Buffalo House of Music at 208 W. Holly St. in Bellingham. Ten-dollar tickets include food and entertainment for the event, honoring local businesses and people.

Agritourism deliberations continue in Skagit County as the county holds a series of public meetings on Nov. 10 in Sedro-Woolley, Nov. 16 in La Conner and Dec. 6 in Mount Vernon to discuss policy options. A new online survey is also up at publicinput.com/n5582.

Zane Burger is selling — not just individual burgers, but the entire Fairhaven neighborhood business at 1315 12th St. in Bellingham. An announcement from the company said the retro burger joint with the Ford Falcon roof ornament is on the market and will close after Nov. 13. Zane Burger opened on the spot of Win’s Drive-In, which itself closed in 2016. The news release said Zane’s longtime manager “is retiring from the frontlines and hopes the business can remain part of the community if sold.”