NW Tune-up Festival and beyond 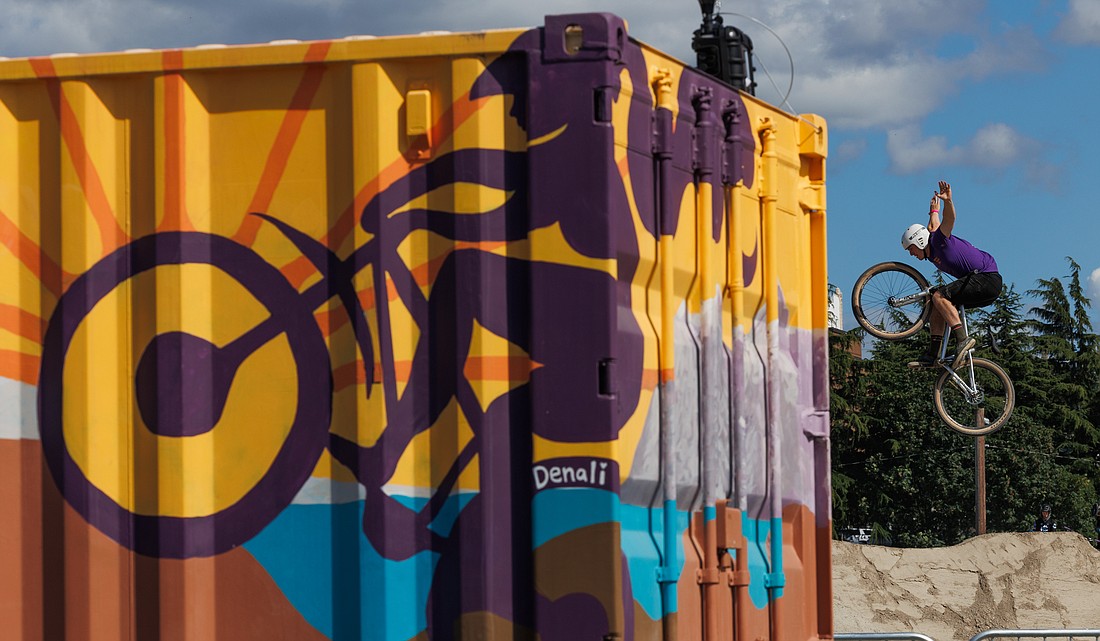 A mural appears to mimic a rider at the pump track at the Bellingham waterfront during the Northwest Tune-Up Festival in July. The inaugural three-day event merged mountain biking and music. Hunter Motto, who was in charge of booking the bands for the festival — and will do so again next summer — is also spearheading the effort behind a new festival, Bellingham Exit, scheduled to make its debut next October. (Andy Bronson/Cascadia Daily News)

When the Bellingham City Council announced last May that it had selected a proposal for funding for a major new music festival to take place in Bellingham, I was immediately curious about who was behind it.

When I heard it was a team led by Hunter Motto, I felt reassured. Motto first got involved with the music industry while a student at Western Washington University, where he was in charge of booking shows for Associated Students. Since then he’s become a talent buyer for the Crocodile Cafe, one of Seattle’s premier music venues.

Motto was also in charge of booking the music for the inaugural Northwest Tune-up Festival in downtown Bellingham in July, bringing in headliners like The Dip, Cut Chemist, and Wolf Parade. Now he is spearheading the effort behind the new festival, called Bellingham Exit, which is scheduled to make its debut next October.

I caught up with Motto recently to get his insights into how these two big events are developing. Our first topic was the new festival. Brent Cole, former editor of the music-focused What’s Up! Magazine — which closed during the pandemic — is helping Motto with the event. That should be welcome news to anyone who remembers Cole’s proclivity for planning massive, all-over-town events.

This new festival will take that to a whole other level, featuring plenty of local musicians, but also regional and national touring acts, in what Motto refers to as a “multi-venue spectacular.” The Wild Buffalo and the Shakedown are already on board, but Motto foresees shows in unexpected locations as well, and a strong visual arts aspect, which will transform even more familiar venues into unexpected experiences.

In general, one of the goals for Bellingham Exit is that it should leave a lasting impact on the city outside of the three or four days each year when it takes place. Motto mentioned creative, lasting artwork, and some kind of “start a band competition” as two ways it might achieve that goal. He thinks of Bellingham as a “land of legendary bands,” and wants Bellingham Exit to help showcase that.

In other great news, not only will the Northwest Tune-up Festival be back at the waterfront next summer, Motto said “We’re going bigger!” Pandemic-related uncertainty made it hard to book touring acts last year. While he’s proud of what they pulled off last year — he singled out PJ Morton’s festival-closing set as a particular highlight — Motto said this year should be even better. They’re also hoping to extend the set times for the headliners, and to change the messaging to emphasize that the festival is for everyone, not just mountain bikers.

When you put all that together, I’d say it adds up to a bright future for Bellingham as a music festival destination.