42nd District, including Shewmake vs. Sefzik, too close to call 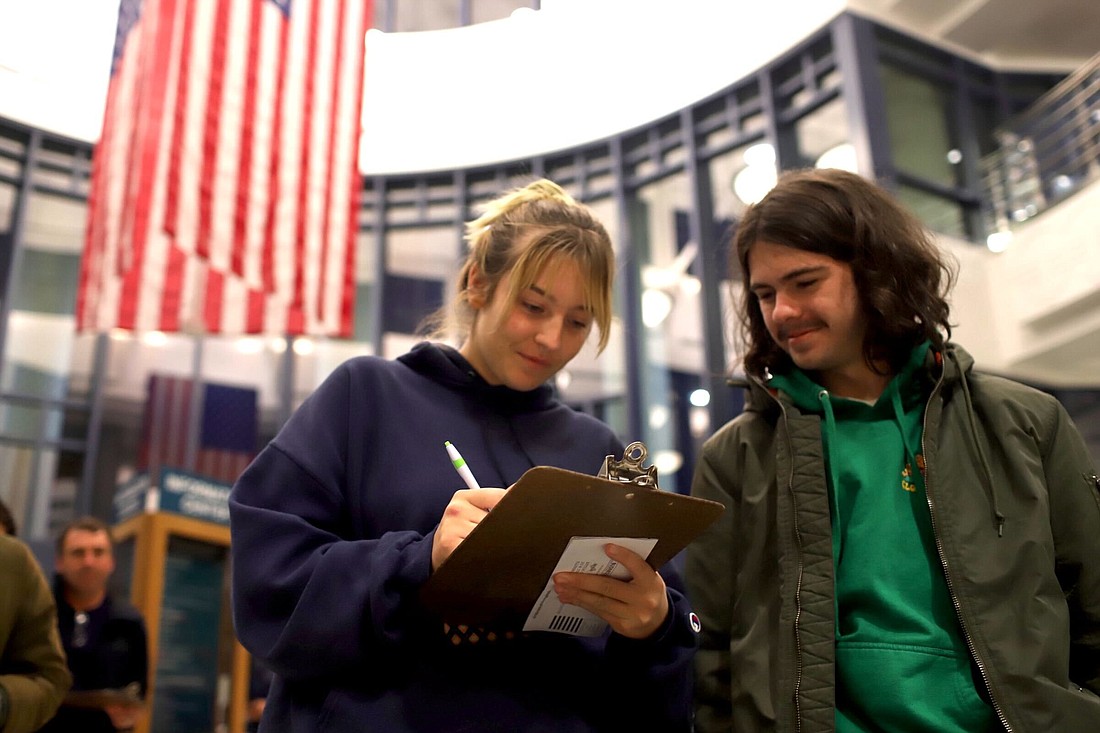 Several races statewide, including in north Whatcom County’s 42nd Legislative District, were too close to call after initial ballot results were released late on Tuesday, Nov. 8. But constituents in the 42nd should have a better sense of who will represent them in the state House and Senate next year after the county Auditor's Office updates vote totals around 5 p.m. on Wednesday.

Auditor Diana Bradrick said Wednesday morning that a larger-than-normal number of voters came into her office on Tuesday to cast their ballots in person, some of them requesting replacement ballots. A faction of election skeptics within the Republican Party had advised people to vote in person on Election Day.

Bradrick said election workers saw "absolutely no disturbances" despite the crowd and a long line.

"People were patient with the line and everything went smoothly, but it was very busy," Bradrick said. The line started to shrink about an hour before the 8 p.m. ballot deadline.

Democrats at a gathering at Hotel Leo in Bellingham were happy with the election night vote totals. All three Democratic candidates in the 42nd District held significant but not insurmountable leads.

At the national level, control of Congress was still up in the air. Republicans were advancing in the House, where a GOP takeover would limit President Joe Biden’s effectiveness over the final two years of his term. U.S. Rep. Rick Larsen, who was winning handily in his 2nd Congressional District race, also may lose his bid to become chair of the House Committee on Transportation and Infrastructure.

The two House races in the 42nd also were close after the first ballot count.

Joe Timmons led Dan Johnson 51.8% to 48.1% in the race for Shewmake’s seat. She will leave the House after choosing to run for the 42nd District’s Senate position, hoping to become the first Democrat in that seat in 20 years.

Incumbent Alicia Rule has the most comfortable lead among Democrats in the 42nd, with 52.1% of the vote in her House race, compared to 47.8% for challenger Tawsha Dykstra Thompson.

Across the state, Democrats also were leading in other swing districts, The Seattle Times reported.

Sefzik remained hopeful of victory, despite a nearly 3% deficit.

"I would love to — if I am elected — set up a listening tour and do some town halls specifically with people that didn’t vote for me and hear their concerns," Sefzik said.

Shewmake said she was hampered in her own late get-out-the-vote efforts, sitting at home with an illness. Her campaign team made 10,000 calls on Monday, reminding likely Democrats to turn in their ballots.

In the 26th District on the Kitsap Peninsula, another swing district where Republicans and Democrats are evenly matched, the early results were split. Incumbent Sen. Emily Randall, a Democrat, was winning after the early vote count. One Democrat and one Republican had leads in the district's two House races.

The 42nd District had the distinction of drawing the most campaign funding in the state, with $5.78 million donated to candidates or spent on independent campaigns as of Nov. 4, compared to $5.6 million in the 26th. Campaign fundraising in the 42nd this year was more than double the total in the district the last time all three positions were up for election, in 2018.

In Congress, Democrat Rick Larsen will handily defeat Republican challenger Dan Matthews and serve a 12th term in the U.S. House of Representatives. Larsen led Matthews 61.5% to 38.3% on Tuesday night.

In his victory speech at Hotel Leo, Larsen allowed that Republicans might take the House after election results are settled nationwide. In that case, he said, Democratic voters need to return the party to power in 2024, to ensure continued commitments to the climate change fight and reproductive rights.

Democracy itself is also at stake, Larsen said.

“It’s not a Republican caucus, it’s Republican chaos,” he told a friendly audience in the hotel’s ballroom. “We need to fight for our democracy every day.”

In the U.S. Senate, incumbent Democrat Patty Murray won easily over Republican challenger Tiffany Smiley, 56.9% to 42.9% as of Wednesday morning. Murray voters dominated in the Puget Sound region, while Smiley's supporters took most of southwest and eastern Washington. The Associated Press reported some surprising victories for Democrats in close races nationwide.

On Tuesday evening, Larsen didn't rule out the possibility he would become the House Transportation Committee's next chairman.

Larsen said Congress will need to protect and build on the gains made in the transportation sector during Biden's first two years, through the Bipartisan Infrastructure Law and the Inflation Reduction Act.

"There's no reason to turn back the clock on transportation investment," Larsen said, and he called for a "cleaner, greener" nationwide transportation system.