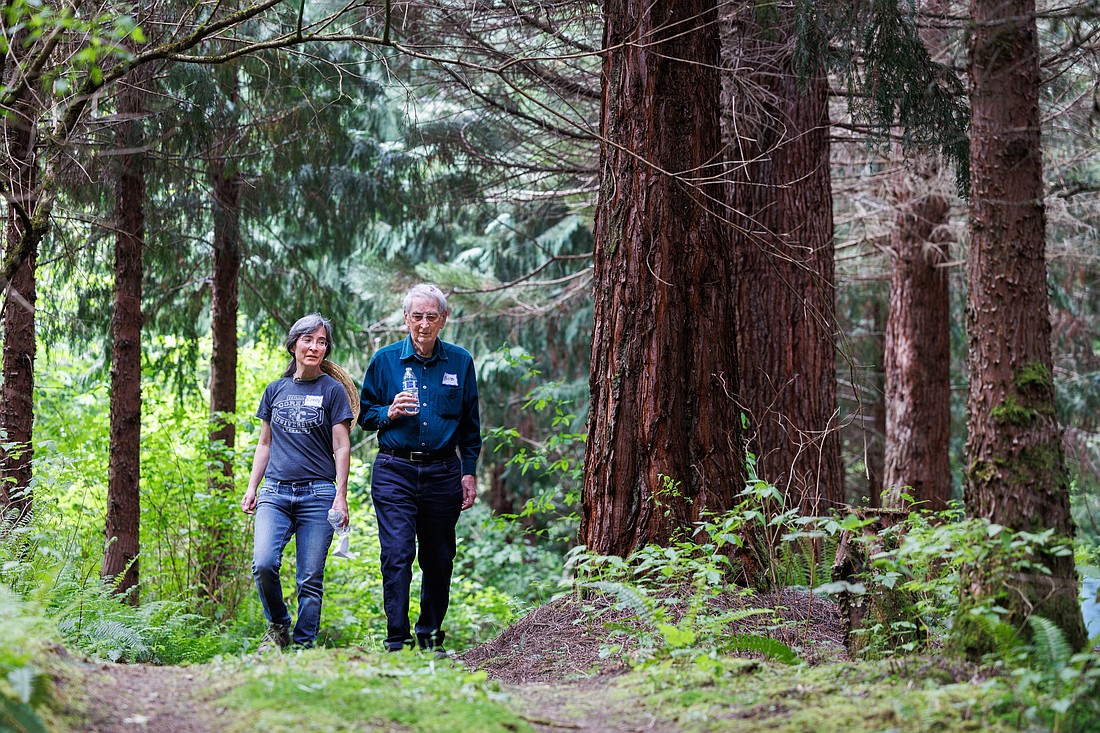 Bob Barker walks by sequoia trees at his tree farm with his daughter Robin on May 21. Bob Barker was named the 2022 Washington Tree Farmer of the Year. (Andy Bronson/Cascadia Daily News)
By JULIA LERNER
Staff Reporter

VAN ZANDT — In 1996, Bob Barker and his wife, Kaz, bought more than 70 acres of land in the Van Zandt area of Whatcom County.

It was acres of flat farmland: Cows grazed across the field, and reed canarygrass, an invasive grass species, stretched as far as the eye could see.

In the 26 years that followed, Barker and his family worked tirelessly through successes and failures to replant the land, converting once unproductive prairie into a self-sustaining forest and repairing salmon habitats.

“It wasn’t easy,” Barker, 93, said during a tour of his tree farm Saturday. “When it was first planted, we planted 5,500 trees. That was in February. In June, you couldn’t see any. The voles had eaten them all up. There were maybe 800 [trees] left.” 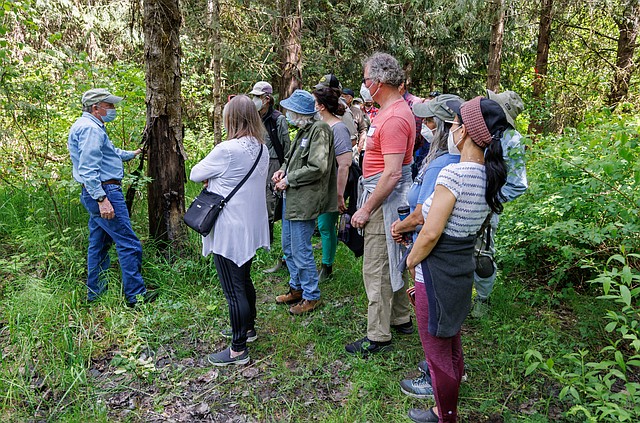 Explaining how a cottonwood tree is managed to keep them from overrunning other trees, Tom Westergreen leads a tour group through the tree farm of Bob Barker. Barker was awarded the 2022 Washington Tree Farmer of the Year on May 21. (Andy Bronson/Cascadia Daily News)

Now, more than 20,000 firs, cedars and alders stretch high into the sky, while Barker’s children maintain trails and gardens around the property.

On Saturday, Barker and his family received the Washington State Tree Farmer of the Year award, recognizing their years of effort on Barker’s “retirement project,” known as the Nelson Road Tree Farm.

The award was presented to them by the Washington Tree Farm Program, a sustainable tree farming group supporting forest farmers around the state.

Barker was surprised by the award, which he said typically goes to farmers sustainably harvesting their trees for lumber and firewood, not farmers conserving swaths of trees.

“The award would usually go to people who were growing trees, producing lumber and doing it in an appropriate and best-practices way,” he said. “That’s not what we have done here, and it’s unlikely that we ever will.”

Coho salmon, found in the Black Slough, thrive in the cooler waters on the property, and the endangered Oregon Spotted Frog has laid eggs en masse there in recent years. 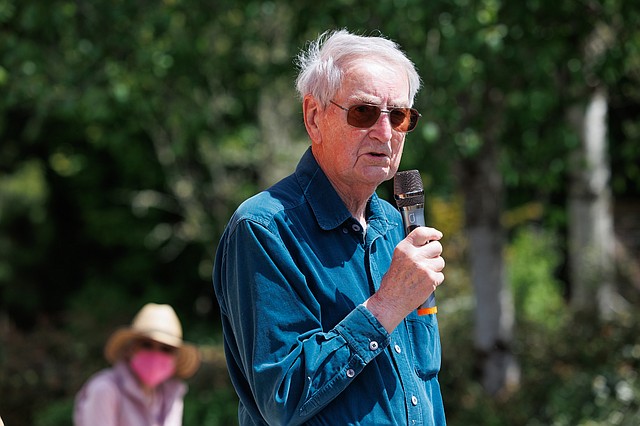 Explaining how his farm came to fruition, Bob Barker talks to guests after he is awarded the 2022 Washington Tree Farmer of the Year on May 21.  (Andy Bronson/Cascadia Daily News)

“[The trees] actually improved the condition of the Black Slough, which actually now is contributing cooler water to the South Fork of the Nooksack River, which is considered ‘highly impaired’ for salmon, in terms of temperatures,” Emily Hirsch, a natural resources specialist at the Whatcom Conservation District, said while on a hike across the property Saturday.

Hirsch assisted the Barker family with the project through the Conservation Reserve Enhancement Program (CREP), operated by the U.S. Department of Agriculture. CREP contracts mean landowners won’t harvest trees in protected areas, particularly along waterways and in riparian zones.

“It’s a voluntary program and landowners can elect a 10- or 15-year contract,” Hirsch said. “The Barker’s farm has already been through one cycle of a contract and has been re-enrolled for another term.”

Dave Tempero, Barker's son-in-law and current manager at the farm, said the CREP contract “is about protecting the waterways and the riparian buffers” locally.

Around 43 acres of Barker’s farm is protected land under CREP, though Tempero said the family doesn’t plan to log any of it.

“This area is perfect for conservation,” he said. “We need to look to manage forests overall to meet the needs of creating timber and wood, as well as creating habitats and worrying about carbon dioxide.”

Tempero retired from the tech industry and assumed maintenance operations at the Nelson Road Tree Farm, though he said it’s been a learning experience.

“One of the fascinating differences, to me, is the horizons we think about,” he said. “In a technology space, or even product space, we were thinking in weeks, months, maybe years. When you think about a forest, you’re thinking about decades to centuries.”

Tempero and his wife, Robin, maintain the 71 acres now, mowing the trails and supporting the trees.

“At this point, we’re just trying to continue to keep the habitat healthy,” he said.

Barker, who lives in Sudden Valley, still makes it out to the farm but has relinquished the reins to his children.