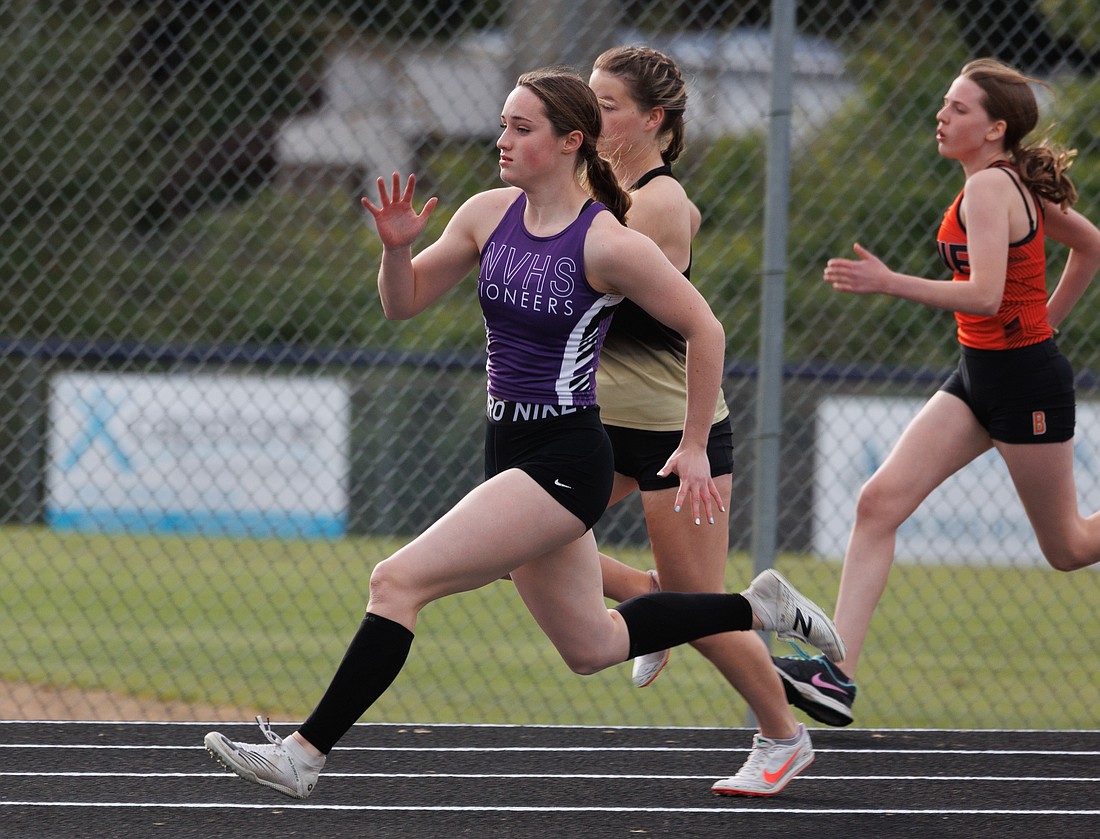 Nooksack Valley's Kate Desilets overtakes her competitors in the 200-meter run during the 1A District 1 track meet at Lynden Christian High School on May 11. (Andy Bronson/Cascadia Daily News)
By HAILEY PALMER
Staff Reporter

Another week of the postseason is in the books and state tournaments are due to start next week.

District 1 won’t have any representatives in the 1A boys soccer tournament this year as Lynden Christian and Meridian were both knocked out in the District 1-2 crossover games.

The Lyncs fell to King’s 1-0 in overtime and the Trojans lost 5-0 to Seattle Academy. Meridian had beaten Nooksack Valley earlier in the week to advance to the crossover game.

The two soccer teams still alive are Squalicum and Sehome. The Mariners beat Archbishop Murphy 2-0 in a loser-out match to advance to the consolation final. Their opponent in that was city rival Bellingham, who had beaten Lynden 2-1 to advance.

Squalicum lost to Burlington-Edison 2-0 in the district championship game, but had already secured a spot in the state tournament. The Storm will be the No. 6 seed in the tournament and was scheduled to play No. 11 Fife Wednesday at Civic Stadium in the first round.

In baseball action, Squalicum was eliminated from the 2A district tournament in a 4-0 loss to Cedarcrest. Meanwhile, Lynden punched its ticket to state with a 10-0 win over Burlington-Edison in the district semifinals. The Lions lost 5-4 to Archbishop Murphy in eight innings in the district title game but were moving on regardless of the outcome.

Lynden was given the No. 6 seed in the state tournament and will play No. 11 Enumclaw at 10 a.m. Saturday in the first round. The game will be played at Davis High School in Yakima.

Meridian enters the 1A tournament as the No. 14 seed and will open play at 10 a.m. Saturday against No. 3 Chelan at Recreation Park in Wenatchee.

Bellingham’s season came to an end with a 16-2 loss to Burlington-Edison, but Sehome earned its way into the double-elimination part of the bracket with a 9-6 win over Archbishop Murphy. The Mariners’ next game was scheduled for 4 p.m. Wednesday against top-seeded Sedro-Woolley at the Janicki Playfields. Also in action Wednesday were No. 2 seed Lynden against Burlington-Edison and No. 6 Squalicum against Lakewood.

In the 1A tournament, top-seeded Nooksack Valley will play Thursday against the winner of Meridian and Sultan. Also on Thursday, Mount Baker will play South Whidbey, Blaine will take on Granite Falls and Lynden Christian is set to play Cedar Park Christian. All games of the tournament will be played at the Janicki Playfields in Sedro-Woolley.

The track postseason is also heating up with sub-district meets completed last week. Teams move on to district meets this week before the state championships next week.