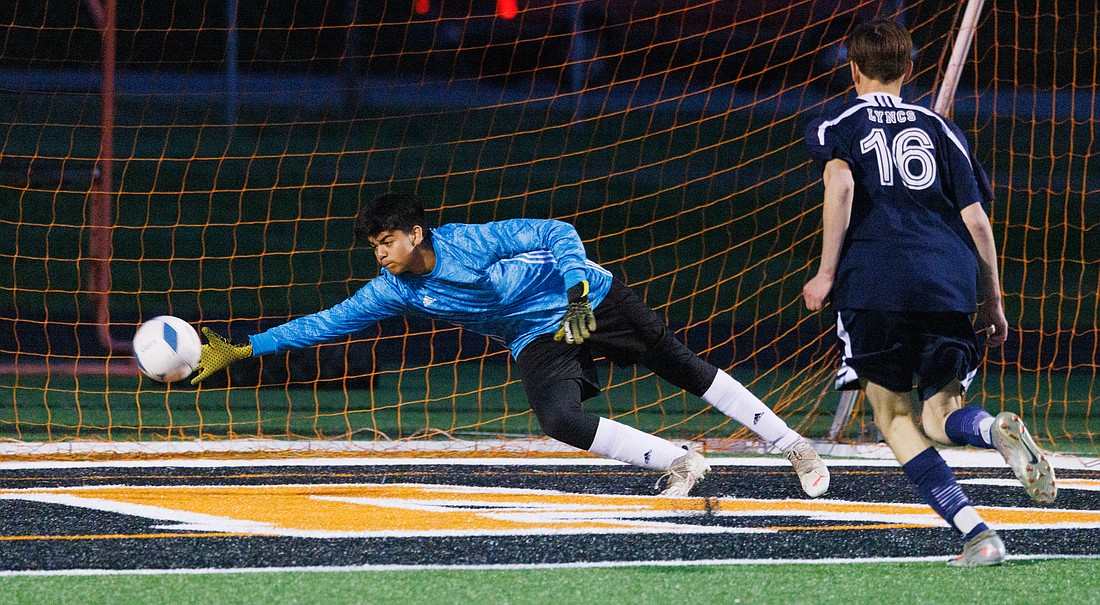 Meridian's Alejandro Santana nearly gets a hand on the ball as the Lyncs score a goal. Lynden Christian beat Meridian 3-1 at Blaine High School on May 7. (Andy Bronson/Cascadia Daily News)
By HAILEY PALMER
Staff Reporter

The first week of district playoffs for baseball and boys soccer wrapped up over the weekend, but most teams will start postseason play this week. Some teams’ runs in the playoffs ended as quickly as they started while others are still in contention for district titles.

One of the bigger surprises of the week was the Lynden Christian baseball team’s season coming to a close with two losses in the District 1-2 tournament.

The Lyncs entered the tournament as the No. 1 seed, but fell to No. 8 South Whidbey 3-0 in their opening game. That loss put Lynden Christian into a loser-out game against No. 5 Blaine.

With both teams’ seasons on the line, the Borderites rolled by the Lyncs 13-3, putting an end to Lynden Christian’s season. Blaine will play No. 6 Overlake-Bear Creek at 1 p.m. Saturday at Sehome High School in another loser-out game.

Meridian split its games last week. The Trojans fell to Overlake-Bear Creek 4-2 but cruised by No. 9 King’s 7-0 to keep their season alive.

Up next for Meridian is South Whidbey in a loser-out game at 1 p.m. Saturday at Joe Martin Stadium. A win would guarantee the Trojans a spot at regionals.

Earlier in the week, the Nooksack Valley and Sehome baseball teams both lost loser-out games in the opening rounds of the 1A and 2A district tournaments, ending the Pioneers’ and Mariners’ seasons.

In postseason soccer action, top-seeded Lynden Christian beat Meridian 3-1 to claim one of two spots in the District 1-2 crossover. The Lyncs will play the No. 4 team out of District 2 Saturday in a winner-to-state, loser-out match.

Nooksack Valley beat Mount Baker 3-1 to stretch its season further. The Pioneers were scheduled to play Blaine Tuesday after press time. The winner of that moves on to play Meridian in a loser-out match.

Over in the 2A District 1 tournament, the three Bellingham schools were given the top three seeds with Squalicum at No. 1, Sehome at No. 2 and Bellingham at No. 3.

The Storm won its first match against No. 8 Cedarcrest 4-0, setting up a match with No. 4 Lynden after the Lions beat No. 5 Archbishop Murphy 2-1.

Sehome narrowly beat No. 7 Anacortes 3-2 to advance. The Mariners will play No. 6 Burlington-Edison as the Tigers beat Bellingham 4-0.

The Bayhawks’ loss dropped them to the consolation side of the bracket, but their season isn’t over yet. Every game will be loser-out for Bellingham and it will have to win its next three matches to advance to state.

Bellingham was scheduled to play Anacortes Tuesday, looking to keep the season going.

In 3A district soccer, Ferndale’s season ended in the opening round last week with a 7-0 loss to Arlington.

More sports are set to start postseason competition this week with sub-regional and district meets and matches for track and field, girls tennis, softball and golf.

By early next week, every sport will be in the thick of the playoffs. By the end of the week of May 23, spring sports will end across Washington with the state tournaments set for the last weekend of the month.