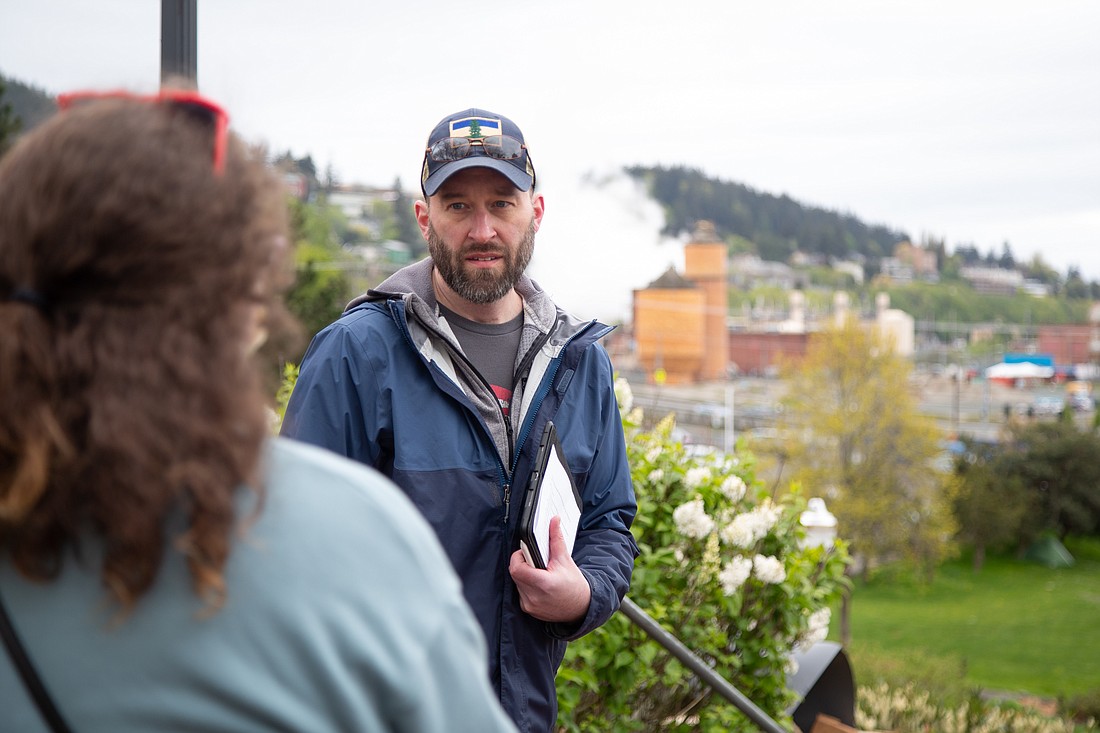 Ian Stacy talks with students about the waterfront from the top of the stairs at Maritime Heritage Park on May 3. (Hailey Hoffman/Cascadia Daily News)
By HAILEY HOFFMAN
Staff Reporter

Last week, a group of Whatcom Community College students roamed around Maritime Heritage Park for a series of micro-lessons about the downtown space from speakers with backgrounds in history, botany and anthropology.

From the top of the staircase behind Bellingham Cider Co., Whatcom history professor Ian Stacy and his students looked out across the waterfront. Stacy dove into its history and the people who worked on it, many of whose stories have been lost.

He talked about Native Americans who fished from the shores, Asian immigrants who staffed the canneries and African Americans who built the railroads, using photos to illustrate. Then, he delved into how those marginalized groups weren't allowed to integrate into Bellingham's society of white colonizers, who ultimately instituted "sundown laws" and kept the communities segregated.

“If we can't recover their voices, we should at least acknowledge that they had a voice,” Stacy said.

In the foliage along Whatcom Creek, Whatcom ethnobotany professor Abe Lloyd highlighted a red cedar, a grand fir, a Douglas fir and red alder. He talked about how the Lummi and the Nooksack used the precious trees to build canoes, make clothes, brew teas and fuel fires. Loggers came and cut down large swathes of Douglas fir for their once-lucrative industrial endeavors, he said. 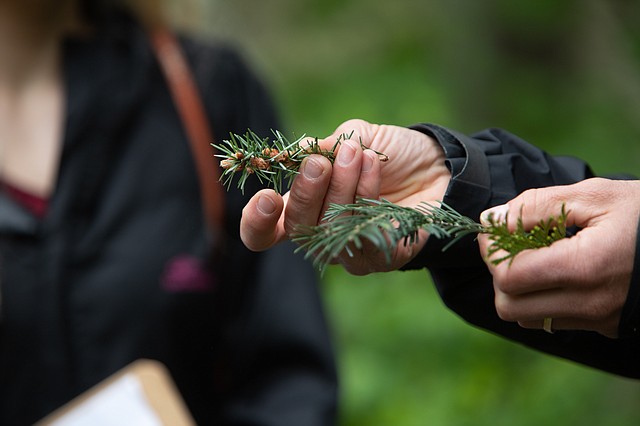 Whatcom anthropology professor Jennifer Zovar led students around the park, exploring the layers of land and explaining how archeologists survey areas to build history through the objects left behind.

“We know that this area has been in use, like this whole region, for at least 6,000 years,” Zovar told the students.

“It's insane to me that I'm 21 and didn't know any of that,” student Melanie McCoy said.

At the heart of the Introduction to the Salish Sea course at Whatcom is the ethic of place-based learning.

Each week, the interdisciplinary course gives students background content to study and takes them on a field trip to various spots from the North Cascades to the San Juan Islands.

There, professors from different disciplines talk about the history, ecological makeup and people who have lived on the land. The program shows how what is learned in each discipline and each region interconnects in the place students call home: the Salish Sea.

This type of learning strays from the traditional Western model of a specialized professor teaching students textbook details about chemistry or history or sociology or communications within the confines of a classroom. Instead, place-based learning follows an Indigenous way of teaching, focusing on the land and learning about the world from its stories. 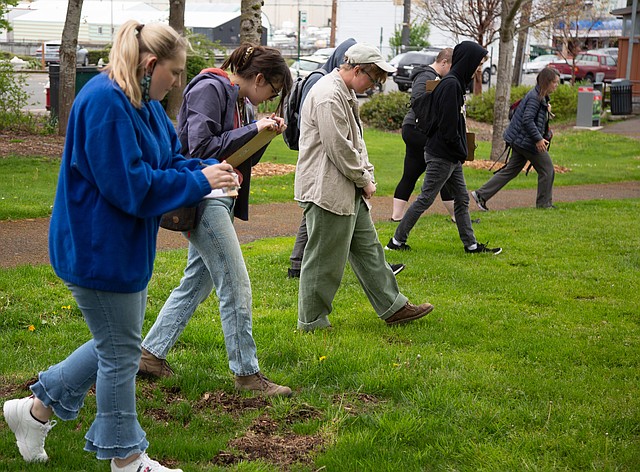 Jennifer Zovar, right, leads students on a survey across the park, encouraging them to look and analyze what they ran across in the grass. (Hailey Hoffman/Cascadia Daily News)

“I think there's an aspect of academic education that's very siloed,” said Anna Booker, one of the creators of Whatcom's Salish Sea program. “The hope is always that students are making those connections between classes that they're taking separately, but I think it's unusual for students to see their professors having those scholarly discussions and problem solving.”

Whatcom's program is an extension of Western Washington University's Salish Sea Institute, which since 2015 has taught Western students about the history of the land, encouraging them to think critically about their place in it.

“Part of it is around supporting students to have experiential learning experiences and this connection to question of the ethics of place, the ethics of our relationships and where we live,” said Natalie Baloy, associate director of Transboundary Initiatives for the Salish Sea Institute.

The class also requires students to take action and engage in the community surrounding an issue important to them. Students can protest or volunteer or help inform the community as part of the class.

"As part of that curriculum development, a big thrust of it was connecting content knowledge to civic engagement," Booker said.

Students take the course for a variety of reasons. Some simply want to learn more about where they live and others because it falls into their direct line of study.

“I'm getting to learn about all the different parts that you would look at as an anthropologist — the geology, the ecology, the people, the local history of the area,” student Antonio Swanaset said. “[It's] everything that you need to see in order to understand the history.”

Swanaset plans to study cultural anthropology to work with his dad who is the Natural and Cultural Resources Director for the Nooksack Indian Tribe.

Whatcom launched its intro class in spring 2020 after it received a $100,000 grant from the National Endowment for the Humanities for two years.

Since then, the five-credit class has been solidified in the course catalog for future years, but the program faculty is lobbying the college for additional yearly funding for the important field trips and experiential lessons. Without the funding, the program will still be able to support small field trips, but wouldn't be able to manage larger journeys out into the islands or up into Canada.