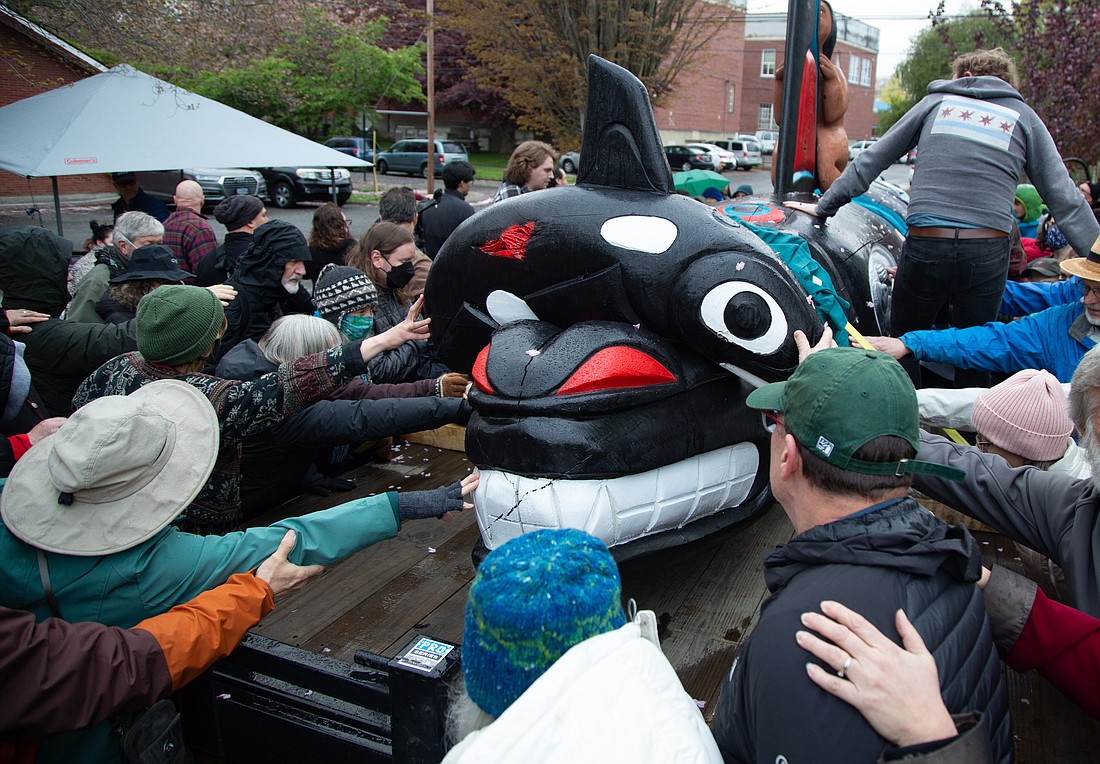 Dozens of people put their hands on the Lummi totem during a blessing from local pagans during the sending off ceremony at Bellingham Unitarian Fellowship on May 3. (Hailey Hoffman/Cascadia Daily News)
By JULIA LERNER
Staff Reporter

A 14-foot totem pole sculpted by master carvers in the Lummi Nation will travel more than 2,300 miles over the next few weeks as part of an advocacy campaign for salmon restoration.

The totem, which features a child resting on an orca atop two large Chinook salmon, was blessed during a ceremony at the start of its journey Tuesday night. Faith leaders from churches around Bellingham joined representatives from the Lummi Nation to pray over the totem and salmon restoration in the region.

The totem is part of a larger advocacy effort from Indigenous nations across the Pacific Northwest. Tribes are calling for the protection and restoration of the Snake River and the Salish Sea by breaching four dams currently on the lower Snake River.

“We are on our way to go to the lower Columbia River and to the Snake River to do what we all have been fighting for a while now, to remove those dams,” said Siam’elwit, a totem artist from the House of Tears carvers of the Lummi Nation. “We need to restore the salmon runs. We need to replenish the food for orcas, our beloved relatives.”

The four dams — Ice Harbor, Lower Monumental, Little Goose and Lower Granite — impede salmon passage through the Snake River, and experts worry it may lead to significant population loss in the Southern Resident orcas, according to a report from the U.S. Army Corps of Engineers, the Bureau of Reclamation and the Bonneville Power Administration. The Southern Resident orcas are considered “Chinook specialists,” meaning most of their diet is salmon, the report said.

“We’re just speaking up for those who don’t have a voice,” Lummi Nation member Doug James said. “For the salmon and for the orcas. They have been trying to put a message out to us for a long time.”

Both Doug James and brother Jewell James, the head carver of the House of Tears, will travel with the totem pole from city to city across the Pacific Northwest, calling on lawmakers to breach the dams. 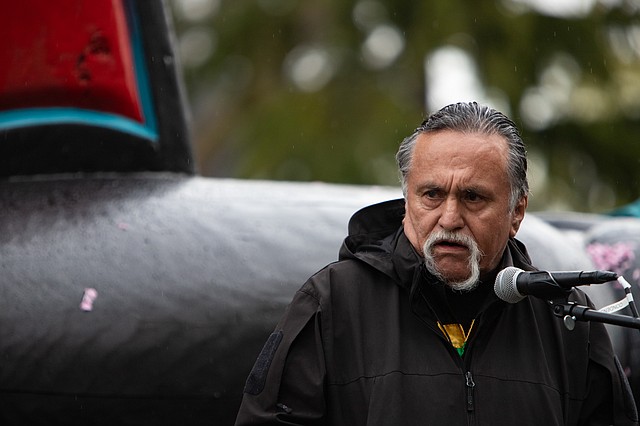 Jewell James, a Lummi carver, speaks to the crowd prior to the blessing. (Hailey Hoffman/Cascadia Daily News)

Each part of the totem is significant, from the massive Chinook salmon at the base to the child sitting on the orca’s back.

“The baby that’s on the nose of the orca, that’s a new addition,” Doug James said. “It represents Tahlequah.”

Tahlequah, also known as “J35” by the scientists who study her, is an orca that made national headlines in 2019 after carrying her dead newborn on her nose for 17 days in the Salish Sea.

Between May 3 and May 20, the totem will stop in several cities and tribelands across the Pacific Northwest. Members from regional tribes, including the Confederated Tribes of the Grand Ronde, the Chinook Indian Nation, Nez Perce Tribe, Confederated Tribes of the Umatilla Indian Reservation, Celilo Village and Shoshone-Bannock Tribes participated in Tuesday’s ceremony, and will travel with the group throughout the totem journey. 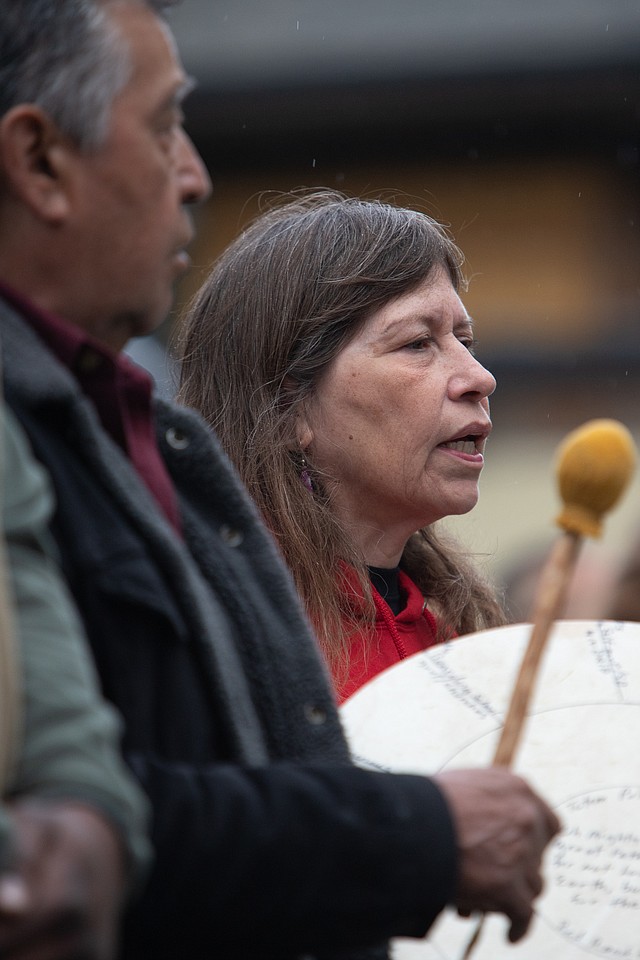 “We are all salmon people,” Siam’elwit said. “We’re on this way to fight for the salmon and then restore the orca population because they will have the food that they need to survive and we will have what we need to survive.”

This totem is not the first Lummi-carved totem to travel the country. More than a dozen massive totems have crossed the United States over the last two decades, including a 24-foot totem pole that left Bellingham last summer.

Last summer's totem, which made more than 100 stops around the country, eventually landed in Washington, D.C., where advocates presented the totem pole to Secretary of the Interior Deb Haaland and the Biden-Harris administration, according to the group's Facebook page. 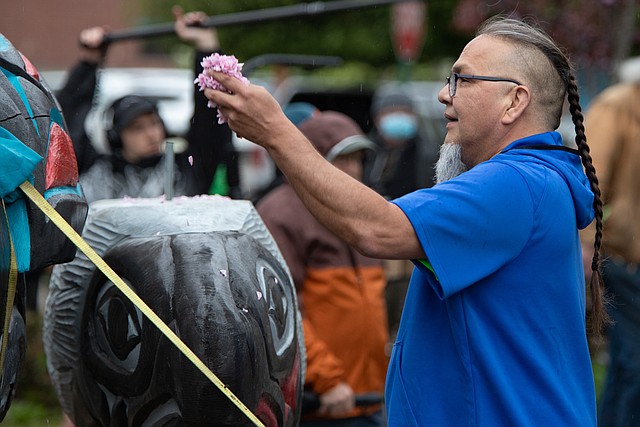