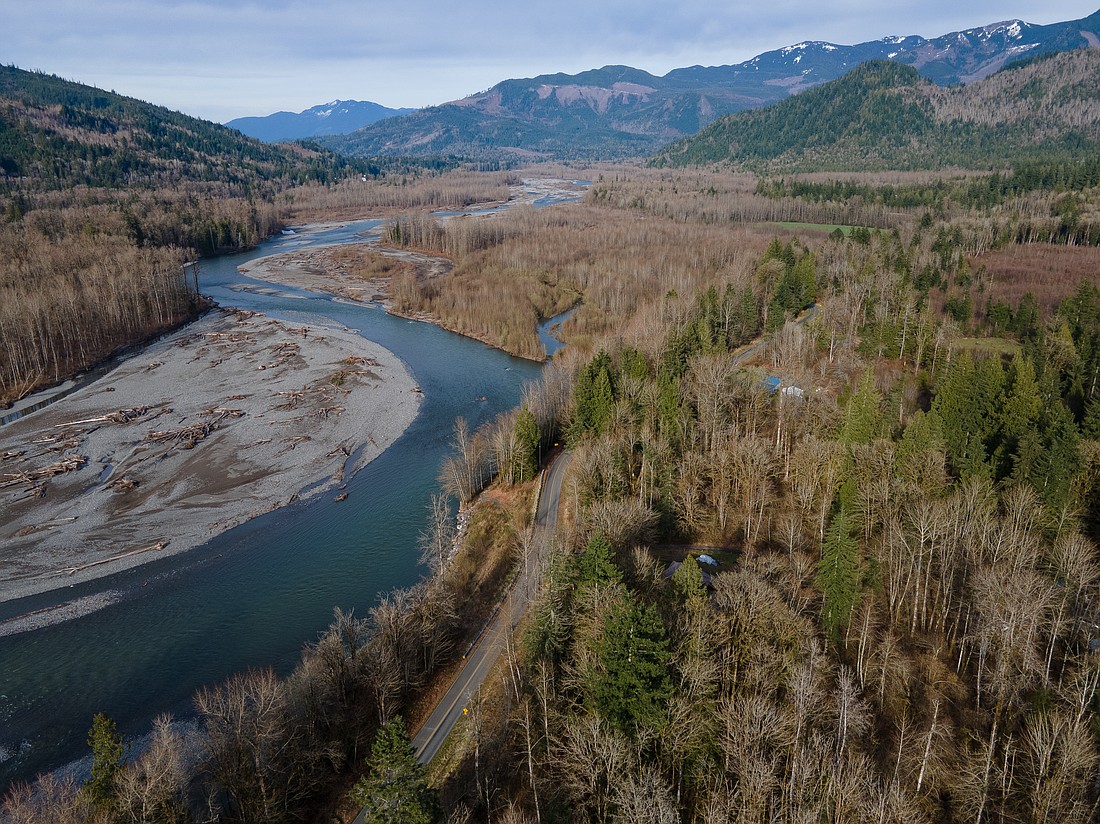 Climate change and adjudication mean less water for agricultural irrigation. Summer is critical because that is when streamflows are lowest, salmon and other wildlife most need ample cold clear water and human use of water, primarily for irrigation, is greatest.

Farmers are most at risk because they are the dominant water user in Whatcom County, accounting for 70% of the summer total. And up to half of the water farmers use lacks legal authorization.

Over the past five decades, Nooksack River flows at Ferndale decreased at an average of 0.5% per year. During the past 12 years, flows declined by 5% per year. Results are qualitatively similar for other locations within the watershed: summer flows are declining and doing so at an accelerating pace. The future is even grimmer: flows in 2050 might be 35% to 50% less than historical averages.

The Washington State Department of Ecology, in 1985, issued a rule that established minimum flows at 30 points throughout the basin. The rule is often not met, which suggests that fish need more water during the hot summer months. Also, the amount of summer rainfall has been and will continue to decline, increasing the amounts of water needed for irrigation.

Ecology began preparing for adjudication in July 2021. Adjudication, to begin in July 2023, will confirm who has the right to use water, how much, where and when. The most important elements of this process are Tribal treaty rights and farmer rights to irrigation water. Lummi Nation and Nooksack Indian Tribe hold rights reserved by the 1855 Treaty of Point Elliott for (1) sufficient instream flows to support salmon and other wildlife, and (2) on-reservation water to support tribal economies and lifestyles.

After Ecology files its report in mid-2023, the judge will begin legal proceedings to determine the validity of the nearly 6,000 claimed water rights. The judge may start with the most senior and largest water rights, those belonging to the two tribes. My guess is that the judge will grant the Tribes the right to instream flows equal to or greater than those specified by Ecology’s 1985 rule.

Farmers will be allowed to use less water because (1) many farmers are not legally entitled to much of the water they now use, and (2) their use of water likely reduces streamflows, impairing Tribal rights.

Stop fighting adjudication. Farmers oppose adjudication because it might take decades, be expensive and deal only with water use, not water quality and habitat. Although they are correct, an alternative scenario may be more likely: the start of adjudication and the recognition that the tribes hold the most senior and largest water rights will strongly motivate water-right holders to negotiate a solution to avert a formal court decision.

Also, continued farmer opposition may anger those who favor adjudication, especially the two tribes. Finally, the farmers have offered no alternative to determine who has valid water rights.

Install water meters on a representative sample of farms and report data to the public on actual (not estimated) water use. Although various estimation methods exist, they differ substantially and have not been validated with local real-world data. Absent metering, there is no way to ensure that farmers use no more water than what's allowed by their rights.

Determine whether water-use efficiency works. Use water-meter data to document the benefits and costs of improved irrigation technologies, better maintenance practices for irrigation equipment, and sophisticated irrigation scheduling methods. Focus initially on better methods to decide when and how much to irrigate. Such software requires no capital equipment, could cut water use 10% to 20% and is rarely used. If a local entity (e.g., Ag Water Board or Whatcom Conservation District) trained the managers of the 100 largest farms, this would affect more water than all Whatcom households, combined, use.

Other options include switching to crops that are less water-intensive; increasing soil organic matter; deploying satellite imagery, drones, and soil-moisture sensors to better manage water use; and fallowing land with poor-quality soils.

Whatcom farmers are a critical part of our water-resource problems because they use so much water during the summer. They are also an essential part of the solution, for the same reason. These problems can be resolved. Farmers must be flexible and accept the certainty of climate change and the near-certainty of adjudication. And the tribes, City of Bellingham, Whatcom County, Ecology, Whatcom Conservation District and others should provide technical and financial assistance to farmers during this transition to a more efficient, sustainable water and agricultural future.

Eric Hirst, a retired energy policy analyst, is a long-term environmental activist and has lived in Bellingham for almost 20 years.