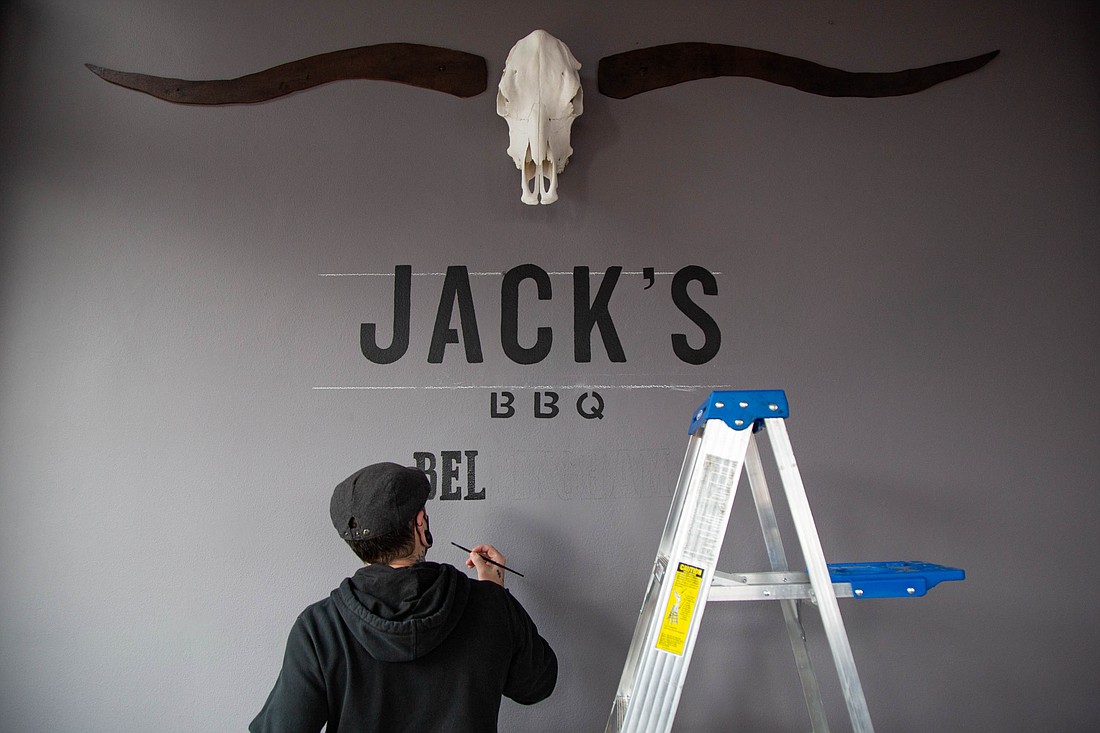 Kitchen manager Colby Fowler paints the Jack's BBQ logo on the wall of the restaurant on Feb. 16. Fowler, who has been in Bellingham for over 20 years and most recently worked at Fat Pie Pizza, manages the back of house at Jack's. (Hailey Hoffman/Cascadia Daily News)
By JAYA FLANARY
Digital Editor

The empty space on the first floor of the old Puget Sound Energy building will no longer loom over the corner of Magnolia and North State Street: Seattle’s well-known Jack’s BBQ is coming to Bellingham.

In a town where tofu and other meat substitutes are favored, restaurants close early most days of the week, and breweries outnumber classic cocktail bars, Jack’s BBQ is here to smoke out the whole downtown.

Not really, but they do plan on covering the “eyesore” — their huge smokers, ready to nourish us with real meat — in the parking lot with murals by local artists.

“What’s funny is that those are the smallest [smokers] in the company. All the other ones are a chamber longer,” said Travis Zale, General Manager. 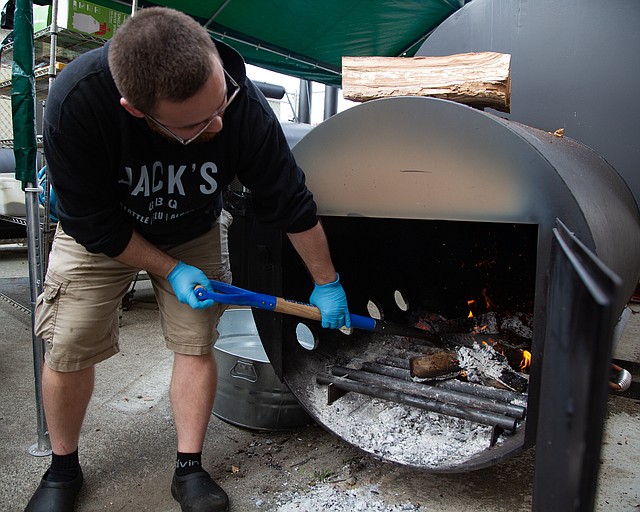 Pit master Joe Whalen manages the smoker on March 29. All of Jack's meat is regionally sourced and will be smoked with fruitwood from Eastern Washington and mesquite wood imported from Texas. (Hailey Hoffman/Cascadia Daily News)

Starting April 5, Jack’s BBQ will serve breakfast, lunch and dinner from about 8 in the morning until 8 p.m. on Tuesdays, Wednesdays and Sundays, and until 10 p.m. on Thursdays through Saturdays.

Before 11 a.m., breakfast tacos — egg and potato, brisket, sausage or bacon — will be available to-go (perhaps upstairs to the Cascadia Daily newsroom) with a side of green salsa, made in-house.

“We pickle everything ourselves,” said Colby Fowler, Kitchen Manager. “Jalapeños, onions, eggs, okra — we do it all, everything’s from scratch.”

The menu, which is still being finalized by Fowler, will include most of the following: ground brisket burgers every day (unlike their Seattle locations, which offer them weekly); smoked beef ribs (Zale calls them “caveman ribs”); tacos with the smoked beef leftovers; prime rib on Fridays; sides like potato salad and braised cabbage (Fowler wants to incorporate German-style food because central Texas has a large German immigrant population); soup and sandwiches (French dip and BLT are in the works); holiday pre-ordering of turkeys and other meats; and eventually, catering options. 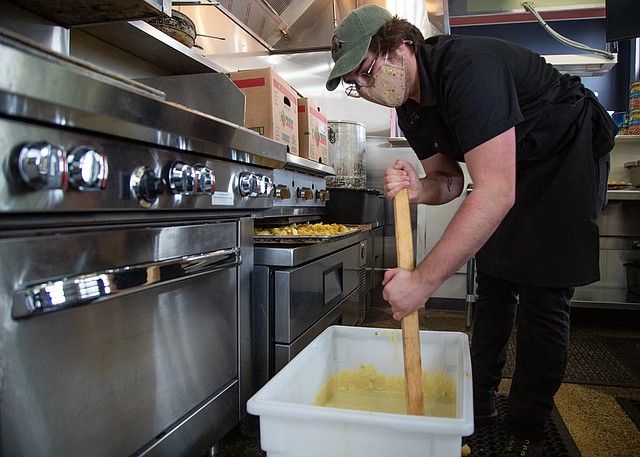 Line cook Alex Miller mixes a large batch of potato salad in a bucket. The menu, which is still being finalized by kitchen manager Colby Fowler, will include sides like potato salad and braised cabbage. Fowler wants to incorporate German-style food because central Texas has a large German immigrant population. (Hailey Hoffman/Cascadia Daily News)

All the meat is regionally sourced, and a majority comes from Double R Ranch in Okanogan County. It will be smoked with fruitwood from Eastern Washington and mesquite wood imported from Texas.

And, as enticing as the meat, meat and more meat seems, Fowler’s time cooking in Bellingham has taught him that he needs vegan, vegetarian and dairy- and gluten-free options. Jack’s will offer plenty of salads, such as caesar and a Cobb, as well as smoked meat substitutes (ideas being thrown around are mushrooms and onions).

“This will be a great place to get the evening started, get a snack before you go out,” Zale said. “During the day, it’s just a really laid-back atmosphere. We’re big on the southern hospitality.”

Fowler, who has been in Bellingham for over 20 years and most recently worked at Fat Pie Pizza, manages the back of house. In his “younger years” he worked for a family butcher shop, and upon returning to Washington started cooking.

His partner-in-crime, Zale, manages the front. Zale, whose degree is in Hotel and Restaurant Management, grew up raising cattle and pigs in Central Arizona.

Point is, these guys know meat.

They’re also pretty handy — they’ve spent the last few months scavenging the basement of the nearly century-old building for scrap metal and wood, building a lot of what customers will see at first glance in the dining room. Zale is especially proud of his wooden chandelier, while Fowler, also an artist, hand-painted the logo’s steer horns on the walls.

Fowler, who started working in kitchens as a dishwasher, is fully aware of the downfalls of the restaurant industry.

“I understand that people are super tired of poor management and poor pay, and everything that falls into that,” he said. “As someone who has come from that, my goal is to not do that.”

The duo calls the Bellingham location the “fanciest” Jack’s. At its core is a beautiful mahogany bar that will be the home to not only a dozen $5 beers on tap, but also classic cocktails made from in-house ingredients.

The focus on classic cocktails came straight from the top: owner Jack Timmons, who doesn’t want his “grown-up” barbeque with a big red soda or a sweet tea.

He wants it with “a friggin’ drink.” 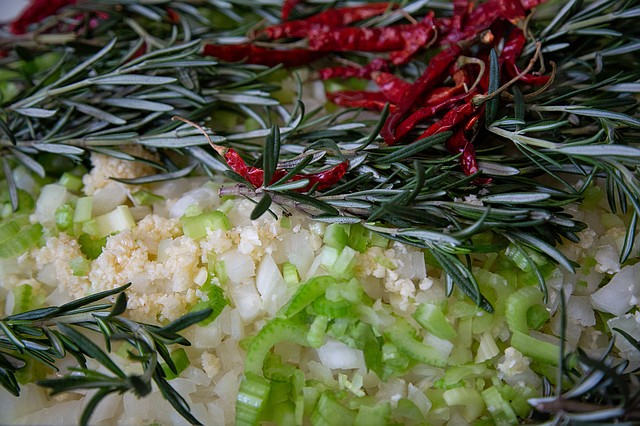 Chopped onion, garlic, celery, rosemary and chilis sit ready to be cooked. “We pickle everything ourselves,” said Colby Fowler, Kitchen Manager. “Jalapeños, onions, eggs, okra — we do it all, everything’s from scratch.” (Hailey Hoffman/Cascadia Daily News)

Timmons grew up in Dallas, Texas, but moved to Seattle three decades ago for a job with Boeing. Eventually, he worked at Microsoft — but he always had a barbecue pit in his backyard.

“Because I’m from Texas,” Timmons said, with a Matthew McConaughey-like drawl.

In 2012, he attended every barbecue lovers’ dream: BBQ Summer Camp at Texas A&M’s Meat Sciences department, to learn everything he could about smoking meat.

“They have guys with PhDs in meat,” Timmons said. “They even have a barbecue 101 class for their students.”

Following summer camp, he went to central Texas where he learned that the area was settled by Germans and Czechs, who only seasoned meat with salt and pepper. Timmons returned to Seattle ready to smoke meat for the whole city.

Which he sort of ended up doing.

He started throwing barbecue parties, which turned into larger, sold-out ticketed events, including one for Amazon. Timmons knew he needed a real restaurant — he quit Microsoft in 2014, his “perfect midlife crisis” — so he and his buddies bought a little place in SoDo, his first of four locations in the south Seattle region.

He soon had a line out the door.

“I knew that good barbecue was not an overserved market in the northwest,” Timmons said. 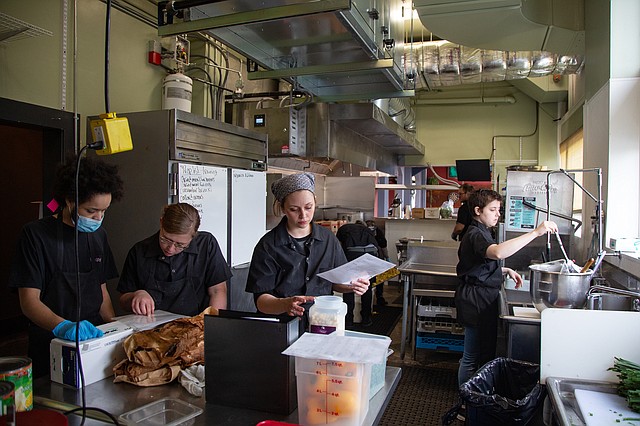 The kitchen workers begin prep prior to the restaurant opening on March 29. Opening soon, Jack’s BBQ will serve breakfast, lunch and dinner from about 8 in the morning until 8 p.m. on Tuesdays, Wednesdays and Sundays, and until 10 p.m. on Thursdays through Saturdays. (Hailey Hoffman/Cascadia Daily News)

Following SoDo, Jack’s BBQ popped up in South Lake Union, the Columbian Tower food court and Algona. With the newest location in Bellingham, Timmons plans to wait for additional expansion.

“Bellingham is one of those places — everyone dreams about hanging out there,” Timmons said. “It’s a charming place.”

Though he still lives in Seattle, expect to see Timmons at the State Street location every once in a while. He is the epitome of Southern hospitality, and he isn’t afraid to make you know it. Also, you’ll know his voice when you hear it.

“My family is one of those houses where you couldn’t walk in the door without them offering you a drink,” Timmons said. “The restaurant part is super easy. I walk around and talk to customers, give them pit tours, tell them about the history of Texas barbecue. I’ve done it a thousand times and I’ll do it a thousand more.”

After working so long in the tech industry, where projects take years to develop, Timmons believes he found his calling in barbecue.

“Barbecue is my attention span, right? It's low and slow. It takes you 14 hours to make a brisket,” he said, “but you sell ’em every day.”

This story was updated on April 1 at 11:30 a.m. to reflect the restaurant's new plans to open early.