Some could lose vehicles to 'safety, environmental' concerns 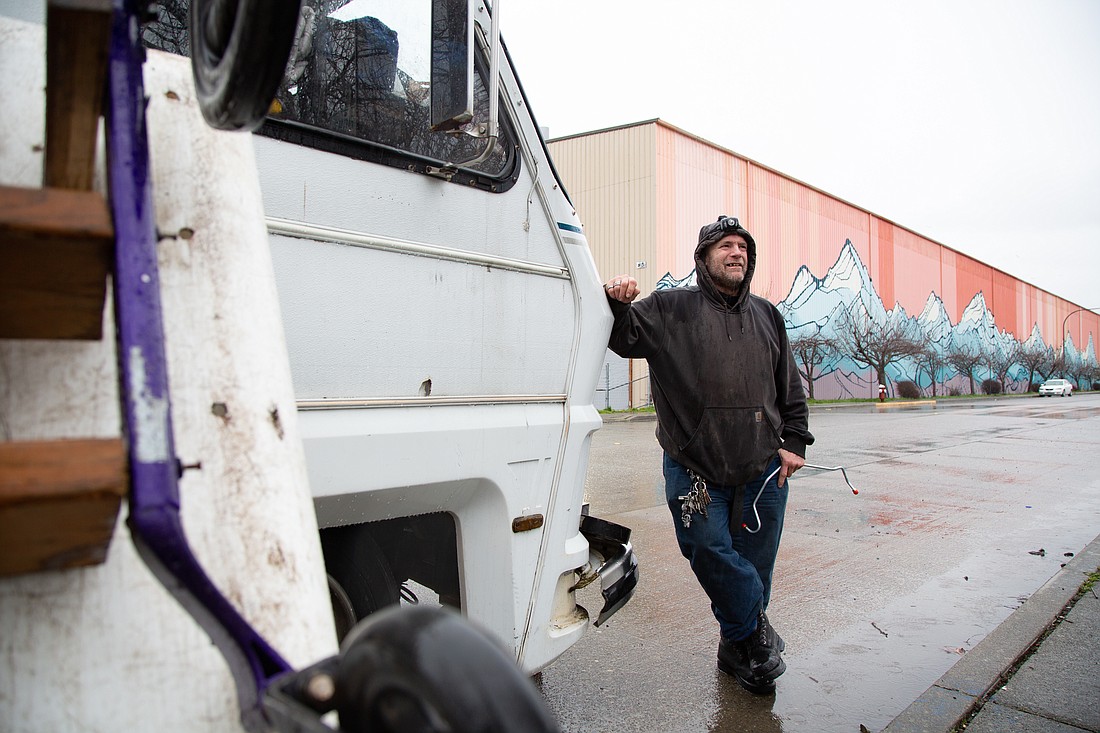 Ed Hunt stands outside his RV on Cornwall Avenue on March 16. Hunt has lived along the road for more than a year. (Hailey Hoffman/Cascadia Daily News)
By KAI UYEHARA
Staff Reporter

Ed Hunt’s inoperable recreational vehicle is parked alongside Cornwall Avenue near the Bellingham Shipping Terminal. A few of his belongings sit outside the rig, such as his cooking grill and a collection of his friend’s possessions beside the door.

Hunt, who is living in the RV after losing his farm, said he has parked in the same spot for about two months because his de facto home doesn’t run. As he spoke with Cascadia Daily News outside his banged-up rig, Hunt unboxed a part needed to fix the vehicle.

Hunt’s vehicle is one of several parked on Cornwall, and one of many parked around Bellingham serving as living quarters.

But Hunt and others living in cars and motorhomes during the COVID-19 pandemic face mounting pressure to move as city officials and some residents worry their presence poses a safety and environmental risk.

After a moratorium on the 72-hour parking rule was lifted on Nov. 30, 2021, police have been enforcing the law.

Hunt said he was able to park in one spot for 16 months during the pandemic because of the moratorium. 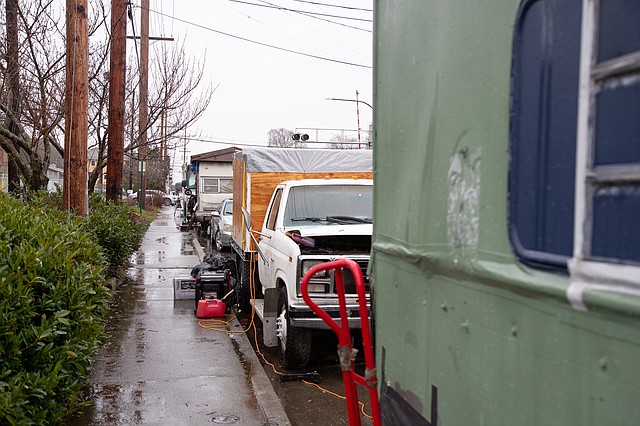 Many RVs park along Cornwall Avenue near the waterfront. They are subject to Bellingham's 72-hour parking rule just as all vehicles are. (Hailey Hoffman/Cascadia Daily News)

A friend of Hunt’s had her vehicle towed the day before he spoke with Cascadia Daily News.

When a vehicle has been on the street for more than three days, it is towed and can be reclaimed by the owner later. But, it isn’t usually that simple when it comes to occupied motorhomes, Murphy said.

When officers resumed enforcing the 72-hour rule in November, they realized that some vehicles were immobile or not roadworthy, Murphy said.

Many of the vehicles are considered automobile “hulks;” a legal term meaning they are inoperable. If the vehicle is considered a hulk after inspection, the owners are given 15 days to fix the issues or move it.

Because his vehicle is immobile, Hunt worries that his RV could be towed any day. He has a tent to live in if that ever happens.

“Weekdays, I gotta be here between 8 o'clock in the morning and 5 o'clock at night because that's when they'll come,” he said.

Most of the occupied vehicles likely won’t be fixed or moved, Murphy said. And many occupants of the RVs aren’t the owners, or they don’t have proof of ownership, so they wouldn’t be able to reclaim their vehicle from a scrapyard.

Hulk vehicles not fixed or moved are towed to a scrapyard and destroyed. This costs $1,500 to $2,500 per vehicle and expenses are paid with Bellingham’s solid waste fund, Murphy said.

People live in vehicles on the streets for many reasons, she added. Some move into a vehicle after losing their home; some take over abandoned vehicles, some are there by choice, and she said some really just want to be left alone.

John Patterson lives in an RV near Hunt. He traded his truck for the RV and he’s been living in it for about a year. He said it is difficult to move every three days, especially since his alternator is missing.

“That 72 hours is lame; it’s not like we’re sitting in a neighborhood or anything,” Patterson said. “We're just in a business park.”

Murphy said police tow as a last resort. But when it happens, officers work with the occupants to collect their belongings before the vehicle is destroyed.

For Murphy, enforcing the parking rule is a necessity, because letting the occupied vehicles stay is an issue of law, safety and humanity, she said.

“Sometimes, I have to get people out of their own places that are so inhumane for them to be in, that realistically, taking their vehicle is a more humane option than leaving them in that vehicle,” Murphy said. Some have garbage, human waste and rat infestations, she added.

Moving the RVs stops waste from building up indefinitely. The difference in garbage pileup between RVs that move regularly versus those that don’t is staggering, Murphy said.

She added that some parked RVs cause ecological damage by depositing garbage, feces and their blackwater tanks that collect waste from the toilet into streets and waterways. Some people just let garbage pile up.

“There's no amount of garbage bags that we can give them that's going to make them clean up because they hoard junk,” she said.

Hunt puts his garbage into heavy-duty trash bags brought to him by Public Works and leaves them next to the sidewalk for pickup, which is done regularly, he said.

The Bellingham police and the Opportunity Council, a private, nonprofit agency serving the homeless and low-income people, will soon begin handing out purple trash bags in hopes that vehicle occupants will dispose of their garbage easily for Public Works to collect.

“I wish everyone that I talked to would just take us up on the services that we have to offer here in Bellingham or take the Opportunity Council or GRACE (Ground-Level Response And Coordinated Engagement) or HOT (Homeless Outreach Team) up on their services and they just don't,” Murphy said.

Police offer occupants a chance to meet with representatives of HOT to discuss resources available to them.

Patterson would rather live in his tent than stay at the Lighthouse Mission’s Base Camp because he said he dislikes the people who live there.

He and Hunt both wish they could just park in an empty space indefinitely, rather than constantly move or worry about losing their RVs.

“If they’d give us some place where we could go, that’d be all right,” Patterson said. “There’s gotta be a parking lot somewhere they’re not using.”

In a meeting with the City Council on March 14, Murphy said opening private property to park RVs is not realistic, as a property owner would have to enforce the parking code instead of police.

“We are treating a symptom here and the only thing that I'm doing is making sure that I don't have rigs that are creating an unsanitary, unsafe environment for the city, for the community, for whatever neighborhood they're in,” Murphy said.