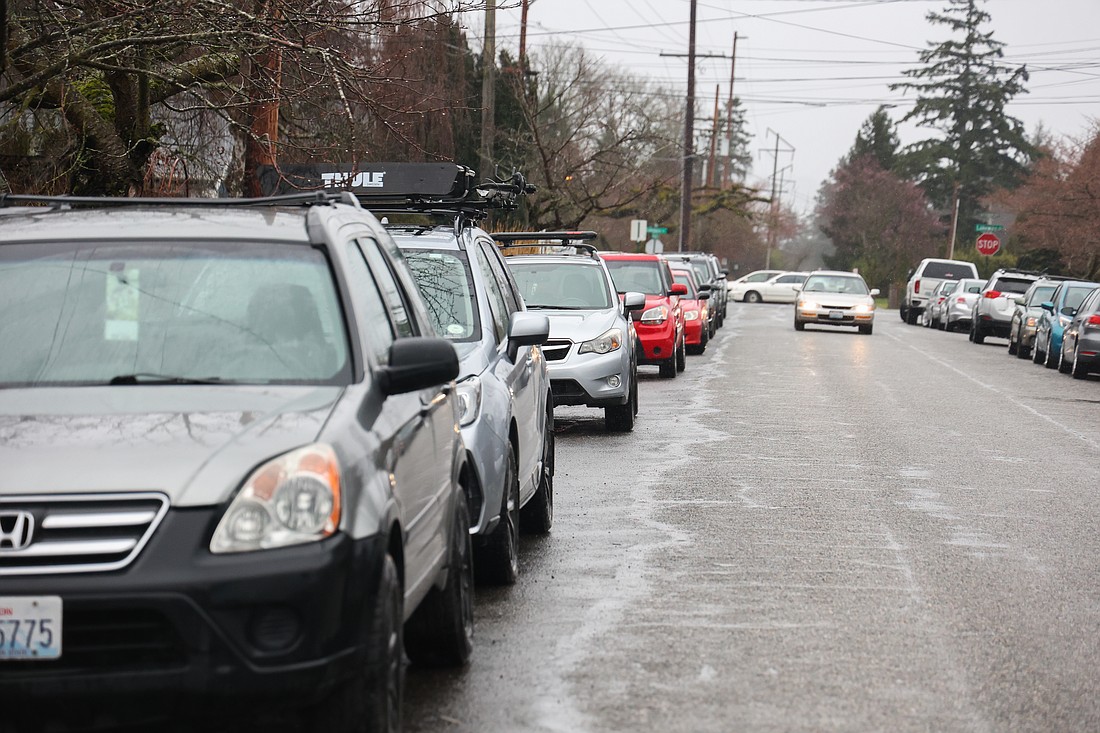 The security camera footage isn’t especially dramatic, except maybe for the owner of the white Ford F-350 pickup visible on the left side of the frame.

The camera recorded what was described on the social media site NextDoor as a crime in progress: Just after 9 a.m. on Jan. 20 in downtown Bellingham, someone wearing a hoodie and a backpack approaches the driver’s door. Less than 30 seconds later, they are in the truck. Less than 20 seconds after that, a plume of white smoke bursts out of the tailpipe. Seconds later, the truck is gone.

January 2022 is a recent high-water mark for stolen cars in Bellingham. Police report 74 auto thefts that month on a crime statistics webpage, the most in any month in at least the past four years.

Stolen vehicles have been a growing problem over the past year across Whatcom and Skagit counties, too. Most of the U.S. has seen a spike in vehicle thefts since the pandemic started.

For now, police say they can’t do much about the rising crime wave. Murphy said they're not even sure why it's happening.

The reasons for the sudden rise in auto thefts may be unclear, but Murphy mentioned some contributing factors. High on her list was a state law established last year that limits law enforcement’s ability to pursue suspects in vehicles.

“The criminals know at this point in time that we can’t necessarily chase them,” Murphy said. “If they run from us in a stolen vehicle, that isn’t a pursuable offense.”

Bellingham’s stolen-vehicle numbers were already going up in 2020. Total cases more than doubled during that first year of COVID-19 lockdowns compared to 2019.

In the first months of the pandemic, police officials told the Associated Press vehicle thefts provided a low-risk, high-reward opportunity for criminals because people were using their cars less and leaving them unattended more. Desperation brought on by high unemployment at the time also motivated the 2020 spike in auto thefts, according to the AP.

As Murphy said, “Some folks are in dire straits and need to steal to make money.” But the one thing that might define Bellingham’s car thieves the most is the crime itself.

“Many people who are stealing cars are lifelong criminals,” Murphy said. “All they’ve done is stealing cars.”

How to be a car thief

Thieves have about as many ways to steal cars as there are types of cars on the market. Ford trucks, like the one in the downtown Bellingham security footage, are notoriously easy to steal, law enforcement officials say.

On Feb. 3, a Sedro-Woolley officer knocked on the window of a Ford truck parked at an auto parts store with the engine running and the driver’s side lock punched out. The occupant was so startled, he tried to back out of his parking spot without realizing the officer had parked his black-and-white SUV directly behind him. The driver damaged the police cruiser, two other parked vehicles, and the side of the store building in a mad dash to escape, according to a Sedro-Woolley police report.

Criminals also target 1990s Hondas and Toyotas because they’re easy to take. “Anything that no longer has a (radio transponder) chip is easier to steal and break into,” Murphy said, although thieves also know how to bypass the chip keys.

In short, the ability to steal a car is limited only by how much patience and mechanical creativity a person has.

“If our car thieves used their ingenuity, their determination and their perseverance for positive, there would be such a positive effect on the community,” Murphy said.

Police and the prosecutor both said many of the usual deterrents for preventing auto thefts have broken down. For one, strict limits on the jail population imposed during the COVID-19 pandemic meant that some suspects arrested for property crimes weren't held. Sheriff Bill Elfo confirmed this in a presentation he gave on Jan. 20 to the county Justice Project’s Stakeholder Advisory Committee.

Booking restrictions may have been relaxed since then. In an email to Cascadia Daily News on March 18, the Sheriff’s Office provided a list of offenses that will keep a suspect held in jail until their bail hearing, including several property crimes. Burglary and possession of stolen property were on the list, as were motor vehicle theft and possession.

Setting aside jail restrictions, the entire justice system in the county has barely been functioning the past two years. COVID-19 lockdowns closed Whatcom County Superior Court for most of that period.

“People have not been held accountable in the ways they did prior to COVID, and a lot of that has to do with booking restrictions and the inability to have trials,” Richey said.

The court has started to work its way through a backlog of cases since reopening on Feb. 14, but auto thefts aren’t a top priority, Richey said.

“Our attorneys are overloaded with work, and we are focusing on the more serious crimes,” Richey said — particularly sex crimes.

“We want to get through a bunch of those cases,” he said on March 16. That’s been our focus the past month.”

On its end, the Bellingham Police Department is hampered in its investigations because it eliminated all special units due to a staffing shortage. Car theft cases might have been handled — or prevented altogether — by the department's now-defunct special investigations and anti-crime units. Murphy said Bellingham’s detectives do what they can to process a recovered vehicle for fingerprints or other DNA evidence.

Most stolen cars are recovered. Over a 90-day period ending March 14, only 37 out of 185 stolen vehicles hadn’t been found, Murphy said.

Bellingham police are taking one step at least to deter the crime, Murphy said: The department is now actively publicizing the surge in auto thefts, hoping to convince residents to take steps to reduce their own risk.