Post Point Lagoon, near Fairhaven, was severely polluted prior to restoration efforts in the early 2000s. The latest data available from the City of Bellingham, though, is from over a decade ago. (Hailey Hoffman/Cascadia Daily News)
By JULIA LERNER
Staff Reporter

When the Cuyahoga River in Cleveland, Ohio caught fire in 1969, lawmakers knew something had to change: Water quality standards needed to be raised; pollution levels needed to shrink dramatically; and contaminating industries like oil and manufacturing companies needed to be regulated.

In 1972, the federal Clean Water Act was signed into law. Designed to address water quality and pollution levels, the act seemed like a Hail Mary for human health and marine life. The end goal: to make all bodies of water in the United States “fishable and swimmable” by 1982.

We didn’t succeed. We didn’t even come close.

According to a recent study from the Environmental Integrity Project (EIP), about half of the bodies of water that have been studied across the country in recent years are too polluted for swimming and recreation, aquatic life, fishing or for use as a source for drinking water.

The report, released Thursday, studied how the Clean Water Act of 1972 impacted water quality across the country.

“On the 50th anniversary of the Clean Water Act, we wanted to see how far our nation had come toward achieving the law’s goal of 'fishable swimmable' waters for all waterways,” said the EIP's Tom Pelton. “Decades after the law’s target for 'all' waterways to be cleaned up, we found that half of all river and stream miles that have been studied nationally are so polluted they are considered impaired.”

Pelton said water quality across the country improved “substantially” in the two decades after the act was passed, but since then, progress has slowed to a halt because of a “big loophole for runoff pollution from agricultural lands.”

“Decades after the law’s target for 'all' waterways to be cleaned up, we found that half of all river and stream miles that have been studied nationally are so polluted they are considered impaired.” — Tom Pelton, Environmental Integrity Project

Washington, the third-largest agricultural exporter in the nation, had more than 14 million acres of farm and agricultural lands in 2021.

“In some regions, climate change is bringing increased rainfall, which means more runoff pollution being flushed off of farm fields and suburban parking lots into rivers and streams,” Pelton said. “This is a major problem.”

Part of the battle, according to the report, is getting accurate and up-to-date data for local bodies of water.

“The true extent of the nation’s water pollution is unknown because few states monitor all their waterways,” according to the report. “Congress and the states need to boost funding for the EPA (Environmental Protection Agency) and state environmental agency staff required to measure water quality.”

Only 27% of river and stream miles in the country have been studied in the last 6 to 10 years. States like Arizona, Missouri and Nevada have assessed less than 5% of their region’s bodies of water.

Washington has only reported assessments of about 13% of the rivers in the state in the last decade. 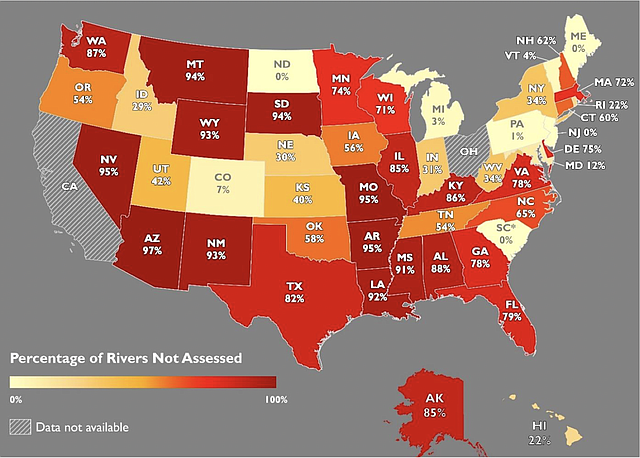 Percentages are of river and stream miles not assessed as required during the most recent cycle of 6 to 10 years, depending on the state. (Courtesy of the Environmental Integrity Project)

Of the state’s 74,000 miles of rivers and streams, only 9,327 were formally studied. Of those studied, 6,366 miles were considered “impaired,” or too polluted to meet universal safety standards.

Sixty-two percent of the water surveyed in the state was deemed unsafe for aquatic and marine life, a significant concern for Northwest Washington, where salmon and shellfish populations are struggling.

And 81% of the water surveyed showed signs of pollution dangerous for fish consumption. Locals have felt these effects firsthand, with near-constant beach harvesting closures in Whatcom County.

Shellfish, a historic food source for local Indigenous populations like the Lummi Nation, feed by filtering particles from water. When the water is polluted, shellfish become unsafe for human consumption, and over the last decade, shellfish harvests have become increasingly rare in the Lummi Nation.

“These numbers, while staggering on their own, understate the scale of the remaining problems,” according to the report. “The big picture is that while the federal Clean Water Act should be given credit for substantial improvements to the nation’s waterways, as the landmark law approaches its 50th birthday, the Act has not achieved what it promised.”

Limited funding for environmental programs means local and state agencies often do not have the money or the staff to test and study bodies of water within mandated time periods, the report says.

Reporting and analysis issues persist at the local level, too. In Whatcom County, several bodies of water, including Drayton Harbor, Post Point Lagoon and Lake Whatcom, are working with analyses from more than a decade ago.

“More frequent water quality monitoring is important because the conditions of many waterways change over time, in part because of increased rainfall from climate change, and in part because of real estate development and changes in the amount of blacktop and other impervious surfaces,” Pelton said. “Also, in some regions, the growth of industrial animal production is booming, and so it’s important to keep on top of what kind of impact this is having on local waterways.”

The EIP is calling on states to do more for water analysis as the climate changes.