The plot thickens at the Chuckanut Center 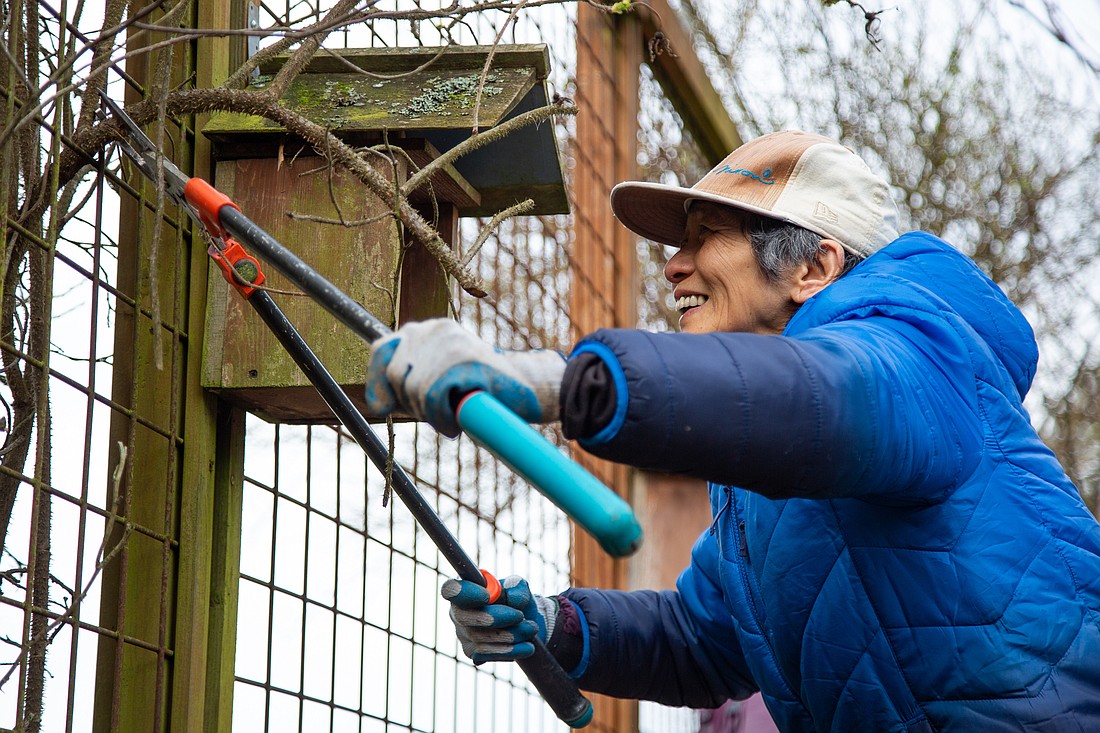 Volunteer Chiao Cheng shears a thick branch that had grown through a fence at the Chuckanut Center on March 12. Cheng and about a dozen other volunteers attended the center's Weed and Feed event. (Hailey Hoffman/Cascadia Daily News)
By AMY KEPFERLE
Staff Reporter

At a “Weed and Feed” event at the Chuckanut Center last Saturday, John Egbert tugged a dense clump of wild fennel root he'd just excavated from the fence line of the center's sprawling garden space next to Fairhaven Park on Chuckanut Drive and asked if I wanted to take the plant home with me.

After I declined, pointing out I already had plenty of the fast-growing roadside pollinator encroaching on my own fence line, Egbert took a break from digging to share how he'd first found out about the volunteer-driven nonprofit that formed in 2009 with a mission to grow food, skills and a resilient community.

Egbert said after he retired to Bellingham from New Mexico five years ago to be near his grandchildren, he was exploring the myriad trails near his home in Fairhaven and happened upon the Chuckanut Center during a walk. After striking up a conversation with founding board member Shannon Maris — who was pruning fruit trees in the small orchard of the 1.8-acre property the center leases from the City of Bellingham — he realized the ethos of the center paired well with his skill set. 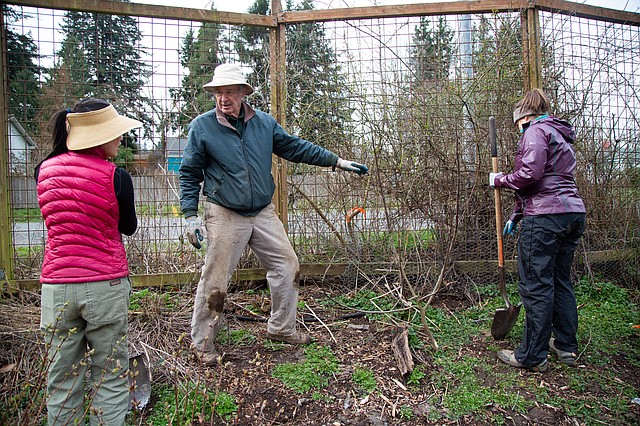 John Egbert works with other volunteers to clear the fence of weeds and other overgrown plants. (Hailey Hoffman/Cascadia Daily News)

Before long, Maris had convinced him to start a victory garden that these days donates food to the Bellingham Food Bank, Homes Now and the Lighthouse Mission.

In Albuquerque, Egbert had run school gardens and taught kids how to grow their own food. At the Chuckanut Center, he volunteers during the monthly Weed and Feed gatherings, teaches various classes on gardening to adults and youth, tends the plot he rents from the center for $40 a year, and still manages to take care of his own backyard garden. But where does he find the energy to keep it up?

“I have a very high metabolism,” he said, laughing. “And when you're working as a group, it's a lot easier.”

Board president and homesteader Erin McCain-Anderson said Egbert's story is a familiar one. Pointing to a group of volunteers who were pulling weeds and attaching chicken wire along the bottom of the fence in an effort to keep rabbits out of the main plot, she observed many of them were returning gardeners, but said first-timers had also showed up.

Some come to the center to learn new skills, she said, and others show up to share their own via classes and workshops on everything from beekeeping to plant identification, cooperative vegetable and flower gardening, knife and tool sharpening, spoon-carving, sewing and meditation.

With pandemic restrictions easing, some of the classes this spring and summer are set to resume indoors in the renovated structure that began its life in 1914 as the caretakers' house for the Fairhaven Park Rose Garden before becoming a youth hostel for a short time in the 1990s. 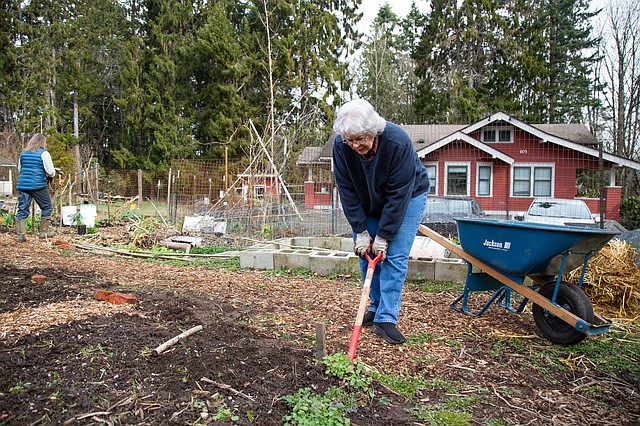 Sue Knapp removes weeds and debris from her garden plot at the Chuckanut Center. Knapp lives in Fairhaven and enjoys living within walking distance of the garden. (Hailey Hoffman/Cascadia Daily News)

The Weed and Feed events, McCain-Anderson said, are a good way to help people find out more about the center's rich history and its visions for the future. Volunteers meet other gardeners, learn plant maintenance strategies, and contribute their efforts to the large victory garden that donates fresh produce to those in need.

At the end of the day, they sit down to a delicious meal prepared by the board. Saturday's meal plan included a spinach nettle pie with nettles sourced from the property, as well as apple juice from the center's fall fruit haul that had been thawed for the occasion.

“You build community through food, and that's one of the things we do here at the center — try to incorporate food into our classes, and into our instruction, and into our events and volunteer opportunities,” McCain-Anderson said. 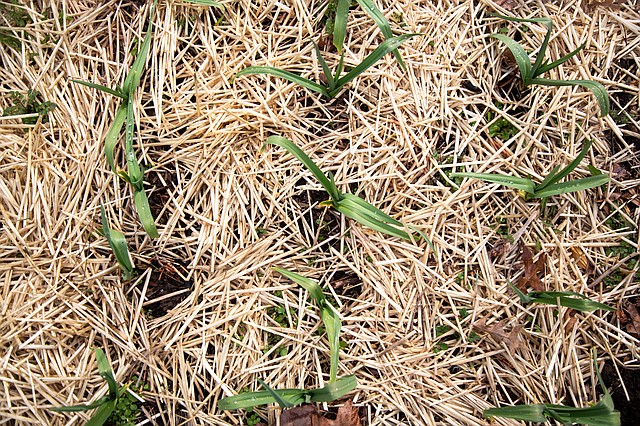 Garlic shoots poke through a blanket of hay. Planted last fall, the garlic will be ready to harvest in late June or early July. (Hailey Hoffman/Cascadia Daily News)

Using permaculture principles that focus on implementing a system that will feed itself and complement other plants, she said the list of what they grow in the space is a long one.

In addition to a plethora of produce grown for both personal consumption and donation purposes, the lineup includes perennials situated along the fence lines, medicinal plants, nitrogen-fixing plants such as elderberries and roses, blueberries, raspberries, apples, pears and plums.

At Weed and Feed gatherings, Thursday afternoon “plant posses” that begin in April, and the skill-sharing classes that are ramping up during the growing season, community members are encouraged to make the Chuckanut Center a place they come not only to learn, but to share. Along the way, they're likely to make new friends.

Shannon Maris, the founding board member who has been part of the Chuckanut Center since its inception in 2009 — when the house was boarded up, the porch was falling in and the former rose garden was just a swath of grass — has seen the way the center has brought people together.

It wasn't until she'd been on the board for a while that Maris realized she had a more personal connection to the space. Shortly after the board poured cement for the wheelchair ramp leading into the house, a relative told her the rose garden had been a place her late grandmother visited from her home in Anacortes. Maris grew up in California, so she hadn't been aware of the connection until then.

“What are the chances of me helping rehab the same place that my grandmother used to go for peace and serenity, for healing?” Maris said. “It gave me goosebumps.” 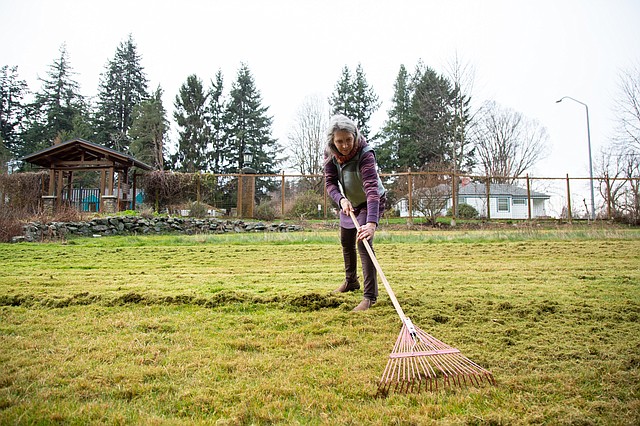 Nancy Pearson rakes freshly mowed grass clippings on the center's lawn. The green clippings will be added to piles of straw to help speed up the composting process. (Hailey Hoffman/Cascadia Daily News)

These days, Maris is no longer a board member, but she still volunteers at the space she helped create for the community. Looking across the garden plots, hoop house, compost piles, orchard and house, she knows what it took to transform it.

“This was all open lawn,” she said. “All park. And this is what we've turned it into after hundreds of thousands of hours of work and vision. It's a beautiful thing.”

The Chuckanut Center is located at 103 Chuckanut Drive N. To find out more about volunteer opportunities, classes, donating to the nonprofit or signing up for a garden plot, go to chuckanutcenter.org