Let's talk about those gold trophies that came back to Lynden 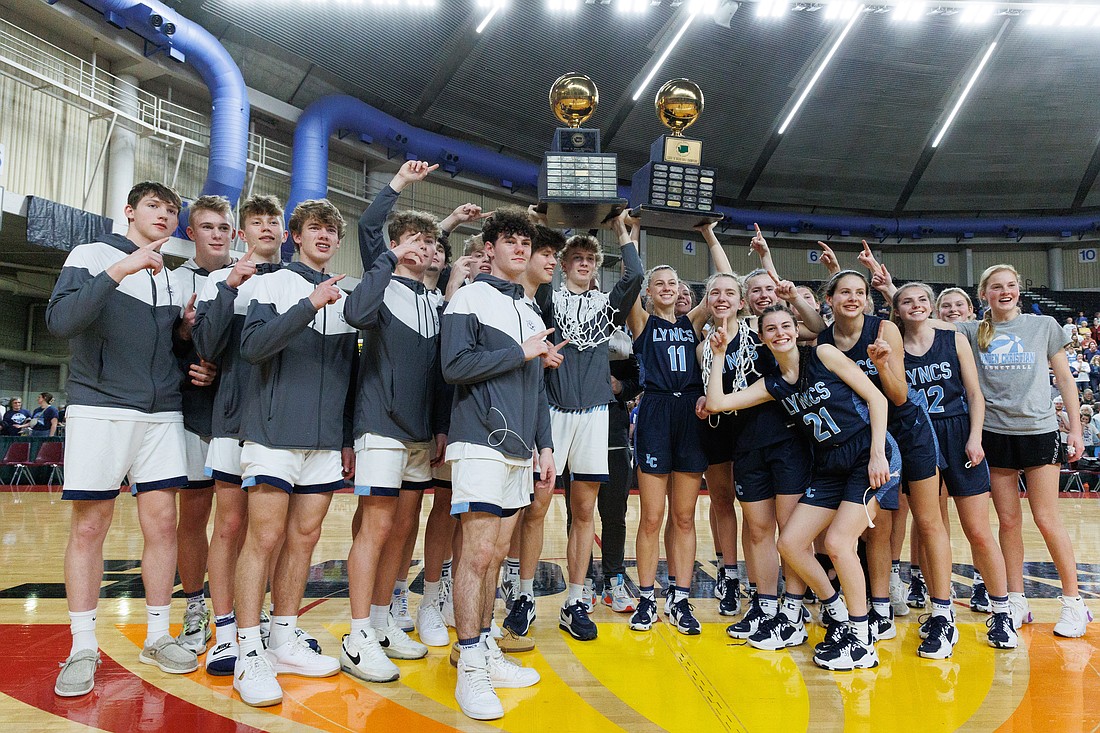 The Lynden Christian boys and girls teams celebrate as both won their respective 1A state championship titles at the Yakima Valley SunDome on March 5. (Andy Bronson/Cascadia Daily News)

I think it's time we discuss what's in the water in Lynden. Or is it the milk? I know those kids frequent Edaleen Dairy.

In case you live under a rock or are one of those people who believes not liking sports is a personality trait, three basketball state titles came back to Whatcom County this past weekend.

All from the city of Lynden.

The Lynden boys and Lynden Christian boys and girls teams all claimed high school basketball royalty, winning 2A and 1A state championships, respectively.

Winning the state title is a big deal, but this is hardly the first time that little town up north has been able to celebrate its basketball teams.

Between both schools, the boys and girls teams have won a remarkable 35 state championships. The first came courtesy of the Lynden boys in 1961. The Lynden Christian girls have claimed a ridiculous 14 championships as a program, the most in the state across all classifications for both boys and girls basketball.

How do they do it?

I think every kid up there is born with a basketball in their hands. That's the only thing I can think of.

Don't get me started on Lynden Christian being a private school and recruiting and blah, blah, blah. Nobody is secretly funneling money for kids to play basketball up there. Save that energy for the private schools near Seattle; all the kids in the Lyncs uniform are from Whatcom County.

Even getting kids from outside the city is a conversation for another day reserved for the grown men whining about private schools on Twitter. Let's not take away from the achievements of teenagers. They're kids after all.

These teams are good year after year. They don't rebuild, they reload.

And for the most part, there's no coaching carousel. Some of them have been coaching longer than I've been alive. I think. That might be an exaggeration, but you get what I mean.

Anyway, 35 total basketball titles between the two schools and a combined 14 state championships since 2012. That's insane.

That kind of consistency at such a high level comes from many places. Great coaching is a start. Talent is another.

Take any of the rosters from either school and there's a good chance you can look up a name and find out one, if not both, of their parents also played at Lynden or Lynden Christian. There's also a good chance their parents won a state championship or two.

Looking at this past week, I'm not sure if there's any other town in the state that has won three state titles in one day. If there is, let me know, because my brief Google search Monday morning got me nowhere.

The closest thing I can think of was my senior year of high school when our boys golf, baseball and softball teams all won state titles. I don't remember if that was all on the same day though, 2014 was a long time ago. (I also was on none of those teams, but that's neither here nor there.)

Besides, that's three different sports compared to just this one.

Lynden is basketball. Basketball is Lynden.

Maybe we should start looking into the milk.