New rules would protect against redevelopment, but not rising rents 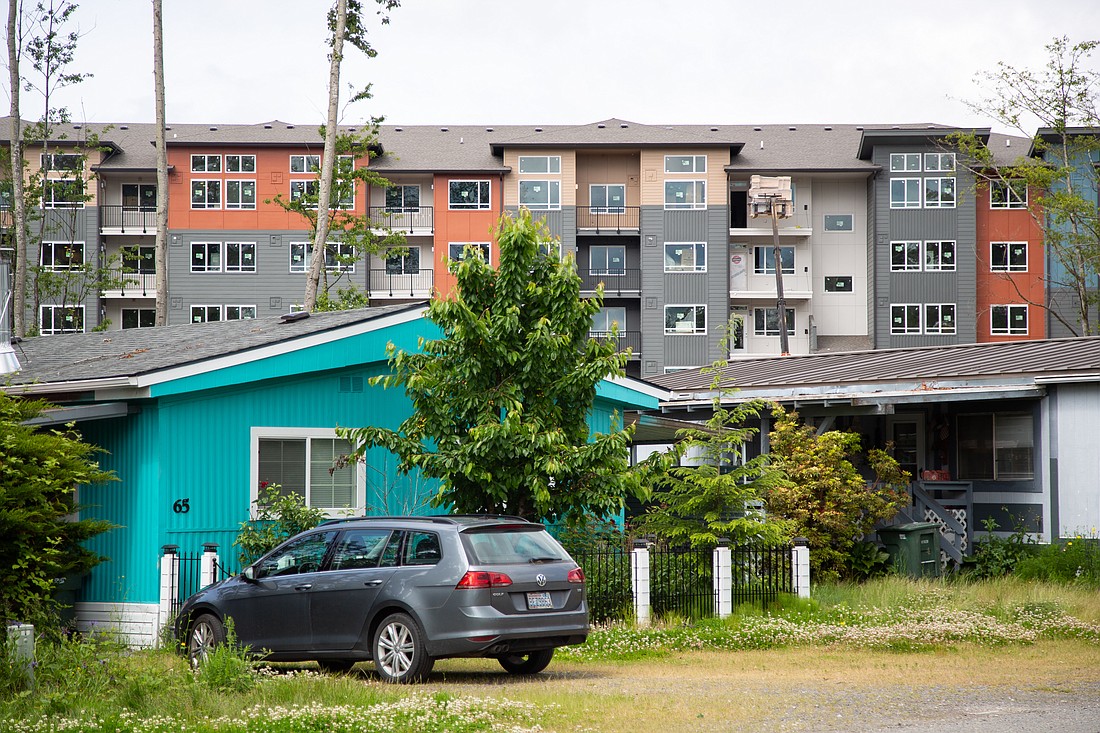 Bellingham officials are devising new rules that would protect manufactured home parks from redevelopment and preserve an affordable-housing option in a city where those are becoming increasingly scarce.

This intent, however, doesn’t align with the reality some mobile-home owners face today. They fear they may be priced out of properties due to market forces outside the city’s control.

Jean Ryan is a resident of Bakerview Estates LLC, a 23-acre, 126-home park located near the Bellis Fair mall. When a new company, Hurst & Son LLC, took over the park in December 2019, Ryan received notice that her rent was increasing from $490 to $770, a 57% increase.

She was also asked to sign a nine-month lease, which is illegal in the state of Washington for mobile home parks per RCW 59.20. Levi Black, field manager for Hurst & Son LLC, said in an email, “All leases are a minimum of 12-months and written communications with tenants is always preferred.”

A former landlord from New York, Ryan said she knew what she was being asked to sign was illegal, but fears others in her predicament do not.

“For anybody that doesn’t have my background, this looks really official,” Ryan said, motioning to the lease document she received from Hurst & Son LLC. 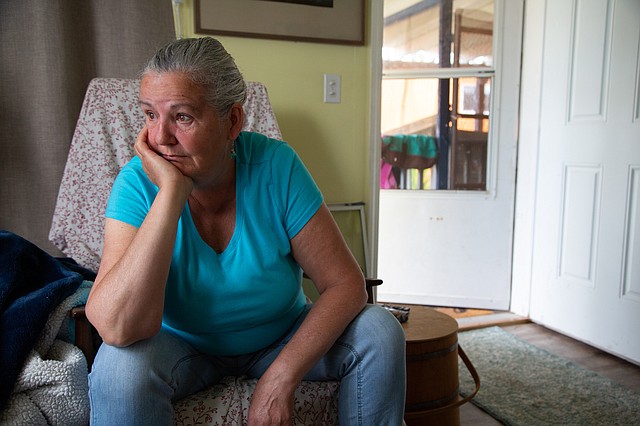 Jean Ryan sits in the living room of her mobile home in the Bakerview Estates LLC on June 17. Ryan has filed a complaint with the Washington State Attorney General about the park. (Hailey Hoffman/Cascadia Daily News)

The park is home to multi-generational immigrant families, many of whom may not know their rights as tenants. Ryan has not agreed to pay the increased rent nor sign the new lease. Instead, she filed a complaint with the Washington State Attorney General, but even if her case is rectified, she doubts the resolution will translate to the rest of the park.

“I’m no longer panic-stricken like I was when I first got the notice,” Ryan said, “and since I’ve gotten the AG involved, I’m not as concerned. I think what will happen, at best, is they’ll reconcile it for me and [not] everybody else.”

Ryan fears the new ownership is gearing up to sell the park, a move Hurst & Son LLC denies. Black said the company is aware of the city's intent to develop the areas around the community, and that the areas surrounding the community will continue to be zoned for multifamily and single-family residential uses.

“While Hurst & Son does not have any plans for further development or a change in land use for the community, we do believe that the area and city would benefit from additional housing options,” Black said in an email.

The new rules, presented to the Bellingham Planning Commission during a public hearing June 16, would essentially ban all other types of development at the city’s existing manufactured home parks. As they stand now, the draft rules would permit only churches, schools and cell towers, in addition to manufactured homes and the parks’ common areas.

Residents approached city officials a few years ago to say they feared their mobile home parks were about to close. Nationwide, it has become a trend for investors to buy a mobile home park and redevelop the, often, prime real estate.

“It’s well-founded concern,” city planner Greg Aucutt told the Planning Commission. “Manufactured home parks have been closing in a lot of communities, especially those communities where land values have gone up tremendously and where housing is very expensive.”

In response to these concerns, the City Council in 2019 placed a moratorium on redevelopment applications at the city’s 10 mobile home parks, to give staff time to find ways to keep the parks intact.

Bellingham’s 10 manufactured home parks are home to some 1,448 residents in 884 units, according to city figures. 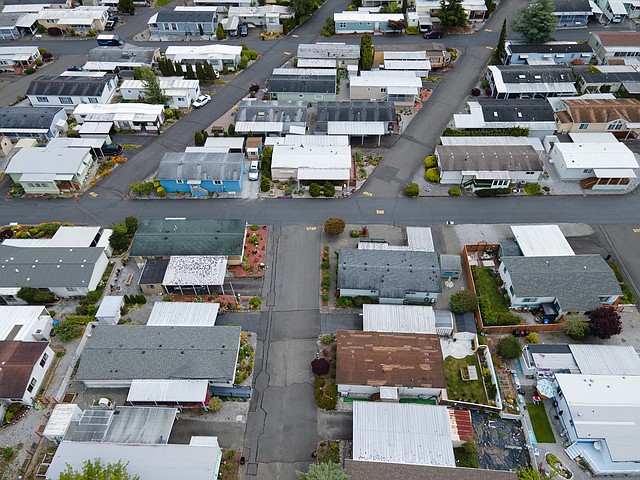 The proposed rule change offers a two-pronged approach. In addition to the strict limits on allowed uses, the rules also would require park owners to give residents the opportunity to purchase the property if they ever decided to sell.

Ryan said she wished she had known the park was for sale in 2019.

“I’m enough of a rabble-rouser that I would have tried to get everybody in the park to understand that if we bought the park, we could stabilize rents,” Ryan said.

While most of the attendees at the public hearing were in favor of the proposed rule changes, Michael Reams, owner of the Samish Mobile Home Park at 119 N. Samish Way, said at the public hearing his park — sometimes called Samish Court — should be exempt from the redevelopment ban. As Reams reminded city officials, that entire stretch of Samish Way was slated for redevelopment when the city designated it as a high-density urban village.

City officials have been in contact with most of the manufactured home park owners to discuss the rule changes.

“Really, the only concern that we’ve heard is from Samish Court, and that’s a unique circumstance, obviously, being in an urban village,” Aucutt said. “It was purchased by the current owners with the  intent of redeveloping, as far as I understand.” 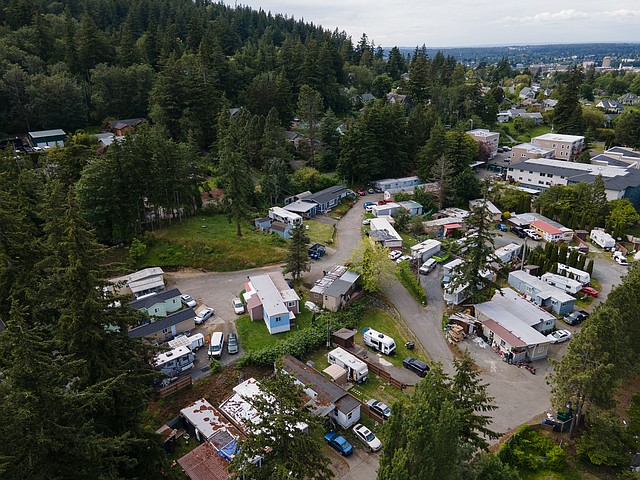 Samish Court park is located just off of Samish Way and is designated as a high-density urban village. Owner Michael Reams has asked to be exempt from the redevelopment ban. (Hailey Hoffman/Cascadia Daily News)

“We’re not really talking about what that means for the folks that live there,” McAuley said. “Most of these things cannot be moved. If they can be moved, the cost of moving exceeds the value of what they are, and that person still needs to find a place to put it.”

“In that case,” McAuley added, “the owner of that mobile home or manufactured home is just out. Their house will be abandoned and destroyed, and they’ll receive no compensation for it.”

Ryan fears the same end for many of her neighbors. Even if the city were to protect against redevelopment, increasing rents could end up forcing residents out of their mobile homes in a state that prohibits rent control.

“My trailer likely could move — not the porch, but the trailer,” Ryan said. “I’d say easily half of this park is too old to move. [A trailer] has to be under 15 years old or it can’t move. They’d lose their homes. They’d lose all equity.” 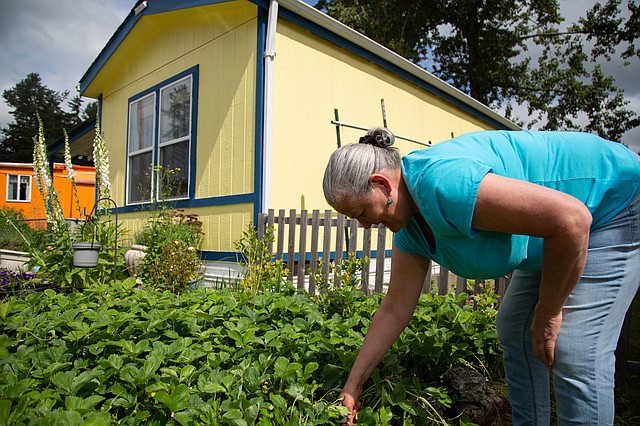 Jean Ryan plucks weeds out of the strawberry bed outside her trailer. (Hailey Hoffman/Cascadia Daily News)

The new rules could still include certain protections for all mobile-home residents, including compensation after losing their home or a guaranteed spot in a low-income residence on the redeveloped property, city officials said.

The city cannot legislate affordability at manufactured home parks, however. Market pressures are already forcing rents to go up at these properties.

An opportunity to preserve affordability could arise, Aucutt said, whenever a mobile-home park owner decides to sell. The city could alert housing nonprofits such as the Opportunity Council and Kulshan Community Land Trust to the sale, giving these organizations a chance to decide whether to acquire the land and keep the rents affordable.

The Planning Commission is expected to make a recommendation to the City Council on the manufactured home park rules at its next meeting on July 7. The council will then hold another public hearing on the rules over the following weeks, before deciding whether to adopt them.