East Whatcom navigates food insecurity: ‘We can’t do everything’ 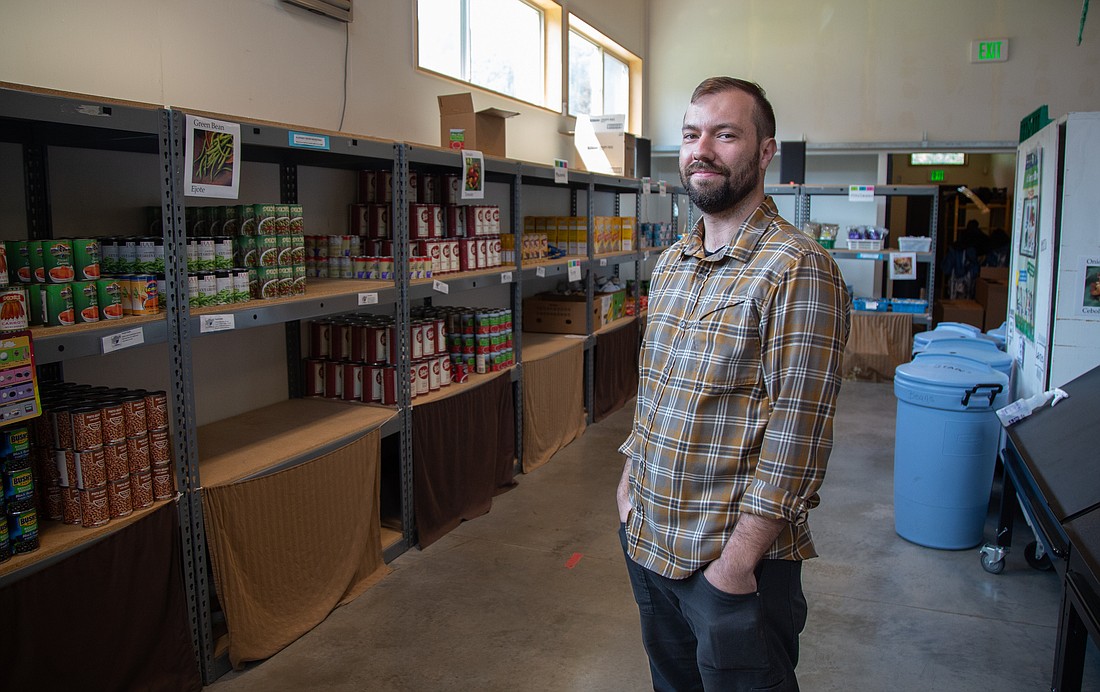 Sam Norris is the executive director of Foothills Food Bank. Norris, the food bank's only employee, has directly seen the impacts of rising inflation and food costs on the products he can offer and on the families who need it. (Hailey Hoffman/Cascadia Daily News)
By CHARLOTTE ALDEN
Staff Reporter

Executive Director Sam Norris wants to expand the Foothills Food Bank’s hours. He wants to purchase healthier food and let people take as many items as they want off the pantry shelves.

But he can't. Norris doesn’t have the funding nor the manpower to expand the food bank’s reach in its 600-square-mile service area.

“We’re just not as accessible as we need to be for as many people as could use our food bank,” Norris said. “I'm at a point where I don't really feel like we can expand too much [more].”

Norris is the sole paid staff member at a food bank signing on a dozen new households a week in a time of high inflation, rising food costs and expensive gasoline.

Financial pressures are seemingly coming from all sides, and struggles with food access are only worsening. With only one paid staffer at the food bank, and community leaders and volunteers filling in the rest of the work, the system is unsustainable without more funding. 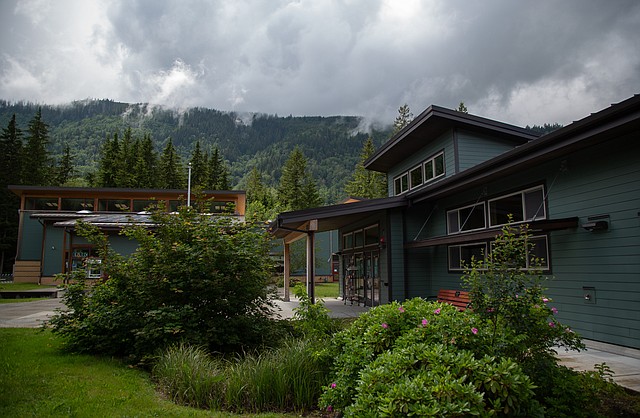 East Whatcom County is home to about 9,000 people, and food access intersects with a plethora of other issues the community faces due to its rural nature.

The area is a USDA-recognized rural food desert — meaning at least 33% of the census tract population resides more than 10 miles from a large grocery store, and at least 20% of the population is at or below the federal poverty level.

The Whatcom County Health Department’s 2019 food assessment in East County found that residents struggle with access to healthy and affordable food, and the region has higher proportions of people vulnerable to food security.

The food that is available in East County is generally more expensive than in Bellingham. There are no big-box grocery stores, meaning the smaller, independent stores pay more for goods in general, and pay extra to transport them.

Cheryl Thompson, store manager of Crossroads Grocery, one of the few grocery stores in East County, said recent price increases in food have made her “afraid.”

Cheryl Thompson manages Crossroads Grocery in Maple Falls. The local grocery store — one of the only in the area — is grappling with rising prices of food in an already vulnerable region. (Hailey Hoffman/Cascadia Daily News)

Transportation not only impacts those running food establishments — it also impacts the ability of people to access goods in general. A bus line runs from Bellingham to East County, but it’s a long trip for people shopping for groceries.

Many people in the county don’t have cars, said Ali Jensen, program specialist at the Whatcom County Health Department, and those who do are grappling with gas costs. There’s a bus to the food bank, but no bus to the biggest grocery store in the area.

More and more locals are accessing the food bank, mounting pressures there as well.

“You not only have people who were already visiting the food bank, and now the food bank is paying twice as much to buy food for those folks, you also have this new set of the population who … are seeking supplemental food via food banks or other options,” Jensen said. “That’s put a huge burden on both individuals, the food bank and the food system as a whole.” 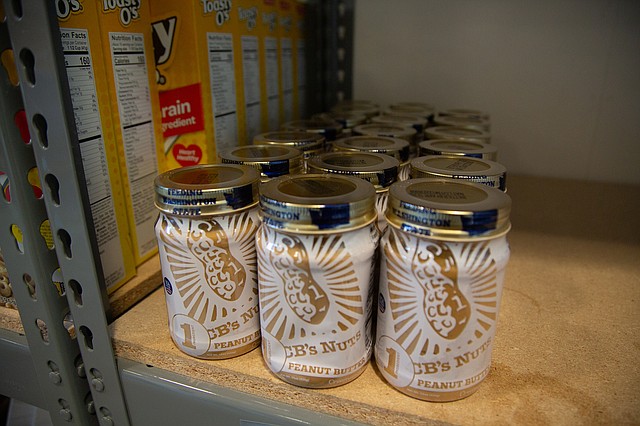 The last jars of peanut butter at the food bank sit on shelves, ready to be taken. Between a recall on Jif Peanut Butter and rising food costs, the food bank is struggling to keep up supply of the pantry staple. (Hailey Hoffman/Cascadia Daily News)

East Whatcom is further disadvantaged by the lack of incorporated cities to advocate on these issues to the county and other representatives.

Sharon Shewmake, 42nd District representative and a candidate for the state Senate, said this is one of the reasons she pays attention to the issues in East Whatcom.

“When you have an incorporated city, they have a lobbyist that comes and tells you what the issues are,” Shewmake said. “When you don’t have a person living there who’s an elected, it’s hard to know who’s the voice in the community or just extremely vocal.” 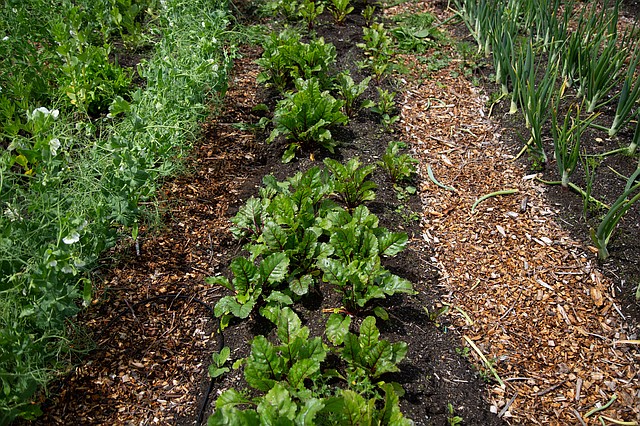 Vegetables grow in the garden managed by Flynn Farms outside of the Foothills Food Bank. (Hailey Hoffman/Cascadia Daily News)

Work to address food security is ongoing, and despite the new inflationary pressures, the situation is better than it once was.

A new building to house the Foothills Food Bank opened in 2020 at the East Whatcom Regional Resource Center, a step forward in terms of capacity-building, sources said.

The Foothills Community Food Partnership’s 2021 Food Access Plan outlines goals for further capacity-building, education, development and community solutions to the food access problems. East County also has several food-security programs, including a program for seniors to craft and cook together and a meal program which feeds local students in the winter and spring when they’re on break from school. Seniors in the area also have access to the USDA-funded Senior Farmers Market Nutrition Program. 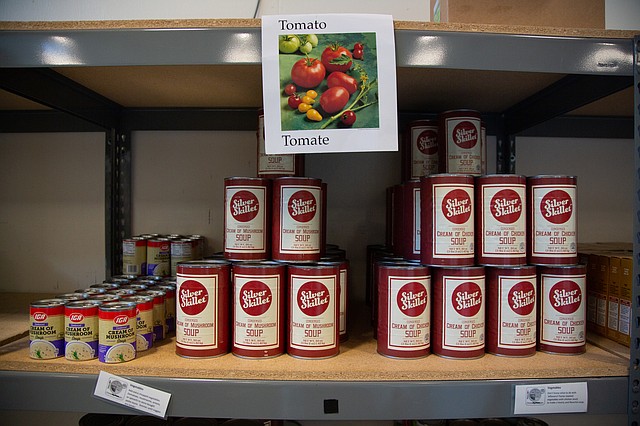 Cans of soup and other non-perishable items fill the shelves of the food bank. (Hailey Hoffman/Cascadia Daily News)

Jensen said she’s been impressed by how much progress has been made on these goals within the community.

“I want to reiterate how important and inspiring it is that food insecurity can be addressed at a community level,” Jensen said. “People don't have to wait around for people to come and save them.”

While a focus on community is essential when it comes to tackling the issue, some said the community can’t be left to solve the problem on its own.

“There's only a handful, maybe one or two handfuls of people that are willing and able to volunteer on a regular basis,” said Carl McDaniel, a parks commissioner in East County and part of the Foothills Community Alliance. “That's just reality. All of them are amazing. But it is going to require funds. We can't do everything.”

“Having it be volunteer-run and community-run is challenging, because if there's a community leader who gets sick or can no longer serve in their role, it may make the whole system fail,” Robinson said.

Funding for various initiatives has generally been pieced together through grants and partnerships with other organizations.

The Food Bank Task Force — a coalition of food bank leaders throughout the county — was able to secure $600,000 in CARES funding to allow food banks, including Foothills, to invest in some infrastructure.

Mauri Ingram of the Whatcom Community Foundation said the task force is asking the county to allocate $500,000 in American Rescue Plan Act (ARPA) dollars to food purchasing to food banks county-wide. County Council discussed the matter briefly at its Finance Committee meeting on June 21, with most council members in attendance expressing support.

The committee asked for more details on the status of the county’s ARPA dollars and how this money, if allocated, would be distributed. 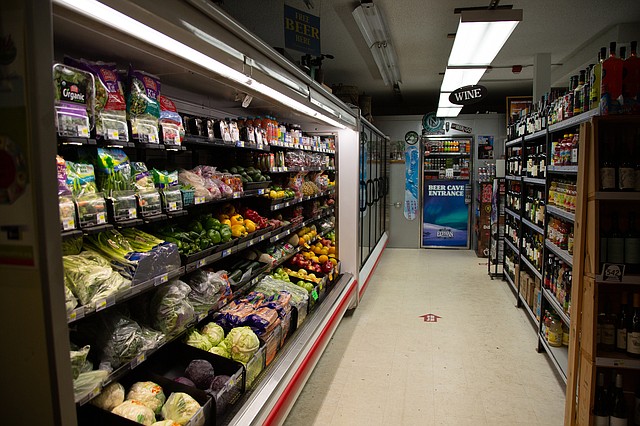 Despite its small size, Crossroads Grocery provides a wide range of produce – local and imported – and other pantry staples. (Hailey Hoffman/Cascadia Daily News)

County Council member Kaylee Galloway said in an interview that ARPA dollars for purchasing would be a short-term solution, but discussions must continue. She said the county could play a bigger role in funding the food bank to allow for more paid staff and addressing larger issues of food access throughout the county.

“ARPA dollars will eventually go away and ... we will have to find additional, sustainable ways to make those investments,” Galloway said.

County Council member for the district Tyler Byrd did not respond to multiple requests for comment.

There’s no “silver bullet” to solve all the issues of food access in East Whatcom, said Rebecca Cayen of the East Whatcom Community Council. But more money for the food bank would be a start.

“We're heavily relied on. We are depended on by a lot of people,” Norris said. “I think it's interesting that we are kind of left to our own devices in order to staff this place, to get volunteers, to do the funding, to do the back-end logistical stuff.

“I think for a community that is as rural and disconnected as ours is, that depends on what little food resources are out here as heavily as they do, it really needs to be funded and supported by dedicated paid staff.”

A previous version of this story incorrectly stated that the Health Department created the Foothills Food Access Plan. The plan was actually a product of the Foothills Community Food Partnership. The story was updated to reflect this change on June 23, 2022 at 9:39 a.m. The Cascadia Daily News regrets the error.