A stitch in history 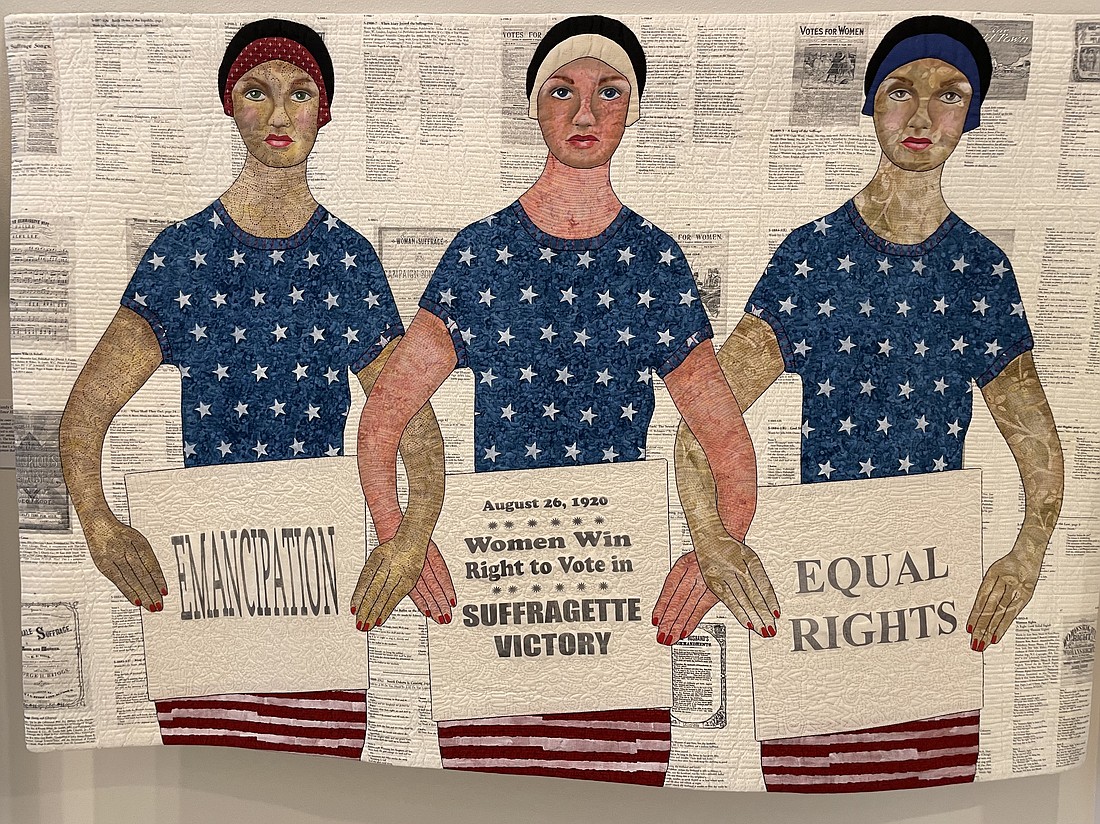 Pat Kumicich's “Standing Together" is part of the “Deeds Not Words: Celebrating 100 Years of Women's Suffrage” exhibit currently on display at the Pacific Northwest Quilt & Fiber Arts Museum in La Conner. (Photo by Stephen Hunter)

Forward-thinking Wyoming gave women the right to vote in 1869, but the women’s suffragist movement only achieved its goal of an amendment to the U.S. Constitution in 1920. This delay was not for lack of trying.

“Deeds Not Words” was the suffragists’ motto. Twenty-eight art quilts at the Pacific Northwest Quilt & Fiber Arts Museum in La Conner celebrate its leaders: “True revolutionaries … sacrificing their reputations and sometimes their freedom” for the cause of women’s votes.”

Sandra Sider, past curator of the Texas Quilt Museum, and Pamela Weeks of the New England Quilt Museum, curated the touring exhibit.

Ree Fagan’s quilt depicts 20 images of the “everyday” women who rallied to the cause. Jane Burch Cochran honors the pioneer suffragist Martha Wright, one of the sisters who organized the historic Seneca Falls Convention (1848). Wright overcame her fear of speaking in public to become known for her quick wit.

A poignant composition is Alice Beasley’s “She Refused to Walk Behind,” (2019) dominated by the pensive face of the courageous Ida B. Wells, a Black woman, who is meditating her bold step into the whites-only ranks of the 1913 Chicago suffrage parade.

“Let men be compelled to wear our dress for awhile and we should soon hear them advocating a change,” reads Robin Schwalb’s quilt, “Amelia Bloomer” (2019). From our distant perspective, we need to be reminded that throughout the 19th century, women’s activities were restricted by long dresses which dragged on the floor —  from which “bloomers” offered freedom.

A fascinating visual puzzle is the artful “Charlotte Woodward Pierce: Knight of Potholders in the Kitchen Tarot” (2019). This quilt honors the only woman who attended the 1848 Seneca Falls Convention and who was still alive when women won the right to vote in 1920. The author of this complicated quilt, Susan Shie, includes portraits, lists of prominent women in politics, quotations of historic speeches and names all 102 women elected to the House of Representatives in 1918. 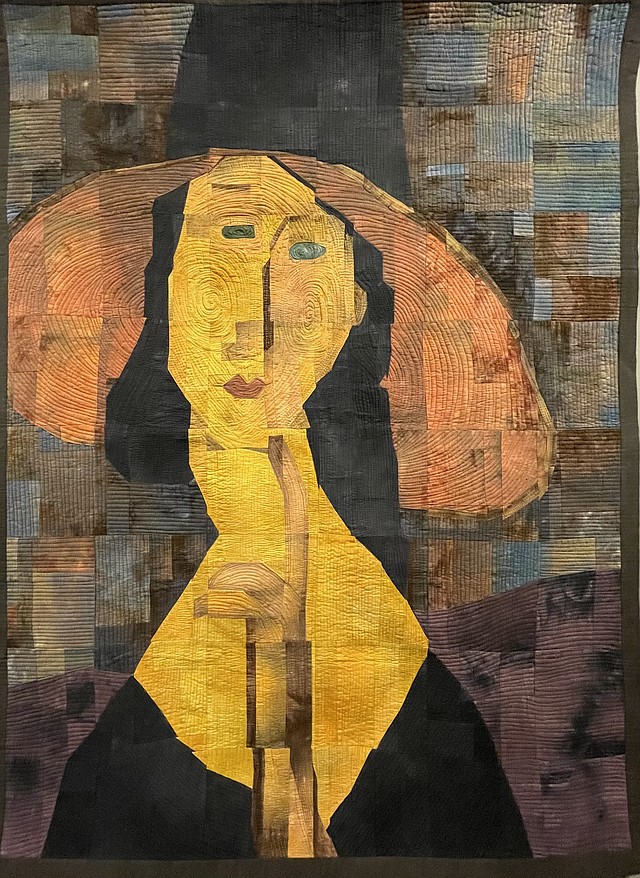 The impact of Western art in Korea is manifest in Kyungha Oh's rendition of Modigliani’s “Portrait of Jeanne,” showing as part of the “The Quilt Road: Contemporary Korean Quilts.” The machine-sewn quilt has all the haunting sadness of the original, plus colorful and textural fabric. (Photo by Stephen Hunter)

A second exhibit at the museum, “The Quilt Road: Contemporary Korean Quilts,” displays the sophisticated creations of graduates of Sookmyung Women’s University Museum. Jointly curated by Misik Kim in South Korea and Patti King in the United States, it offers surprising insights into Korean history and values.

Tigers feature in the foundation myths of Korean culture, so it’s not surprising to see quilted portraits of them. Hyeyoung Seo offers two, “Emotion” and “Psychedelic.” The quilter explains, “To you: I fell in love with your splendor, admired your dignity and intoxicated by your elegance. It has made indescribable changes to my mind.”

The impact of Western art in Korea is manifest in Kyungha Oh’s rendition of Modigliani’s “Portrait of Jeanne.” The machine-sewn quilt has all the haunting sadness of the original, plus colorful and textural fabric. It’s a winner!

The Korean flag is a serene composite of classic Taoist-Confucian images. Weaver Kyungil Kim has snipped it up and reassembled the pieces into a dynamic abstraction. In the U.S., a cut-up flag would be controversial, but the Korean artist sweetly avers that she “was reminded of the love” she bears for her country.

A patriotic use of the flag appears in the quilted portrait of Yu Gwan-sun, often called “Korea’s Joan of Arc.” This 18-year-old Christian activist stubbornly demonstrated against Japanese military rulers until they tortured her to death in 1920. “Sympathy” is the name of the memorial quilt by Changsook Kim.

On the subject of “love,” a large hand-dyed work by Eynmi Jang displays the Korean word in rough, uneven lines, the composition unbalanced and awkward. The artist comments, “Is there any other word more difficult to explain?”

Hyunjoo Cho began her quilt intending to depict the blue sky, but as she wove “following her heart,” this beautiful indigo-dyed cotton “Summer Waltz,” “became a cool wave of the sea.” Coolness is also the theme of Misik Kim’s powerful “The Winter Wind,” imagining a tornado of dead leaves swirling into the sky. The artist felt “very lucky to experience many things the earth shows us every season.”

The city is a harsh place where people struggle to make ends meet. Misik Kim thinks of it like an old black-and-white photograph and creates an abstraction out of scraps of grey, blue and black cloth — “The View of Downtown.” Her colleague, Jikyung Kim, pictures several dozen colorful windows in “Sight.” Changsook Kim finds beauty in the many bridges over the River Han and depicts 22 of them in one quilt; in another, she plays with the cityscape by adding Spider-Man.

This is only a hint of the colorful weavings to be seen at the stately old Gatches Mansion on the hill in La Conner. You may be inspired by Hyeyoung Seo’s peaceful work, “Draw One’s Mind,” a portrait of a Korean beauty who “puts her greed aside and sews with abundance, happiness and tranquility.”