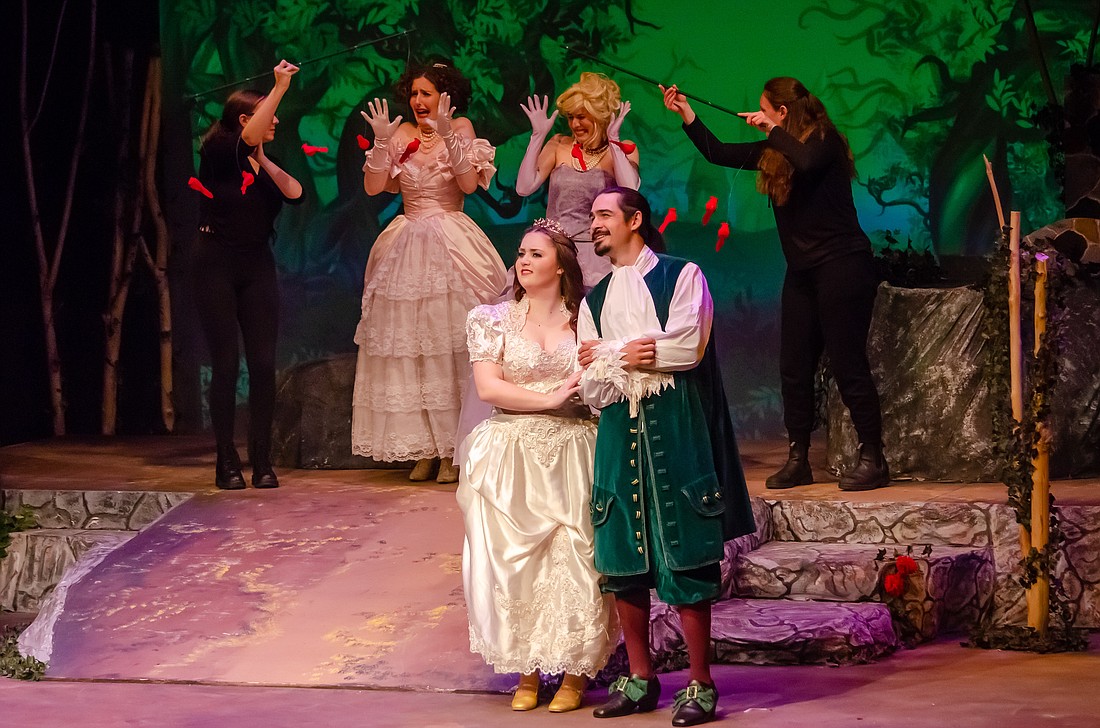 In “Into the Woods,” Cinderella (Megan Sutton) and her prince (Benjamin Usher) celebrate their nuptials while her evil stepsisters (Erin Melanie and Livia Cohen) get their eyes pecked out by avenging birds. The play shows through June 26 at the Bellingham Theatre Guild. (Photo courtesy of Alycia Francis)
By AMY KEPFERLE
Staff Reporter

Spoiler alert: In James Lapine and Stephen Sondheim's twisted fairy tale “Into the Woods,” not everybody makes it out alive.

I won't go so far as to out the characters who suddenly drop dead, tumble off cliffs or get squished by an angry giantess bent on revenge, but I will tell those unfamiliar with the plot that “happily ever after” isn't always all it's cracked up to be.

That's the bad news. The good news? Bellingham Theatre Guild's (BTG) rendition of the famous musical is well worth the price of admission. In fact, after attending the opening weekend matinee last Sunday, I was agog at the amount of talent assembled both onstage and off.

From the actors who believably portrayed characters from the annals of fairy tale history — including Cinderella and her bitchy stepsisters, Rapunzel, Little Red Riding Hood and the fearsome wolf, Jack (of beanstalk fame) and many more — to the stellar work of the costume designers, makeup crew, lighting technicians, set designers, stagehands and behind-the-scenes orchestra, the volunteer-driven production seemed to be a fitting end to BTG's first full season since the beginning of the pandemic.

Maybe it's because I've spent limited time as an audience member since COVID-19 disrupted my typical viewing schedule, but it felt as if the historic building in the heart of the Lettered Streets neighborhood had been transformed into a place where magic was possible. As characters from various fairy tales came together to fall in and out of love, vanquish and cast curses, and sing about hope and betrayal and the idea that no one is ever truly alone, I believed their stories. 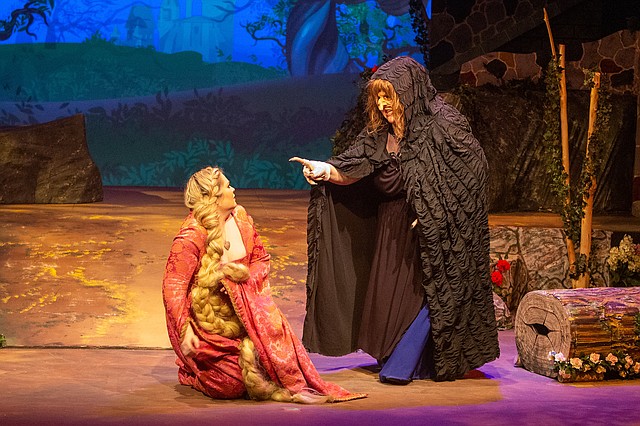 Rapunzel (Mackenzie Brown) gets a tongue-lashing by the Witch (Deborah Blakesley) after escaping from the tower where she was locked up. (Photo courtesy of Jay Solomon)

In program notes for “Into the Woods,” director Teri Grimes pointed out it was fitting BTG's first musical after a two-year hiatus was one of Sondheim's masterworks. The show is dedicated to the lyricist, composer and playwright who died in 2021, and Grimes paid homage to his memory while also exploring some of the deeper messages to be found in the play.

“Sondheim collects a series of happily-ever-after fairy tales, then turns them on their collective heads in a darkly-comic look at how our deepest wishes may not be good for us,” she said. “The characters wrestle with the question of the cost of wanting something else, or something more. As we travel the woods with them, we go from magical thinking to loss, responsibility and disappointment. Yet, there are glimmers of hope in these woods — hope that we may overcome the travails of the world with less wishing and more thinking.”

Despite the body count, “Into the Woods” is often laugh-out-loud funny. I'm thinking in particular of Little Red Riding Hood's gleeful transformation from innocent to avenger; two princes' exaggerated attempts to out-prince each other; a beloved cow named Milky White's hilarious eye rolls; Rapunzel's inane fixation on her hair; and the Baker's wife's attempts to wrest a golden slipper from Cinderella.

If you do, you'll be glad you did. Much like the woman sitting behind me who told her friend “this community theater is way better than the one they have where I live,” you won't regret it.