The project was his 'baby' 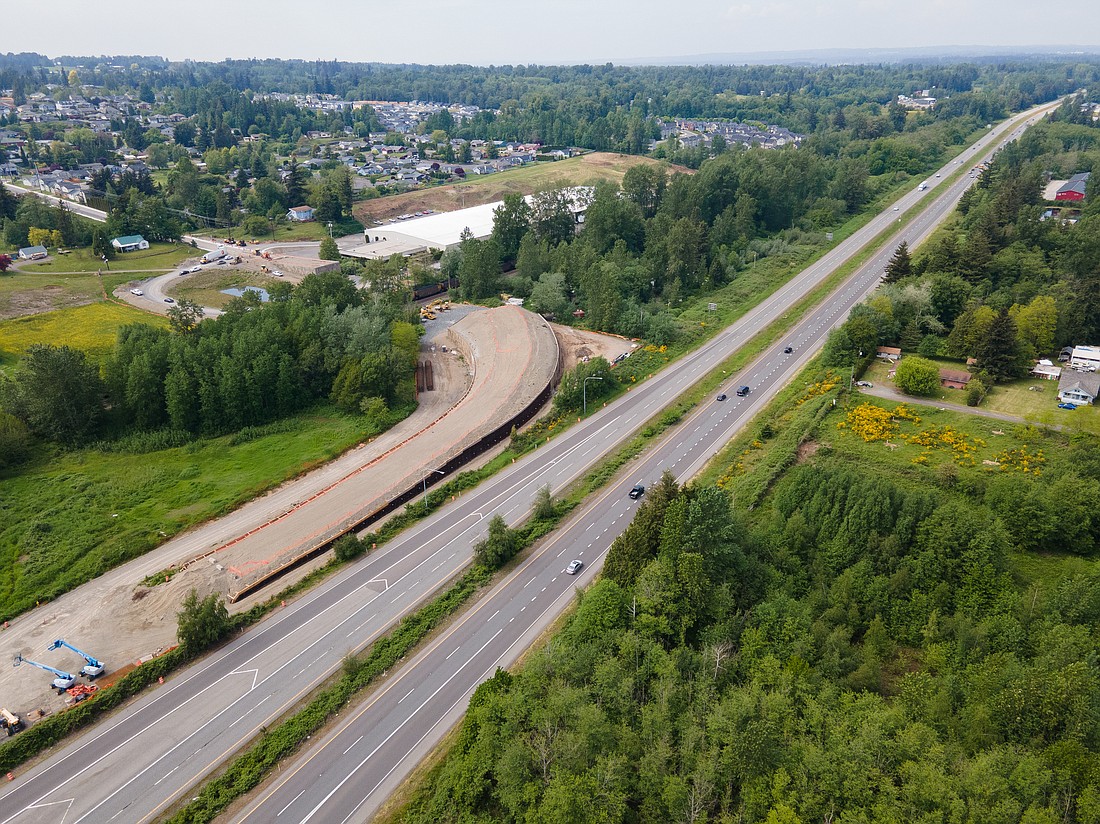 Crews work on the Thornton Street overpass May 31 in Ferndale. The railroad overpass immediately adjacent to Interstate 5 should be named after the late state Sen. Douglas Ericksen, three members of the Ferndale City Council argue in a CDN guest commentary. (Hailey Hoffman/Cascadia Daily News)
By Jon Mutchler, Erin Gunter and Herb Porter

A little over a year from now, a bunch of politicians are going to stand atop a hill as Ferndale’s mayor cuts the ribbon to mark the opening of the Thornton Overpass — providing a quick way for half of Ferndale to get on I-5, while alleviating traffic on Main Street and elsewhere for the other half.

Long-winded speeches will be made, pictures taken, balloons released, and those same politicians will all hope that some of the luster and buzz of the moment will enhance their political careers.

This is the largest road project ever undertaken in Ferndale and brings city-wide benefits.

Credit should be shared, especially among city staff, who work tirelessly to ensure that projects like this get done correctly, safely, timely and under budget.

But missing from the gathering, and possibly forgotten, is the dedicated public servant who, inarguably, did the heavy lifting to bring full funding of the project, some $20 million, to his hometown of Ferndale: state Sen. Douglas J. Ericksen.

Those in the know, who understand how Olympia works, give credit to the late Sen. Ericksen, who sadly succumbed to COVID-19 in December, leaving a wife and two daughters.

In the words of former state Rep. Luanne Van Werven:

“While several other legislators played a role in securing the funds for this needed project, there is no doubt it was the efforts and persistence of Sen. Ericksen that ultimately secured the funding for this important Ferndale project. It is also so fitting and appropriate that the bridge bear his name as Ferndale was the senator’s hometown throughout his entire tenure in the Legislature.”

“Sen. Ericksen worked tirelessly year after year, securing the funding and ensuring the project remained in the budget, despite several roadblocks and potential reprioritizations … no one pushed harder, nor had as much pull in moving the project forward, as Senator Ericksen ... Senator Ericksen did an incalculable number of great things for the residents of Ferndale and Whatcom County. Many of the victories and projects go unnoticed.”

“Sen. Ericksen worked tirelessly for the citizens of Ferndale, and I believe he has earned this remembrance of his legacy.”

Like any and all effective public servants and politicians, Ericksen had his opposition. If he didn’t, he wasn’t doing his job. And his community supported him, year after year.

Doug Ericksen never lost a state election and served Ferndale and Whatcom County for 22 years: six terms in the House, and three in the senate. His support was strongest in Ferndale.

Make no mistake, he was respected by both sides.

Sure, Doug was controversial only because he was courageous and consistent in his conservative convictions. Educated. Smart. Witty. Doug never backed away from a debate and would always best his opponents, doing so with poise and class.

Doug fought for freedom, personal rights, small businesses, safety, the environment and local jobs. He was a relentless advocate for our major employers, Intalco and the refineries.

Doug was Ferndale’s man in Olympia. His fingerprints of support are demonstrably found on projects that we may take for granted: the new Star Park recreation shelter and the Pioneer Village pathways, to name two.

With much effort, he advocated for the resurfacing and upgrading of the Northwest Soccer Fields at Northwest and Smith roads.

But it was the Thornton to I-5 connection that was his “baby.”

And what about that Champagne bottle popping photo-op mentioned above? It is highly unlikely it would have happened without Sen. Ericksen’s tenacity. He truly should be honored and remembered.

Because of that, and much more, we submit the resolution to name the bridge the Senator Douglas J. Ericksen Bridge, and invite supporters and opponents of the late senator to let the better angels of our nature reign and come together to enjoy the work and accomplishment of one public servant.

The authors are members of the Ferndale City Council.