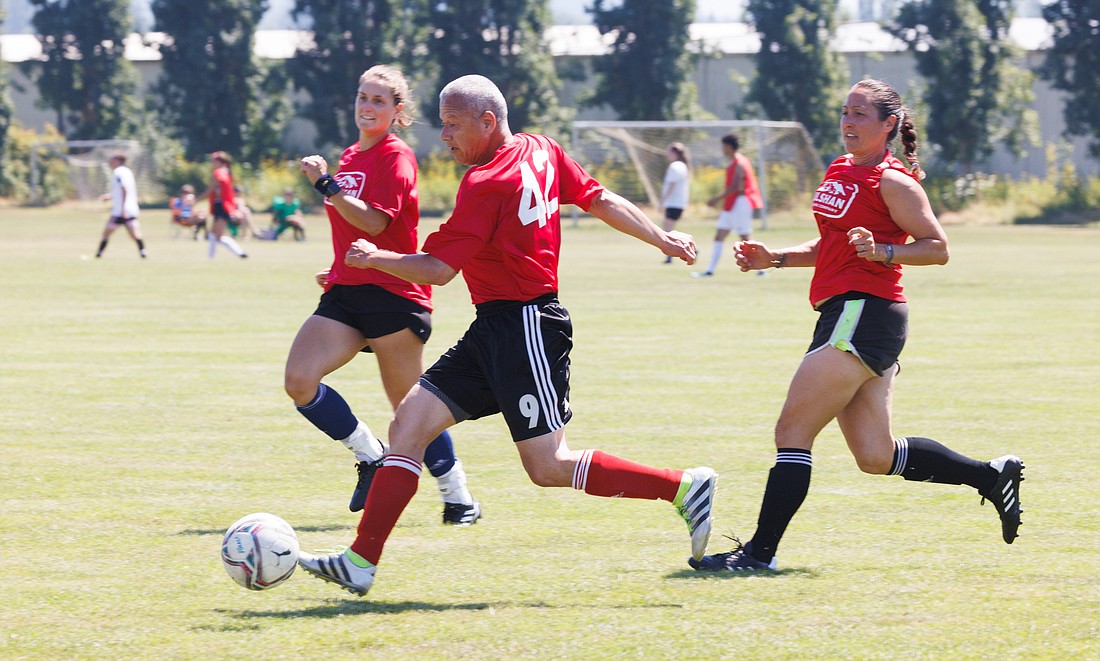 Across the open fields, clusters of camping tents dotted the grass, with Mount Baker rising above the treetops in the distance. Bags sat full of energy-rich snacks and water in preparation for the year’s hottest weekend, so far. Athletes laced up their boots — but not hiking boots. Soccer boots.

Show Me the Mané took first in Division 1, and Over 9000 won Division 2. Division 3’s top team, Space Donks, won its final, and the tournament finished up with The Cat’s Meow clinching first in the over-30s bracket. 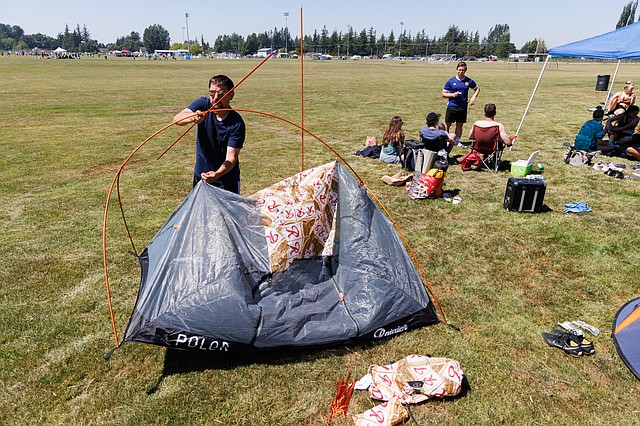 As his teammates take a lunch break, Dominic Van Der Jagt sets up a tent during the soccer tournament. Van Der Jagt and his team, from the Seattle-Tacoma area, stayed overnight at the field. (Andy Bronson/Cascadia Daily News)

To combat the heat radiating off the artificial turf fields, teams popped open collapsible canopy tents for substitute players to sit under. Opposing teams sometimes sat side by side, sharing shade and water spray bottles.

Elsha Grimes, who works with programs and events through Whatcom Sports and Recreation, estimated that 60% of participating teams were from outside of Bellingham, with some driving in from Seattle, Tacoma and Olympia.

Several visiting teams opted not to stay in hotels and instead camped along the edges of the soccer complex, setting up tents, Spikeball and snack tables.

The majority of Josh Dube’s team, I’d Hit It, came from Olympia to play in the Division 1 tourney, with a few teammates living closer to Bellingham. Team members camped out near the fields on Saturday night and passed the time with meals, conversation and games like Uno.

“If [camping] is available, that’s a big key for us,” Dube said. “Traveling, hotel rooms, that can add up, so if you can just camp and cookout, that’s a big motivator.”

Other players were Bellingham locals and regulars at the Bellingham Sportsplex or in nearby adult leagues. Some teams brought families and children, sitting in the shade of the canopy tents as well. 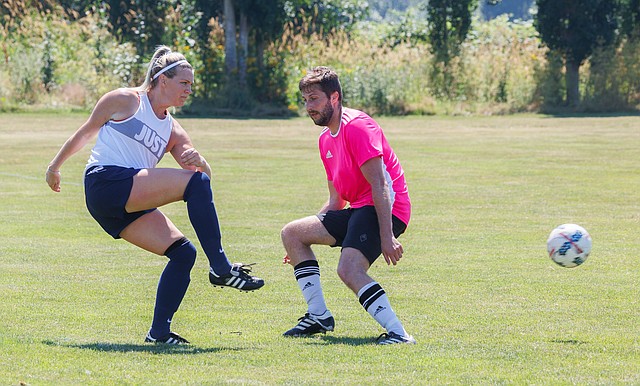 “[The soccer community in Bellingham] is kind of unique in that we’re geographically isolated a little bit from the larger Washington soccer community, and that kind of comes together to create a pretty tightly knit group at all the levels,” said Tanner Gray, soccer director for the Sportsplex and Whatcom Sports and Recreation.

Dan Sorenson said his team consisted of friends who had been playing with or against one another in local leagues for 10–15 years and would form teams together come tournament time.

“[Playing together] keeps the friendships going and makes them stronger,” Sorenson said. “We all do stuff outside of soccer, too, so it’s fun to have all the families together coming out to support ... We usually do barbecues and other things alongside the tournament, too.”

While other local annual sports and recreation events took a break due to COVID-19, the Hammers Classic’s inception took place coming out of the pandemic, with the tournament facilitated by Whatcom County and the Sportsplex for the first time in 2021.

Grimes said there was a need for activities and “something for the adult population to do, getting back out to run and play” after a couple of years without those opportunities.

Each game was an hour long, playing full-field 11v11, with five men and five women on the field at all times, plus a goalkeeper.

“It’s good competition,” Dube said. “We know a lot of the other players from the other teams. A lot of these teams travel to the same tournaments, so it’s fun to see familiar faces.”

The tournament utilized two turf and two grass fields out of the eight total fields at Phillips 66 Soccer Park. Nearby, Menace Brewing set up a beer garden.

Grimes said there is still room for the tournament to grow after registering around 16 teams in 2021, then up to 23 in 2022.

“All these fields full, that’s the goal,” Grimes said.