'Untethered': Western Summer Theatre is on the intersection 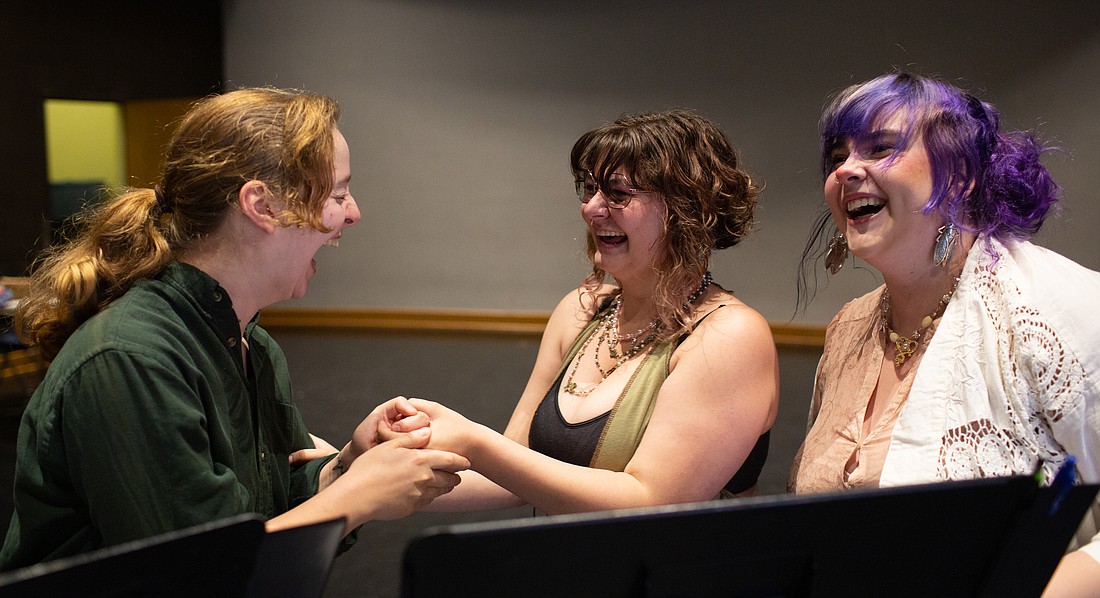 From left, Sarah Williams as Bee, Ella Hieronymus as Freddie and Jo Graves as Voice Of God laugh together while rehearsing the musical “Untethered” at Western Washington University on July 24. The play will run at WinkWink Boutique from Thursday, July 28, through Saturday, July 30. (Hailey Hoffman/Cascadia Daily News)
By AMY KEPFERLE
Staff Reporter

It was late afternoon on a sunny summer Sunday, but the students gathered in the dark rehearsal space at Western Washington University's Performing Arts Center didn't seem put out that they were missing a perfect-weather day in the Pacific Northwest.

If anything, the energy the cast, crew and director were radiating was that there was no place they'd rather be. As they rehearsed songs and ran lines for the original musical “Untethered” — which will show July 28–30 in downtown Bellingham at a staged reading showcase at WinkWink Boutique — it was evident creative collaboration was the name of the game.

Since the play was commissioned by the university's Student Theatre Productions for Western Summer Theatre, this wasn't a surprise. Students Brighid Leonard and Kaitlin Losansky wrote the script, Sophie Kashman and Madison Joy LeFever handled music and lyrics, and a stellar crew of actors and singers were now bringing the words and songs full circle. 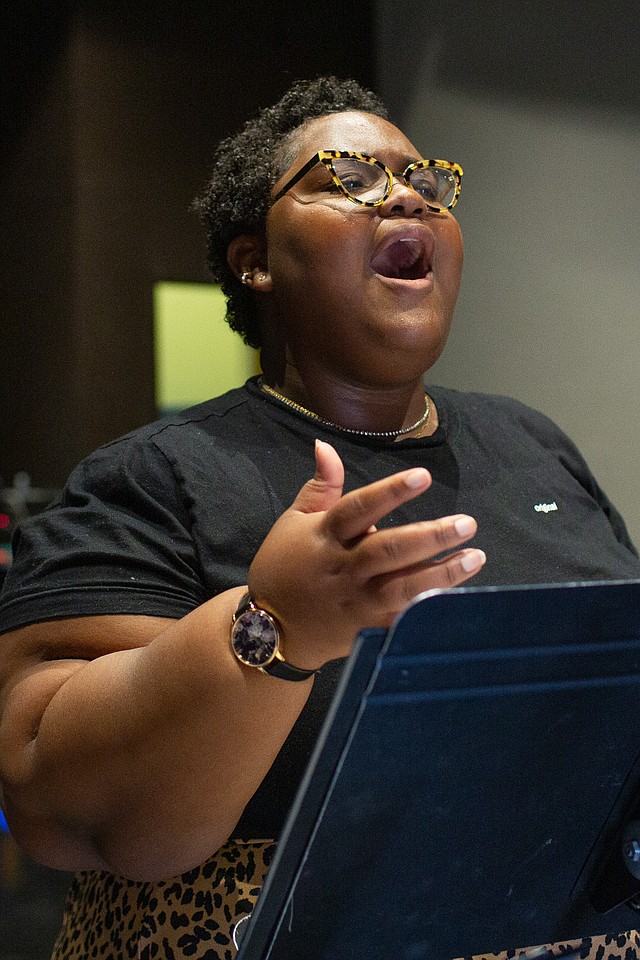 Taking place in 2018, “Untethered” follows Celeste, a freshly divorced woman now working in a grocery store who finds comfort in a flirty online relationship with Bee, a rural Magic the Gathering fan in search of both community and connection. They meet through an app called Tethered, and the cast includes virtual counterparts of the two main characters.

In the script, Celeste's character is described as someone who “moves sideways yet (is) still stuck. If she acts like everything will be fine, it will be.” Bee can be “a bit of a pushover.”

It's not a mistake that, when considering casting for the role, Celeste's character is described as being genderqueer. Additional notes include that the play is intended to be performed by actors of color, trans and queer actors, and plus-sized actors. Playwrights Leonard and Losansky were intentional about bringing their own experiences to light in a play that focused on the queer community without having the plot be mired in trauma — and that included bringing the stories of real people into the mix.

“It’s such a supportive and progressive queer-centered story,” director and longtime Western drama professor Kamarie Chapman said. “The idea of creating theatre for all humans shouldn't be that new, but the trend now is for playwrights to take that control and encourage makers to go for it. I think it's a refreshing change when looking at new scripts.” 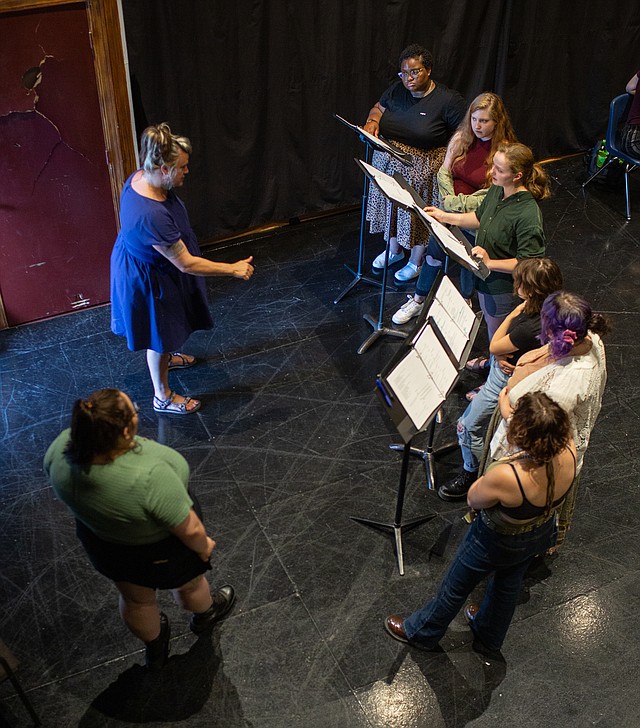 This will be the second summer Chapman is helming the On the Intersection series as part of Western Summer Theatre, and she said giving the students a voice in every aspect of the production has allowed for exponential growth from everyone involved.

The playwrights agree the script has come a long way since they started co-writing it in March. They've also seen how their story has impacted the cast. After the first read-through, Losansky said the actor playing Virtual Bee (Eloise Cooper), said they'd never read a story about queer adults living their adult lives and also being queer.

“They said seeing people who are in their late 20s and early 30s having breakups, experience grief and pain, having mundane jobs and not knowing what they're doing with their lives was really comforting,” Losanky said. “It made my gay little heart so happy.”

Leonard added that seeing the characters in “Untethered” go from page to stage has been incredibly helpful as a writer.

“The performers are who bring it to life,” Leonard said. “It goes from a hypothetical into this living, breathing thing in front of you. That's just the coolest thing ever. It makes the whole thing worth it.”

Music director, composer and lyricist LeFever said the learning experience working on the play has been invaluable. Although she's been writing music since she was 12 years old, this process forced her to learn to write from another person's point of view. Working alongside fellow composer and lyricist Sophie Kashman allowed for further collaboration. 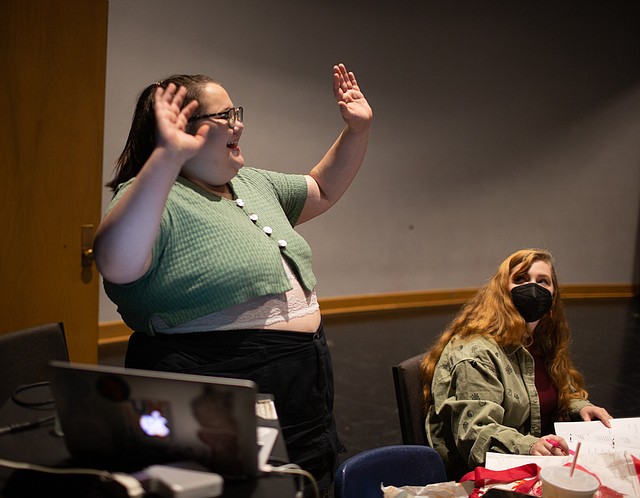 In a strange turn of events, LeFever said one of the characters' mothers passes away due to an overdose, and she was tasked with writing the song focusing on how the character Christie felt after finding out Celeste had lied about her ex-husband being dead.

“My dad passed away from an overdose when I was 13 years old,” LeFever said. “I got to write the song for Christie called 'Under Attack.' It's about being upset because Celeste lied to her. Going in and writing that song, I pulled a lot from the anger I would have felt if anybody lied to me about something like that.”

In the course of working together, Losansky, Leonard and LeFever have become close friends — and they say that goes for the entire cast. Those watching the staged readings will likely pick up on their connections, which will make for enhanced viewing.

Chapman said she chose to stage the readings for “Untethered” at WinkWink to support the identity-inclusive sex shop and performance venue, but also because it's easier to navigate than having people find their way around campus. It's downtown, near the bus station and closer to where people are dining or drinking.

“Also," she said, “it brings the students into the community rather than keeping them up on this giant hill.”