Who's giving candidates the funds that fuel their campaigns? 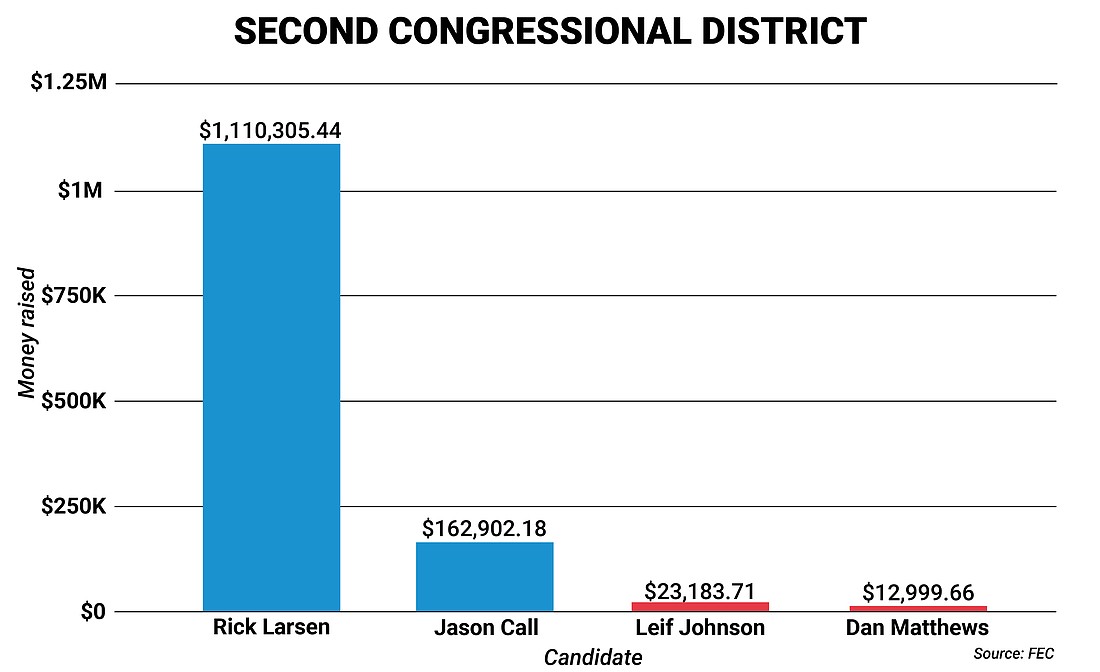 But as primary ballots are cast between now and Aug. 2, voters can discern a few things from the size of a candidate’s coffer — specifically, who can win or who should win in the eyes of those who have money to spend on election campaigns.

The race for a seat in Washington’s Second Congressional District is a study in contrasts.

Democrat Rick Larsen has received the most contributions, a likely product of both his incumbency and his willingness to accept corporate donations.

In the most recent Federal Election Commission (FEC) update, Larsen topped $1 million in contributions, with $1,110,300 as of July 26. Of that amount, almost $433,000 comes from individual donors, while more than $677,000 is from committee contributions, including corporate political action committees (PACs).

Among Larsen’s nine primary opponents, another Democrat comes second in contributions. So far, challenger Jason Call has raised $162,900, nearly all from individuals.

Call has received no donations from corporate political action committees, something he said is intentional due to his distaste for corporate involvement in politics. About 75% of the money Call’s campaign has received has been from donations of $200 or less.

Republicans Leif Johnson and Dan Matthews so far have received $23,184 and $13,000 in contributions, respectively. Johnson has raised $15,915 from individuals, with the rest of his money reported as contributions or loans from the candidate himself. Matthews loaned his campaign $15,000.

By one measure at least, a lot less appears to be at stake in local elections for positions in the state Legislature. All 12 candidates running for four seats in the 40th and 42nd legislative districts combined have raised nearly $1.3 million — only slightly more than the total for a single congressional candidate in Larsen.

But whoever wins these races will have a more direct impact on life in Whatcom and Skagit counties. They will consider new building standards in response to climate change and new zoning laws that would allow for more housing. They are arguably in a better position than a member of Congress to change voting laws, reproductive rights or access to guns. 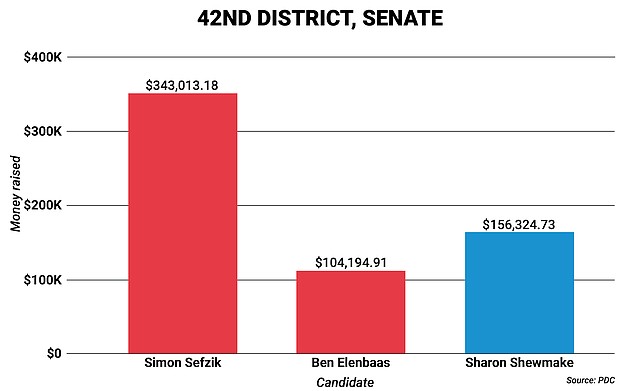 The importance of the Senate race in the 42nd Legislative District — all of Whatcom County except the southwest corner and south Bellingham — can be gleaned from the contribution totals in that race. Republican incumbent Simon Sefzik, who was appointed at the beginning of the year to replace the late Doug Ericksen, ranks third statewide among Senate candidates, and first among Republicans, with more than $343,000 in donations to date. By comparison, Sefzik’s two opponents, Democrat Sharon Shewmake and Republican Ben Elenbaas, have raised $261,000 between them.

The 42nd District has been a toss-up between Democrats and Republicans in recent election cycles, but the trend over the past four years has decidedly favored Democrats. Sefzik has attracted $107,700 from the state Republicans and other party organizations to keep the district's Senate seat red, but his campaign has also received broad support from individuals. Sefzik’s campaign has reported 135 separate $1,000 donations, which is the maximum dollar amount allowed per election for a state legislative office. (Many of these donors gave $2,000 total — half for the primary and half for the November general election.) 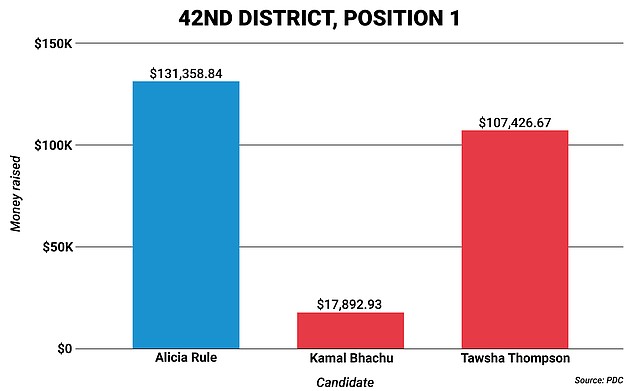 The biggest take among the nine candidates for local House seats is 42nd District incumbent Alicia Rule, whose campaign has brought in more than $131,000. Between her two Republican opponents, former Bellingham Police Officer Tawsha Thompson has by far the greater donation haul, at more than $107,000. 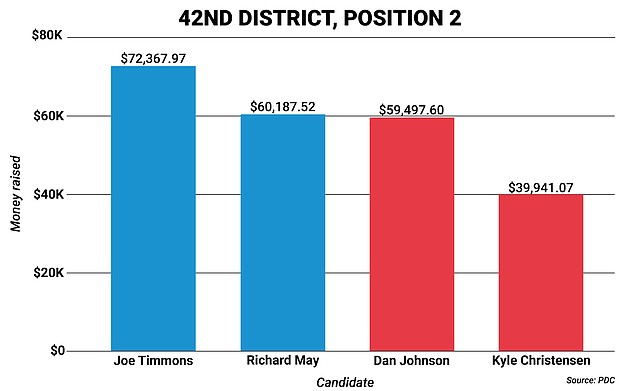 In the other 42nd District House seat, which Shewmake vacated to run for Senate, the race for campaign donations is close. Democrat Joe Timmons, who has worked under Gov. Jay Inslee, leads with more than $72,000. Fellow Democrat Richard May and Republican Dan Johnson have both raised about $60,000 so far. Kyle Christensen, the second Republican seeking Shewmake's old seat, has $40,000. 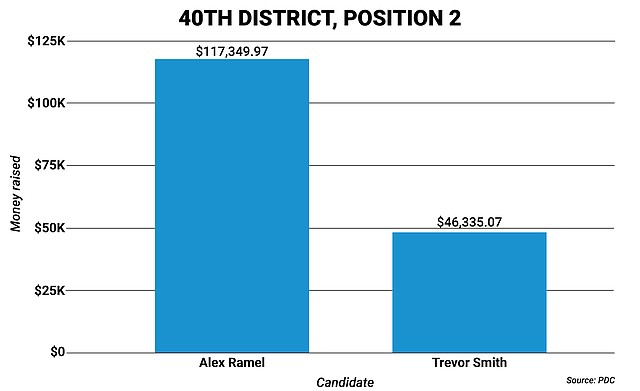 The lone 40th District race is a special case, and not only because it features two Democrats and no Republicans in a district that’s deep blue. In the district, which includes south Bellingham, Mount Vernon, Anacortes and San Juan County, incumbent Alex Ramel appears to have a wide lead in campaign contributions, with $117,000 compared to Trevor Smith’s $46,300. But Smith is getting considerable support from an independent campaign run by a group calling itself Citizens for Legislative Accountability. In support of Smith, the organization has spent more than $80,000 on TV, newspaper and web advertising, and mailers.

Transparency is an issue

Ramel and his supporters have criticized the independent campaign for being less transparent. Following the money involves tracing contributions from one political action committee to the next — and where this funding came from originally is often hard to discern.

“Their biggest donors are some construction trade unions, oil and gas companies, the Building Industry Association, Realtors, banks, Google and Amazon,” said Joe Fitzgibbon, chair of the House Democratic Campaign Committee, which has donated to Ramel’s campaign. “Those names don't show up on the communications that voters receive.”

Smith said he couldn’t speak on the efforts of Citizens for Legislative Accountability because he isn’t in communication with them — as required by state elections law. But he did offer an outside observation about the group’s tactics.

“This will be decided by the voters, so getting in front of them is the way to do it,” Smith said, adding that this approach was one of labor’s hallmarks.