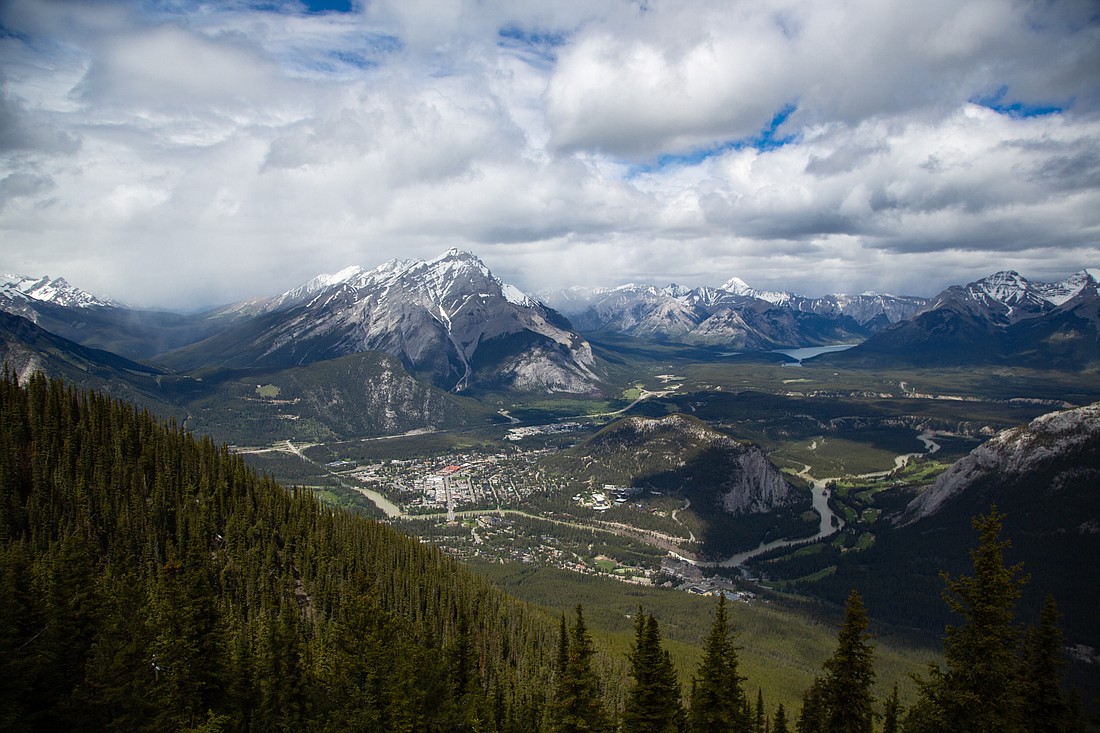 Clouds filter into the Bow River Valley above the town of Banff, Cascade Mountain and Table Mountain as seen from the top of Sulphur Mountain on June 23. Sulphur Mountain is one of the most popular mountain hikes in Banff National Park due to its proximity to the town, its sweeping views and the Banff Gondola that takes many visitors to its peak. (Hailey Hoffman/Cascadia Daily News)
By HAILEY HOFFMAN
Staff Reporter

Amid the high skies of Banff National Park, my fiancé and I climbed Sulphur Mountain — one of the most popular mountains in the area due to its conveniently-placed gondola. My chest heaved as we went; I could feel my heart pounding in my head. Climbing 2,000 feet (or about 700 meters à la the sensible metric system) in elevation is much different when you start at 6,000 feet, I reminded myself. My 24-year-old body — one that is more accustomed to slightly hilly bike rides, the occasional yoga class and sea-level hikes — slogged its way up the mountain.

After about two and a half hours, we reached the peak at 8,000 feet (or 2,451 meters to be exact) and were stunned by the vast sweeping views of the Bow River Valley, the town of Banff and the vibrant blue waters of Lake Minnewanka in the distance. Clouds danced among the tall peaks of Mount Rundle and Mount Norquay to the northeast and Fatigue Mountain and Mount Howard Douglas to the southwest. We watched mountain goats munch on the sparse brush and listened to birds sing as they flitted around us. 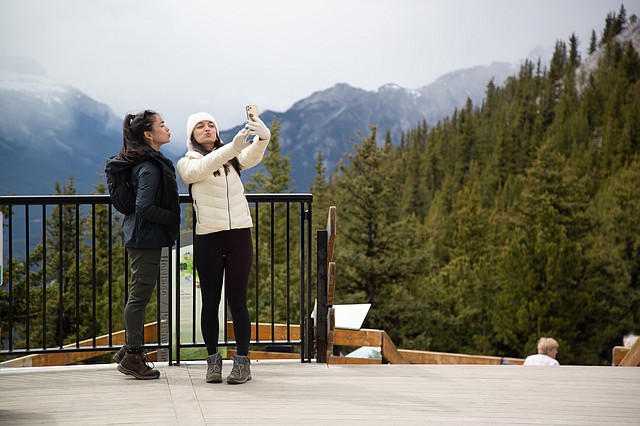 Visitors take selfies at the peak of Sulphur Mountain from the deck of the Banff Interpretive Centre. (Hailey Hoffman/Cascadia Daily News)

We were also stunned by the volume of tourists who’d made the same journey, except they made it in eight minutes via the iconic Banff Gondola that sweeps up the same hill to the Above Banff Interpretive Center. We took a trip inside and enjoyed a short film about the history of the region, featuring gorgeous helicopter imagery, old photos and stories. We stopped at a café — one of three restaurants in the center — for a hot coffee to refresh after the long hike.

We escaped back outside to enjoy our humble picnic lunch of fruit, Avenue Bread sourdough and Beecher’s cheese that we’d snuck across the border. Moments later, the weather changed, as it often does in the mountains, bringing whipping winds and stinging snowflakes. We stepped back inside and quickly descended from the peaks of the Canadian Rocky Mountains in the haven of the overpriced gondola. 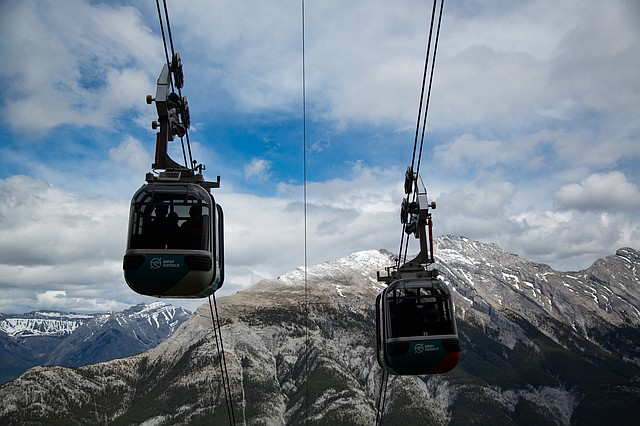 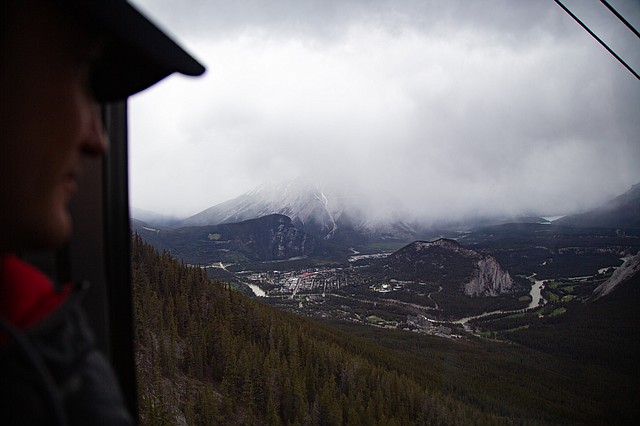 My fiancé, Jack Gram, looks out the window as we descended down Sulphur Mountain via the Banff Gondola. The weather quickly changed, bringing biting wind and snow. (Hailey Hoffman/Cascadia Daily News)

The trip to the top of Sulphur Mountain in Banff National Park isn’t a short one from Bellingham. It takes about 10 hours to travel 500 miles of winding mountain roads, rife with construction zones during the summer season.

We left on a Tuesday evening after work and drove straight to Kamloops, a town midway between the Canadian Cascades and the Canadian Rockies. Arriving late, we checked in at the century-old Plaza Hotel and dropped into our room, which, to my great joy, featured a replica of the iconic haunted Love Letters painting of a little girl with flowers just outside our room.

In the morning, we hit the Trans-Canada Highway again after paying more than $6 per gallon of gas. On the way to Banff, the famous roadway wound us past lakes and through small towns and passed among the peaks of the Mount Revelstoke, Glacier and Yoho national parks. We craned our necks to see the sharp precipices and the starts of long, cascading waterfalls. 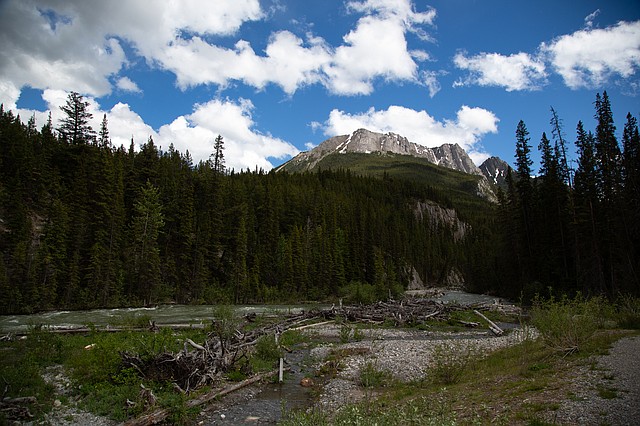 We stopped at a picnic area along the Bow River for lunch in the last stretch of our journey to Banff. (Hailey Hoffman/Cascadia Daily News)

Once we crossed into Banff National Park for the price of a 63 Canadian dollar park pass for four days, we headed for the small town of Banff and to our CA$30-a-night campsite at Tunnel Mountain Village to begin our ambitious getaway.

One thing I was impressed by was the accessibility of the region. For the most part, we left our car at our campsite and walked to the Roam Transit bus stop to head into town to chat with park rangers at the visitor center or for a CA$10 stein of local beer from Banff Ave Brewing Co. From town, we hopped on busses for a “twoney,” a $2 Canadian coin, to head to popular trailheads and other natural attractions.

Beyond the general ease of transportation, the park featured many paved paths and alternate transportation — like the gondola — which allows anyone, no matter their age or ability, to enjoy the majestic views that the park has to offer. From our campsite the night we arrived, we took a short five-minute walk to a paved trail which overlooked Hoodoos, the Bow River Valley and Mount Rundle. From our perch, we watched a herd of elk frantically crossing a fork of the river down below. In my head, I could hear Helena Bonham Carter narrating the desperate, anxiety-filled attempts of the young elk trying to follow their mothers as though it were an episode of Netflix’s newest nature show, "Wild Babies." 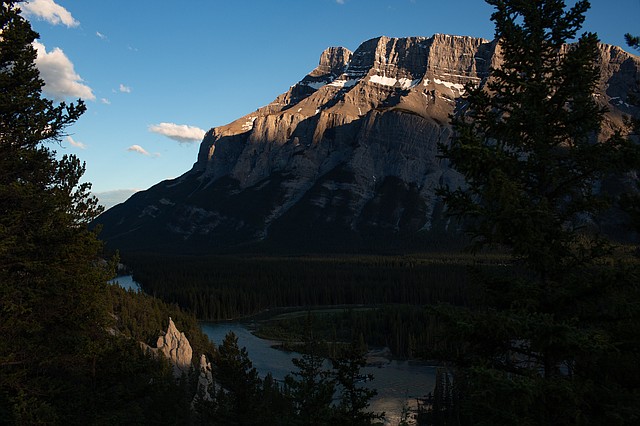 Mount Rundle looms over the Bow River Valley as seen from the paved Hoodoo's Viewpoint trail at sunset on June 22. A hoodoo — a tower of rock created by thousands of years of erosion — is visible from the trail. (Hailey Hoffman/Cascadia Daily News)

Lake Louise and Moraine Lake are known for their crystal-clear waters and dramatic snowy peaks. Photos of bright red canoes on the glacial lakes plague every travel photographer’s Instagram because the beauty is simply unparalleled. 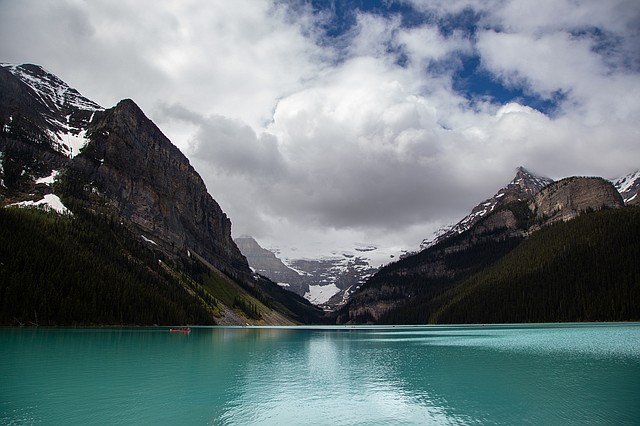 We traveled via bus from Banff to see the bright blue waters of Lake Louise on June 24. The lake is fed by a glacier, and visitors are able to rent canoes during the summer and ice skate in the winter. (Hailey Hoffman/Cascadia Daily News)

We were able to watch the sun light up the mountains and reflect off Moraine Lake early in the morning on our last day. We ordered overpriced lattes from a café in the iconic Fairmont Chateau, and people-watched from the shores of Lake Louise. We listened to conversations in every different language, watched wanna-be influencers take photos on the lakeshore and a frantic wedding planner set up a lakeside ceremony that cost, at a minimum, $32,000. We rode horses to Lake Agnes, above Lake Louise, and visited the famous tea house to sip on teas made with the water from the icy lake. 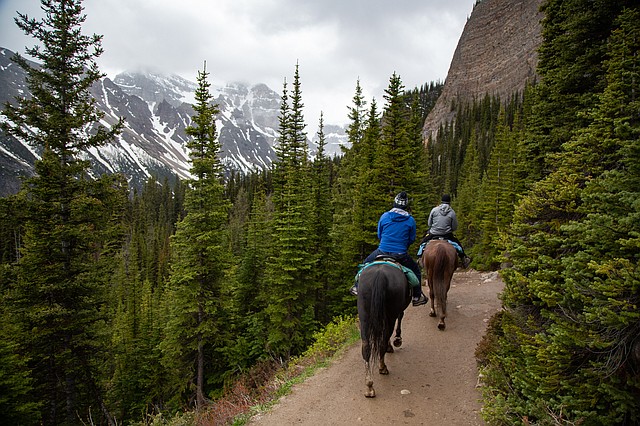 Fairview Mountain and other peaks were visible on our rainy trail ride to Lake Agnes with Timberline Tours on June 24. (Hailey Hoffman/Cascadia Daily News) 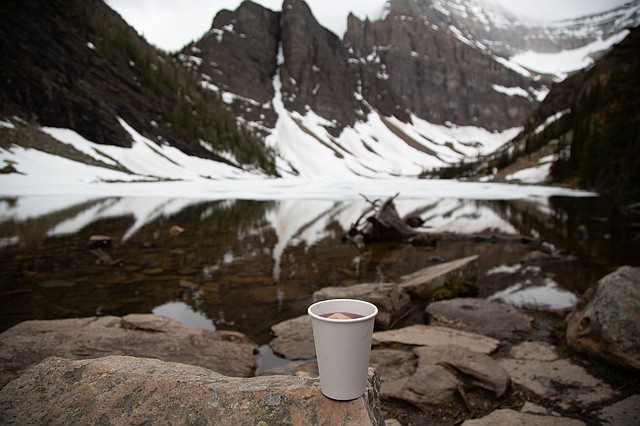 A to-go cup of tea sits on the shore of Lake Agnes. Every day, workers hike two miles to the tea house with supplies and use the water from the lake for the tea. (Hailey Hoffman/Cascadia Daily News)

Because of the popularity of these lakes, they can be tricky to get to. Approximately 4 million people visit the region each year, according to Banff National Park, many of whom make a stop at the iconic lakes. To get there, visitors have two options: bus or car.

Roam Transit has a shuttle that takes visitors from the town of Banff to the shore of Lake Louise, but the service does not continue to Moraine Lake. Parks Canada has its own shuttle system that runs between the park-and-ride off Highway One, Lake Louise and Moraine Lake. The bus systems are separate unless visitors spent the CA$25 on a super pass from Roam. Then, they’re allowed to hop on and off whichever busses they want.

To drive, many can find a spot at Lake Louise's large parking lot, but the odds of snagging one of Moraine Lake's 100 spots are slim. The best time to find a spot is probably about an hour after sunrise when all the sunrise photographers leave. My fiancé and I woke up at 4 a.m. to try and catch the sunrise but were met by an already full lot. He, to my extreme gratefulness, dropped me off to watch (and take photos of) the sunrise. He came back an hour later to find a half-empty parking lot, and we explored the lake together. 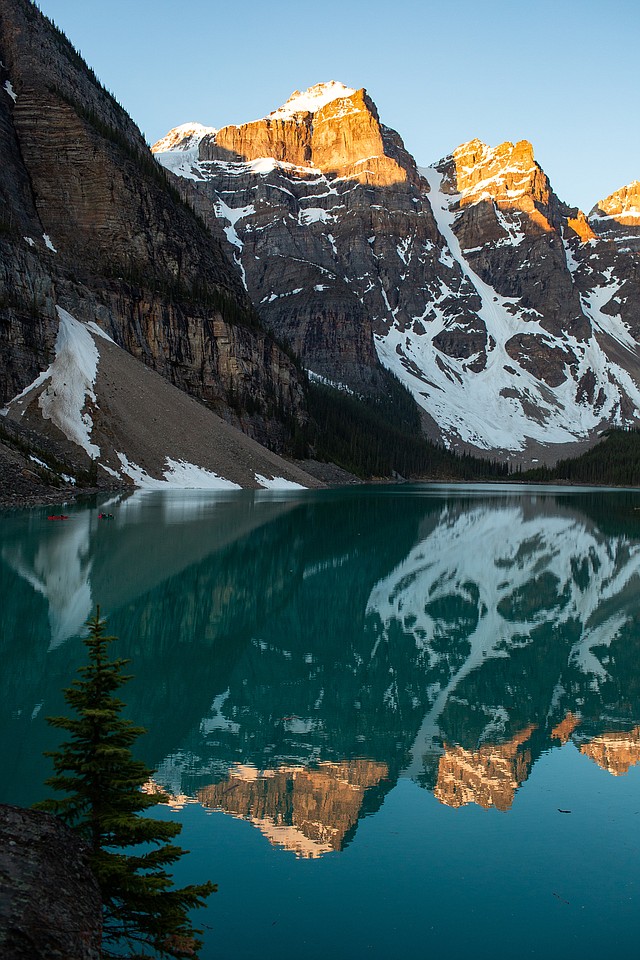 The sun lights up the tips of the famous peaks surrounding Moraine Lake on June 25. The lake is fed by glacial runoff in the Valley of the Ten Peaks. (Hailey Hoffman/Cascadia Daily News) 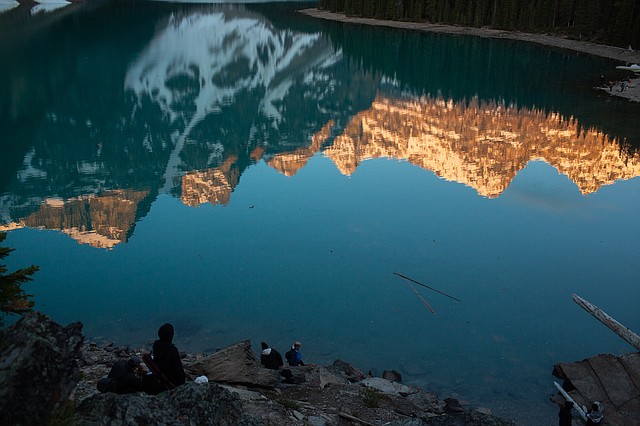 Photographers and visitors watch the sunrise and reflect off of Moraine Lake. The lake is an extremely popular sunrise spot for photographers from around the world. (Hailey Hoffman/Cascadia Daily News)

Banff is worth the hype. If you want to go, it is absolutely worth the trip. The region is a giant outdoor playground with opportunities for hiking, skiing, biking, climbing or just lounging in a mountain escape. Anyone, no matter their age, ability or comfortability with the great outdoors, can find a way to immerse themselves in the beautiful region.