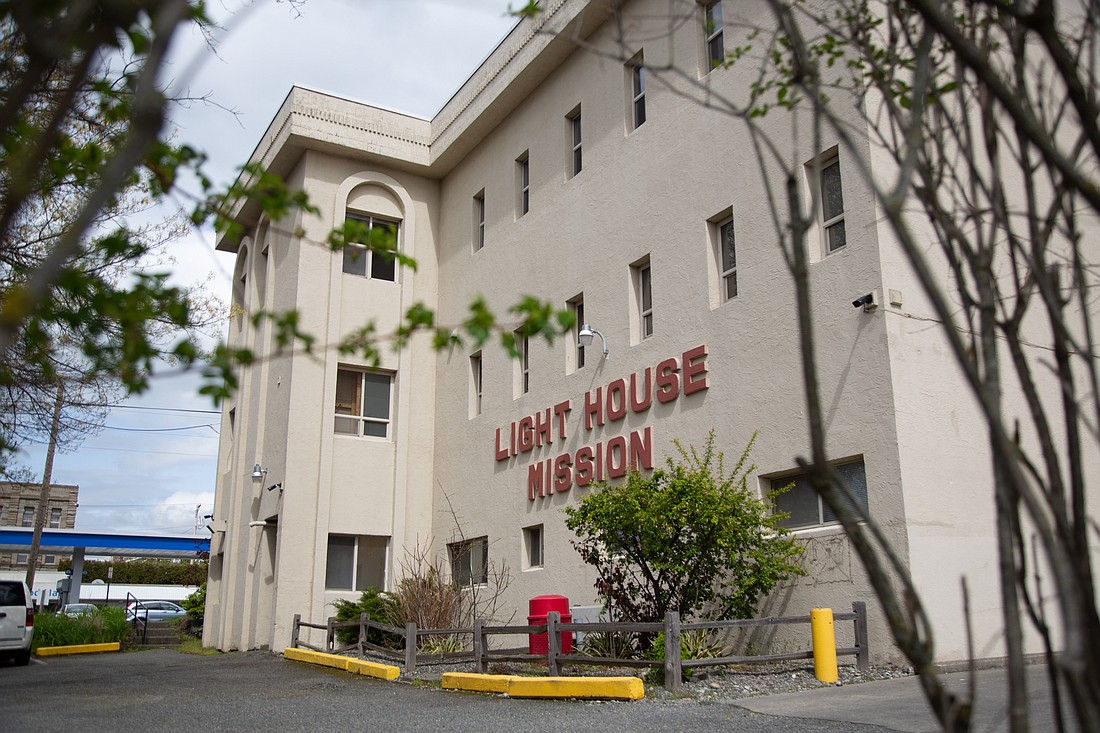 The Lighthouse Mission center at 910 W. Holly St. would be torn down to make room for a new 300-bed homeless shelter. First, Bellingham Hearing Examiner Sharon Rice must approve the project. Her decision is due by July 14. (Hailey Hoffman/Cascadia Daily News)
By RALPH SCHWARTZ
Staff Reporter

A proposed 300-bed homeless shelter in Bellingham’s Old Town is in the hands of the city’s hearing examiner, who will decide by July 14 whether to approve the project over the objections of some neighbors.

A key decision Bellingham Hearing Examiner Sharon Rice must make is whether to grant Lighthouse Mission Ministries an exemption to the city’s 200-bed limit on homeless shelters. The Christian nonprofit plans to construct a multi-purpose shelter at the site of its current center at 910 W. Holly St. — a 200-bed “low-barrier” shelter that doesn’t require sobriety but does enforce rules of conduct, plus another 100 spaces for families and for people with special medical needs. The new building, to be completed in 2024, would also offer an additional 100 beds during weather emergencies.

The city’s planning staff recommends the hearing examiner approve the shelter and grant the exemption to the 200-bed limit.

The hearing examiner took public testimony at a hearing that ran longer than seven hours and was split into two evening sessions, June 8 and 13.

Statements provided over Zoom during the hearing came after the city had already received nearly 100 written comments — 60% opposed to the new shelter and 40% in support, according to figures provided by the city planning department.

Some residents who testified at the hearing weren’t opposed outright to the shelter. They only wanted to see its capacity reduced.

“The proposed increase in size is a very worrying concern because as it gets bigger, there's a lot more friction with the neighborhood,” Geoffrey Vogel said.

Residents of the Lettered Streets neighborhood, where the new shelter would be sited, already have a history with Lighthouse Mission's shelters. The Drop-In Center operated at 1013 W. Holly St. from 2016 until pandemic social-distancing requirements forced it to relocate in 2020 to Bellingham High School and then the former Bellingham Public Market on Cornwall Avenue.

“These crimes and public safety hazards totally ceased when the Drop-In Center relocated out of Old Town,” Steen added.

Lighthouse Mission President Hans Erchinger-Davis admitted during the hearing that his organization wasn’t prepared for the large demand seen at the Holly Street Drop-In Center from the day it opened.

“I apologize for that first year, where people were having such challenges in the neighborhood,” Erchinger-Davis said. “It was our first go at low-barrier interventions to that degree, and … we have learned a lot since then.”

Don Almer, chief deputy of the Bellingham police, said the frequency of police calls to the Drop-In Center declined after that rocky first year, in part because Lighthouse Mission staff reached out to police to learn how to manage the large numbers of people who would wait in line or linger outside the old center.

“There is going to be some impact” from the new shelter, Erchinger-Davis said, “but we do believe that the mitigations that we’ve learned over the last few years are going to be super helpful at reducing … that concern.”