Trail Rule One: Have fun out there 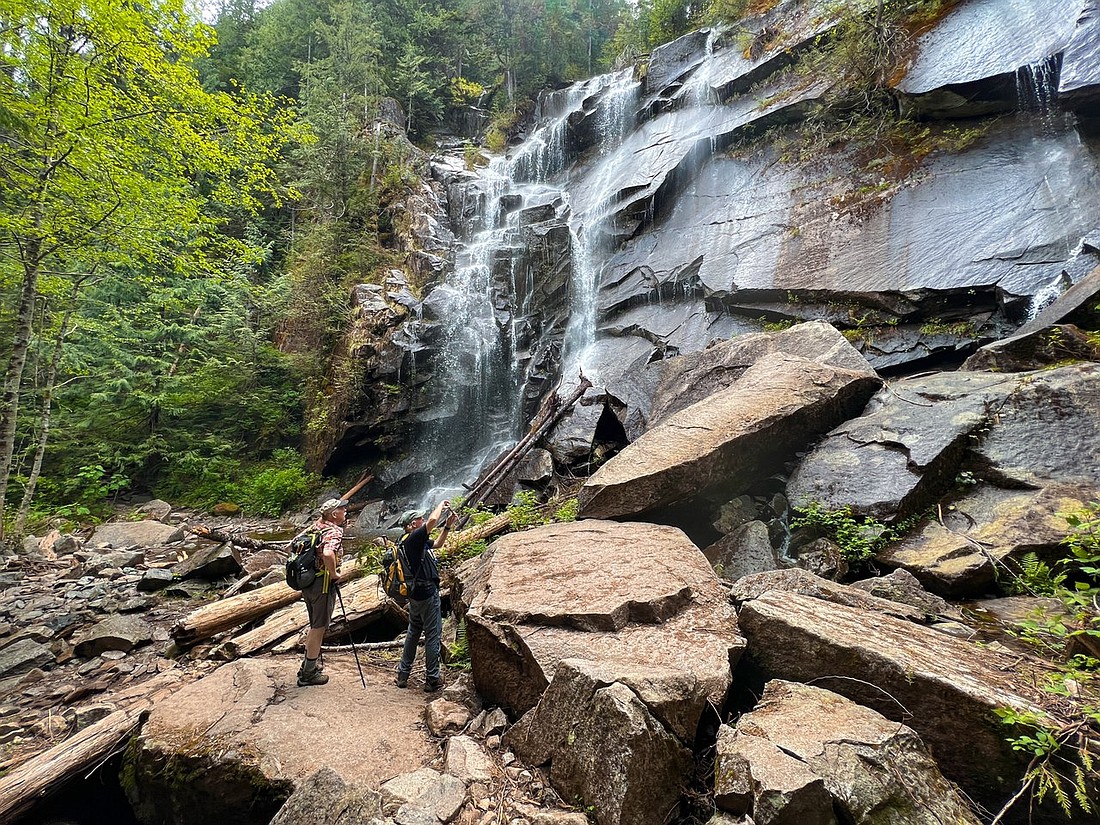 Have fun out there.

That’s it. No edicts, rules or Zen-like decrees about communing with nature.

Harrison, an energetic 70-year-old Fairhaven realtor, has been promoting fun mid-week excursions with the Boomers Hiking Club for 16 years.

He does not need to review trail etiquette with an experienced Bellingham outdoors group that shares a deep passion for the Cascadian wonderland with the Head Boomer.

I lobbied to join the amiable folks on a popular day hike in the Mount Baker-Snoqualmie National Forest that I had never tried.

Harrison promised a spectacular day with a challenging hike to Lake Serene that included a side jaunt to 1,328-foot Bridal Veil Falls, which spills over sheer walls of blackened granite slabs in four sections. 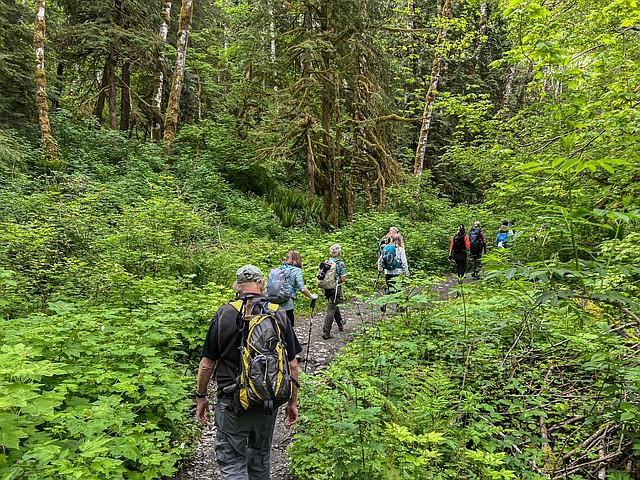 CDN outdoors columnist Elliott Almond, back, became the caboose on an 8.2-mile trek to Lake Serene on June 1, with the Boomers Hiking Club of Bellingham. (Photo courtesy of Ken Harrison)

It should not have been surprising that the trailhead parking lot was filled with cars on a weekday because of the hike’s proximity to Seattle and Everett in the Skykomish Basin off U.S. Highway 2.

With the North Cascade hiking routes on hiatus because of deep snow, we headed 1 1/2 hours south and east to a major attraction in the Stevens Pass Greenway. Serene’s thigh-burning route includes the aforementioned waterfall, an inviting alpine lake surrounded by the steep rock towers of 6,000-foot Mount Index and 4,262-foot Philadelphia Mountain.

Not many hikes offer such variety, leading some outdoors people to pronounce Serene as one of Western Washington’s best day hikes. But not me. The best day hike in Washington is the one I am taking at any particular moment.

Harrison had it right. The 8.2-mile trek with 23 switchbacks and wooden staircase after staircase is worth the exertion. A tributary trail takes hikers to the side of Bridal Veil for up-close views of gushing water that spray paints the rock. 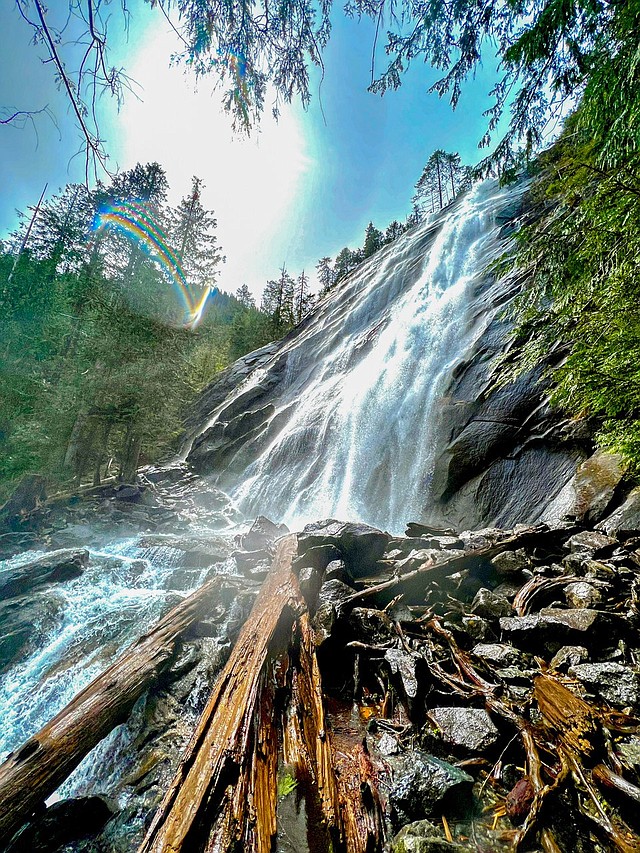 Harrison knew of my love of old trees. While few mention the impressive specimens along the trail, the hike to Serene has some ancients that Harrison signaled out. He found a thick and healthy spruce that stood as straight as a soldier at attention. We marveled at a large, old Douglas-fir.

I forgive anyone powering past these statuesque conifers while picking their way toward the plunging waterfall, snow-covered lake and magnificent spires of Mount Index.

But I couldn’t help thinking how lucky we are people cared enough to protect some of the treasures here from logging interests that have made fortunes felling great swaths of forestland. 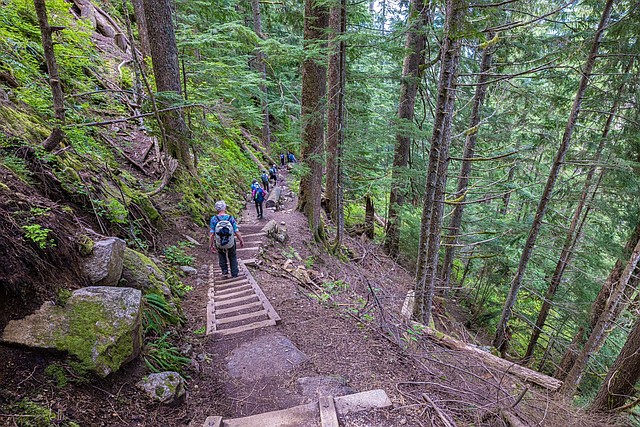 Hiking down the rocky trail that included wooden staircases was more treacherous than the ascent during a trek to Lake Serene. (Photo courtesy of Ken Harrison)

Five years ago, Seattle-based nonprofit Forterra worked with Snohomish County officials to buy the entire parcel for $800,000. Forterra owns and manages the acreage.

In a model private-public partnership, Forterra began with about $400,000 from the Snohomish County Conservation Futures program — a property tax fund started in 1988 to acquire open space.

The Serene deal was secured in 2018 after Forterra agreed to allow Weyerhaeuser to harvest second- and third-growth timber on a 57-acre portion of the property located away from the trail.

“Just because it was misused in the past doesn’t mean you can’t change the trajectory for the better in the future,” said Michael Storace, a Forterra project manager on its conservation team.

Having contiguous blocks of forestland is important. If managed with care, a harvested forest can enjoy a rebirth to approximate the way it once looked.

While Weyerhaeuser started a reforestation effort before the selloff, Forterra planted additional trees “to provide for a diversity of species,” according to a press release. 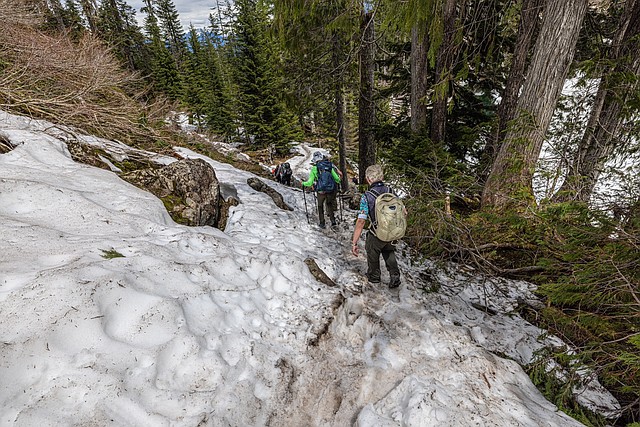 Soft, snow-covered small sections of the Lake Serene Trail near the lake during a trek. (Photo courtesy of Ken Harrison)

An obvious question occurred to me: Why wasn’t the U.S. Forest Service involved with the acquisition as the Lake Serene trail mostly lies within the Baker-Snoqualmie boundary?

It comes down to a little-known area of land ownership called severed mineral rights, Storace said. The forest service has a long-standing policy of not accepting land where the property owner has sold the mineral rights to a third party. Federal officials worry that whoever owns the rights might one day try to extract the metals, Storace said.

“Forterra can step in and own and manage the property when the forest service is unwilling to do that,” he said. “Sometimes you have to accept a certain level of risk if you want to reach the goal.”

The Serene purchase is part of a larger effort by Forterra to preserve places along the Highway 2 corridor. The nonprofit in 2019 secured a 320-acre Maloney Creek and Forest property that includes old-growth trees and habitat. 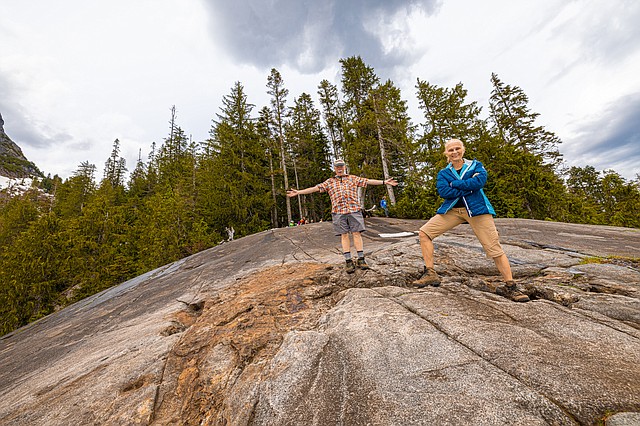 Bellingham’s Sandy McIntire, left, and a Romanian woman from the Seattle area pose on June 1 on Lunch Rock, a popular destination at the end of the Lake Serene Trail. (Photo courtesy of Ken Harrison)

Next up, Forterra is partnering with the U.S. Forest Service and Snohomish County to secure a 102-acre addition to Lake Serene.

The sidenote of forest preservation quickly faded on the steep, rocky trail that never seemed to end. My debut with the Boomers was not going well as I lagged far behind these mountain goats with hiking poles.

I finally reached our destination at the appropriately named Lunch Rock after a final ascent across a melting snowfield. I could barely mutter a word from exhaustion. The background music of happy fellow hikers echoed across the snow-covered Serene and up the crumbling walls of the peaks surrounding us.

Then the group took off again.

Descending was even more troublesome. But group veteran Sandy McIntire patiently escorted me all the way down.

My leg muscles would complain in the coming days.

“That’s a challenging hike,” Harrison repeated over and over.

Sure was. But boy, was it fun. 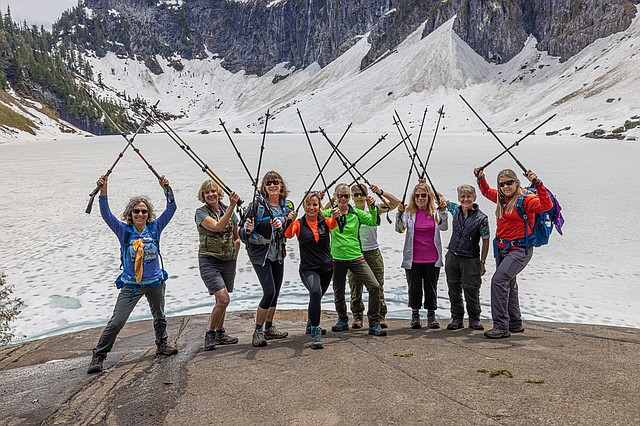 Members of the Bellingham Boomers Hiking Club pose with their hiking poles while standing on Lunch Rock, overlooking Lake Serene in the Central Cascades. (Photo courtesy of Ken Harrison)

Directions: Look for Mount Index Road off U.S. Route 2 just west of the turnoff for the town of Index. (You’ve missed the turnoff if you cross the Skykomish River bridge into Index.) Go right less than a half-mile on the road and the parking area is on the left after 600 feet.  Arrive early because the trailhead parking lot has space for about 50 cars.

Trail notes: The trail traverses an old logging road before steadily climbing through a thick forest. The trail splits at 1.7 miles where a sign shows a path to the right to Bridal Veil Falls. Hike the half-mile up to the falls before reversing course to the junction for the slog to Lake Serene.

This story was updated to clarify the scope and timing of Seattle nonprofit group Forterra's acquisition of land parcels in the Highway 2 corridor.