Just admit it, Bellingham: You've got a rush hour

Get used to it, says city traffic-planning guru 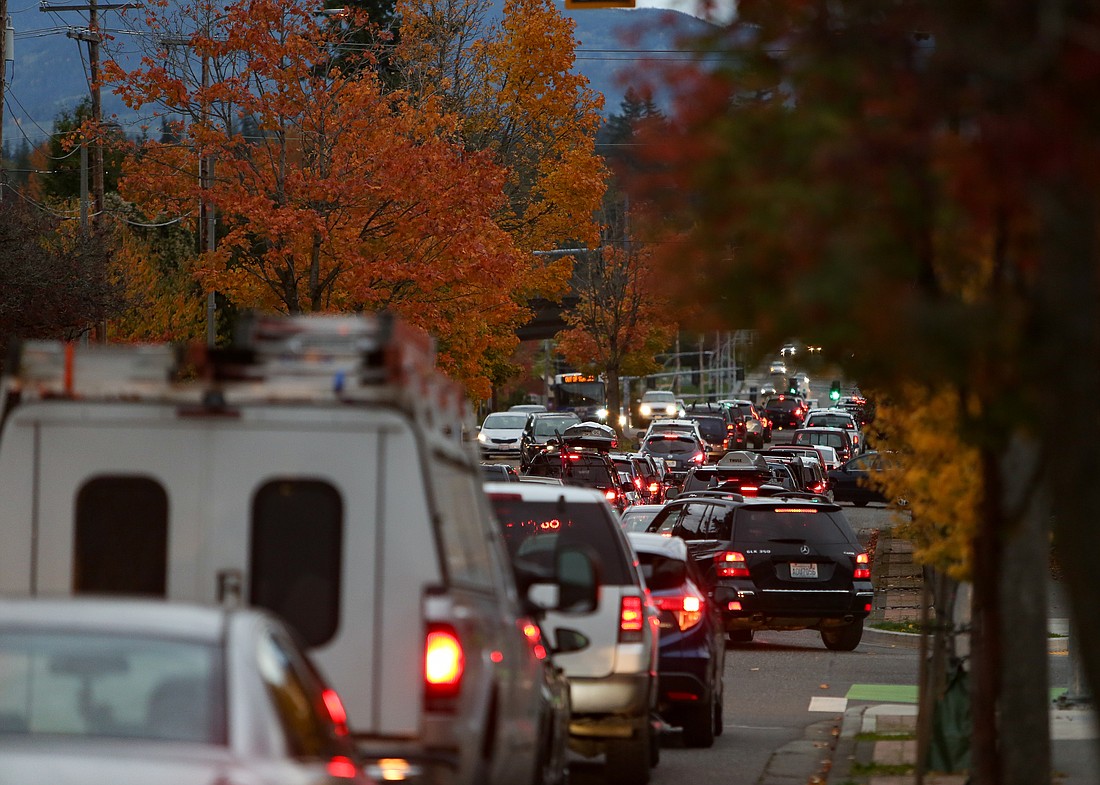 Cars jam Lakeway Drive, heading for I-5, on a fall day in 2021. (Hailey Hoffman/Cascadia Daily News)
By Payton Gift, with CDN Staff

Sometime during the past decade, it slithered quietly into Bellingham’s collective consciousness — a two-word descriptor that still prompts chuckles from newly arrived Seattle-area traffic refugees:

Does Bellingham and Whatcom County now officially have one? Sorry, but yes — at least in the eyes of longtimers. Make it two, morning and night.

Call it what you will, but anyone who has sat in a sea of morning or evening brake lights, trying to access Interstate 5 at the city’s primary freeway access points, knows it when they’re stuck in it.

A number of frustrated commuters interviewed by Cascadia Daily News said their frustration with commute-time blockages that seem to have peaked suddenly marks a dramatic shift in lifestyle from when they moved to Whatcom County as recently as five or 10 years ago.

Conversely, newly arrived residents, many fleeing the traffic hell of the Seattle area, appreciate what to them feels like open roads.

“One of the several reasons I left Seattle after four decades was the impenetrable traffic,” said recent arrival Frank Catalano, an Alabama Hill remote worker. “No matter where you lived in the greater Seattle region, no matter when you drove. Working from home, as I've done for 25 years, I don't plan to contribute to Bellingham's rush hour much. But even the fact that some locals call it a 'rush hour' is kind of adorable.”

Catalano gets the frustration, though: Rush hours are relative, depending largely on one's experience. And as a newbie, he feels an obligation to not make the problem worse by joining lines of cars during peak times.

“I will do my mindful best not to contribute to rush-hour traffic in Bellingham,” he said. “I'm willing to make that sacrifice to be a good new Bellinghamster.”

But not everyone has that freedom, or is willing to make that choice. 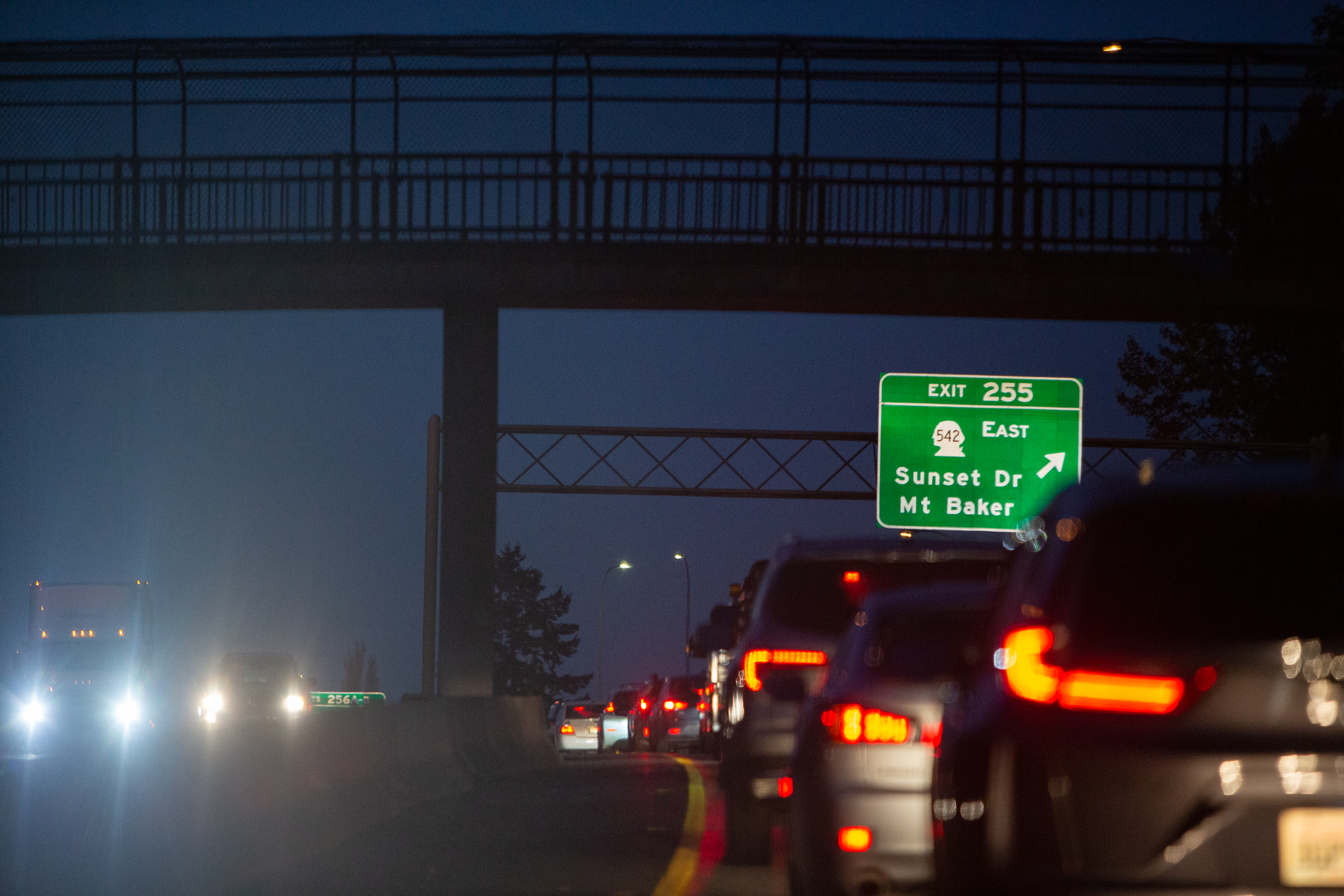 A line of cars head north on I-5, passing the often-traffic-clogged Sunset interchange in Bellingham in October 2021. (Hailey Hoffman/Cascadia Daily News)

Some public traffic gurus say there’s probably no going back to the days of local jam-free zipping around, saying it's every resident's choice, to some degree, to be in a backup.

Bellingham’s transportation planner, Chris Comeau, frequently points out that people stuck in traffic need to consider that they are the traffic, especially when rush hour is concerned.

“If everyone wants to be on the road at the same time, that is a choice,” Comeau said. “We can’t tell people where to drive, but there are always alternative routes available.”

He suggests the solution to Bellingham traffic won’t be found in personal vehicles, but by making walking and biking more accessible in high-congestion areas.

“As the city grows, there are going to be more vehicles on the road,” Comeau said. “So if there is a question of if Bellingham is going to continue to experience traffic, the answer is yes.”

That's not likely to win him many fans among brake-tapping locals. But there's no denying the numbers.

We are the traffic

Whatcom County’s population has seen a steady rise since 2010, increasing by 14% according to the 2019 U.S. Census. An increasing population may be good for the local economy, but the downside makes its presence known directly on local pavement.

Not surprisingly, the county has also seen a steady rise in annual vehicle miles of travel, according to its most recent Annual Traffic Report. From 1990 to 2016, urban highways in Whatcom County have seen annual miles traveled leap from about 13.5 million to more than 22.7 million.

And because of traditional, 9-to-5 work scheduling, too many of those people are single-driver commuters fighting through choke points not only to get across town, but onto I-5, via a system of onramps and offramps designed to handle levels of traffic from decades ago.

Key choke points thus are arterials and frontage roads leading to the city’s Sehome, Iowa/State Street, Meridian, Sunset and Bakerview freeway interchanges, as well as other routes between schools, employers and residential enclaves.

The Whatcom Council of Governments’ 2019 traffic count report shows congestion on Lakeway Drive — a primary commuter route to and from Sudden Valley and other Lake Whatcom neighborhoods — nearly doubling in recent years on some stretches of the four-lane thoroughfare.

The city does try to walk its traffic planner's talk. City employees are discouraged from single-vehicle commuting, said Janice Keller, communications specialist for the City of Bellingham.

“The city has a strong commitment to providing their employees with alternatives to driving alone to work,” Keller said, noting that Bellingham provides employees with carpool assistance, bike route planning and free quarterly bus passes.

Many city workers still work a traditional daily schedule, cutting down on any commuter “choice.” But the city does provide the option of telecommuting for employees who can work from home, Keller said.

“There are so many different positions within the city, it would be hard to have a detailed blanket policy for adjusting schedules to avoid traffic,” Keller said. “Though many positions are flexible and can be managed within each department.”

Regional government groups have tried to adjust. The Whatcom County Council of Governments created a Technical Transportation Advisory Group (TTAG) to address the increase in traffic congestion. The group analyzes issues and asks for funding from the federal government for planning projects.

Bob Wilson, executive director of Whatcom County Council of Governments, said TTAG is technically a metropolitan planning organization, which makes the group's classification fall under a federal entity. With TTAG having federal recognition, the group makes recommendations for funding allocation under projects that fall within the regional transportation plan.

TTAG is just advisory though, Wilson said. While recommendations can be made, all approvals are passed by a transportation policy board during public meetings, he noted.

“So TTAG doesn’t have any real authority, but we use our meetings as an opportunity to exchange a lot of information,” Wilson said. “We are able to make planners aware of various federal requirements.”

Bellingham's Comeau points to the city's 2012 Pedestrian Master Plan, which encouraged residents to do more walking, biking and bus riding.

But in some cases, those upgrades have led to the elimination of vehicle lanes, setting off even more grumbling from motorists. Many complain that swapping vehicle lanes for bike lanes has contributed to the new commute jams. Cyclists, they say, still seem few and far between on some major routes, especially during the city's trademark dark, wintry season, when cycle commuting can be construed as downright dangerous.

And the number of vehicles in those reduced lanes keeps increasing.

Western currently has a 58% drive-alone rate among its employees, Trinkaus said, which is not quite hitting the mark of what Washington state would like to see. And the daily incoming and outgoing tide of commuters at the 16,000-student campus is a major contributor to the city's rush-hour phenomenon.

“For students the rush to campus tends to start around 9 a.m. and fall off around 3 in the afternoon,” Trinkaus said. “But employees can have a harder time getting around traffic due to their schedules.”

Western provides trip-planning assistance and heavily encourages employees to choose biking or walking as a means of traveling. But it's a challenge.

“Our society is set up for driving a car,” Trinkaus said. “Folks have to be pretty dedicated if they are going to commit to not driving as their initial means of transport.”

In addition to a subsidized bus pass price of $23 annually for staff, Western also provides a bike-commuting fitness course. The course is designed to help staff navigate an efficient cycle commute.

Many commuters who have learned to leave cars at home find taking the bus the most practical year-round commuting option.

Maureen McCarthy, community relations and marketing manager for WTA, said that even with rising traffic loads, the county bus system has remained as consistent as possible, with a COVID-19 caveat of course.

“After the initial impact of the pandemic, our ridership was quite low,” McCarthy said.

McCarthy said when people began to feel safer in public places, WTA began to catch up to the demand of people using the bus system for consistent transit. Roads with an influx of ridership demand, like Lakeway Drive, Cordata Parkway and Sunset Drive, now have an additional bus line that comes every 5 to 15 minutes.

“What WTA has done, in partnership with the city, is to really try to reduce congestion and make public transit an attractive alternative by providing more frequent service,” McCarthy said.

Another method to help WTA remain on time is the controlling of traffic lights to turn green for a short moment if a bus is at the front of traffic. That way buses can jump the queue and continue their route, McCarthy said. This signal priority is not on the same level as that used for emergency vehicles, but the slight edge goes a long way in the ability to continue service.

For some drivers, such as delivery services and, especially, emergency crews, traffic has a more serious impact. But it hasn’t translated into life-threatening emergencies to date.

With the assistance of signal priority, emergency response times are not dramatically impacted by an increase in traffic, said Kenneth Cunningham, president of Local 106 Bellingham Firefighters Union.

“Traffic may impact our response by a few seconds, which is obviously critical if responding to a call for cardiac arrest,” Cunningham said. “Luckily there are policies put in place by the city to help mitigate any issues we may face in this regard.”

Cunningham said since stations are positioned strategically around the city, they are never too far from any given crisis.