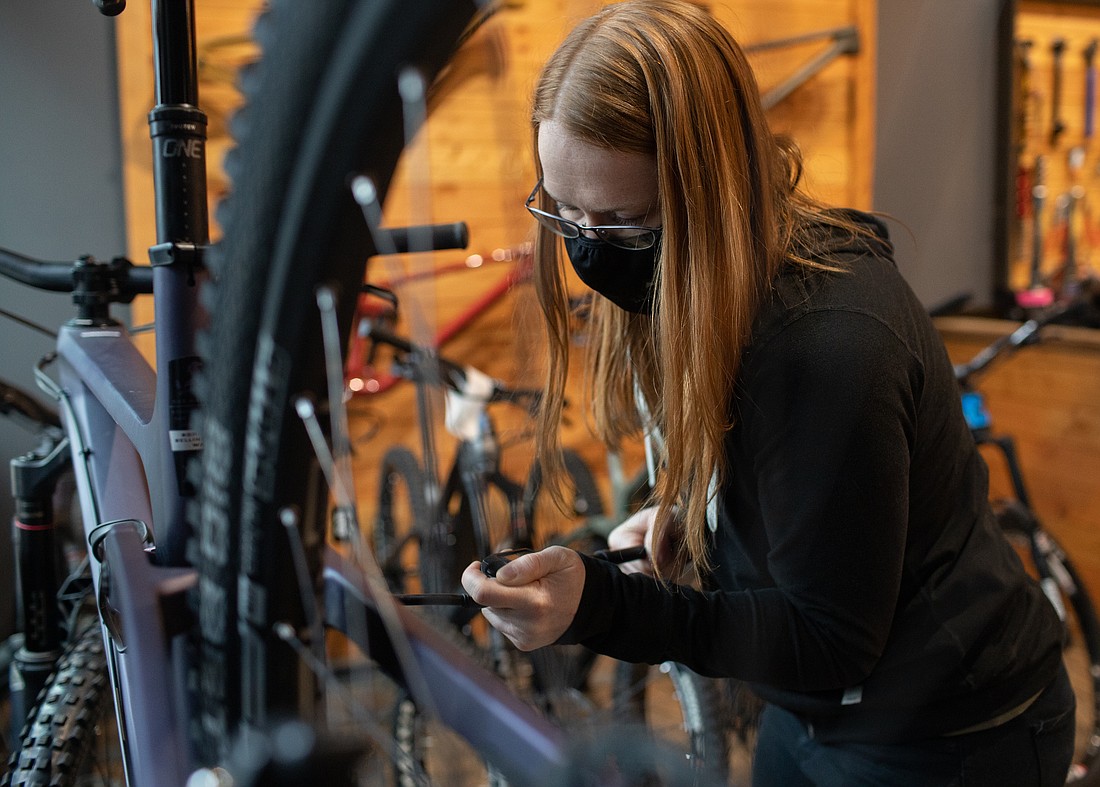 For an idea how big mountain biking has gotten here, don’t go to the mountains. Look at the cars.

They’re spilling onto the highway at Galbraith Mountain (a new parking lot should help) and cramming into hiking trailheads. Racks protrude from vehicles of all types: two-door economy vehicles, the family SUV, $100,000 Sprinter vans, pickups.

You don’t even need a car to experience bike heaven. At the downtown waterfront, a massive pump track — where riders pump their arms and legs for momentum — has become a big local hit, a surprise spectacle built when development stalled on Port of Bellingham property.

Constructed by advocacy and trail-building group Whatcom Mountain Bike Coalition (WMBC), it draws all ages, skill and bike types for a free ride. 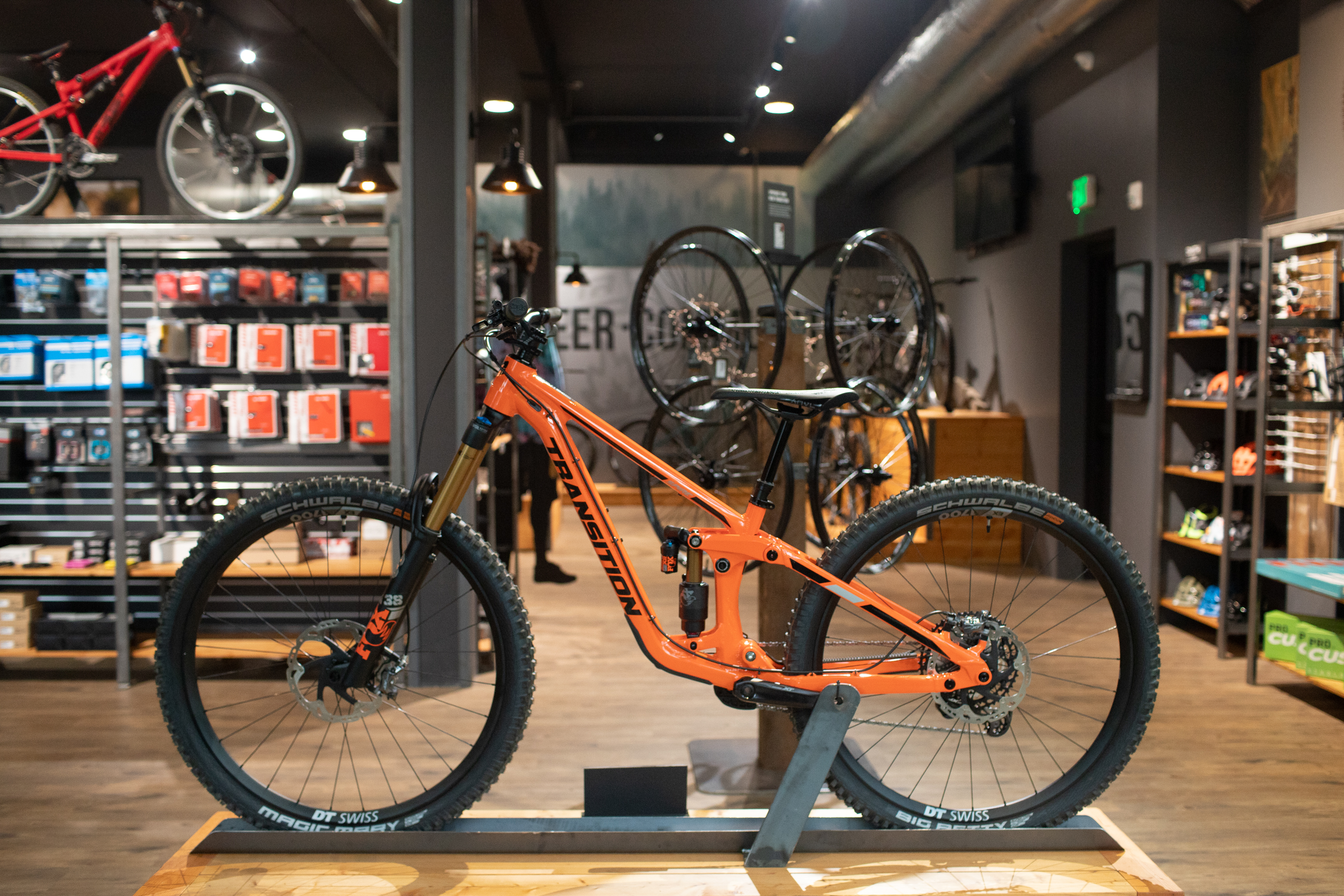 An orange mountain bike is on display at Transition Bike Co. near Galbraith Mountain southeast of Bellingham. The outpost sells bikes, other gear, accessories and beer. (Hailey Hoffman/Cascadia Daily News)

Mountain biking’s growth shows Bellingham’s emerging emphasis on recreational tourism as an economic driver. It puts Bellingham on the map for more than Mount Baker Ski Area’s prodigious snowfall and the annual multi-event Ski to Sea relay race, along with other outdoor recreation.

It’s also a big business that has spawned a community of artists, manufacturers and innovators producing everything from custom bike fenders to bike bags to components like handlebars and stems. Freehub Magazine, with its high-quality photos and writing, is based here. The vibe — bolstered by big-tree, mossy Pacific Northwest forests, loamy dirt, a strong community ethic and quality trails with plenty of (bent) elbow room — is like nowhere else, riders say.

“Between that and the beer,” said John Hughson, an engineer at Samson Rope who moved from bike haven Fruita, Colorado in 2019, “it’s kind of hard not to be here.”

From insiders to outsiders

It wasn’t that long ago that mountain biking at Galbraith was something of an insider club consisting mostly of hard-core enthusiasts. But Bellingham soared to destination status after timber company Galbraith Tree Farm, LLC struck an unusual agreement with the WMBC: You can ride while we’re logging trees.

“It’s rare there’s a timber company that allows bikes to ride around on their property while it’s a live timber company, to orchestrate and communicate when sections are closed to logging or spraying,” said Todd Elsworth, Recreation Northwest director. When the city and Whatcom Land Trust pitched in to purchase conservation easements in 2018, it meant Galbraith would be open to the public in perpetuity.

Then came the pandemic, prompting multitudes to garages and crawl spaces to dust off their bikes.

Pandemic brings out the bikes

“There has been explosive growth in mountain biking in general and COVID definitely sent that into the stratosphere,” said Mike Storm, owner of Intrinsic Flow, a coaching and guiding company. “The last five years has been [big] here.”

That will show July 8–10 when the waterfront hosts the 2022 NW Tuneup Festival, a new event with bikes, beer, music, races, rides and more for all ages. A showcase for the pumptrack, Galbraith and the local mountain bike industry, the idea grew from the success of Whistler’s annual Crankworx, a 10-day bike-a-palooza that draws more than 300,000 people and produces the town’s largest economic impact of all its major events, said Mike Hogan, Port of Bellingham public affairs administrator.

Additions to the popular trackside container village this season, starting in March, include bike rentals; local burger joint The Filling Station; a coffee and pastry shop operated by The Dish Foundation, which employs people with intellectual and developmental disabilities; and a grand entrance.

Bellingham’s Angi Weston used to travel nationwide to coach clinics. Now most clients come to her. Her annual Queens of Dirt Women’s Weekend draws about 80 riders, most staying in local hotels and Airbnbs. “It’s becoming such a destination for people,” she said.

“It doesn’t stick to anything,” Hughson said. “Here, you just hose it off and lube your chain.”

Volunteer trail parties, regularly hosted by WMBC, are embedded in the local culture and business community.

Even on miserable days of cold and wet, “we hold a trail day and 50 people show up,” said Bill Hasenjager, WMBC adviser. Through the Trail Adoption Program (TAP), businesses pay from $500 to a couple thousand dollars, depending on sweat equity, to keep trails maintained on Galbraith.

“We’re seeing this ethic and value of stewardship being taught and shown by example,” Elsworth said.

Mountain biking and outdoor recreation holds such appeal that employers are using it as a recruiting tool. Since 2019, Samson Rope made five hires, including engineer Hughson, said Patricia Boteler, Samson Rope talent and engagement manager. “It's definitely something that is bringing new talent to the area,” she said.

After 11 years in Seattle, international bike manufacturer Evil Bikes moved here in 2019 for Bellingham’s proximity to trails, living affordability and relatively low crime. Now, 13 of Evil’s 17 employees live in Bellingham. “We’re all transplants,” said Jason Moeschler, Evil chief operating officer. “None of us lived here before.” Moeschler said he expects Evil’s 45,000-square-foot Fairhaven facility to max out in two years. “We will look for more space for warehousing and manufacturing,” he said. 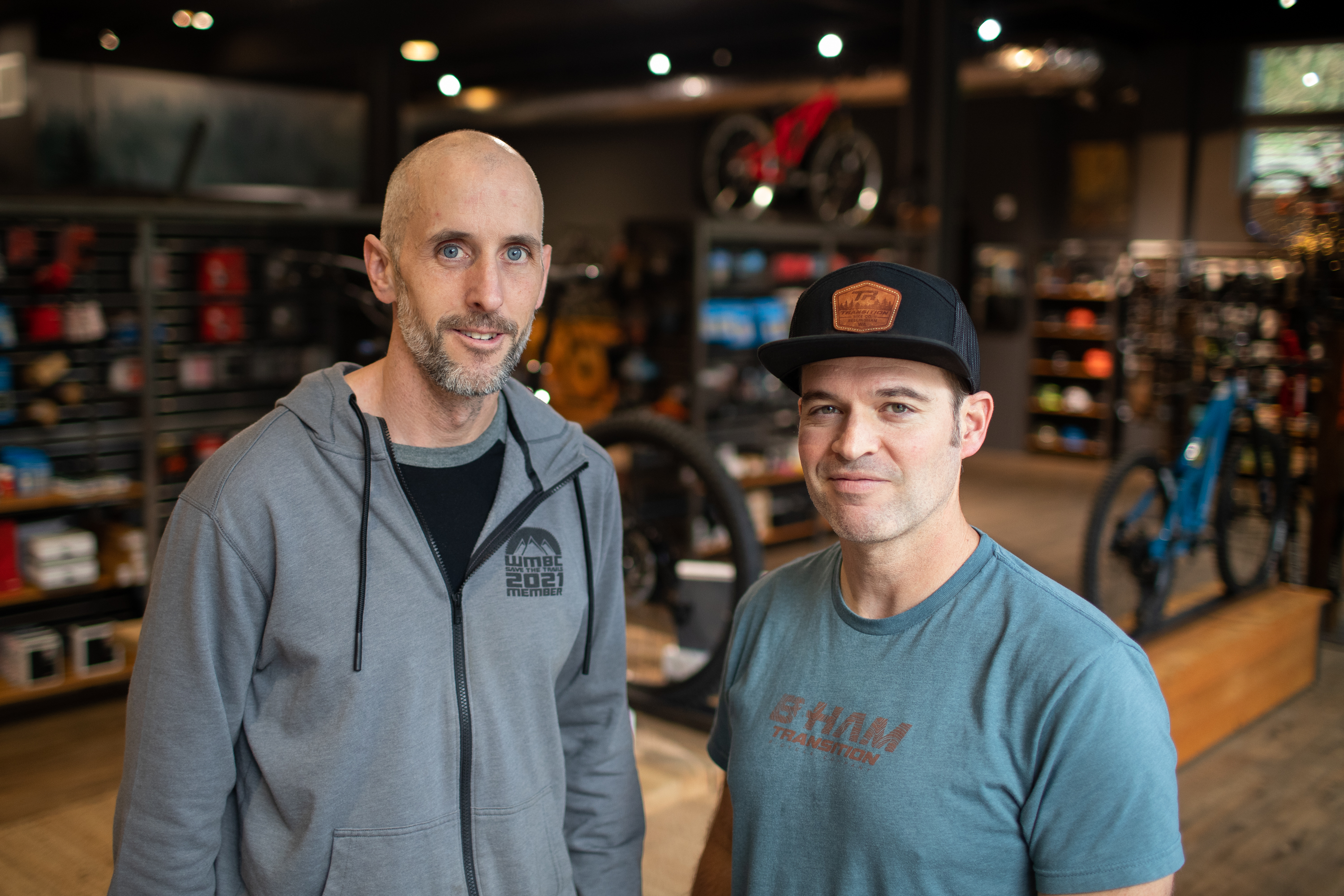 Evil joins mainstays Kona (here since 1988) and Transition Bike Co. Transition owners Kevin Menard and Kyle Young grew up together in the Seattle area. Now they’re fixtures in the Bellingham bike community, after moving the company from Menard’s basement even before the brewpub boom. “We were here when there was just Boundary Bay,” Menard said. With the July 2021 move from a smaller shop to their Transition Outpost bike store on Samish Way, they’re realizing a dream: 40 employees, a 20,000-square-foot space with beer taps, an adjacent lot for development and offices close to Galbraith’s southern trailhead.

Mountain biking keeps on rolling. More pumptracks and trails are in the works, including some 45 miles of trails planned over the next decade on Lookout Mountain, managed by Whatcom County Parks. Young says the bike business is notoriously cutthroat, but says there’s enough to go around.

When Evil came to town, Transition hosted a welcome group ride and burger lunch. “Yeah, we can be competitive,” Young said. “(But) I really believe the pie is big enough and we shouldn’t be worried about taking other slices. We should be worried about building bigger pies, right?”

An Earth Economics study released in 2020 (from pre-pandemic 2019 stats) showed:

Correction: This story was updated to correct numbers from a study estimating economic impact from outdoor recreation in Washington state.
Have a news tip? Email newstips@cascadiadaily.com or Call/Text 360-922-3092