Bikers rejoice as new parking lots are added to Galbraith

On a sunny afternoon last fall, Bellingham mountain biker Jack Hilt found a pocket of time in his busy day to catch a couple laps at Galbraith Mountain. Searching for parking among the hundred other cars parked alongside busy Samish Way, his heart stopped as he watched the driver of a truck in front of him slam on the brakes just in time to miss a little girl on a bike who had popped out from behind the row of cars. Hilt took a deep breath as he slid into the parking spot behind the rattled family and got ready for his own ride.

His experience was not unusual at Galbraith, Bellingham’s increasingly popular mountain-biking hub. City officials have responded by planning, and now building, an extensive off-road parking lot.

“Quite honestly, I feel like if we can get this new parking lot built before somebody actually gets injured, it will be kind of a miracle,” said the city’s project specialist Josh Neyman. “It’s just such a dangerous place to park, so this is really necessary.”

Samish Way is a two-lane county road leading to southbound I-5. Samish passes by one of Bellingham’s most popular parks, Lake Padden, and nearly 3,000 of Bellingham’s residents live in the Samish Hill community. 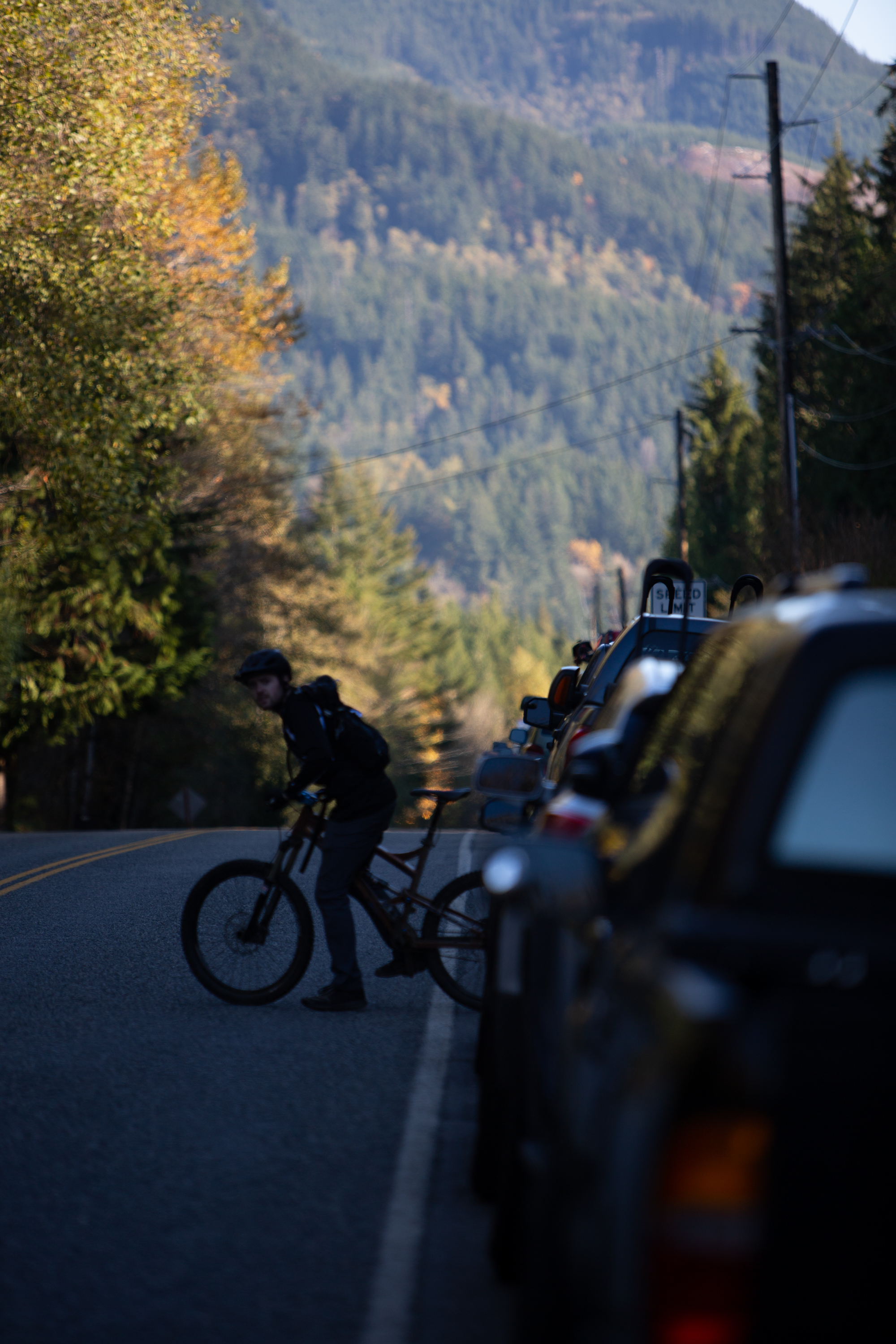 Galbraith Lane, one of the many trail access points through town, is adjacent to Samish. Hundreds of bikers travel there daily and spend the initial part of their adventure trying to claim one of the 30 available parking spaces. Those who miss out have been forced to park on the side of the busy street right above a steep ditch.

The new parking lot is being constructed in three phases. Phase one and two have been completed, but the project team has been waiting for the wet season to pass before they begin the final phase. Phase one started in September 2021 and included clearing trees and stumps within the lot. Phase two, during quieter winter months, doubled the original parking lot to about 50–60 spaces. The rest of the lot is now fenced off waiting for the final phase to start in March 2022.

The Whatcom Mountain Bike Coalition (WMBC) expects the expanded lot to be done before the busy summer months, ideally by the end of April.

The WMBC started raising money in 2017 for the new parking lot, located on the south side of Samish Way across from Galbraith Lane. The lot will include bathrooms, kiosks with maps and trail information, and a crosswalk across busy Samish Way. The goal to raise $540,000 to fund the project was accomplished after 879 people and institutions made donations and $79,000 was donated in professional services.

“I think that while the new parking lot is overdue, it’s a great idea,” Hilt said. With the old parking setup, “you have people putting on their gear 2 feet away from the street,” Hilt said. “People have dogs and little kids running around, and even as a driver it is hard to always see these people tucked behind the rows of cars.” 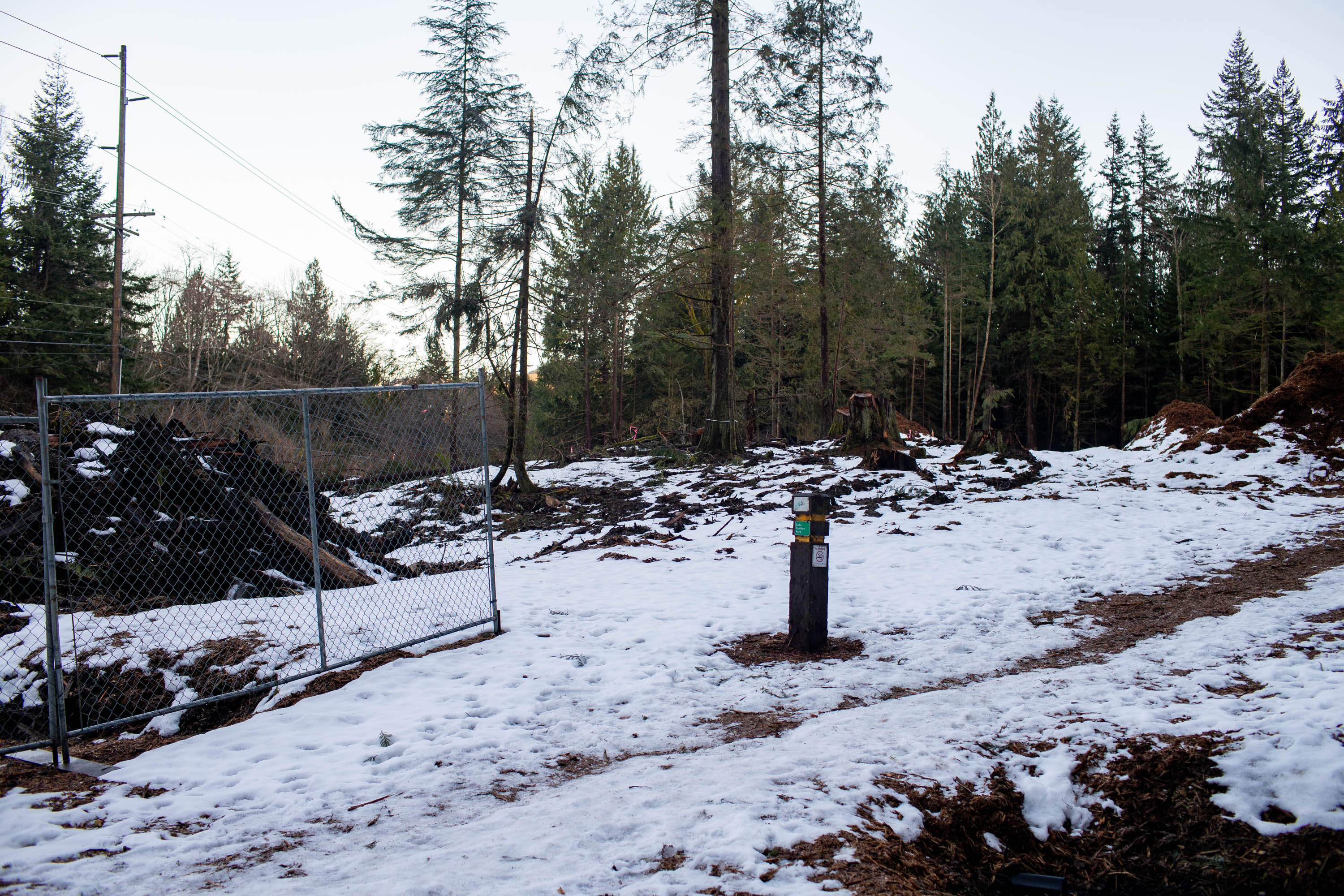 A new parking lot at Galbraith is in construction to provide more parking at the popular mountain bike spot. (Hailey Hoffman/Cascadia Daily News)

Safety was the main motivator for the parking lot initiative. WMBC Executive Director Eric Brown estimates on a sunny Saturday approximately 2,000 riders flow in and out of the trail systems, with about half coming from the south side of the mountain on Samish Way.

Public records requested by the Cascadia Daily News show since 2013, the 2.2 mile stretch of Samish way adjacent to Galbraith Lane has had 1,019 traffic infractions and 24 accidents. In 2015, coalition members worked with Whatcom County to reduce the speed limit on the section of Samish Way passing by Galbraith from 50 mph to 35 mph.

Samish Way resident Tod Loeffelholz, who has a trail from his back door into Galbraith, is in full support of the parking lot. He even donated to it, saying it will ease the traffic and terror on the road he drives daily.

“I have had a couple very close calls,” Loeffelholz said. “Even when you’re going 20 mph, I have still had kids come out of nowhere and jump out into the road and scare you. Really gets your heart pounding a bit.”

The coalition's director Brown says his fears about the dangerous parking situation are heightened during meetings of youth mountain bike clubs. On Wednesdays, during the dry season, club members from groups such as the all-girls Flying Squirrels get dropped off at one of the small parking lots to go into the woods. With almost 100 kids getting dropped off, things get hectic pretty quickly. Parents run out of space to park, so they park down the road, and end up walking their child along the busy road.

“I help run my daughter and son’s bike club and dealing with [the street] is the scariest part of the whole ride,” Brown said. “The actual rides themselves are delightful. The getting in and out of the parking lot and getting kids across the street where there’s cars parked all along the shoulder, are the tensest parts of the whole experience.”

With all of the new trail users, trying to find ways to divert all the use and pressure on concentrated areas of the land is something Brown plans to work toward in the future.

With the parking lot project nearly completed, Brown is excited to pivot from building parking lots back to building new trails. With the help of the community’s volunteers, Brown plans to start new projects on new mountains, the soonest being developing trails up off the Y Road on Stewart Mountain.

“You’ve got new people coming to the sport, new people to the area, and everyone’s feeling it,” Brown said. “Ideally what we’re going to do is continue to build out other trial networks.” 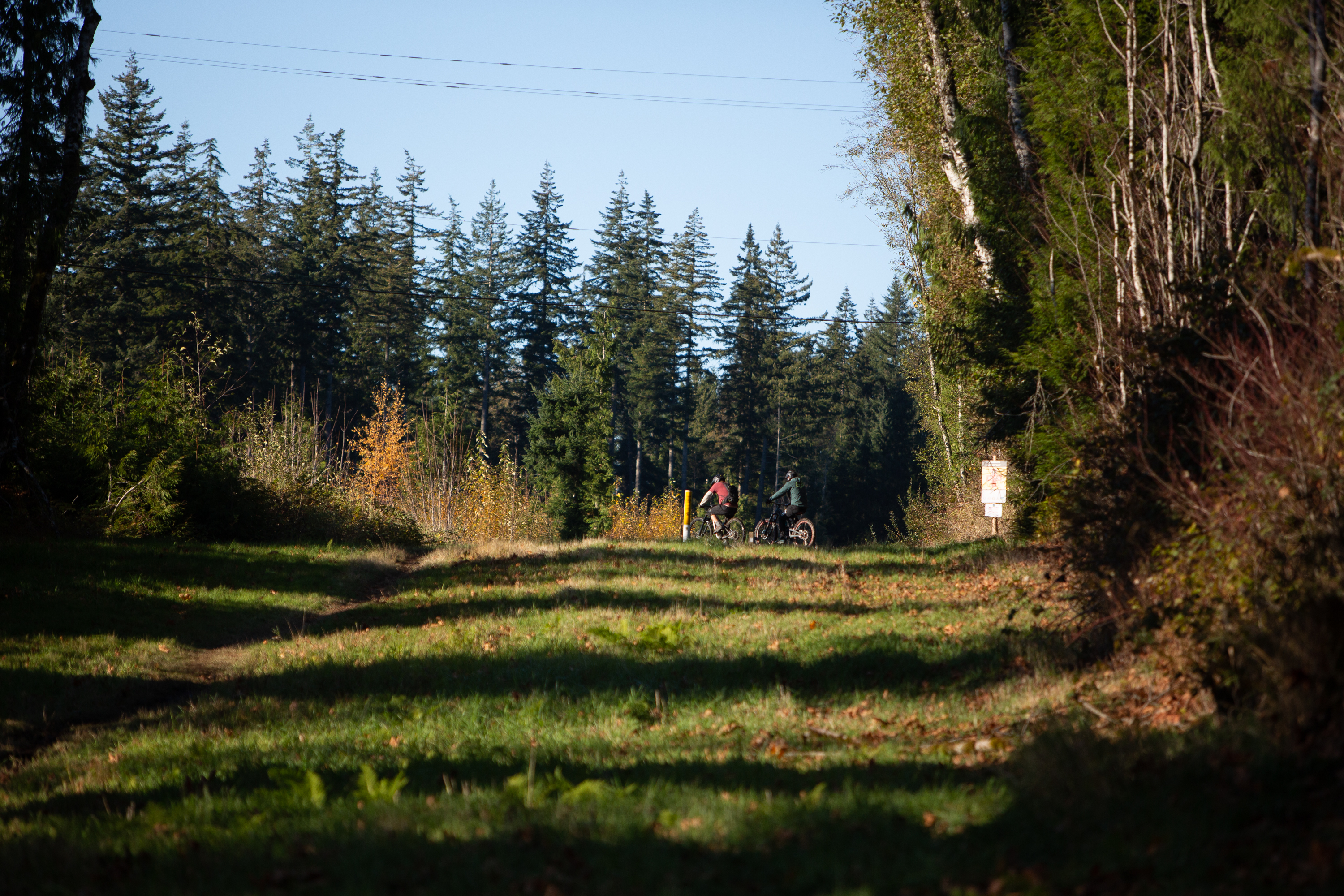