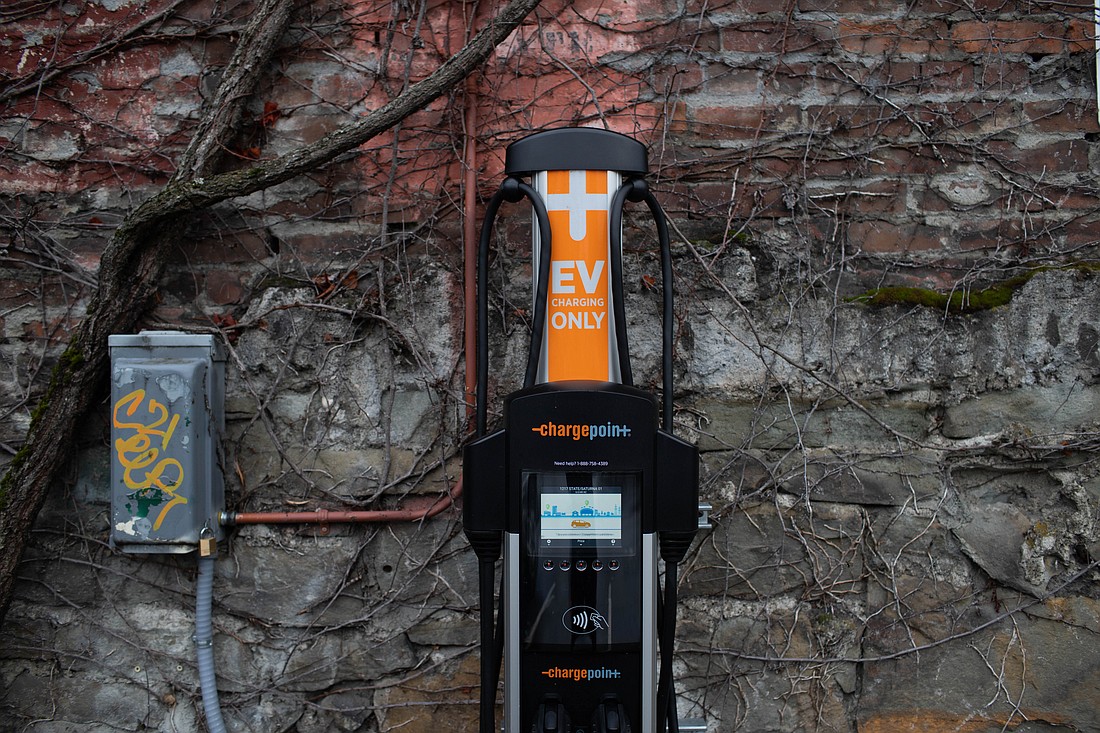 More than a dozen climate-related initiatives have been introduced during the current legislative session, which began on January 10. Several proposals have already been referred to the House Environment and Energy committee and the Senate Environment, Energy and Technology committee.

"There's the money part of this, and there's the policy part of this," Ramel explained. The legislature is using the governor's budget proposal as a "first draft" of the budget that will be finalized by the end of the legislative session in March.

“We passed a law that Washington state is actually required to reduce greenhouse gas emissions by 50 percent by 2030, and then get to net zero [emissions] by 2050,” said Anna Lising, Inslee’s senior policy advisor on energy. “We realistically can’t do that without decarbonizing our transportation sector.”

The state is not on track to reach its 2030 goal, with current forecasts estimating a 25% decline in emissions, according to the Washington State Department of Ecology.

Currently, transportation is the number one source of greenhouse gas emissions in the state, accounting for 44.9% of emissions in 2018, the latest data available from the state Department of Ecology shows. 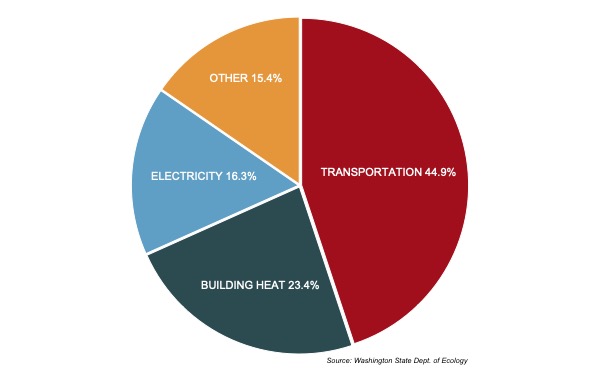 Transportation tops the list as Washington's largest source of greenhouse gas emissions, according to the latest data available from the Washington State Department of Ecology. (Julia Lerner/Cascadia Daily News)

The state already has incentives in place to encourage buyers to make the switch to zero-emission vehicles, including sales tax exemptions, though these alone have not been enough to convince drivers to make the switch as fast as the state needs to meet emissions goals. Inslee’s 2022 proposal includes additional motivators, including an annual $100 million for customer rebates, reducing the upfront buying costs of electric vehicles.

The proposed rebates would include $7,500 for new and $5,000 for used battery electric vehicles and fuel cell electric vehicles, as well as $1,000 for zero-emission motorcycles and e-bikes.

Electric and zero-emission vehicles and can cost anywhere from 10% to 40% more upfront than a similar gas-powered vehicle, a cost analysis from Consumer Reports shows.

“Point-of-sale rebates have become the standard for EV sales incentives nationally and have been adopted by Oregon, California, Connecticut, Massachusetts, New York, Pennsylvania and Texas,” according to the governor’s Proposed 2022 Supplemental Budget and Policy Highlights document. “The Department of Commerce will oversee the rebate program for the purchasing or leasing of new or used electric vehicles.”

In addition to encouraging consumers to buy electric vehicles, Inslee has implemented an executive order to make the state’s fleet of vehicles 100% zero-emission by 2040.

“Moving our vehicles very quickly off of fossil fuels is absolutely critical to reducing our greenhouse gas emissions,” Lising said. “This is a really strong policy for us to be able to make sure that we are getting to zero emission vehicles that are powered by clean, renewable energy.”

The state received some pushback for prioritizing electric vehicles and car infrastructure over other models of transportation, including public transit like buses and subways.

“I don’t think it’s particularly helpful to be fighting with each other over limited resources when we should just be revisiting how we are investing in transportation broadly,” Lising said. “When folks get hyper focused on one specific thing, they’re not paying attention to the broader picture of how all these policies are interconnected and work together to actually move us to a cleaner and more equitable transition.”

Currently, the emissions that come from residential, commercial, and industrial buildings account for 23.4% of greenhouse gas emissions each year, the second-largest source in the state following transportation.

“It’s primarily from the fossil fuels and natural gas that’s used to provide space and water heating for our buildings,” Lising said. “We are heavily investing to make sure that our new buildings, new construction are more energy efficient, they’re using less energy, and that the energy they’re using is coming from clean, renewable energy and moving off from natural gas and fossil fuels. We also have a lot of work to do with our existing buildings.”

Inslee’s policy proposals include legislation targeting new construction, as well as retrofitting existing buildings. All new construction will have to meet a “net zero ready” requirement, meaning each project will reduce energy use by 80%, uses all-electric appliances and equipment, is solar-panel ready, and has electric vehicle charging stations and battery storage beginning in 2034.

Ramel also has proposed that future building codes require new construction to be at least wired for solar panels.

“We have to make sure that when we’re making improvements in buildings, that the cost of those improvements doesn’t make housing unaffordable to the folks who can least afford it.” — Rep. Alex Ramel

“The impact on tenants and small businesses and low income houses, from these bills, is important,” he said. “We have to make sure that when we’re making improvements in buildings, that the cost of those improvements doesn’t make housing unaffordable to the folks who can least afford it. We have included a prohibition so that if your landlord takes money to improve your building from these incentives, they’re not able to turn around and use that as a justification to increase rents.”

Workers in trades industries, too, have expressed concerns about the building proposals. Individuals who install gas pipes, or those who work with fossil fuels in construction, are apprehensive about job loss.

“I believe that the way we’ve crafted this supports a gradual transition,” Ramel said. “Ultimately, what we're talking about doing is a lot of work to improve buildings. So if you're in the construction and maintenance industries, this is, broadly speaking, good for those industries.”

“One of the bills allows consumer-owned electric utilities to encourage their customers to switch from dirtier fuel sources to clean and efficient electric sources,” Ramel said. “Another requires the gas companies to develop a clean heat plan to show how they’re going to meet their share of our greenhouse gas reduction targets.”

Though there are no consumer-owned electric utilities in Whatcom, Inslee hopes to fund other local projects, including a proposed restart of the shuttered Alcoa Intalco Works aluminum smelter in Ferndale. When fully operational, the project, which could receive $7.6 million through the Clean Energy Fund, should reduce greenhouse gas emissions by at least 750,000 tons per year from previous levels, as well as create manufacturing jobs in the county. If not used by June 30, 2025, that money would be used for other clean-energy investments.

Port of Bellingham officials recently have discussed several proposals to restart the aluminum plant or convert it to a steel mill, replacing the 700 manufacturing jobs lost when the plant closed in 2020.

Though the proposed changes are gradual, Ramel says the time to act on the impending climate crisis can’t come fast enough.