A landslide of uncertainty at Petrogas Ferndale 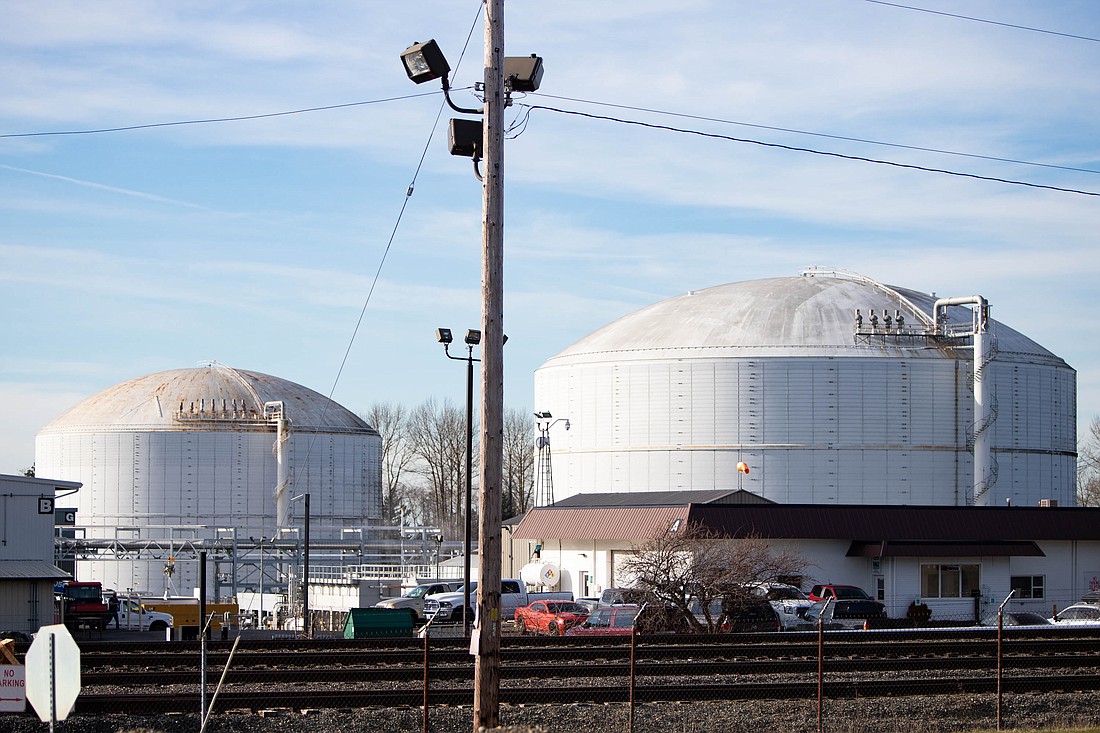 A December landslide near two large chemical storage tanks at Ferndale Petrogas unleashed a flurry of questions about safety at the only liquified petroleum gas export terminal on the West Coast.

The facility, already under intense scrutiny following years of unpermitted expansion, took another hit in December when floodwaters overwhelmed a storm management system during a landslide near the property. That failure potentially put massive chemical storage tanks at risk, according to recent communications between state regulatory agencies obtained by Cascadia Daily News.

The Dec. 3 landslide impacted close to a mile of land between the Petrogas facility and the Phillips 66 refinery. Bluff failures were recorded within just 200 feet of Petrogas storage tanks, which house over 100 million pounds of liquid butane and propane. 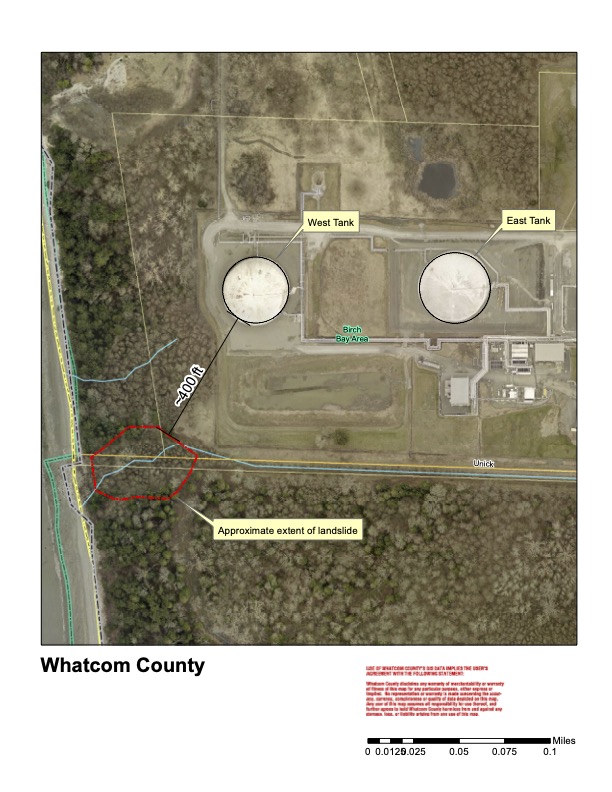 An aerial shot of the Petrogas storage tanks in relation to the landslide that occurred on Dec. 3, 2021. (Photo courtesy of Andy Wiser/Geohazard Specialist, Planner Whatcom County Planning and Development Services)

In the weeks following the landslide, emails from the Washington Department of Ecology (DOE) and the state Department of Natural Resources (DNR) painted a grim picture of the event.

“Around Dec. 3, a crack on the bluff developed, which is about ½ to ¾ miles long and is threatening a large Petrogas storage tank,” according to a Dec. 15 email from Jase Brooks, a legislative and strategic policy analyst at DOE, obtained through records requests. “A complete catastrophic failure of the bluff could impact operations at P66’s (Phillips 66) marine terminal.”

Catastrophic failure, according to Brooks’ email, would result in fire and explosion at the facility (Petrogas), with risks increasing considerably because of the highly flammable chemicals involved.

“Of particular concern is the oil tank on PetroGas (sic) property that is situated close to the bluff, within about 100 feet of where ground cracks have been noted by county geologists, which would potentially create a spill hazard to Puget Sound upon failure,” said Jessica Czajkowski, DNR’s assistant state geologist, in an email to Ecology.

“The way this was reported to us was, ‘we think there’s a large landslide along this bluff,’” Czajkowski later told Cascadia Daily News. “When we were looking at the maps, we saw the tank, what I thought was an oil tank. There’s also a pipeline that goes along the dock, so we were concerned, given the sensitivities and all the unknowns.”

While stored separately in the tanks, the butane and propane take a liquid form, but if released or leaked into the atmosphere, they will return to a gas.

Though emails from DOE report that propane and butane are not toxic chemicals, they can still be dangerous.

“It can be an asphyxiant, which means that if you’re in a cloud of propane, you can asphyxiate because you don’t have any oxygen to breathe,” explained Carl Weimer, a former Whatcom County Council member and adviser at the Pipeline Safety Trust, a local nonprofit promoting pipeline safety. “The bigger fear is that the cloud would find an ignition source and the whole thing would blow up," said Weimer, who emphasized that his involvement is not part of his work with the pipeline trust.

Early assessments of the slide indicated it was only a couple of acres in size, but significant because it damaged the facility's stormwater outfall.

Wiser, the first geologist to review the site, conducted several surveys of the land throughout early December.

“Over time or during the rain events in November, the [stormwater outfall] became overwhelmed,” Wiser said. “The structure got clogged up with debris, so water started to go around the structure rather than into the structure.” 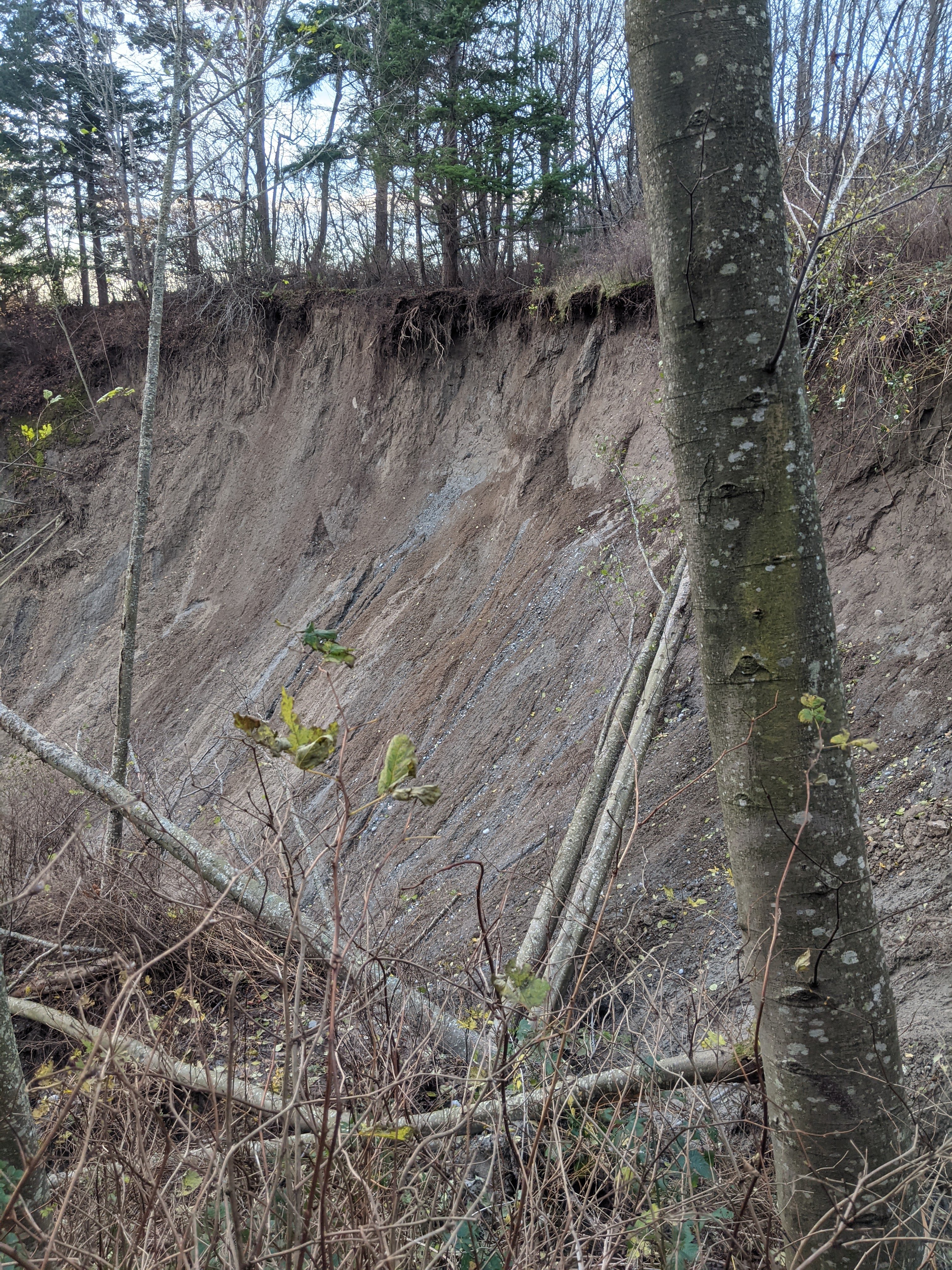 An assessment from Travis Linds, a field project engineer at Petrogas, was similar.

“The area west of the property doesn’t have any water flow, which is what caused the huge slide at Unick Rd,” his Dec. 21 email to DOE said. “The county debris grate for this outfall was plugged, which we feel further exacerbated the situation, forcing the water around the outfall.”

Wiser’s assessments found the landslide was shallow, meaning the bluff failure was just on the surface.

Following Wiser’s assessment, Ecology employees expressed concern about the safety of the site, though Wiser said there appeared to be no immediate danger to any of the surrounding properties.

“Subsequent inspections by the county and Phillips 66 has shown that the slide area is actually the entire bluff area stretching from Slater Road on the south to Intalco to the north,” according to Brooks’ email. “While this area is clearly a coastal bluff and erosion is normal, there are tension cracks in the soil from Unick Road area south to Creamer Road area.” 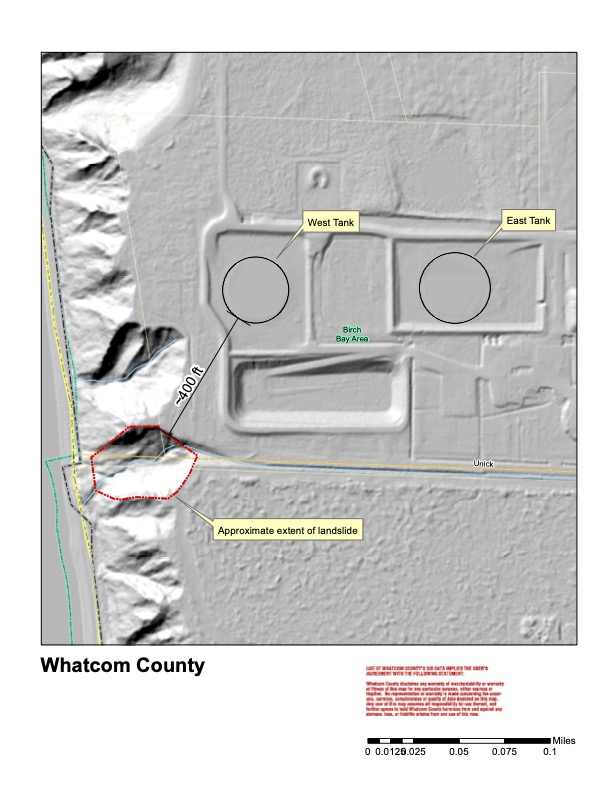 “The landslide affecting the bluff below Phillips 66 refinery (not threatening refinery), but is within 150ft of natural (petrol) gas storage tank,” Vance said in an email to Ecology. “Per John Gargett, it looks like an entire bluff failure about to happen. Already have 36 slides in that area with fissures at the top of the bluff.”

Gargett, Whatcom County’s Emergency Management Director, said his team reviewed the site with Wiser and collected aerial images with a helicopter in early December. The next day, the Washington Geological Survey sent a team of geologists to survey the landslide.

“It was a significant amount of area that did slide,” he told CDN. “They made the determination that it did not appear to be a continuing slide, and there was no immediate danger to any of the surrounding properties.”

Petrogas representatives pushed back against the characterization of the slide, calling it “misinformation” in emails to Ecology.

“I did want to verify that some of the misinformation in the previously attached report was clarified,” Linds, the Petrogas engineer, told DOE on Dec. 21. “The statement that ‘slide area is actually the entire bluff area stretching from Slater Road on the south to Intalco to the north’ is certainly not true.”

Linds maintains the landslide was small, and part of the natural erosion process along the banks of the Strait of Georgia. AltaGas, a Canadian energy infrastructure company that became the parent company of Petrogas in late 2020, echoed that argument in a statement issued to CDN in response to questions about landslide dangers.

“Through ongoing monitoring and assessments, changes to the area around the facility are proactively managed and additional mitigations are put in place if required,” AltaGas stated. “During design, facility siting assessments are completed to identify and mitigate hazards. This ensures facilities meet or exceed local safety and environmental regulations and are in safe locations, including our liquefied petroleum gas (LPG) tanks.”

Later assessments of the site have helped put immediate concerns to rest.

“We went out with Petrogas and Phillips 66 to assess the site and ensure that there was no hazard posed to the public or the environment,” said Trevor Contreras, landslide hazard geologist with the Landslide Hazards Program at the Washington Geological Survey. “It turned out there were just some shallow bluff failures that we typically see along the bluffs.”

Contreras said his team reviewed the photographs provided by Gargett and surveyed the facility, finding no immediate threats.

“Once our geologists went out and figured out it was not this big huge slope, the emergency seemed to be much less,” Czajkowski told CDN. “I’m sure it was a little dramatic, but I’m glad it was nothing. Better to be safe than sorry.” 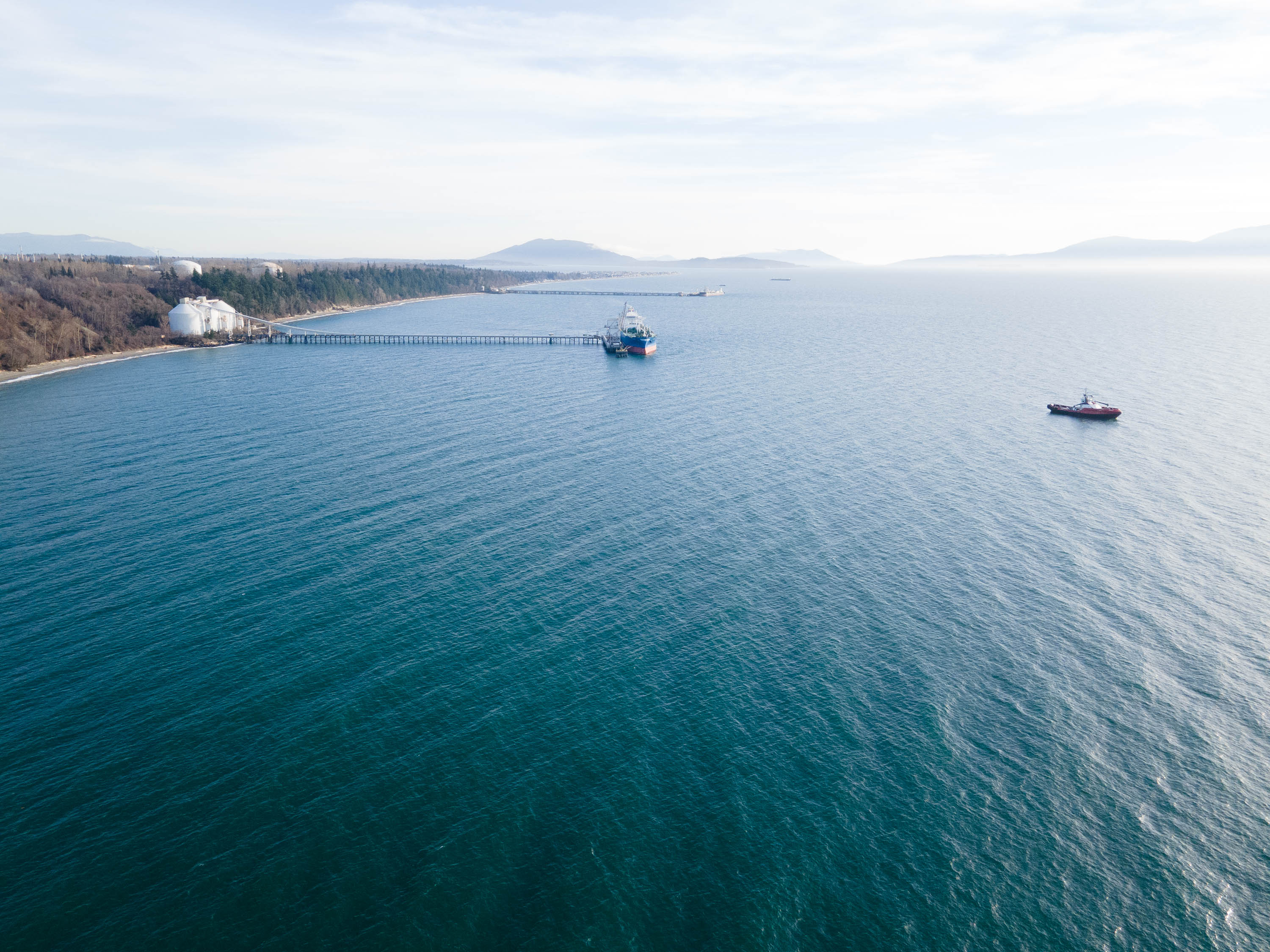 The Petrogas facility is located close to the Strait of Georgia in northwest Whatcom County. (Hailey Hoffman/Cascadia Daily News)

Despite assurances from AltaGas, Petrogas and, continued assessments of the site, concerns continue to swirl at Ecology.

“There are some discussions inside Ecology regarding the Petrogas liquified propane/butane storage terminal in Ferndale,” Kyle Masters at Ecology said in a Jan. 3 email. “Apparently one of their aboveground storage tanks sits close to the edge of a bluff that’s showing real signs of instability.”

Weimer said the hillside behind the Petrogas facility “has been sloughing off out there for years.”

“Certainly it’s an unstable hillside,” he said. “There’s probably 10 slides along the hillside, just between the end of the road and where their pier is that I saw that have been active in the last month or so.”

None of the regulatory officials interviewed by Cascadia Daily News were willing to comment on potential risks associated with the landslide and the facility, or potential future hazards such as additional flooding or earthquakes. It remains unclear which regulatory agency, if any, has overriding authority.

Both Petrogas and Phillips 66 plan to bring in their own consultants to evaluate the land and review emergency procedures at the sites, developing recommendations based on their own investigations, but did not comment on what those are.