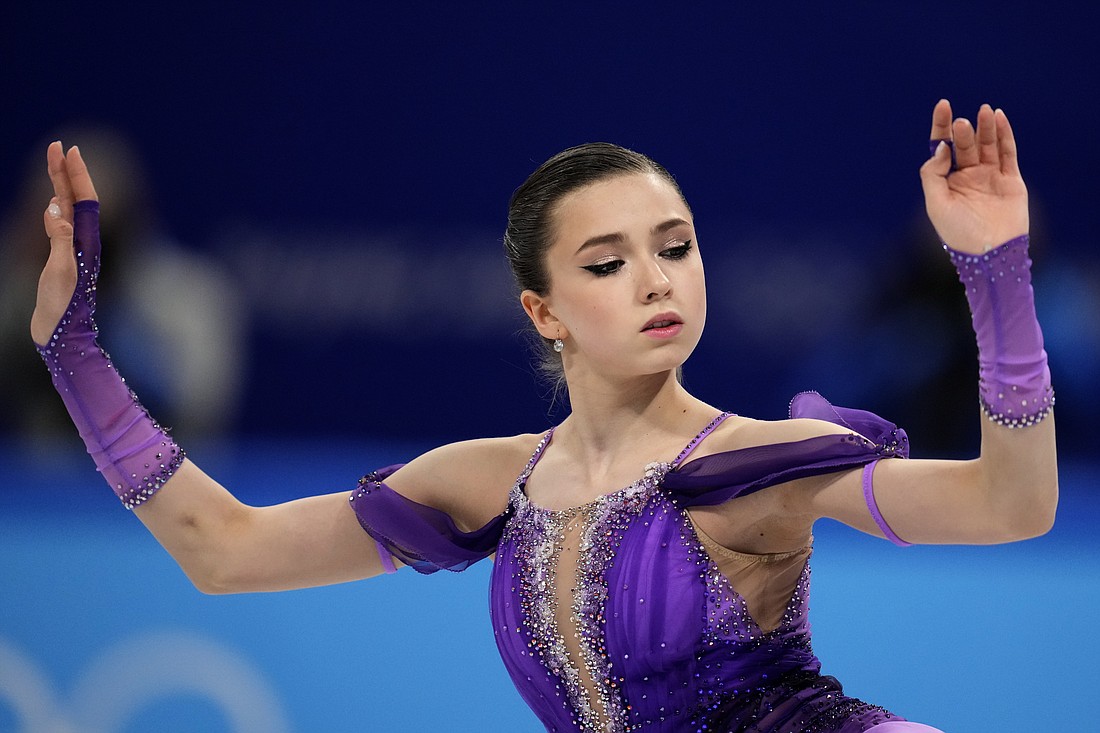 Oh Look!: Over in Beijing (motto: “You Say Human Rights Like That's a Good Thing”) they've substituted a new musical number for the Closing Ceremony's Olympic Hymn: “I Love a Charade!”

Just to Refresh: The Russians, the most blatant, systematic, institutionalized sports dopers in the history of the world (think: disgraced former baseball star Barry Bonds if his gigantic, dope-swollen head was its own country, which, in fact, it might be) completely rigged the 2014 Sochi Games, as documented by former doping agents now hiding in fear for their lives.

To Which the Justice-Dispensing International Olympic Committee Responded By: Levying a fine of six rubles and confiscating Russia's top ice dancers' plush flight slippers while jetting first class to Beijing to compete as usual, except without the inspirational benefit of ... their flag. The Horror.

Which: Will sure show them, right?

Suitably Humbled, the Russians Reacted By: Sending a 15-year-old figure skater so hopped up on performance-enhancing heart medications that she qualifies for her own U.S. pharmaceutical TV ad with a list of possible side effects approximately 114 minutes long.

Or as The Hammer Made Clear Long Ago: The entire sad affair has been rendered a farce, of true Senate-filibuster proportions.

Meanwhile, Directly Downstairs From Us: Jack's BBQ, the reportedly really good BBQ joint literally within The Hammer's building, has been promising to open since ... we wanna say December?

Yeah, Yeah, Yeah: So have we. So what's your point?

But Shoot: Well, even we got launched, so when does the smoke start rolling? Surely we will smell it before we see it, but the hot rumor is: March.

Note to Staff: NO, we will not have an open tab. Or a closed tab.

Speaking of Staff: It is very, very busy at the moment, prepping for the launch of our print newspaper, which will now debut on March 2 — not March 3 as once stated. That's right, change around your lives: We're going to put out the print CDN on Wednesdays instead of Thursdays, due to production issues and our strong desire for you to get the print paper in hand before the weekend. (More details to come next week.)

And That's a Big Deal Because: If you have the print paper in hand you can use it to wrap up your BBQ from Jack's should Jack's ever open. (The news kids are hungry, folks; help us out here.)

Important Get-Off-Lawn Road Repair Update: It's humbling to note that since The Hammer became The Yammerer a while back talking about the original Oregon Trail Wagon Train ruts in the pavement at the intersection near the Samish Way overpass, folks in charge have responded by immediately leaping to action to deliver a large order of ...  jack squat. Being a graduate of the Glacial Moraine School of Public Progress, The Hammer shall keep grinding away.